Abstract: Isolated basilar artery dissection is a rare vascular pathology with varied clinical presentations and prognoses. We report a case of a 54-year-old woman, presented with subarachnoid hemorrhages (Hunt-Hess grade II). Brain computed tomography demonstrated a perimesencephalic pattern of haemorrhage. Magnetic resonance angiography revealed an isolated basilar artery dissection. Conservative treatment was performed. A complete resolution of the clinical symptoms occurs over a period of 30 days. There was no recurrent haemorrhage. On a follow-up magnetic resonance angiography three months later, a complete resolution of the intramural haematoma in the basilar artery was demonstrated. Some of the cases of basilar artery dissection with perimesencephalic pattern of subarachnoid haemorrhages could have a good prognosis, and could be treated conservatively.

A 54-year-old woman with arterial hypertension of short duration was admitted to our hospital with a sudden severe headache followed by nausea and vomiting. The patient had no past medical history of headache or warning signs in the days or weeks preceding the symptom onset. There was no history of trauma or previous neurological disease. On neurological examination, a mild degree of neck stiffness without any other neurological deficit was found. The patient underwent a computed tomography of the brain that revealed a haemorrhage, located behind the clivus and along the basilar artery (Fig. 1).

Fig. 1. Computed tomography of the brain demonstrates haemorrhage in the prepontine cistern area (A) and along the entire basilar artery (B). 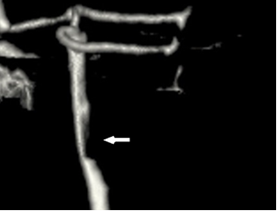 Fig. 2. Magnetic resonance angiography - an irregular narrowing of the lumen of the basilar artery. The outline of the vessel is interrupted by intramural haematoma.

Cerebrospinal fluid examination was consistent with subarachnoid haemorrhage. There was no evidence of thrombocytopenia or other coagulopathy, on laboratory bloodtesting. A conservative treatment with analgesics and anti-hypertensive drugs was carried out. A complete resolution of the clinical symptoms occurs over a period of 30 days. There was no recurrent haemorrhage. On a follow-up magnetic resonance angiography three months later, a complete resolution of the intramural haematoma in the wall of the basilar artery was demonstrated (Fig. 3). 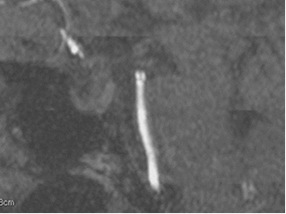 The severity of initial haemorrhage in the cases with basilar artery dissection is one of the main factors that strongly influence the outcome. More commonly, a massive subarachnoid haemorrhage with tamponade of large portions of the subarachnoid space occurs, being indistinguishable from that observed in the cases with aneurysmal bleeding [2]. Mortality of ruptured basilar dissection is high. It ranges from 30% [4] to 78.9% [5].

The outcome of subarachnoid haemorrhage due to basilar artery dissection is dependent on several factors, such as an occurrence of recurrent bleeding and the evolution of vascular lesion [3,4]. A relapse of subarachnoid haemorrhage occurs mainly in the acute phase of the disease, and rarely in the coming months and years [2]. A spontaneous and complete recovery of the vascular lesion, such as we observed, has been rarely reported [11-15].

Findings of colour coded duplex sonography were not diagnostic or specific to the present disease case. Colour coded duplex sonography could have a diagnostic value in the cases of high-grade basilar obstruction or cerebral vasospasm. Our observation showed that in the cases of a low or moderate-grade stenotic intramural haematoma, the basilar artery could be visualized with normal blood flow velocities.