Abstract: We report a case of papular cutaneous amyloidosis associated with multiple myeloma in a 52 years old man who presented papular xanthoma like lesions in periorbital areas and scrotum with severe bone pain in thoracic and lumbar spinal column and lower limbs. Cutaneous histopathology revealed the presence of amorphous deposits in papillary dermis surrounded with small lymphoid infiltrates with erythrocyte containing slots. Congo red staining was positive and bone marrow aspiration showed dysplastic plasma cells. Lytic lesions were observed in long bones and skull radiography. 24 hours Proteinuria was 3.69 g / l. A combination of Melphalan and prednisone as treatment could restore renal function without any change in skin lesions after 14 months.

Amyloid is defined as the deposition of insoluble protein fibrils, forming histologically a homogeneous, eosinophilic mass, which stains positive for the Congo red dye and displays green birefringence under polarized light because of its β-pleated sheet conformation [1]. Amyloidosis constitutes a heterogeneous group of distinct diseases, which differ in their pathogenesis and clinical course [2]. Amyloidoses are diagnosed by histopathological analysis using Congo red staining and/or electron microscopy. Immunoglobulin light chain–derived (AL) amyloidosis with an estimated 500 new cases per year in France is the most frequent amyloid disorder in the Western world [3]. It is usually caused by indolent plasma cell clone which synthesizes an unstable, misfolded monoclonal immunoglobulin light chain that is prone to aggregate and form amyloid fibrils. Cutaneous amyloidosis is characterized by deposition of amyloid in skin, which can be isolated or in association with systemic amyloidosis. Skin biopsy is important for the diagnosis of systemic amyloidosis, because amyloid deposition can be detected even in the skin of normal appearance. Cutaneous manifestations of amyloidosis may occasionally be the initial presentation of systemic amyloidosis. More over cutaneous manifestations in AL amyloid are numerous and polymorph [4]. We report a case of a cutaneous papular amyloidosis associated with multiple myeloma.

A 52 years old man consulted in dermatology department for periorbital papular lesions evolving since two years. History showed severs bone pain, predominantly in the thoracolumbar spine and lower limbs without any history of trauma and a progressive weight loss estimated for 5kg with appearance of cutaneous manifestations. Clinical examination revealed confluent papular lesions forming a plaque with a chamois yellow reflection in periorbital areas and around the nose (Figure 1), and ears lobules. There were also scattered papular lesions on external genitalia (Figure 2). There was no macroglossia or nail and hair involvement. The remainder of the physical examination was normal. Cutaneous histopathology showed a coated epidermis rich of adnexa and the skin was thin and flat. Superficial and reticular dermis was occupied by a diffuse infiltration made up of amorphous eosinophilic material with erythrocyte containing slots. In papillary dermis the amorphous deposits was surrounded with small lymphoid infiltrates with slots containing erythrocytes. Congo red staining was positive. It showed a histological image compatible with amyloidosis (Figure 3). Immunohistochemistry was not performed. Hematologic laboratory tests revealed a normochromic normocytic anemia of 8g / dl. Reticulocyte rate was 26,840 / mm3. Bone marrow smear was in favor of multiple myeloma with rare megakaryocytes and lymphoid lineage hyperplasia of dystrophic plasma cells more than 10%. The serum protein electrophoresis showed no monoclonal peak. The lipid profile was normal. 24 hours Proteinuria was 3.69 g / l. Renal biopsy was not carried out. Lytic lesions were observed in radiography of long bones and skull (Figure 4). The EKG and heart Doppler ultrasound were normal. Viral serologies were negative (HIV, hepatitis B and C). Fasting blood glucose was normal. Abdominal ultrasound and chest X-ray were normal. The patient was treated with calcitonin, corticosteroids at a dose of 1mg / kg and Melphalan® (Alkeran 14 mg). After two month of treatment serum calcium and renal function returned to normal and proteinuria stopped but skin papular lesions did not show any changes after 14 months. 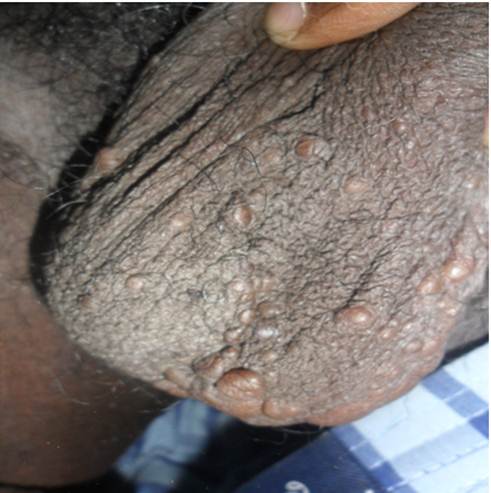 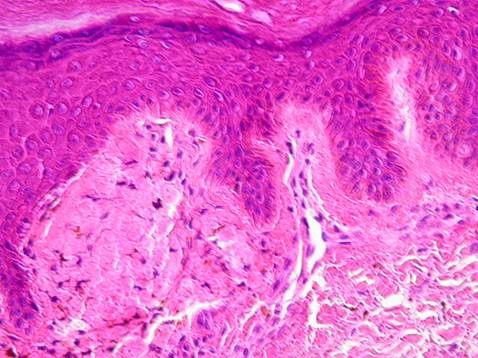 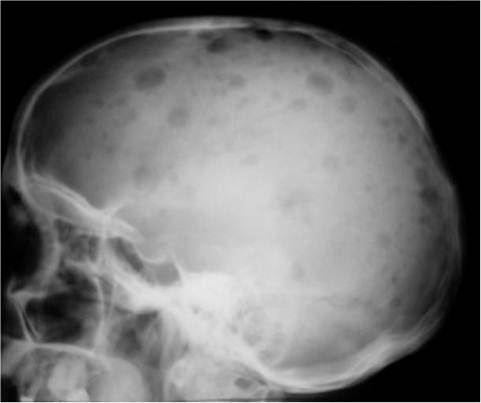 The prevalence of amyloidosis associated with multiple myeloma varies from 13% to 26% [5]. The sequential analysis of amino acids in systemic amyloidosis associated with multiple myeloma has shown that the amyloid fibrils are composed of an AL protein (light chain amyloidosis protein), which in turn are composed of variable region of immunoglobulin light chain (aminoterminal), intact light chain, or both [6]. The key event in the development of AL amyloidosis is the change in the secondary or tertiary structure of an abnormal monoclonal light chain (LC), which results in instable conformation. This conformational change is responsible for abnormal folding of the LC, rich in β plates, which assemble into monomers that stack together to form amyloid fibrils [7]. Amyloid fibrils display the appearance of a steel cable made of clusters of 2 to 6 proto-filaments plaited together. In all cases, the stacking is perpendicular to the axis of the proto-filament β-sheets and generates a material that specifically stains with Congo red or thioflavin [8, 9, 10]. Although we have not found the monoclonal peak in our patient’s serum proteins electrophoresis, but it cannot rule out the diagnosis of AL amyloidosis as it is reported in more than 89% of cases [11]. Skin and mucosal manifestations are observed in 29-40% of systemic AL amyloidosis [4]. They are the result of papillary dermis infiltration with amyloid deposition. The most common cutaneous manifestations are: petechiae, purpuras and ecchymoses. They occur spontaneously or following trauma because of vascular fragility secondry to amyloid infiltration of their walls [12]. Other less common lesions are plaques, papules and nodules which can be serous, smooth and shiny, yellowish-brown or skin colored, non-itching, and sometimes hemorrhagic. They affect mainly the eyelids, lips, tongue, oral mucosa, neck, axillae, umbilical scar and retro-auricular, inguinal and ano-genital regions [6]. Hemorrhagic bullous lesions associated with skin fragility have also been described [13]. Nail involvement in amyloidosis is due to amyloid deposition in the nail matrix, and can be an initial manifestation of systemic amyloidosis [14]. Ungual manifestations are dystrophy, thinning, whitening, banding, striations, brittleness, onycholysis, fragility and even anonychia [15]. Diffuse or localized alopecia due to the scalp infiltration may be seen [16]. The importance of our observation is the xanthoma like presentation of cutaneous amyloid lesion that can be easily confounded with a xanthoma. But histopathology and normal lipid profile can tell between them. Other differential diagnoses were sarcoidosis, lymphoma and benign lymphoid hyperplasia. Genital lesions in our patient were confounded to genital warts. Renal involvement is seen in two thirds of patients and in 20-45% of cases manifest as renal failure at time of diagnosis [17]. If renal disease is not seen at time of diagnosis, it rarely appears later. Glomerular amyloid deposits are usually responsible of a proteinuria consisting mainly of albumin without hematuria, leading to nephrotic syndrome and progressive renal failure. Interstitial or vascular disorders are also noted, kidney maybe the only organ is involved with a pure renal failure. Renal biopsy allows the detection and typing of deposits in more than 80% of cases [18]. Renal biopsy was not indicated in our patient because of the presence of kidney failure. The treatment of amyloidosis is usually based on the treatment of plasma cell proliferation either by chemotherapy or autologous bone marrow transplantation. The good response rate is fairly low and is around 20%. When amyloidosis is associated with myeloma, Melphalan® and prednisone combination remains the standard treatment [11]. Close monitoring of clonal and organ response is mandatory to guide the changes and duration of therapy. New drugs designed to wash out amyloid deposits are under development. Clinical and laboratory course in our patient was associated with recovery of renal function and regression of proteinuria after two months of treatment. However the skin lesions did not changed after 14 months of treatment.

Papular amyloidosis should be considered as a differential diagnosis of any xanthoma like lesion especially when it is associated with extra cutaneous manifestations like bone pain. The immunoglobulin amyloidosis is characterized by a polymorphism of its cutaneous lesions what a dermatologist must be always aware of.