Abstract: Whipple's disease is a rare infection of the gastrointestinal tract caused by the actinomycete Tropheryma whippelii. It most commonly presents with arthralgia, abdominal pain, diarrhoea and weight loss. Invasion of the bacterium through the gastrointestinal mucosa leads to small intestinal villus blunting and malabsorption. Diagnosis is made by histological examination of small bowel biopsies. We report the case of a 78 year old gentleman who had a two year history of fleeting joint pain and multiple hospital admissions for varying symptoms. He was treated with antibiotics for a chest infection with improvement only to present again after 1 year with anorexia, fatigue, blackish loose stools and epigastric pain. Microscopic examination of duodenal biopsies showed a stunted villous architecture and expansion of the lamina propria by foamy macrophages. These expressed CD68 and cytoplasmic contents were strongly PAS positive, consistent with a diagnosis of Whipple’s disease. He was started on intravenous ceftriaxone and a prolonged course of oral co-trimoxazole (at least 1 year) with marked clinical improvement. In retrospect, the previous year’s admissions might have also been due to Whipple’s disease but since he did not have the full course of the appropriate treatment he relapsed. Whipple's disease is a difficult diagnosis to make because of the variety of clinical symptoms and the long time span between the initial unspecific symptoms (the prodromal stage) and the full-blown clinical picture of the illness (the steady-state stage). It may be misdiagnosed with a non-infectious rheumatic illness and may be fatal if untreated.

Whipple's disease is a rare, granulomatous infection of the gastrointestinal tract caused by the Gram positive actinomycete Tropheryma whippelii [1]. It most commonly presents through the fourth to the sixth decade of life, with arthralgia, abdominal pain, diarrhoea, weight loss and occasionally fever [2]. Invasion of the bacterium through the gastrointesinal mucosa leads to macrophage recruitment to the lamina propria, with obstruction of local lymphatics and small intestinal villus blunting. This results in malabsorption [1]. The Tropheryma whippelii can spread to sites that show a lack of immunological response to it. Diagnosis is made by histological examination of small bowel biopsies with positive periodic acid-Schiff staining [3].

Our patient is a 78 year old gentleman with a past history of Paget's disease, atrial fibrillation and immune thrombocytopoenia. He presented with a three week history of epigastric pain associated with flatulence, increased lethargy for one week and two episodes of blackish loose stools. He denied any other symptoms except for a two year history of fleeting joint pain for which he was being investigated by the rheumatologists for possible palindromic rheumatoid arthritis. Physical examination was unremarkable. An oesophagogastroduodenoscopy (OGD) was performed. This showed marked gastritis in the body of the stomach and pylorus confirmed histologically. Histology from duodenal biopsies were reported as showing ‘lipid-laden macrophages in the lamina propria’. No Helicobacter organisms were identified. He was started on a proton-pump inhibitor and discharged home after a few days when his condition improved, only to be readmitted 1 month later again complaining of a bout of melaena and abdominal pain. He was started on antibiotics for a diagnosis of acute diverticulitis. This was complicated by the development of hospital acquired pneumonia and congestive heart failure. Antibiotics were switched accordingly and treatment for heart failure instituted. He improved slowly but was well enough to be discharged home after three weeks. At review as an outpatient, he remained well and claimed to have recovered his strength and independence.

He was readmitted after 1 year, when he complained of a three month history of weight loss, lethargy and shortness of breath on exertion as well as a three weeks of anorexia and occasional epigastric pain. He denied other symptoms, never smoked and only drank alcohol socially in mild amounts. He is a retired shipwright, with no past agricultural activity or recent travel history. He is on prednisolone for immune thrombocytopoenia.

Microscopic examination of the duodenal biopsies showed a rather stunted villous architecture and expansion of the lamina propria by a population of foamy macrophages and sparse eosinophils. The submucosa was not inflamed and the intraepithelial cellularity was within normal limits. There was no evidence of dysplasia or malignancy. The macrophages expressed CD68 but not S-100, and the cytoplasmic contents were strongly periodic acid-Schiff (PAS) - positive, even after diastase digestion (figure 2). 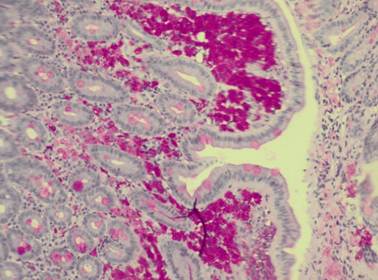 These features were consistent with Whipple's disease. The patient was treated with 1mg bd of intravenous ceftriaxone for 14 days and started on 960mg bd of oral co-trimoxazole thereafter, which he was instructed to take for a minimum of 1 year. At review after eleven months of treatment, he remains well.

Whipple's disease is a chronic condition, first described by the pathologist George Hoyt Whipple in 1907 as 'intestinal lipodystrophy'. Whipple described a 36 year old medical missionary with weight loss, abdominal pain, polyarthritis, lymphadenopathy and fatty diarrhoea. In 1961, Paulley et al identified 'bacillary bodies' suggestive of an infectious agent [4]. In 1992, polymerase chain reaction was used to identify the micro-organism and it was named Tropheryma whippelii (Greek, trophe: nourishment; eryma: barrier, due to the resulting malabsorption) [5].

The organism is a Gram positive bacillus, which stains PAS positive and is diastase resistant. Histopathological examination of duodenal/jejunal biopsies is the most commonly used diagnostic technique [6]. Other diagnostic tools are T. whippelii-specific polymerase chain reaction (PCR), and T. whippelii-specific immunohistochemistry (IHC). Despite these advances, Whipple’s disease is still a difficult diagnosis to make because of the variety of clinical symptoms and the long time span between the initial unspecific symptoms and the full-blown clinical picture of the illness [7].

Whipple's disease is an extremely rare illness [9]. Between 1907 and 1987, 696 cases were reported, 55% of which were from Europe and 38% from North America. 97% of such cases were white and two-thirds were farmers, machinists or construction workers. The disease affects predominantly middle-aged to elderly males. The annual incidence since 1980 has been thought to be around 30 cases per year worldwide. 30% of patients are Human Leukocyte Antigen B-27 positive [3].

The clinical manifestations of Whipple's disease can be divided into a prodromal stage and a steady-state stage. The prodromal stage is characterised mainly by arthritis and arthralgia. It can last for six to ten years before clinical features of the steady-state stage become apparent. The steady-state stage is characterised by diarrhoea, weight loss and other signs or symptoms such as malabsorption, abdominal pain, lymphadenopathy, mild fever, hyperpigmentation of the skin, cardiac involvement, CNS involvement, hepatosplenomegaly, hepatitis, ocular involvement, skeletal muscle myalgia and pleural effusions [10].

Whipple's disease may be fatal if untreated. Current treatment recommendations are not based on randomised controlled clinical trials but evidence from case series and retrospective analysis suggest the use of 2g intravenous ceftriaxone daily for two weeks followed by 960mg of oral co-trimoxazole for one to two years [3]. This has been suggested to cure all patients [11] but the susceptibility of T. whippelii to such antibiotics varies. The presence of mutations in the folP gene that encodes dihydropteroate synthase, the target of sulfamethoxazole, also contributes to clinical failure [12]. One year of trimethoprim/sulfamethoxazole seems to be too short a treatment for many patients and this has been shown to result in relapse of the disease. A study carried out in Marseille in 2010 evaluated these antibiotic regimens on 14 patients diagnosed with Whipple’s disease. After more than 3 years of follow up, none of the 14 patients was cured [13]. CNS involvement has a particularly high relapse rate after apparently successful treatment [4]. Since Whipple’s disease is a chronic infection, follow-up should continue throughout the patient’s lifetime [14].

The differential diagnosis of Whipple’s disease includes other malabsorptive conditions with small intestinal involvement (such as coeliac disease, Mycobacterium avium infection of the small intestine, tuberculosis, histoplasmosis and non-steroidal anti-inflammatory drug-induced injury to small bowel) and infiltrative diseases of the small bowel (such as non-Hodgkin lymphoma and amyloidosis) [7] (table 1).

Prodromal symptoms such as seronegative arthritis accompanied by fever may misdiagnose Whipple’s disease with a non-infectious rheumatic illness. Up to 50% of patients with Whipple’s disease are erroneously treated with disease-modifying anti-rheumatic drugs, glucocorticoids and anti-tumour necrosis factor alpha therapy with potentially fatal sequelae due to spread of infection [15]. One should be alerted to the possibility of Whipple’s disease in cases of coexistent diarrhoea, malabsorption, weight loss, seronegative arthritis, lymphadenopathy and low grade fever. A timely diagnosis might be difficult in cases without gastrointestinal symptoms [7].

Our patient showed some of the classical manifestations of Whipple's disease such as malabsorption, weight loss and abdominal pain. He also had a typical prodromal stage consisting of migratory arthralgia for several years, for which he was being reviewed by the rheumatologists for possible palindromic rheumatoid arthritis. In retrospect, the arthralgia could be one of the manifestations of Whipple's disease. The previous year’s admissions might have also been due to Whipple’s disease. The temporary improvement lasting some months could have been the result of antibiotic treatment he received but since he did not have the full course of the appropriate treatment he relapsed.

Whipple’s disease is an important condition to diagnose as it is treatable but may be fatal if missed. Its complex presentation requires clinicians to retain a high index of suspicion.

Ethical approval was obtained from the local ethics committee.