Abstract: Prostate Specific Antigen (PSA) is the first line test in screening of prostate cancer. The increase in PSA depends on differentiation of tumour cells. Gleason grading is one of the most powerful predictors of biological behaviour and influential factors used to determine treatment. PSA, when combined with Gleason score and clinical stage, improves the prediction of pathological stage for prostate carcinoma. Aims of this study were to study the histopathological features and Gleason grading in Prostatic Carcinoma and to correlate pretreatment PSA levels with Gleason grade. The study was undertaken in a tertiary care hospital over a period of two years.Fifty one cases of prostatic carcinoma were studied. Grading done by Gleason grading system, was correlated with serum PSA levels. Software statistical package for social sciences (SPSS), version 16 was used. P value < 0.05 was considered significant. Patients were aged predominantly between 60 to 70 yrs. Majority (66.7%) had poorly differentiated adenocarcinoma. 84.3% had high values of PSA (>10ng/ml). 5.9 % had PSA value in normal range (< 4 ng/ml). Though there was a comparative increase in PSA level with increase in Gleason grade, it was not statistically significant (‘p’ value = 0.75). To conclude, a proportion of tumours with Gleason score 8-10 are so poorly differentiated that they produce relatively little PSA. Refinement in estimation and interpretation of PSA values may be considered to improve the sensitivity and specificity of PSA. Gleason grading is a better predictor of biological behaviour of prostate cancer.

Prostate cancer is the most common cancer of men in USA and 10th common malignancy in India1,2.  Patients don’t experience symptoms during early stage and are unlikely to seek medical help until the disease has progressed. Hence, screening programmes aimed at early detection have been introduced.

PSA is the most useful tumour marker in diagnosis and first line test in screening3,4.  The increase in serum PSA depends on differentiation of tumour cells. Gleason grading is one of the most powerful predictors of biological behaviour and influential factors used to determine treatment. PSA, when combined with Gleason score and clinical stage, improves the prediction of pathological stage for prostate carcinoma5.

We analysed the histolopathological features and Gleason grading in prostate carcinoma and correlated with pre-treatment PSA.

The present study was undertaken in a tertiary care hospital and 51 cases were studied over a period of 2 years (April 2011 to April 2013). All cases of prostatic biopsies, transurethral resection of prostate (TURP) specimens and radical prostatectomy specimens with or without clinical suspicion of malignancy which were proven as prostatic carcinoma on histopathological study and where serum PSA levels were available were included in the study. Biopsies with inadequate material and non malignant lesions were excluded.

The specimens were fixed immediately in 10% formalin for 24 hours. Later they were processed routinely for paraffin sectioning and stained by Haematoxylin and Eosin stain. The slides prepared were analyzed and grading of prostate carcinoma was done by Gleason system.

Adenocarcinoma was assigned one of the four grades:

Patients were aged predominantly between 60 – 70 yrs. The mean age at diagnosis in this study was 68yrs. Youngest patient was 44yrs and oldest patient was 90 years.

All the cases displayed features of acinar adenocarcinoma. The various patterns observed include glands(Fig 1), cords(Fig 2), cribriform, sheets (Fig 3), hypernephroid and comedonecrosis(Fig 4). The most common was glandular pattern (78.8%), followed by cords(60.8%). Three cases (5.9%) were associated with high grade prostatic intraepithelial neoplasia (HGPIN). In our study, majority (66.7%) had poorly differentiated adenocarcinoma followed by moderately-poorly differentiated (27.5%). Only 2% of the cases were well differentiated. [Graph 1] 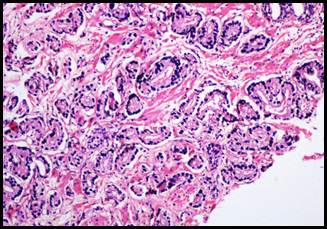 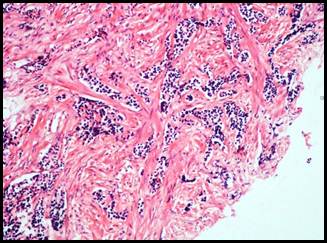 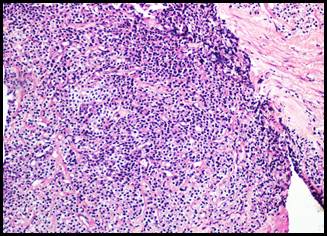 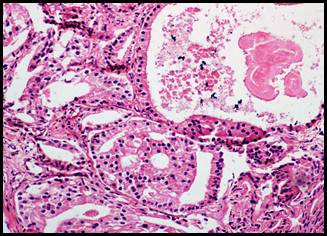 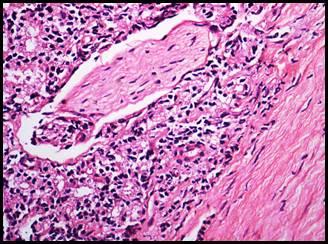 Out of 12 cases, where we received both biopsy and TURP specimens, 5 cases underwent up gradation of Gleason score. PNI was seen in 52.9% of the cases (Fig 5).

Patients were aged predominantly between 60 – 70 yrs. The mean age at diagnosis in this study was 68yrs and youngest patient was 44yrs. This is comparable with studies done by Mwakyoma HA et al, Jackson LA et al and Okolo CA et al6,7,8. In our study, there were four patients younger than 50 yrs who had prostate cancer. Studies by Jackson et al and Bunker et al showed three and nine patients who were below 50 yrs respectively7. These findings confirm that prostate cancer is a disease of elderly men, although young men are not excluded.

All the cases displayed features of adenocarcinoma. This is in very close agreement with studies done by Mwakyoma HA et al (99.1%), Jackson LA et al(100%) and Thompson IM et al6,7.

In our study, majority (66.7%) had poorly differentiated adenocarcinoma followed by moderately to poorly differentiated (27.5%). Only 2% of the cases were well differentiated. This is similar to that reported by Catalona WJ et aland Shirley SE et al6,19. On the contrary, Jackson LA et al(69.68%), Mwakyoma HA et al(61.1%), Zivkovic S et al(52.5%) reported, moderately differentiated adenocarcinoma (Gleason score 5-7) to be the predominant type6,7,10. Comparing our findings with those of others, the histological findings indicated that their patients had less aggressive disease than patients in our region. Our findings also reflect the relatively late clinical presentation of the patients.

Possible contributing factors for the above difference are:

Out of the 12 cases where we received both biopsy and TURP specimens, 4 cases underwent up gradation of Gleason score. According to Corcoran NM et al, patients experiencing an upgrade in their Gleason score between biopsy and final specimen exhibit significantly more aggressive pathological features than corresponding concordant tumours, and a higher risk of biochemical recurrence post radical prostatectomy12.

The incidence of HGPIN is relatively low in our study because most of the specimens were needle biopsies and TURP, which don’t have enough material compared to radical prostatectomy studied in other studies. Many studies have shown that HGPIN is the major precursor of prostate cancer. HGPIN may evolve into an invasive cancer, a process that can take more than ten years to develop or remain unchanged14.

Perineural invasion was seen in 52.9% of our cases. In a study by Shirley SE et al, 33.3% of the cases showed PNI9. Perineural invasion is an established risk factor in other malignancies and a recognized mechanism whereby cancer cells spread beyond the prostate by using the rich innervations of the posterior aspect of the prostate. However, existing publications on the significance of perineural invasion are contradictory. Studies by Freedland SJ et al and Ravery V et al found that it was not an independent prognostic factor. On the other hand, D’Amico AV et al, Rubin MA et aland Quinn DI et al reported that it was independently prognostic15. Despite multiple articles involving thousands of patients, the question of why there is still uncertainty about the prognostic value of perineural invasion has not been addressed.

Out of 51 cases, six (11.8%) showed bone metastasis. Not all of the patients had undergone imaging studies, and therefore the prevalence of occult spread may have been higher than reflected by this value. Patients presented mainly with backache and weakness of lower limbs which may be due to pathologic fractures secondary to metastasis of prostate carcinoma to vertebra. 88.3% of these were Gleason grade 4 and 28.9% were Gleason grade 3. Perineural invasion was seen in 83.3% of these cases. Significant elevation of S.PSA levels (>20ng/ml) were seen in 83.3% of the patients. But one of the patients had PSA level within the normal range and a Gleason score of 5+5.In a study done by Shirley SE et al,7% of the cases showed metastasis9. Most common sites of metastatic spread of prostatic carcinoma are the skeletal system and lymph nodes. Bone metastases are characteristically osteoblastic. Lumbar spine, sacrum, and pelvis are the most common locations, as a result of tumour spread via Batson's vertebral venous system. The diagnosis of bony metastasis secondary to prostate cancer significantly alters patient treatment. According to Abdellatif et al, Chybowski et al and Rhoden et al, the incidence of positive bone scans in patients with PSA less than 20 ng/ml is low. Thus, staging bone scans can be avoided in patients with PSA less than 20 ng/ml resulting in large economic savings. On the other hand, according to few studies done in Japan, the incidence of positive bone scan in patient group with low PSA levels was much higher than that in other studies performed in Western countries. This raises the suspicion that the behaviour of carcinoma prostate is different in Asian population compared with Caucasians, and PSA might not be a good indicator for predicting bone scintigraphy results in some ethnic group16.

In a study of 354 patients with carcinoma prostate (Gleason score 8-10) by McGuire BB et al, 17.5% had PSA level<4ng/ml17. In a similar study by Thompson IM et al, 15.2% had PSA <4ng/ml, out of which 14.9% had a Gleason score of 7 or higher6. About 5 – 10 % of carcinomas produce little PSA. It is thought that these cancers are so poorly differentiated that the epithelial cells lose expression of a PSA encoding gene18.Thus, a growing tumour does not substantially increase serum PSA levels. In clinical practice, prostate biopsy is less likely performed for patients with low PSA levels. This could result in these tumours being diagnosed at a later stage than tumours producing more PSA. Also, patients with high grade, low PSA tumours have poorer prognosis than those of higher PSA levels17.

The mean value of S.PSA in Grade 1 Adenocarcinoma was 8ng/ml, in Grade 2 was 42.5ng/ml, in Grade 3 was 44.1ng/ml and in Grade 4 was 61.8ng/ml. The highest PSA level was in Gleason score of 8-10. Though there was a comparative increase in PSA level with increase in Gleason grade, it was not statistically significant (‘p’ value = 0.75). The results of various studies on correlation between Gleason grade and pre treatment PSA levels are conflicting. Some studies have reported positive correlation between the two6,7,8,10,19. According to them, prostate cancer cells produce more PSA than normal cells and hence poorly differentiated cancer cells secrete and release greater amounts of PSA than the well differentiated ones19. On the contrary, few studies have indicated inverse correlation16,20. According to them, PSA production decreases with increasing histological grade12. The lack of correlation between Gleason score and PSA may be explained by decrease in production of antigen by higher grade lesions due to loss of expression of PSA encoding gene10,17.

Although evaluation of serum PSA can lead to diagnosis of clinically significant cancer at an early and potentially curable stage, not all prostate cancers are associated with an elevated serum PSA. Though there was a comparative increase in PSA level with increase in Gleason grade, it was not statistically significant (‘p’ value = 0.750). Serum PSA level is influenced by differentiation of tumour. A proportion of tumours with Gleason score 8-10 are so poorly differentiated that they produce relatively little PSA. Hence, one should be cautious while interpreting PSA levels and has to correlate with digital rectal examination and prostate biopsy findings. Gleason grading is a better predictor of biological behaviour of prostate cancer. Refinement in estimation and interpretation of PSA values – free PSA levels, PSA density, PSA velocity may be considered to improve the sensitivity and specificity of PSA.