Abnormal uterine bleeding (AUB) is a commonly encountered complaint in gynaecology outpatient department. Although the causes vary with age, the most worrisome cause of perimenopausal or postmenopausal bleeding per vagina is the malignancy of the endometrium.

In about 10% of cases AUB is associated with endometrial cancer, but it can be caused by many other conditions such as polyps, myomas, hormonal dysfunction and most commonly in post menopausal women atrophy.1,2,3

Though various methods have been introduced to know the endometrial status, no widely accepted screening test for endometrial carcinoma exists because of certain issues like cost-efffectiveness and patients acceptance.4,5

Endometrial cells are present incidentally on many pap tests, providing cytopathologists an oppertunity to examine these cells in specimen that may have been obtained for other reasons.6

Endometrial cells are a normal component of smear in first half of menstrual cycle when endometrium breakdown and shedding occurs. However, if endometrial cells are observed in smears in second half of cycle, the pathological significance is greater although cell shedding at this time can be associated with use of OCP, IUCD or use of HRT.7

An association has been reported with presence of endometrial cells on cervical smears and clinically significant uterine lesions.Hence The Bethesda system 2001 has mandated multiple reporting categories meant to apply to endometrial cells.8

Guidelines from the 2001 Bethesda system suggested, in addition to reporting of atypical glandular cells (AGC) and adenocarcinoma, the reporting of benign appearing endometrial cells in women aged above 40 years is mandatory and a review of literature supports this recommendation.9

Recently liquid based cytology has become an alternative to conventional pap smears as it reduces the preparation of inadequate smears by removing the obscuring factors such as blood, mucus and overlapping cells, increasing the diagnostic accuracy.10,11

Some studies have shown more accurate diagnosis of glandular lesion.12,13

It reduces the screening time, resulting in greater efficiency of cytopathologist and the most important advantage is the opportunity to use the residual sample for additional ancillary techniques, such as immunocytochemistry, flow cytometry and molecular biology. Infact, the LBP method enables storage of a variable amount of cells.

However, the cost of most commercially available LBC system is prohibitively expensive for resource-limited settings.12, 13 Trained individuals and periodic maintenance of the equipment are required.

Many workers like Alves et al.12and Lee et al.13 have worked on an improvised manual method for preparation of liquid based cytology smears, for cervical cancer screening and found it comparable with CPS

1.  To explore the role of cervical cytology in the diagnosis of endometrial diseases in all abnormal uterine bleeding cases

2.  To estimate the presence of endometrial cells (atypical & benign looking) & proportion of them associated with significant endometrial pathology

3.  To quantify any differences in the underlying rate of significant pathological outcomes between conventional  and manual liquid based cytology

Samples were collected using split- smear technique from patients with bleeding history in the age group of 20 to 70 years attending the gynaecology out-patient clinic at JSS Hospital, Mysore, prospectively from July 2012 to July 2014 for a period of two years. Manual Liquid Based Cytology was strongly advocated as it improves sample quality and reduces the likelihood of false negative results by removing obscuring factors.

Statistical methods applied were Descriptives, Chi-square test and Crosstabs (Contingency table analysis. Apart from the above, diagnostic accuracy, sensitivity and specificity were calculated manually. All the statistical calculations were done through SPSS for windows (v 20.0). A P value of less than .05 was considered statistically significant.

During the study period, 52 Pap tests showed endometrial cells including 38 nEMCs and 14 aEMCs with history of abnormal uterine bleeding. The mean age was 45.5 years (range, 20-75 years), with women being postmenopausal were 24 patients. Remaining 28 cases had irregular menstrual cycle in the form of polymenorrhea, menorrhagia or intermenstrual bleeding.

Abnormal uterine bleeding history was most commonly seen in age group of 40 -49 year.

Among 52 cases, histopathological correlation in the form of total hysterectomy and endometrial sampling. was obtained in 39 cases.

On follow up with histopathology there were 8 cases of malignancy, 1 case of pre cancerous lesion and others were benign pathology. Among benign cases maximum of 8 cases of leiyomyoma with proliferative endometrium , followed by 6 cases of simple hyperplasia without atypia and 4 cases of adenomyomatous polyp.

Benign endometrial cells did not show any malignant pathology on histopathology follow up.

When the results were analysed presence of endometrial cells in cervical cytology was found to be significant (p <0.05) and on cross tabulation of CPC,MLBC and HPE showed better contingency with MLBC (0.572 V/s 0.556). 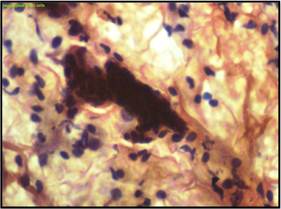 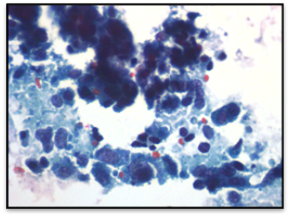 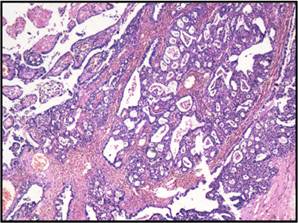 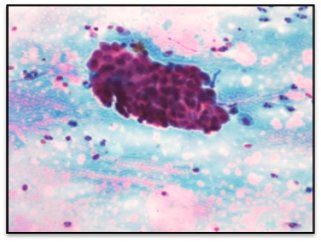 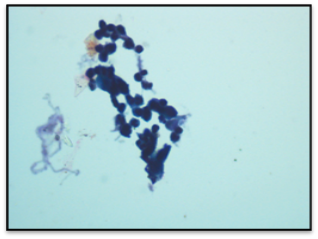 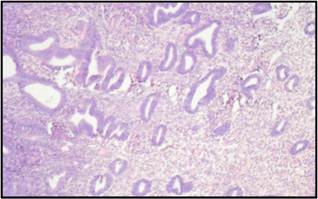 Our study was conducted among women between 20-75 year old with history of abnormal uterine bleeding. Although The Bethesda system recommendation is 40 year, our consideration of wide age range was because shedding of normal endometrial cells has been associated with the following conditions: polyps, hyperplasias with and without atypia, low and high grade adenocarcinomas, leiomyomata, atrophy, proliferative endometrium, immediate postpartum state, impending or early post abortion, acute endometritis, recent intrauterine instrumentation, IUD use, and cervical and vaginal endometriosis .14

This was also to include those high risk women under 40 who have obesity, type 2 diabetes, hypertension, anovulation/ Polycystic Ovary Syndrome (PCOS), and genetic factors such as defects in DNA mismatch repair genes ,are at greater risk for a significant lesion if shedding endometrial cells out of phase. Studies with this stratification and sub analysis are lacking in the literature14.

In our study the youngest patient with endometrial carcinoma type 1 was 36 year , but no family history of uterine or breast malignancy was reported.

Unlike AEMCs and EMCCs, NEMCs are reported only in women 40 years or older based on The Bethesda System 2001 (TBS2001) because age is more consistently available than menopausal status or clinical symptoms and the incidence of significant endometrial pathology in women younger than 40 years is extremely low.15

Our data also indicated that there was little significant pathology (cancerous / precancerous) in premenopausal women with benign endometrial cells on Pap cytology.

However, among 24 postmenopausal patients with atypical endometrial cells, six were diagnosed to have endometrial carcinoma and one person with complex hyperplasia with atypia on follow up.

Comparisons between those studies also were hampered by significant differences in the classification of Pap tests, including a lack of consensus about whether benign-appearing endometrial cells constitute normal or abnormal findings.8

Regarding the method of collection, sensitivity of cervical cytology testing for true glandular neoplasia is less than that for squamous lesions, in part because glandular lesions arise in the endocervical canal and endometrial cavity where they may be difficult to sample.

But available literature suggested compared with conventional cytology, LBC may be associated with a higher prevalence of NECs because of more consistent use of sampling instruments for LBC with better access to this area.7

However, we used manual method of liquid based preparation and found that the MLBC method was comparable to the CPS though our data showed no much difference in prevalence of endometrial cells between CPS and MLBC

Increased detection of cellular abnormalities by liquid based method depends on many factors like adequacy of sample, type of spatula used to collect sample and type of sampling whether direct to vial or split-sample method.

There are 3 possible explanations for improved sensitivity:

2.  LBC reduces obscuring elements and thus allows for detection of abnormal cells that could have been otherwise hidden on CPS.

Endometrial carcinoma early detection is becoming an increasingly important challenge. So the time has arrived to consider screening for endometrial pathology seriously.

Recently, developed countries like Japan has conducted randomized controlled trial comprising liquid based endometrial cytology as screening tool for the early detection of their considerately increasing endometrial cancer and gained a huge response.

In developing country specially in low resources set up, MLBC can be of little help. It overcomes the limitations of CPS like removing obscuring factors and increasing diagnostic accuracy. Also, future ancillary techniques like preparation of cell blocks, immunocytochemsitry and HPVtesting becomes possible in testing of new paradigms for screening strategies that are required in such settings.

From our study, we like to stress upon that-

2.  manual liquid based cytology as an alternative and more effective screening for endometrial pathology in low-resource settings

3.  further need for additional trials to evaluate the diagnostic accuracy of liquid based endometrial cytology in the evaluation of endometrial pathology.