Abstract: Hypereosinophilic syndrome (HES) was first described by Hardy and Anderson in 1968 . HES may result either from eosinophilic differentiation of a clone of neoplastic cells or from reactive eosinophilia. It appears lightly that in many patients idiopathic HES is actually a chronic myeloproliferative disorder. There is vaguely overlapping clinico-pathological picture of HES with (Chronic eosinophilic leukaemia) CEL which often adds to diagnostic confusion. In 2001, the World Health Organization (WHO) proposed a set of criteria that distinguish CEL from HES. An evidence of genetic clonality of eosinophils or an increase in blast cells in blood or bone marrow is mandatory for diagnosis of CEL, while no specific diagnostic tests exists for HES, making it an entity of exclusion. A 36 year old female presented with intermittent fever and dry cough since two months. Clinical examination revealed mild pallor with hepatosplenomegaly. Chest examination showed bilateral basal crepitations. The patient was subjected for hematological, biochemical and radiological assessment. The peripheral smear and bone marrow aspirates revealed presence of eosinophilic precursors with predominance of eosinophiloblasts associated with eosinophilic myelocytes, metamyelocytes, a few myeloblasts and lymphocytes, the features of which are in favour of CEL. CEL, a rare myeloproliferative entity and its presentation with pulmonary manifestations is still rare in India. Hence, we present this rare entity along with review of available literature.

Hypereosinophilic syndrome (HES) was first described by Hardy and Anderson, but the diagnostic criteria of this hematological disorder were proposed by Chusid et al. in 19758 and have been almost invariably accepted until recently.

These criteria include unexplained severe peripheral blood eosinophilia (higher than 1500 eosinophils/mm3) sustained for over 6 months and accompanied by end-organ damage resulting from direct organ infiltration by eosinophils. The generic term "unexplained eosinophilia" has been used to exclude any allergic, inflammatory, infectious or neoplastic diseases, including specific eosinophilia induced by chronic or acute myelogenous leukemia, myelodysplastic syndromes or other myeloproliferative disorders.

In 2001, the World Health Organization (WHO) proposed a set of criteria that distinguish CEL from HES9. These criteria were based on the exclusion of the diseases mentioned above, together with the absence of a T-cell population with an aberrant phenotype and abnormal cytokine production, and the presence of a clonal cytogenetic abnormality or clonality, or a blast content in the peripheral blood (higher than 2%) or marrow (more than 5% but less than 19%).

Two types of HES/CEL, in particular have been described; Intrinsic: those with clonal expansion of a myeloid progenitor population with primary eosinophil differentiation including FIP1L1/PDGFRα+ CEL and CEL demonstrating with cytogenetic abnormalities; and Extrinsic: eosinophil expansion responding to a clonal expansion of T-cells, expressing high levels of the eosinophil-differentiating cytokine interleukin-5 (IL-5), including a subgroup of HES/CEL patients who present clonal T-cell populations, expressing aberrant phenotypes and producing Th2 cytokines such as IL-52.

HES may result either from eosinophilic differentiation of a clone of neoplastic cells or from reactive eosinophilia. In other patients HES is idiopathic. It appears lightly that in many patients idiopathic HES is actually a chronic myeloproliferative disorder. Those cases showing an increase of blast cells or a demonstrable clonal cytogenetic abnormality should be classified as eosinophilic leukemia3.

According to available data, the incidence is highest in the fourth decade of life and the disease most commonly affects males. In CEL the eosinophilic count is greater than or equal to 1.5 x 109/L. The rarity of CEL is further compounded by a variety of other disease processes accompanied by chronically persistent eosinophilia4.

Here we present this rare entity which presented clinically with vague signs and symptoms of pulmonary infection.

A 36 year old female presented with intermittent fever and dry cough since two months. She did not reveal any obvious history of smoking, alcohol or drug abuse, any allergic disease and no exposure to any toxins/pesticides. On examination she was febrile with a temperature of 100.5oF, pulse rate was 110 beats/minute with normal rhythm. Clinical examination revealed mild pallor with hepatosplenomegaly. Chest examination showed bilateral basal crepitations. The patient was subjected for hematological, biochemical and radiological assessment.

Biochemical parameters were within normal limits.

An increase in the blood eosinophil count may occur in a number of diseased states including allergies, parasitic infections, vascular disease and as a reaction to the presence of malignant tumors5.

Presently, an unexplained chronic persistent eosinophilia with a demonstrable cytogenetic abnormality or an increase in blast cells is considered as eosinophilic leukemia7.

The modern diagnostic criteria as proposed by World Health Organization 1 for CEL include:

4.     No reactive eosinophilia due to allergy, parasitic, infectious, pulmonary, or collagen vascular disease

5.     No reactive eosinophilia due to other malignancies:

6.     No T-cell population with abnormal cytokine production and aberrant phenotype

Any patient diagnosed with eosinophilia (eosinophils .0.5 x 109/l), falls into one of the three categories of disease described as follows:

Our understanding of and treatment options for patients with eosinophilic leukaemia and the idiopathic hypereosinophilic syndrome have improved greatly in recent years, the major advance being the discovery of the cytogenetically silent FIP1L1–PDGFRA fusion and the response of the associated syndrome to imatinib therapy6.

In our case, chronic eosinophilic leukaemia as a presumptive diagnosis was made based on the morphologic features of peripheral blood smear and bone marrow aspiration study, though the karyotype could not be investigated. Referral to another centre for cytogenetic analysis and further evaluation and management was declined for financial constraints.

Our case study is an attempt to highlight the need for caution in diagnosing patients with unexplained eosinophilia. 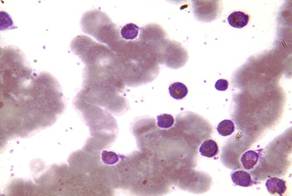 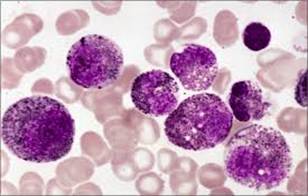 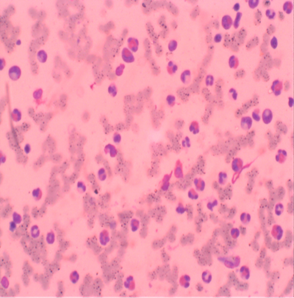 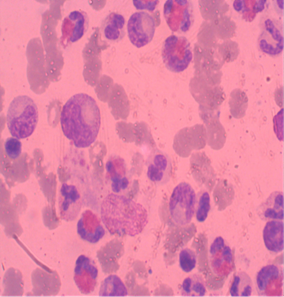