Abstract:Systemic mycosis caused by fungi (or dimorphic fungi) such as Histoplasma, emmonsia, candida & penicillium has emerged as an important opportunistic fungal infection in immunocompromised patient in South- East Asia. Several cases of opportunistic fungal infection has been reported but cytological diagnosis of disseminated (dimorphic) fungal infection has been reported in very few cases. Cytological diagnosis of these infections depending on the morphological characteristics has always been a challenge to practising cytologists. A case of rare disseminated fungal infection reported in a 45 year old seropositive male who is noncompliant on ART presented with ulcer over palate, fever, weight loss, occasional per rectal bleeding. On examination having bilateral cervical lymphadenopathy and hepatomegaly. On investigation- anaemia, high ESR, deranged liver function test, CD4 count 16/cumm, USG showed hepatomegaly, underwent FNAC cervical lymphnodes and guided FNAC of liver, which showed these organisms, but no pathogens were found with classical microbiological procedure. Patient was treated with itraconazole and amphotericine and showed improvement. This case illustrate the utility of FNAC in early diagnosis & management of rare infection & it also highlight the combined role of molecular technique and FNAC as an interdisciplinary approach for management of patient.

Systemic infections caused by fungi constitute a major public health problem in many parts of the world, both in developed and developing countries1,2.

Fungi are extremely fit for survival as evidenced by their ubiquity in nature. However, of the estimated several hundred thousand species of fungi, fewer than 150-200 were considered to be pathogens of humans. However, in recent years, fungi are flourishing in man. The number of fungi causing systemic disease is growing and the number of systemic diseases caused by fungi is increasing. Up to 7% patients dying in teaching hospitals have invasive aspergillosis3,4,5. Candida spp. accounts for 8-15% of nosocomial blood stream infections and fourth most common isolate of patients of intensive care unit6. Specific patient groups have very high frequencies of fungal infections: 15% of allogenic hemopoietic stem-cell transplant recipients have a fungal infection7, about 20% of lung transplant recipients are colonized and infected8, about 60% and 20% of AIDS patients have Pneumocystis carinii ( jiroveci ) pneumonia or esophageal candidiasis, respectively9, cryptococcal meningitis is present in 30% of people with AIDS in Africa and southeast Asia10, and Penicillium marneffei infections are present in about 30% of people with AIDS in south-east Asia11. With the emergence of AIDS. Sometimes, it is not just a single fungus, but rather a combination of fungi i.e. species under Pneumocystis, Candida, Cryptococcus, Histoplasma, Coccidioides, Aspergillus, and zygomycetes, which may produce concomitant and/or successive opportunistic systemic fungal infections3.

A 45 year old seropositive male, positive for HIV-1 on irregular ART since last 10months presented to ENT outpatient department of JSS Hospital, Mysore with 15 days history of pain while eating, fever, generalized itching & weight loss since 2months. On examination he was febrile(101 f), having an ulcer of the soft palate, bilateral cervical lymphadenopathy, macular lesions over skin of hand and back with mild hepatomegaly for which he was referred to dermatology department, he was admitted for treatment of fever.

FNAC cervical lymph node & Ultra sound guided FNAC of liver was performed, Cell block was made from the liver aspirate & material was sent for culture and showed the following findings.

Based on above findings diagnosis of disseminated opportunistic fungal infection with organism morphologically resembling yeast forms of Histoplasma was made. 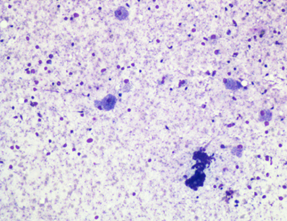 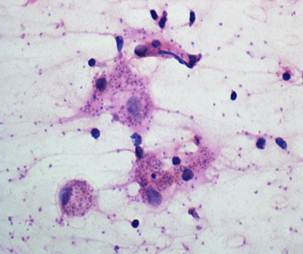 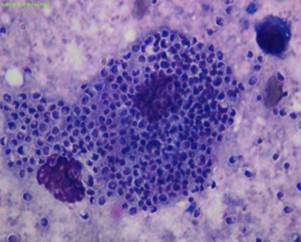 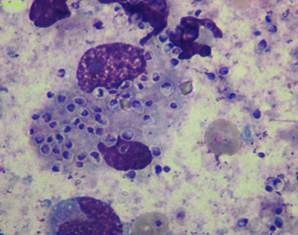 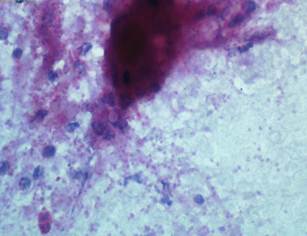 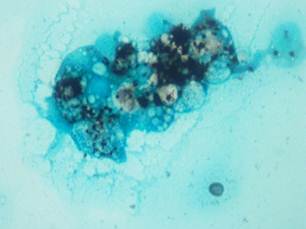 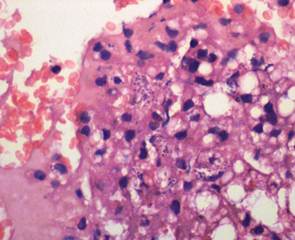 Patient responded to amphotericine-B injections & other symptomatic treatment with regularization of his ART treatment.

Since the material aspirated was less so culture showed no growth.

Specimen was send to PGIMER Chandigarh for species specific PCR which was negative for Histoplasma, candida, penicillium & emmonsia.

Lymph nodes in patients with HIV infection may contain fungi, atypical mycobacteria or many other microorganism without the usual indicators of these infections. HIV lymphadenitis may be associated with a spectrum of changes, ranging from florid lymphoid hyperplasia to marked lymphoid depletion. In the depletion phase, aspirates often have sparse follicular center cells, immunoblasts, and tingible body macrophages but high numbers of plasma cells12,13.

Differential diagnosis on cytology in seropositive patient: Since all the given below organisms can present with cervical lymphadenopathy, can involve liver, skin & known to cause disseminated infection, it is important to know cytomorphological features and special stain appearance of these organisms to differentiate them & coming to a proper conclusion.

• H. capsulatum- Small, uninucleate dimorphic fungus measuring 2-4 μm in diameter, found predominantly intracellularly or can be extracellular and is usually     present in clusters inside the cytoplasm of macrophages, with a light area surrounding the organism (pseudocapsule)14,15,16.

• P. marneffei- Spherical-to-oval yeast like organism found in macrophages, reproduces by schizogony (fission) with the formation of a prominent transverse septum15.

• Leishmania will not take PAS stain and is distinguished by a nucleus and bar-shaped kinetoplast lying often right angle to nucleus within each amastigote14,15.

This case illustrates the utility of FNAC in early diagnosis and management of rare fungal infections. Opportunistic infections can present with variable clinical spectrum, which should be considered while reporting on immunocompromised patients. Cytologists should be aware of cytomorphological features of opportunistic mycotic infections. Based on morphological characteristics organisms can be identified on cytology & confirmed by ancillary techniques. An interdisciplinary approach for diagnosis is almost always necessary.