Abstract:Introduction: With the increase in the awareness of breast cancer among women, cases of lump in the breast has increased in outpatient department. Fine needle aspiration cytology (FNAC) is the easy, quick and cost effective technique of evaluating breast lump. Objective: The present study, evaluated and compared the modified Masood's cytology index (MCI) with various other cytology grading methods and histopathology. Result: Modified MCI has over all concordance rate of 86%, sensitivity of 86%, specificity of 50%, positive predictive value (PPV) of 93% and negative predictive value (NPV) of 30%. Multiple regression analysis revealed an r2value of 60%, which was significant. The p-value of anisonucleosis, nucleoli and chromatin pattern were 0.001, 0.05 and 0.02 respectively, which was significant (p-value less than 0.05). Conclusion: Modified MCI will help the cytopathologist to accurately delineate both benign and malignant neoplastic breast lesions into respective categories. This in turn will help the treating surgeon to plan the treatment modality of the patients with lump in the breast. The study recommends that modified MCI method to be routinely incorporated for evaluation of all lump in the breast.

Breast cancer stands second amongst the most commonly diagnosed cancers worldwide. There is a sharp rise in the breast cancer worldwide that has resulted in 20% increased incidence and 14% increased mortality rate between 2008-2012. The most frequently diagnosed cancer among women in 140 of 184 counties worldwide is breast cancer. It now represents one in four of all cancers in women 1. Unlike other most commonly diagnosed solid cancers worldwide – lung, colorectum; breast cancer which presents as a lump can be easily palpated by the patient herself.2,3 By regular self examination lump can be detected at early stage, hence can ensure effective treatment.

Other methods of detecting breast cancer by non-invasive to minimally invasive techniques include mammography and FNAC respectively in developing countries. FNAC is the most cost effective, easy and quick technique of evaluating lump in the breast. The non-palpable lesions can also be evaluated by FNAC under the radiological guidance. Cytologist since long time knew the benefit of FNAC, to delineate the breast lesions between inflammation and neoplastic. In histopathology neoplastic breast lesions are broadly classified under four categories based on the risk of further development into cancer – non-proliferative breast disease (NPBD), proliferative breast disease without atypia (PBD without atypia), proliferative breast disease with atypia (PBD with atypia) and carcinoma. Studies have also calculated the risk of development into carcinoma - NPBD carries no increased risk, PBD without atypia has slightly increased risk 1.5-2 times and PBD with atypia has moderately increased risk 4-5 times. Patients who have carcinoms in situ have 8-10 times the risk of ultimate development of breast cancer.4-6

In our previous study, on evaluating the MCI, we shifted the score 9 and 10 from NBD category to ‘PBD without atypia’ after correlating with histopathology.11 We also further graded the ‘carcinoma’ category in comparison with Modified Bloom Richardson (MBR) histopathological grading (Table 2,3)12.

This was a prospective study of 121 cases of palpable breast lump that included both female and male over a period of three years. Patients with lump in the breast who were subjected to FNAC and subsequently to surgical excision were selected for the study. After the palpable breast lump was fixed between thumb and index finger, FNAC was done using 23G needle, fixed to a 10ml syringe. The aspirate was expressed and thinly spread on 4-5 clean dry glass slides. Haematoxylin-Eosin and Papaniculaou stains were used for the slides which were fixed in 95% ethyl alcohol. Air dried smear was stained with May-Grunwald Giemsa. Papaniculaou stained smears were subjected for grading since the nuclear morphology were better preserved13. Two independent blindfolded observers graded the neoplastic breast lesions, using HCG, MBG, RCG, MCI, Modified MCI based on respective cytological features. Wherever the scores differed between the two observers, the slides were reviewed for final score. Following surgery of these patients, the specimens were histopathologically examined and reported using gold standard MBR grading system 14. The results obtained by different cytological grading systems were compared with the MBR histological grading system. The concordance rate, sensitivity, specificity, positive predictive value (PPV), negative predictive value (NPV), multiple regression analysis and p-value of modified MCI were analyzed.

All the data were entered into Microsoft excel worksheet and analyzed using Epi-info package. 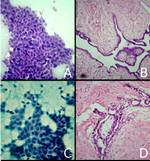 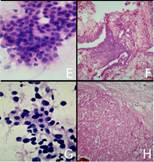 Out of 121 cases, based on MCI criteria, 62 cases were grouped under benign (NPBD, PBD without atypia), 3 cases under borderline (PBD with atypia), 50 cases under malignant (Carcinoma), 3 cases as inadequate and 3 cases as non-neoplastic lesions (Figure 1). All the 50 cases under ‘malignant’ category were further graded by HCG, MBG, RCG and modified MCI cytological grading methods.

There were 39/62 cases under N-PBD by MCI. On correlating with histopathology findings, the scores were modified, wherein score 6-10 were changed to score 6-8 with shift of score 9 and 10 to ‘PBD without atypia’. This led to shifting of 18 out of 39 cases from N-PBD to ‘PBD without atypia’, thus increasing the diagnostic accuracy.

‘PBD with atypia’, which comes under borderline breast lesions had only three cases by MCI grading. On histopathological examination one of them was diagnosed as carcinoma.

The number of breast carcinoma cases under different grades by HCG, MBG, RCG, modified MCI and MBR are tabulated in (Table 4).

To determine the significance of individual cytological features, multiple regression analysis of modified MCI was done (Table 5). The analysis revealed an r2value of 60%, which was significant. The p-value of anisonucleosis, nucleoli and chromatin pattern were 0.001, 0.05 and 0.02 respectively, which was significant (p-value less than 0.05).

Breast cancer is a leading cause of cancer death in the less developed countries of the world. This is partly because of shifts in lifestyles that is causing an increase in incidence and partly because of clinical advances to combat the disease which are not reaching women living in these regions.15

In India, according to National Cancer Registry Programme (NCRP), breast cancer is emerged as the leading site of cancer among women.16 In India for the year 2012; 44937 women were newly detected with breast cancer, 70218 women died of breast cancer 144937/70218=2.06=round it off to 2. So roughly, in India, for every 2 women newly diagnosed with breast cancer, one lady is dying of it. So, for India, with a death rate of 70,000 and ever increasing, even if the remedial measures start today, positive results will start showing not before the next 25 to 30 years at least.1 Therefore any breast lump in women should immediately seek for medical consultation for further evaluation.

In order to diagnose breast lesions, a triple assessment approach consisting of clinical evaluation, imaging and cytology has been adopted. FNAC is accepted for immediate reporting in outpatient department (OPD) since long time.17,18 Kocjan G, highlights the continuing role of FNAC in the diagnosis of breast lesions, because of its controversial inadequate rate and suboptimal accuracy. Excision biopsy of the lesion to establish whether it is benign or malignant is not an acceptable mode of diagnosis any more. When triple assessment is concordant, final treatment may be ensued without even open biopsy.19 .

There are several grading methods to evaluate malignant lesion of breast, but MCI facilitates to evaluate and categorize all breast lumps into benign, borderline and malignant groups.20 The modified MCI has further subclassified carcinoma cases into 3 grades in lieu with MBR histopathological grading system.

Under benign category, majority of the cases of N-PBD were fibroadenoma on histopathology examination. In addition to the MCI cytological criteria, the fibromyxoid stroma and anatomical borders of cell cluster were observed in most of the cases. Other cases under this category on histopathology were fibrocystic disease, which had cyst macrophages and apocrine cells in association with other cytological feature. Some of them had both fibroadenoma and fibrocystic features. On histopathology, in ‘PBD without atypia’ category majority were moderate to florid hyperplasia and papilloma.

Out of the 3 borderline cases, one of them was a case of breast carcinoma on histopathology. This false negative case could be due to the aspiration of material from the adjacent area of the malignant lesion while performing FNAC technique. This can be minimized by multiple aspirations from different sites of breast lump.

Similar to the Nottingham prognostic index that provides a useful guideline for deciding the systemic adjuvant therapy, studies revealed that neoadjuvant therapy can minimize the morbidity and enhance the prognostication in breast carcinoma.14,21,22 It mainly acts upon mitotically dividing cells. Administering neoadjuvant therapy to low-grade carcinomas leads to overtreatment and increased morbidity that can be avoided.9 Therefore neoadjuvant therapy with tamoxifen gives better result by rapidly decreasing in size when given to high-grade (Grade 3) than low-grade carcinomas (Grade 1).23 With the advent of neoadjuvant therapy, cytological grading of breast carcinoma has become a necessary component. International consensus conferences on breast carcinoma and The National Cancer Institute, Bethesda sponsored a conference on the "Uniform approach to report breast fine-needle aspiration biopsy" which have recommended that tumor grading on FNA material should be incorporated in cytology reports for prognostication.24,25

In all the cytological grading methods, nuclear features were invariably evaluated. The modified MCI, also proves that the nuclear features were the most important with p-value of anisonucleosis, nucleoli and chromatin pattern being 0.001, 0.05 and 0.02 respectively, which were significant (p-value less than 0.05).

Phukan JP et al and Nggada HA et al, had found the overall sensitivity and specificity of 72.2% & 97.5% and specificity of 100% & 98.7% in cytological grading of breast carcinoma respectivily.33,3In present study, which includes both benign and malignant breast lesions has a overall sensitivity of 86% and specificity of 50%. The concordance rate of MCI could not be calculated earlier, because of lack of further grading of cytology smears under malignant group. But with further splitting of MCI scores, the carcinoma category was graded into three groups similar to MBR grading and thereby had a high concordance rate of 86%. Modified MCI also had a good sensitivity, specificity, PPV and NPV in comparison with other cytological grading methods.

Cytological grading of breast carcinoma not only helps the treating surgeon in planning the treatment, but can also be utilized in other studies like hormone receptor immunostaining, genetic instability, immunocytochemical analysis and morphometry.

There is a need for early detection of breast carcinoma by easy, quick, reliable and cost effective technique which was fulfilled by FNAC. Unlike RCG, which grades only malignant breast tumors, modified MCI will help the cytopathologist to accurately delineate both benign and malignant neoplastic breast lesions into respective categories. This in turn will help the treating surgeon to plan the treatment modality of the patients with lump in the breast. The study recommends that modified MCI method to be routinely incorporated for evaluation of all lump in the breast. It is also necessary that the modification needs a multicentric evaluation with large number of cases.