Abstract: Introduction: Global deaths of children aged less than five years from diarrhea have been estimated, resulting in about 800 000 fatalities worldwide annually, most occurring in sub-Saharan Africa and south Asia. More than 80% of these deaths occur in Asia and Africa (46% in Africa alone). Objective: The aim of this study was to assess attitude of mothers towards diarrhea management and prevention in under five children, in Fenote Selam Town, West Gojjam Zone, Amhara, Northwest Ethiopia, 2014. Methods: Community based Cross-sectional study was conducted from April-May 2014. The sample size was 846. Multi-stage sampling technique was employed to select sampling kebeles. Simple random sampling technique was used to select study units. Pretest was done in none sampling kebeles. Data were entered into Epi-info (version 3.5.1) statistical software package and then exported to SPSS software package version 16.0 for further analysis. Results: A total of 830 mothers were participated in the study. Overall, 416(50.1%) of mothers had favorable attitude. Of these, 337 (40.6%) of mothers had favorable attitude towards ORS usage and 192(23.1%) of mothers had favorable attitude towards immunization to prevent diarrhea. Conclusion: Overall, half of mothers of the Fenote Selam community had unfavorable attitude towards diarrhea management and prevention.

Global deaths of under five children from diarrhea have been estimated 800 000 [1]. More than 80% of these deaths occur in South Asia and Africa (46% in Africa alone) [2]. Although diarrheal mortality remains high, it is decreasing by 4% per year [1], and incidence is declining more modestly [3]. To guide these effort, robust data characterize the burden, risk factors, microbiological a etiology, squeal and case fatality of most life-threatening and disabling episodes are essential; heretofore, such data have been scarce in regions with the highest child mortality[4].

In Sub-Saharan Africa primary caregivers display poor perception about the signs of dehydration, dysentery and management of diarrhea [5]. The attitude of parents and caretakers towards the disease management vary with their perception about its seriousness especially on young children and health care-seeking practices of the primary caretakers of children < 5 years of age [6].

The purpose of this study was to assess attitude of mothers towards diarrhea management and prevalence in under five children, in Fenote Selam Town, West Gojjam Zone, Amhara, Northwest Ethiopia.

A community based cross- sectional study was conducted.

All mothers in the reproductive age group who had under five children were included in the study. Mentally ill, seriously ill, mothers who had hearing and speaking difficulties were excluded from the study.

By using design effect it was multiply by 2

10% of none response rate 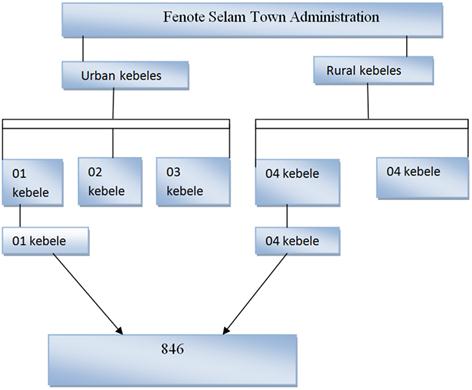 Each completed questionnaires were coded on pre-arranged coding sheet to minimize errors. Data were checked again for its completeness. The data were entered into Epi-info (version 3.5.1) statistical software package and then exported to SPSS software package (version 16.0) for further analysis. Ten percent of the responses were randomly selected and checked for the consistency of the data entry. Data cleaning process was done by running simple frequency for its consistency.

Ethical clearance and approval was obtained from DMU, College of Medicine and Health Sciences Ethical Review Committee (IRBs). The Ethical Review Committee wrote official letter to Fenote Selam Town Administration, and then it was communicate at each level. Written information was obtained from study participants. Confidentiality of information was assured.

Table 3. Mean value and level attitude of mothers towards diarrhea management in under five children.

This study showed that the mean value of attitude questioners was 66% and 50.1% of the mothers had favorable attitude for diarrhea management.

Another study showed that < 20% of mothers had favorable attitude towards preventive measures of diarrheal: like nutrition, medication, breastfeeding, proper disposal of human waste, and vaccines [9]. Similarly, in this study mothers believed that exclusive breast feeding is used as preventive and treatment factor for diarrhea. Frequent breast feeding can protect dehydration and minimize diarrheal episodes. In addition, 40.6% of mothers strongly agreed that ORS can treat and prevent dehydration, and 45.3% of mothers agreed that ORS can treat diarrhea and prevent dehydration. Contrary, study done by Papikyan et al. indicated that 46.3% of the mothers agreed that breast milk can cause diarrhea [10]. This might be due to the difference in educational level of the mothers, lack of experience in diarrhea and its management, and less prevalence of diarrheal disease in their community.

Other study explained that 73% of mothers believed that decreasing food /drink frequency at the time of diarrhea is beneficial for the child [11]. Similarly, in this study 4 mothers believed that avoiding food, fluid and decrease breast feeding are helpful to stop diarrhea. This may be due to lack of information towards impact of diarrhea, benefit of breast feeding and fluid replacement to manage diarrhea. The other reason may be due to low educational status of mothers.

This study showed that 85.9% of mothers had favorable attitude towards the use of ORS to manage diarrheal. They believed that ORS is the preferable treatment of acute diarrhea, a means to prevent dehydration and correct electrolyte imbalance. This is higher as compared to studies conducted in Nigeria which indicated that 39.3% of participants believed that the use of ORT alone for the management of acute diarrhea, but only 15% did so in actual practice[12]. Contrary, the study carried out by showed that 77% of the mothers believed that only ORT was not enough as a treatment, and 23% of the mothers agreed on using ORT alone without antibiotics. While 99% of mothers agreed that there were no side effects behind its use [13]. This could be due to lack of health education and low level of maternal education.

The study conducted in Kenya revealed that almost all caregivers believed that ORS was superior to home-prepared solutions by citing a variety of reasons. One among reasons is that ORS is packaged and thus considered safer and free of contaminants, contains sugar which is necessary for home-prepared solutions though it attracts insects. They also emphasized that ORS is developed by experts and, therefore, believed to contain special therapeutic ingredients, which makes it more effective in reducing or stopping diarrhea [14]. This is comparable to the present study which accounts 85.9%.

About 67.15% of mothers believed that mixed breast feeding does not causes diarrhea. Instead, they thought that it was important for growth, development and body defense mechanism. About 51.4% of mothers thought that supplementary feeding should be started before 6 months because breast milk was not enough for growth and development. Evidence couldn’t find to comparable this study.

Single marital status, divorced and widowed had unfavorable attitude towards diarrhea management and prevention as compared to mothers who have married. This may be due to their husband’s knowledge and maternal experience. However, unmarried women may not have such accesses.

Housewife mothers had also unfavorable attitude towards diarrhea management and prevention as compared to mothers who had governmental employee. Obviously governmental employee mothers were educated, and have opportunity to get information about benefits of breast feeding, fluids and hygiene. This can be through peer discussion, news paper, and magazine and by social media.

Our deepest gratitude goes to Debre Markos University, Medicine and Health Sciences College for proper review and approval of this paper. We also thank Fenote Selam Town administration officials and data collectors for their cooperation and assistance.