Knowledge, Attitude and Practices on Diabetes Among Type 2 Diabetic Patients in Iran: A Cross-Sectional Study

Abstract: Following fast increase in the incidence of type 2 diabetes among Iranians, diabetes self-care activities are important. This cross-sectional study was carried out to evaluate the knowledge, attitude and practices regarding diabetes among 100 Iranian type 2 diabetics (61 female, 39 male) aged between 37 to 66 years, attending the out-patient Diabetes Clinic at Golestan Hospital, Ahvaz, Iran. A face-to-face interview was done and a validated knowledge, attitude and practice (KAP) questionnaire was used to determine knowledge, attitude and practices of diabetes patients. The mean duration of diabetes among patients was 4.05 ± 1.4 years. Fifty three percent of patients had good glycemic control (HbA1c level (=<7%)). The results showed that attitude related to diabetes was acceptable in the majority; while knowledge and self-care practices were insufficient. The overall mean (± SD) score of the knowledge, attitude and practice of patients based on KAP questionnaire was in medium level (17.37± 2.23) in which total maximum possible score was 29. KAP score was low for 9 % of patients. There was significant association between low level of education (primary) or not having formal education with poor KAP score about diabetes compare to higher level of education [illiterate: OR=2.6, 95% CI= (0.23-30.80), primary: OR=0.23, 95% CI= (0.43-1.27), P<0.05]. While there was no significant association between the KAP scores and HbA1c level. As the consequence of low awareness of diabetes among patients affects their ability of self-care management and lead to negative impact on outcome of diabetes. Patients need to be educated on how to prevent diabetes complications. Health care providers should promote self-care activities in the process of diabetes education.

Diabetes is a common chronic illness in almost all countries [1]. Throughout the last twenty years, the incidence of diabetes has been raised intensively in many parts of the world [2]. It is estimated that there are nearly 346 diabetes patients globally [3]. In Asia, the rise in prevalence of type 2 diabetes is even more distressing with increased occurrence among young adults [4]. A national survey in Iran indicated that the incidence to be 7.7% in adults 25–65 years [5]. Its prevalence is predicted to increase to 5.1 million by 2025 [6]. Lifestyle and environmental factors are the main causes of the extreme increase in the incidence of type 2 diabetes [7]. This rapidly-rising prevalence among developing countries is recognized to be the effects of urbanization [8,9].

Diabetes may increase the risk of microvascular and macro vascular complications and early death in the general population and lead to a vast economic problem for society [10,11]. However, by the existence of high prevalence of diabetes, diabetes awareness and management still are major challenges in Iran. Adverse attitudes and psychological problems such as depression are common among diabetes patients and can led to poor diabetes management [12,13].

This cross-sectional study was carried out to define level of knowledge, attitude and practices regarding diabetes among 100 type 2 diabetes patients attending to the diabetes clinic in Golestan hospital in Ahvaz a city in southwest Iran during the study period of August to October 2013. After receiving approval from the Ethics Committee of National University of Malaysia (UKM), Face-to-face interview was done. Subjects were selected from type 2 diabetes patients aged more than 30 years and diagnosed with diabetes more than one year. Upon screening, patients were given an information sheet which explained the purpose of the study, participation was voluntary and they were able to refuse participation in or withdraw from the study. Only the patients who met the inclusion criteria and signed consent form were recruited to participate in this study.

A KAP (Knowledge, Attitude & practice) questionnaire which was developed and validated by Mukhopadhyay and her colleagues [16] used and pre tested on 10 patients. The reliability of the questionnaire was considered satisfactory after discussion with experts. This modified questionnaire was then used to interview with the type 2 diabetes patients.

Questionnaire consisted of 13 questions on general knowledge of diabetes, eight questions for attitude and eight questions for the practices regarding diabetes self-care and management. Each correct answer was given a score of ‘one’ and each wrong answer inclusive of ("don’t know") was given a score of ‘zero’. The maximum possible score for knowledge, attitude and practice of patients were 13, 8 and 8 respectively. Those who scored 75% and above were considered as having adequate knowledge/good practice and those with a score of 50 % or less is taken as having inadequate knowledge / poor practice, those who racked up between 51-74% was considered as having moderately adequate knowledge/ practices).

The Statistical Package for Social Sciences (SPSS®) version 21 and Microsoft excel spreadsheet were used to analyze data in this study. Descriptive statistics including frequency, means and standard deviation were applied to present subject’s demographic information and KAP score. Binary logistic regression was used to determine the association between KAP score and level of HbA1c. A multiple logistic regression analysis adjusted with education, age, duration of diabetes, gender & income was carried out to define the effects of multiple factors on Poor KAP score. The associated 95% CI, and P<0.05 was considered as the significant level.

Thirty patients supposed that diabetes characterized by high sugar intake, 16 patients (14%) stated that it is due to failure in insulin secretion and 56 % did not have any idea on this matter. All of the patients knew that both genders could be involved with diabetes. Frequent urination was indicated as the most common symptom of diabetes by 81 patients (81%). Regarding complications of diabetes, awareness of heart disease was stated to be the highest in 72 patients (72%) followed by eye disease (17%), kidney diseases (6%) and foot problems in 5%. Healthy diet was indicated to be the most important lifestyle factor that could help in prevention of diabetes. Knowledge of other lifestyle factors was not good (Table 1).

Patients who passed primary level of education or didn’t have any formal education 0.23 and 2.6 times respectively more likely to report a low score of diabetes knowledge compared to those who passed secondary level of education. There was no significant association between the KAP scores and HbA1C level based on binary logistic regression (OR =1.10, 95% CI= (0.92-1.32), P= 0.258).

Attitude toward dietary modification was favorable in 74% of diabetics, but for the exercises were 48%, meanwhile 47 % patients believed that when diabetes is controlled, dietary management is not essential and 68% felt that insulin was the last option for treatment (Figure 1).

Table 4. Mean score of knowledge, attitude and practices of the diabetic patients based on KAP questionnaire (n = 100).

Regarding their self-reported practices during the last month only 10 % of patients had a good medication adherence (>5 days/week) based on doctor’s prescription. Nearly 27% of the patients modified dietary habits, as prescribed by dietician. Only 33 persons (33%) checked their foot and eye in the last 1 year by specialists.

The practices regarding physical activity and blood glucose monitoring were found to be poor (Figure 2). The most sources of information regarding diabetes were by health care personnel (50%) followed by family members (32%) and media (18 %). 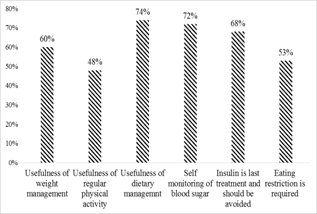 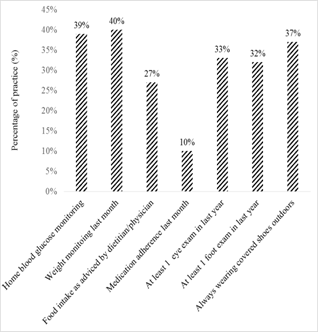 It is well established that patient contributions are very important for better management of diabetes [18]. Lack of knowledge of diabetes care among patients can have adverse effects on their capabilities to control diabetes. Heart disease has been indicated as the most common complication of diabetes by 72% of the patients. Awareness of measures to identify primary complications of diabetes, such as blood pressure monitoring, periodic eye examination were poor, which reveals the need for some aspects to be focused in diabetes education programs.

Throughout knowledge assessment, we recognized that most patients didn't know about cause of diabetes and its consequences (nearly 86%). Only a few of the patients knew that one of the common complications of diabetes is kidney disease (6%). Insufficient awareness of complications and the importance of lifestyle modification was very obvious among patients and only 2% of them had good knowledge of diabetes.

Poor knowledge regarding diabetes has been reported in several studies from the developing countries [19, 20, 21]. While, another study in England as a developed country, also stated poor knowledge of diabetes among ethnic groups [22]. In our study, Primary education level was significantly associated with low diabetes KAP score. This may be described by the point that educated people had better access to numerous source of written informative materials.

It is a hypothesis that good KAP have impact on adequate diabetes control. However there was not any significant association between KAP score and glycemic control in this study. This result was similar the result of study among Malaysian diabetes patients [21]. Most patients in our study reported checking of blood sugar only by doctor in every three months visit; this low frequency of blood sugar self-monitoring may have effect on blood sugar control.

Awareness on lifestyle modification regarding weight management was low in this study. Some surveys have indicated that higher education was significantly associated with a better awareness [23] . The poor awareness of diabetes patients in this study might be due to the low level of education and the lack of organized diabetes education services in the diabetes clinic. Attitude regarding dietary modification and regular physical activity was acceptable in the majority. This survey discovered that diabetic patients rely mostly on drugs to control their diabetes. Therefore, better management and more effective use of health resources is very important. There are multiple barriers for the enhancement of the quality of diabetes care. These may be related to the financial statement of patients, lack of knowledge among health care providers for patient management and inadequate access to special care(23 ).

Knowledge is an essential requirement for better compliance with medical therapy [24]. Awareness of complications of diabetes was not good among the patients in this study. This may be due to the some factors such as inappropriate ways of providing information and lack of time due to the patient loads and lack of well trained staff like educators [25]. This highlights the needs for effective diabetes education programs in developing countries like Iran. Other factors, such as health beliefs and demographic characteristics of patients have been indicated as possible links among awareness and adherence to the recommendations regarding lifestyle modifications [26].

There are not appropriate diabetes education programs in most governmental hospitals in Iran and the existing programs are weak. It has been stated that knowledge regarding diabetes among the general population and diabetics are still insufficient in Iran and a good diabetes education program is instantly required [27]. It has been also reported in a study from Pakistan that appropriate educational program can have effect on the attitude of the people about diabetes [28]. Another study showed that serious diabetes education can improve glycemic control and quality of life of diabetic patients [29, 30].

In conclusion, this study revealed a medium level of knowledge, attitude and practice for the majority of diabetes patients in Ahvaz, Iran. Diabetic patients usually are dependent on drugs for disease control while ignoring other healthy lifestyle modifications in practical. Low awareness about the diabetes among patients, affects their ability of self-management and therefore have a negative impact on outcome of diabetes. This recommends the necessity for an awareness program, patient counseling and education on self-care management of the diabetic patients to improve their knowledge regarding diabetes with the emphasis on lifestyle modifications.

No financial support for the study. No grant was given to the study. The authors declare that there is no conflict of interests.