The Epidemiological Features of Amputations at the University Teaching Hospital in Lusaka, Zambia

Abstract: Introduction: While major limb amputations are reported to be a major surgical procedure that is a preventable public health problem, they are associated with profound economic, social and psychological effects on the patient, family and the country at large. There is however, limited data on the epidemiological features of amputations in developing countries where the impact is huge due to poor prosthetic services and unaffordable costs where services are available. The aim of the study was to determine the epidemiological features of amputations done at the University Teaching Hospital in Lusaka, Zambia. Methods: Data was collected using a checklist. The study was retrospective and descriptive in nature. Convenient sampling was used on records of patients who underwent major limb amputations between 2013 and 2014. Results: Out of 84 records that were reviewed, the commonest indication for amputation was trauma 29.8% (n=25), followed by Diabetic complications 21.4% (n=18) and the prevalent age group was 31-50 years 35.8% (n=30). Men were the most affected (70.2%; n=59) giving a ratio of 2.3:1. Lower limbs were more frequent 75% (n=63) than upper limbs 25% (n=21) ratio 3:1. Above knee amputation was the commonest procedure accounting for 45.2% (n=38) cases. Conclusion: Trauma and diabetes were the common indications for amputations at the University Teaching Hospital in Lusaka, Zambia and mostly affected is the productive age group of 31-50 years. Given that both are non-communicable conditions we can conclude that the majority of the amputations could have been prevented with the behaviour change and adherence to traffic regulations by drivers, more road safety education for road users, health education, early presentation and intervention on patients plus appropriate management of the common indications.

Limb amputation is one of the most ancient of all surgical procedures with a history of more than 2500 years dating back to the time of Hippocrates [1]. Amputations are usually the result of complications of diabetes, peripheral arterial disease (PAD), trauma, and malignant tumours often complicated by infection [2]. The leading cause of amputation has changed in the recent past given the increase in non-communicable diseases (NCDs). While major limb amputation are reported to be a major surgical procedure that is a preventable public health problem, it is associated with profound economic, social and psychological effects on the patient and family. This is more so in developing countries where the prosthetic services and accessibility to some social services facilities are limited. The International Diabetic Association [3] has reported that some studies done in Africa have shown that trauma and diabetes are leading causes of amputations. In a study done in Nigeria, outcomes revealed that diabetes related complications were the leading cause of non-traumatic limb amputations followed by complications of traditional bone setting. Males were reported to have been more affected than women [4]. Omoke at el [5] in their study also done in Nigeria, reported that over 50% of amputations were as a results of trauma. This is similar to outcomes of a study conducted in Tanzania [6] were diabetic related complications were a second leading factor to amputations and again, more males were affected than women were. Similar outcomes have been reported in a study done in Zambia [7] where there has been a rapid increase in NCDs, which include mental health, diabetes, cardio-vesicular diseases, road traffic crashes and violence [8-11]. In relation to diabetes, some authors [12-14] have reported that Sub Saharan Africa is experiencing a rapid increase in type 2 diabetes mellitus. Ojuka & Goyaram [12] have stated that the increase is from less than 1% in 1960 to 4.3% in 2012 and currently estimated at 6.4%. Mbanya et al [14] have cautioned that Africa Region is expected to see the greatest increase in diabetes from 19.8 million people in 2013 to 41.4 million in 2035 should the current trends persist. In Zambia there has been an increase in the prevalence rate for diabetes, cited to have been at 3.1% in 2010 [3] with another 266,900 persons diagnosed with diabetes in 2014 as reported by the International Diabetes Foundation [15]. This study therefore set out to determine the common epidemiological features of patients who had major limb amputations at the University Teaching Hospital (UTH) in Lusaka, Zambia between January 2013 and December 2014.

This was a retrospective cross-sectional study design conducted at the UTH. Ethical approval was obtained from the University of Zambia, School of Medicine Undergraduate Research Ethics Committee (UNZASOMUREC). We conveniently sampled records of patients who underwent major limb amputation during the stated 24-month period. These were defined as amputations that involved arms and legs except amputations below the wrist and the ankle joints. A data capture sheet, which comprised a demographic component and details of the amputation, was used to collect study information and descriptive analysis of the data for trends was done using SPSS version 20 for windows. 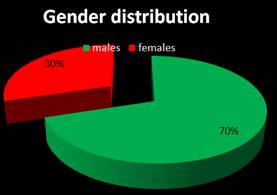 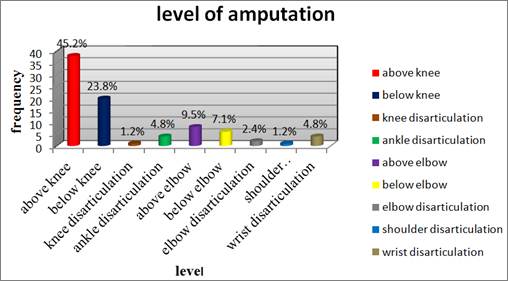 3.4. Distribution for Age in Relation to the Indications for Amputation

Table 1. Age in relation to indication.

Table 2. Limbs amputated in relation to the indication.

3.5. Distribution for Limbs Amputated in Relation to the Indications

The records for this study highlight that most patients that underwent major limb amputations were aged between 31-50 years, which is similar to other studies done elsewhere [16-17]. Other studies [18-19] have reported even a lower peak age incident than that of our study. For Zambia, the peak age represents the productive age group whose contribution to the economy would be optimum without the physical and psychosocial disability that accompanies amputation, particularly in a developing country like Zambia. This is more so, given the infrastructure and social sector limitations that increase the challenges of disability and handicap for some of these patients.

In this study, trauma was a major contributor to amputations and males were predominately affected, an outcome that is similar to the findings from others studies [6,20]. In most developing countries, there is more likelihood for males to take professions like being a truck driver, bus driver or working in the mines. Persons in these professions are more likely to be involved in trauma especially road crashes. This would possibly explain why more males in our study had amputations resulting from trauma.

Evaluation on road crashes in developing countries [11] has shown a high incidence of road crashes and injuries among pedestrians who frequently use heavily populated roads. This is often compounded by the fact that there are no reserved walkways for pedestrians. Country specific reports for Zambia have also reported the same [8-11]. In our study, records showed that majority of patients were unemployed. Although, the variable did not contribute significantly towards predisposition to amputation it is assumed that most patients were road users such as pedestrians and may have been involved in one way or another in road crashes that led to these amputations.

As reported in other studies [21-23] trauma was the most common indication for amputation in this study. However, this outcome is also different from studies that reported diabetes related complications as the leading cause of amputations [4,6]. This again underlines the fact that NCDs are contributing significantly towards amputations.

Above knee amputation (AKA) was the most common procedure performed seconded by below knee amputations (BKA), this is similar to what was reported by Tembo [22] and Chalya [6] whose studies affirm that AKA is a commonly performed procedure. However, in an earlier study BKA was reported as the most common procedure performed [23]. In relation to the upper limbs, above elbow amputations are reported to be common [17,21]. Our study shows that most amputations were that of the lower limbs. This finding confirms the earlier findings that lower extremities are injured more often than the upper extremities and that diabetic gangrene is common on the lower extremities than elsewhere on the body [6,17,18].

This study was limited to a two-year review. More years could have given a better presentation of the situation given the high number of diabetes and trauma related injuries. As a retrospective study there were challenges retrieving patients’ data. We recommend the need for an additional electronic storage of patients’ files. Health practitioners also need to pay particular attention to public health education concerning predisposing factors in order to reduce on complications of diabetes. Further, all stakeholders also need to pay close attention to predisposing factors related to road crashes and adhere to road safety regulations.

The most common indications for major limb amputations done at UTH were trauma and diabetes related complications. Given that, both are non-communicable conditions, we can conclude that the majority of the amputations could have been prevented with the behaviour change of drivers, more road safety education by road users, health education, early presentation and intervention on patients plus appropriate management of the common indications. Additionally, a change in life style behaviour that predisposes to traumatic injuries such as driving while under the influence of intoxicating substances such as alcohol needs to continuously receive stringent attention by road users and regulators.