Current Status and Perception of Acne Among Chinese Adolescents: A Community-Based, Cross-Sectional Study

Acne is often misunderstood by lay people, and even the medical community, to be merely part of growing up and a cosmetic problem, while increasing evidence has revealed that acne is not a common dermatologic disease; it can produce a significant psychosocial burden1–6 and be comparable with such disabling maladies as asthma, epilepsy, diabetes, back pain, and arthritis7.

Although the prevalence of acne varies among different populations in different studies1,3,8,9,it is very common among teenagers10,11. Adolescence is an important and vulnerable period in most people’s lives, as it is the time of transition from the dependence of childhood to the independence of adulthood, so this group is vulnerable both socially and psychologically. Since they are neither mature psychologically nor knowledgeable about acne, the potential harm of acne to adolescents is significant. Therefore, epidemiological studies on acne must befocused mainly on adolescents.

It is necessary that epidemiological studies of acne determine whether there is a need to educate both those affected and those health providers caring for them8. In this paper, we inquired about the current status of acne among adolescents in China, including prevalence, severity, treatment, efficacy of treatment, and psychological impact, and provided data to health providers to decide whether it is necessary to institute acne health education among adolescents.

Many studies have been designed to investigate the effect of acne on the quality of life among adolescents and the related risk factors, although few have been undertaken to research how this segment of the population perceives acne3,6,7,8,12–14. A recent worldwide study of patients with acne found that 50% reported that they knew little or nothing about the condition15. Lack of knowledge about acne may cause adolescents to delay treatment or to take inappropriate measures, resulting in physical or psychological damage. Therefore, it is necessary to understand the existing perceptions of adolescents about acne in order to improve their knowledge of this disease. This study should encourage the health educator to institute health education programs suitable for adolescents.

The purpose of this paper was to survey the current status and perceptions of acne among adolescents in Beijing, China, in order to promote the succedent health education regarding acne.

Communities were selected from random samples of schools in Beijing. To prevent loss of sample, random cluster sampling was adopted, taking a class as a unit. The study was granted ethical approval by the Ethics Committee of Beijing Chuiyangliu Hospital, and the students were informed about this survey before answering the questionnaire.

The students were asked to complete a self-administered, multiple-choice questionnaire, using as a reference one employed in previous acne epidemiological studies1,5,8,16. Some questions were designed specifically for Chinese people. Instructionson correctly filling out the questionnaire were provided by the same researcher before the survey.

The questionnaire contained three parts: general information (gender, age, grade); perceptions about acne, including awareness of acne, harm to the skin, risk factors, opinions, preferred acne treatment, and source of knowledge; and current status of acne (prevalence, severity, treatment, efficacy of treatment, and psychological impact). Acne severity was represented by the forms of acne shown in distributed photos. Objective evaluation by a dermatologist present in the room was impossible because of school time limits.

Statistical analysis was performed using SPSS 17.0 for Windows (SPSS Inc, Chicago, IL, USA). Relationships between boys and girls and senior and junior high school students were assessed via contingency tables using the χ2test. A level of p < 0.05 was considered statistically significant in all the analyses.

3.1. Current Status of Acne Among Adolescents

We investigated the expression of the three forms of acne (comedo, papule, pustule) and scar, representing the degree of acne from mild to severe. Comedo was the most common form of acne among adolescents (37.8%). Boys tended to present papules more than did girls (p < 0.05), and there was no difference between senior and junior high school students in the presentation of comedo, papule, pustule, and scar (p > 0.05).

3.2. Perceptions of Acne Among Adolescents 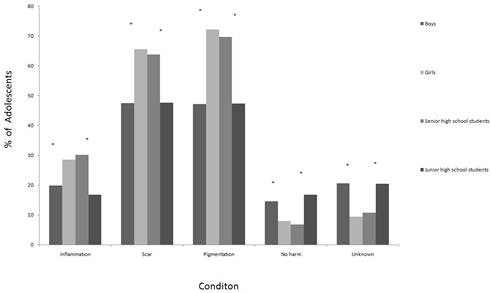 Fig. 1. Knowledge among adolescents of potential acne harm to skin. There was a difference between boys and girls and between senior and junior high school students (*p < 0.05). 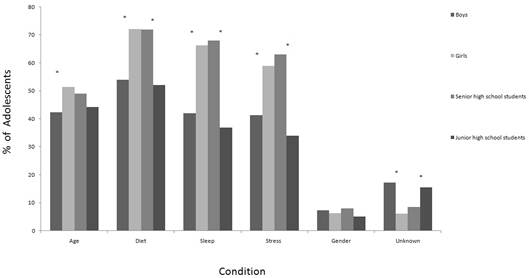 Fig. 2. Knowledge among adolescents about acne risk factors. There was a difference between boys and girls and senior and junior high school students (*p < 0.05).

For treatment, 35.2% of adolescents thought they should go to hospital for acne, while 29.9% thought that there was no need for any treatment. There were statistical differences in treatment opinions between both genders and both grades (p < 0.05, Fig. 3). 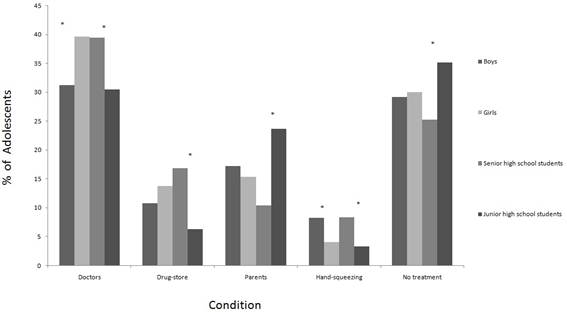 Fig. 3. Opinion of acne treatment among adolescents. There was a difference between boys and girls and senior and junior high school students (*p < 0.05).

As for the intended measures, proper diet was the first choice checked by most adolescents (41.8%), followed by topical medication (26.4%), and oral medication (8.2%). All the treatment preferences in this study were statistically different between both genders and grades (p < 0.05, Fig. 4). 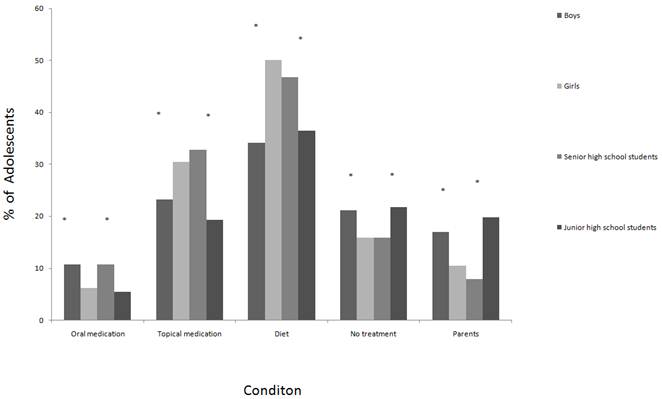 Fig. 4. Preference of acne treatment among adolescents. There was a difference between boys and girls and senior and junior high school students (*p < 0.05).

Few (16.8%) adolescents with acne went to hospital for treatment, 16.0% went to the drug store, and 24.3% were treated by their parents or themselves. Almost half of the adolescents (46.1%) opted for no treatment, and junior high school students ignored treatment more often than did senior high school students (53.4% and 42.4%, respectively, p < 0.05). Girls got medication from the drug store by themselves more often than did boys (p < 0.05).

Acne is a very common disorder in adolescents — confirmed again by this study — having a prevalence of 54.7% in this representative sample of 12-to-18-year- olds. This is compatible with the prevalence of 59.5% reported in a recent Japanese study3, but lower than that of other studies17,18. This difference might be related to ethnicand geographical differences. Self-reporting or diagnosing by a dermatologist in the discerning of acne may also explain some differences between studies. For example, Kubota et al3, targeted a sample of Japanese teenagers, the same race as our study sample, and also used the same self-reporting method to evaluate the prevalence of acne, whereas Tan et al.17 and Yahya 18 reported a prevalence of 88% and 90.7%, respectively, in Singapore and Nigeria, which are located in tropical areas. Yahya 18used an investigator rather than a self-reporting method.

We found that almost half the teenagers with acne did not undergo any treatment, and only 16.8% were treated by doctors, which was less than that reported by Shen et al19. and Law et al20. They preferred to buy medicine by themselves or squeeze the pustules by hand rather than seek help from doctors. These may indicate that the treatment of acne among the studied adolescents was delayed and that inappropriate methods were adopted widely. Similar results were found in some studies in which the majority of patients had no treatment for acne, thus treatment was postponed or the patient was self-treated16,21, however, in contrast, in Al Robaee’s study, most of his sample (40.3%) sought medical advice within the first 3 months18. Otherwise, most adolescents were willing to regulate their diet to treat acne, but were strongly opposed to taking medication. The preference of acne treatment was different according to age and gender, which was useful information for subsequent health education.

This variability in treatment-seeking behavior may be related to underlying deficiencies in knowledge and beliefs about acne and the misunderstanding of acne treatment, assome studies reported1,21,limited knowledge about acne is likely to impede seeking help. In the present study, among girls and older teenagers, the knowledge on acne, such as harm to the skin and risk factors, was better than that among boys and younger teenagers,which was supported by the study of Darwish23.This may explain why older teenagers and girls were more inclined to adopt some measures to deal with acne, even though these measures were not appropriate. These finding ssuggest that there is still room to improve teenagers’ knowledge regarding risk factors and acne’s harm to the skin. Correct therapy of acne should be imparted to adolescents through health education.

Furthermore, the lack of family doctors in China might be the cause of this low level of knowledge and inappropriate treatment of acne. Adolescents with acne should see a dermatologist in a large hospital, which might be intimidating. A heavy scholastic burden might be another reason for studentspreferring to buy OTC medicine rather than counseling with doctors.

An interesting finding in this study was that most teenagers believed acne should be treated by doctors, similar to Poli’s study24, yet many chose no treatment and few sought help from the doctor. It is generally believed that it is easier to increase knowledge than to change behavior. Some studies have reported increases in knowledge without an intention of, or actual, improvementin behavior25. In our previous study, the same phenomenon was observed26. We called this phenomenon a "knowledge–behavior gap." In spite of the difficulty of changing intended or actual behavior26,27, we are still trying to make acne treatment more accessible to students, for example, through regular acne examinations by a school physician. Since younger teenagers are more dependent on their parents for treatment, it is necessary that parents be well informed about acne.

We found that over half the adolescents experienced a psychological impact from acne, in agreement with other studies1,3,27. However, some were unaware of the harm of acne or believed no harm could ensue from acne, especially boys and younger teenagers, thus did not worry about it. We theorized that this was because of their low level of knowledge about acne rather than having the correct knowledge about acne, just as an old Chinese saying says: "Knowing nothing, fearing nothing."

In our study, adolescents most frequently obtained general information on acne from parents, which is opposite to the findings of some studies16,27,28, in which doctors were the primary source of acne information. The main source of acne knowledge among the adolescents was not doctors, but their parents, who are closest to adolescents. We concluded that the reasons might be the difficulty of seeing dermatologists and the lack of family doctors in China. Furthermore, dermatologists might fail to provide health education about acnebecause of heavy clinical loads, suggesting that it is necessary for parents to have a high level of acne knowledge. However, the question arises as to why teachers and school physicians — who are also close to the adolescents — are not the main source of acne knowledge. Two answers might be that (1) their heavy study burden allows teachers no time to provide health education for their students, and (2) acne knowledge is deficient among teachers and school physicians. Therefore, teenagers must obtain information about acne from parents, classmates, or the Internet. This finding suggests that we should provide more health education about acne in school, which will be the focus of our next work.

Limitations of this study include investigating only a localized study population and not doing face-to-face interviewing. The study was carried out in schools located in only one district of Beijing, thus the result does not represent the whole population in Beijing, let alone China. Of course, the study subjects represented a group of adolescents having a high level of knowledge and living in the most developed city of China. Therefore, we conclude that adolescents in China possess a low level of acne knowledge.

The authors thank the subjects involved in this study for their cooperation and all investigators and dermatologists for their hard works and valuable contributions.

This study was supported by the Social Development Plan (Project No. SF1413) of Chaoyang District, Beijing, China.