Abstract: The incidence of spina bifida (SB) is known to differ among regions. Very little has been reported about the relationship between the incidence of SB and ethnic patterns of origin in Zambia except for the general impression that it is prevalent. The aim of the study was to establish the ethnic pattern of origin of children with SB in Zambia. It was a retrospective cross sectional study. Using a checklist, data was collected from clinical files of children with SB from the University Teaching Hospital (UTH) and Beit Cure Hospital (BCH) from 2001-2010. Descriptive statistical analysis was done in SPSS version 17. A total of 253 children with SB were identified of whom 88 (35%) of them originally came from the Southern Province of the country while the lowest province was the North-Western Province with 7 (3%). Further, a total of 77 (30%) children were referred from the Southern Province of the country and the lowest province that was represented was the North-Western Province with 5 (2%). Observed is the evidence that SB is very prevalent in the Southern Province of the country. With the presence of Uranium in the Southern Province of Zambia, a serious study ought to be done to investigate the possible link of the pollutant with the prevalence of SB in the region. It is essential that the government looks seriously at Uranium Mines being operated in the Province.

Birth defects (BD) are common, costly and critical as they impact the quality of life of the whole family, often in negative ways. Spina Bifida (SB) is one of the BD of the Central Nervous System (CNS) and is the commonest of the Neural Tube Defects (NTDs) [1]. While considerable advancement could be made in preventing SB through folic acid supplementation, many women of childbearing age are unaware of the relationship between folic acid and neural tube defects. However, SB still affects nearly 1 in 2, 000 live births [1] although there remains a paucity of data on BD in most African countries [2]. There is a scarcity of studies on the specific incidence of SB in Zambia. Limited published data show results of a study that was done to evaluate major congenital anomalies at the UTH in 1976 which revealed that the incidence of SB was 0.57 per 1,000 births [3].

It is well established that human pregnancy and fetal development are susceptible to parents’ environmental exposure to chemical, biological and physical agents [4,5]. Air and water pollution, exposure to toxic metals, and exposure to persistent and volatile organics have been linked to adverse pregnancy and developmental outcomes [6,7]. Mining regions specifically have vast areas of disturbed soils contaminated with a variety of environmental metals including arsenic, lead, nickel, uranium, vanadium, copper, and iron, as well as many others depending on the location and type of minerals being mined [8,9]. Reports show that the Sothern Province of Zambia is found in the Zambezi Rift Valley which is hilly with large fault bounded valleys filled with Permian, Triassic and possibly Cretaceous sediments of the Karoo Super group with uranium deposits [10]. Uranium deposits are reported in Mutanga, Mutanga Extension, Dibwe and Dibwe extension. The source of the uranium is believed to be the surrounding Proterozoic gneisses and plutonic basement rocks. Having been weathered from these rocks, the uranium was dissolved, transported in solution and precipitated under reducing conditions in siltstones and sandstones. Post lithification fluctuations in the groundwater table caused dissolution, mobilization and re-deposition of uranium in reducing, often clay-rich zones and along fractures [11]. The habit of eating red/ white soil during pregnancy in most Zambian women is a great source of concern especially those found in the Southern Province of the country.

Given such kind of information on the already established link between some pollutants like Uranium and SB, we set out to establish if there was an ethnic pattern of referrals and origins among the children with SB who were managed at the University Teaching Hospital and Beit Cure Hospital in Zambia between 2001 and 2010.

A descriptive retrospective cross-sectional study design with quantitative methods was utilized. Using a checklist, data was collected from clinical files of children with SB from the University Teaching Hospital (UTH) and Beit Cure Hospital (BCH) from 2001-2010. Both hospitals are found in Lusaka and are the only centers providing specialized care to children with SB in Zambia. The UTH is the largest referral hospital in the country that provides several services to the general public by providing specialized diagnostic and surgical procedures, and also conducts research on commonly occurring diseases in the country.

The study clearance and approval was sought from the Biomeical Research Ethics Committee of the, University of Zambia (UNZABREC). The process of data collection started by orientating the three research assistants who are physiotherapists by profession on how to extract relevant information from the clinical files and eventually entering data on the SPSS data base. Descriptive statistics was used to analyze the data using SPSS version 17. Categorical variables were compared using either the Fishers’ Exact test or Chi-square test. The level of statistical significance was set at p ≤ 0.05 at 95% Confidence Interval. 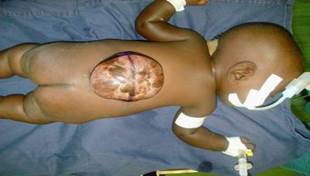 Figure 2. Child with myelomeningocele before surgery. 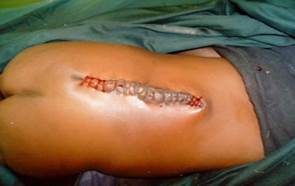 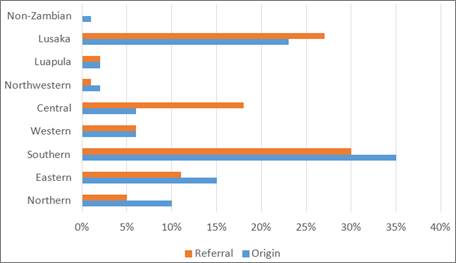 The results of this current study showed there were more boys with SB than girls. It has been observed that gender differences clearly exist in the prevalence of SB. It is essential to note in literature that at birth, SB tends to be more common in girls than in boys at a sex ratio of 1/0.8 obtained for instance from a study that showed that 70% of the neonates were girls while 30% were boys [12,13]. Other studies are also consistent with such findings that females are more likely to have SB than males and this predominance appears to be influenced by the presence of additional birth defects, geographical areas and other factors [14]. Potential explanations given for the predominance among females include differences between the sexes in embryonic developments’ susceptibility to teratogenic insult and spontaneous abortion rates [15,16]. However, amidst such evidence, it is important to note that the results of the current study present contrasting views of male predominance in the management. With such distinct evidence, it is essential to highlight that some sub-Saharan African countries like Nigeria and Cameroon have presented results showing male predominance during the management, [15,17] hence the results are in line with such findings. Probably an explanation can be connected to ethno-theories where boys are much more treasured than girls in most societies in sub-Saharan Africa.

The results showed that the majority of patients were originally from the Southern Province of the country. In the quest to understand some of the likely causes of SB in order to create preventive measures, one of the issues that need to be further investigated is the rock stratum and geological faults in the Southern part of the country. This could probably explain why some uranium mines have been abandoned in the USA [26]. However, these mine wastes represent mixtures of metals including not only uranium, but also arsenic, copper, and other heavy metals, as well as remaining radionuclides. There is evidence that quinoline and trichloroethylene may be significant contributors to the risk of SB [27]. This can be confirmed by the results of a study that was done in China and showed that the age of rock stratum has a positive correlation with the occurrence ratio of NTDs [28]. Furthermore, it has been noted that the older the base rock, the higher concentration of Radon in soil, water and air.

Even though such information has been availed, no systematic investigation has been undertaken to understand how exposures in the numerous rural tribal communities in proximity to these wastes might affect health, especially in children in the USA [26]. But most importantly, some questions still remain unanswered like; could environmental contaminants interact with genetic factors to trigger the development of SB? And if so, how can we further our understanding of relationships between exposure and SB?

There has been some public concern over the Uranium mines in the Southern Province of Zambia. For instance one article in the Post News Paper of the 5th September 2010 highlighted why there is no policy to safeguard the interests of the Zambian people. With the current weak and inadequate ionizing radiation legal and policy framework, the country may continue mining uranium at the detriment of its own people and the safety of the environment. There is a great likelihood that some Canadian Miners may continue to pursue the expansions of such mines when the USA has reported abandoning its’ Uranium Mines because of the harm it has which cannot be disputed. It is therefore amenable that future studies are done in order to assess and analyze the possible causes of human birth defect in this region of Zambia before these mines expand further.

It is highly recommended that an extensive study to be executed in the areas of Matanga and Dibwe in Southern Province of the country to investigate the predominance of SB. It is also recommended that adequate ionizing radiation legal and policy framework put in place.

The research report presented arose from the research project data base that was part of the academic requirements for the Doctor of Philosophy Degree in Physiotherapy at the University of Zambia. We wish to sincerely thank the managements of the University Teaching Hospital and Beit Cure Hospital for their support during the time of the study.