Influence of Job Description on Performance of Health Workers in Public Hospitals: A Case of Mbagathi Hospital, Nairobi City County

Abstract: Sound human resources management (HRM) practices are essential in strengthening the health systems (HS). HRM practices including use of job description (JD) can transform health workers (HWs) into a productive and motivated workforce that improves healthcare services. Kenyan HS miss this nonmonetary motivator of health workers which is correlated with health worker poor job satisfaction and poor performance in service delivery. This study sought to determine how JD influences the performance of health workers (HWs) using descriptive and exploratory research study design. Questionnaires and key informant guides were completed by sampled technical staff and managers working at Mbagathi hospital. Quantitative and qualitative data was analyzed using descriptive statistics and content analysis respectively. Results indicated that the health service managers were not aware of policies on HRM practices. Clear JD, work plans and task description were available to a little extent (54.0%, 53.2% and 52.6% respectively). Established lines of authority were available to a moderate extent (59.3%). The health workers performance was rated at a mean score of 57.6% with a standard deviation of 4.2%. The study concludes that HRM practices were poorly implemented in the hospital. Health service managers needed basic training on JD among other HRM practices including and to establish a department that will implement the practices.

World Health Organization (WHO) defines a health HS as consisting of all organizations, people and actions whose primary intent is to promote, restore or maintain health [1]. A HS is made up of six building blocks namely; service delivery; health workforce; information; medical products, vaccines and technologies; financing; and leadership and governance (stewardship) [2]. Health workforce is all people engaged in actions whose primary intent is to enhance health. HRM is a system, a philosophy, policy and practices that can influence individuals working in an organization. HRM practices include: analysis and designing work, determining human resource (HR) needs, attracting potential employees, choosing employees, teaching them how to perform their jobs and preparing them for the future, rewarding employees, evaluating their performance and creating a positive work environment [3, 4].

Job description (JD) is a broad, general and written statement of a specific job that includes duties, purpose, responsibilities, scope and working conditions of a job along with the job title, and the name and designation of the person to whom the employee reports [5]. JDs that clearly set out objectives, responsibilities, authority and lines of accountability are consistently associated with improved achievement of work goal [6]. Lack of employee understanding of work priories, or change of priorities on regular basis makes it difficult for staff to maintain consistent level of productivity. In many cases JDs are too vague or even nonexistent; with unspecified expectations hence managers hire HWs for a particular job and ask them to perform other duties [7]. The role of Clinical Officers is not clearly understood which has resulted in role conflict [8]. About 17% HWs reported unclearly defined job responsibilities that did not match with their knowledge and skills [9]. HWs de-motivators were reported to be lack of JD among other conditions. 54% of employees stated that they didn't have JDs. Moreover, 44.2% of those who had JDs considered them as being not update and inappropriate [5].

JDs can provide starting point for developing work plans and are typically general however do not identify which specific responsibility or performance objectives are a priority in given period. Most employees only perform duties listed in their JDs that are a priority [7]. Establishment of clear JDs, along with better in-service training and clearer standards can enhance job satisfaction and compliance with standards among nurses and midwives [10]. It is shown that clear JDs alongside supportive supervision and feedback on performance are consistently associated with improved competence of individual HWs enhanced attainment of work goals [6, 11].

This was a cross sectional descriptive and exploratory research conducted in Mbagathi Hospital located in Nairobi west, Dagoretti District of Nairobi County. The sample size of 177 respondents was determined using Yamane (1967: 886) at 95% confidence level. Managers and technical staff were purposively and stratified sampled respectively. Data collection was by use of key informant interviews and structured questionnaires. Quality control measures were employed including pre-test, validity and reliability checks.

Permission to conduct research was sought from the university, Nairobi County and relevant authorities at Mbagathi hospital. Respondents consented to participate with confirmation of confidentiality. Collected data was cross-checked for completeness and any missing entries corrected upon completion of each interview. The quantitative data collected was coded, processed and cleaned present inconsistencies and outliers and analyzed using Statistical Package for the Social Sciences (SPSS) version 21.

The qualitative data was analyzed through creating categories, refining them and grouping them into themes and sub-themes before interpretation, presentation and discussion. Relationship between the independent variables and the dependent variable was established using Chi-square tests of association. Findings were presented in the form of text, charts, graphs and tables.

General HWs’ performance was determined on scores of competence, productivity, availability and responsiveness dimensions evaluated on a 3-level scale coded as disagree (1), undecided (2) and agree (3); summed up and expressed as a percentage of total possible score. The mean performance was 57.6% with a standard deviation of 4.2%, see Figure 1 (Health worker's performance distribution). The average HWs’ competence score was 65.9% as indicated in Table 1 (Health workers' competence). 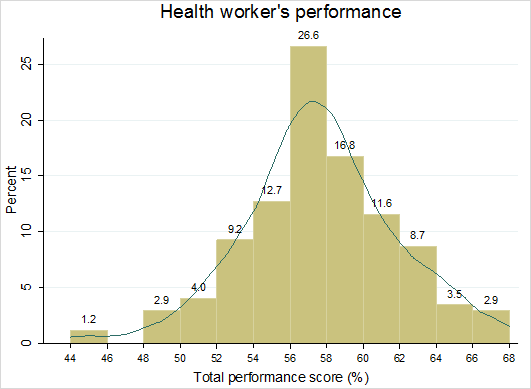 There were no trainings on HRM practices including support supervision. The health service managers were not aware of any existing policies on HRM. HRM practices were conducted through health administrative offices. This depicts a non-involvement of HWs on HRM practices which could be detrimental to their motivation thereby significantly hampering their productivity.

The mean performance of HWs was 57.6% with a standard deviation of 4.2%. The average HWs’ competence score was 65.9% similar to findings in a study conducted in Uganda [15]. Contrary findings indicated that high percentage of HWs were unable to work to the expected standard because of lack of training and performance management [16]. Another study in Kenya concluded that health provider competency at performing basic, life-saving skills was quite low and that their tendency to refer patients with complications were all too common [17].

The HWs’ productivity score had an average of 54.6%. This was similar to findings in Zanzibar where on average HWs spent three-fifths (61%) of their observed on-the-job time doing productive activities, primarily providing direct care for patients and also spent more than one fourth (27%) of the observed time doing unproductive activities, mostly waiting for patients [18]. This can be explained by assertion that Kenya has embarked on improved institutional and health worker productivity; and a performance structure that is appropriate in delivering health care and ensures an equitable distribution of HWs in facilities [14].

HWs’ availability had an average score of 53.5%. Similarly, despite the fact that policies are in place to ensure the availability of HWs, less than half of HWs were present in their place of work and active at the time of survey [9,19,20]. Contrary, most respondents interviewed reported that the health providers were available in their place of work and that they were productive [16].

HWs’ responsiveness had an average score of 56.6%. The responsiveness score was below 73% of a study done in Ethiopia where respondents felt that provider’s empathy was good and 83% rated non-verbal communication as good [17]. Responsiveness defines how well the HS meets the legitimate expectations of the population [16]. In Ethiopia there was a relatively high level of satisfaction (80%) of patients with health services they received mainly waiting time and courtesy of staff [17].

4.2. Job Description Practiced on the Performance of Health Workers

There was no significant association between use of JD dimensions and performance dimensions. On the contrary, HWs need clear JDs that outline what is expected of them, what is allowed and what skills they require to do their jobs [21]. These may be national documents that can be adapted in the workplace. A key benefit of JDs is that they enhance employee productivity. In some cases, lack of a JD causes employees to emphasize the wrong aspects of their jobs. A written JD should not only include the tasks an employee is expected to perform but also a ranking of importance of each duty. JDs prevent employees from misunderstanding which work is theirs, reducing instances of work not being done because someone thought the duty was not in her JD or work being duplicated because two employees assumed they were responsible for a task [22]. Employees who know not only what they’re supposed to do but also what their peers’ responsibilities are become stronger team members. Although many health care workers had JDs, the performance indicators and standards were not clearly defined and known to all workers and managers [23].

Existing JDs were not clear and never reviewed. Similarly, HWs are often not provided with the JD or outdated JDs with poorly defined responsibilities [9]. Contrary views were made in the DHMT survey in which it was observed 61 percent of districts used JD for staff appraisal [24]. In a survey of 856 nurses and midwives in five provinces in Indonesia found that 47.4% nurses and midwives did not have written JDs, 39.8% were engaged in work other than nursing care or midwifery and 70.9% had not received in-service training for the past three years [25].

Established lines of authority were used to a moderate extent though they were not very clear. Typically in an hospital there are dual lines of authority since in an established group practice the medical staff seldom exist as a formal entity but instead the physicians own the enterprise since they are basically focused on providing patient care thus their fundamental loyalty is to their patients and their accountability is to their professional colleagues meaning they are not concerned primarily with the success of the organization, nor do they acknowledge its legitimate power and authority [26]. Contrary, 69.6% hospitals had Nurse Executive line authority for nurse staffing [27].

Work plans were lowly used and in some cases not available. On the contrary, 52% of districts in the DHMT survey used work plans [24]. In Sudan, records of the ministry of health and other health care organizations show no documentation for planning documents in the domain of the health workforce [28].

Task description was used to a little extent similar to a case where even though Clinical Officers are important service providers their role is not clearly understood, which has resulted in role conflict [8]. Further, from a total of 747 respondents, 17 per cent stated that their job responsibilities were not clearly defined, or that their job responsibilities did not match with their knowledge and skills [9].

The HWs at the hospital were not able to clearly know what is expected of them, what is allowed and what skills they require to do their jobs. This increased cases of misunderstanding on which work is theirs and reduced instances of work being done. The HWs performance was averagely rated, in conjunction with unclear JDs.

Limitations of the Study

The researcher relied on self-report performance indicators hence bias was a possibility since individuals are likely to exaggerate their performance.

The authors of this publication "Influence of Job Description on performance of Health Workers in public hospitals: A case of Mbagathi Hospital, Nairobi City County" would like to thank Kenya Methodist University for supervision and Exactitude Research Consultants (Ltd) for data management services.