Abstract: While malaria is mostly an endemic disease in Ethiopia. It may also occur as outbreaks in areas with low seasonal transmission because of an increase in vector breeding sites, migration of infected people into a vector-rich area populated with susceptible individuals, breakdown of vector control measures and resistance of the vectors to insecticides. The aim of this study was to verify, investigate the outbreak epidemiologically and guide intervention measures. We reviewed data from health post records from 2007 to 2011 and screened randomly 50 fevers cases from the community members by Rapid Diagnostic Test/RDT/ to determine the baseline incidence of malaria in Ankesha District. We defined a confirmed malaria cases as any person with fever or fever with headache with plasmodium parasites by confirmed microscopy and RDT. We conduct descriptive epidemiological study and Entomological survey. A total of 2,061 confirmed malaria cases and one death (CFR=0.05%) were identified. Among the species distributions, plasmodium falciparum was accounted 1484 (72%). The alert threshold (Quartile for 5th year’s data/doubling the last year data) had been reached and crossed in 24th March, 2012 in all health facilities. It showed highest peak between the epidemiological weeks of 17-27 in 2012. The median age was 17 years with a range 0.2 to 83 years. The highest age specific attack rate was in 5-14yr, 17.9 per1000 (642) population. Among sex distribution male comprise 53.3%. The attack rate was high in Azena Kebele which was 165per 1000(883) population in under-fives and 132 per 1000(745) population in>5 years old. Environmental assessment revealed the presence of multiple breeding sits, which was favorable for larvae of Anopheles mosquito. Arbitrarily 53 visited households were observed the LLIN bed net utilization, only 17 (32.1%) households were hanging in their ceiling directly to the bedding. And also IRS was not sprayed for last one years in all affected kebeles. The outbreak was caused by the breakage of Ayehu river formed high larva density, improper usage of LLIN’s bed net and impediment / low coverage of IRS operation. Factors such as delayed detection and notification and inadequate surveillance were also instrumental for the outbreak. We recommended creates awareness giving health education, strengthen the surveillance system and implement a community based program on the LLINs utilization, IRS and environmental management.

Malaria is a life threatening parasitic disease transmitted by female anopheles mosquitoes. It is caused by the protozoan parasite plasmodium and transmitted by anopheles [1]. The five plasmodium species that are known to infect humans but them each differ in many aspects of their biology and geographic distribution[2].

Approximately 52 million people (68%) live in malaria risk areas in Ethiopia; primarily at altitudes below 2,000 meters [6]. Malaria is mainly seasonal with unstable transmission in the highland fringe areas and of relatively longer transmission duration in lowland areas, river basins and valleys [7].

In Ethiopia, a devastating malaria epidemic occurred between in 1958, involving about three million cases and 150,000 deaths, and covering about 100,000 square miles (259,000 square kilometers) of highland area [8]. Since 1958, major epidemics of malaria have occurred at approximately 5-8 year intervals, though recently there has been a trend towards smaller-scale, more frequent, sporadic epidemics, and seasonal case build-ups. In 1998, a widespread severe malaria epidemic occurred in most highland as well as lowland areas in the country [8,9].

Amhara region is one of the low land malarious Regions of Ethiopia. The prevalence of malaria in 2011/2012 was 4.3% and the prevalence rate among sex was male (4.8%) greater than female (3.4%). The dominant species of malaria in the region are both P. falciparum and P. vivax [10].

Malaria is a major public health problem in Amhara region. Ankesha district is one malaria endemic districts of the region. There could be epidemics in high transmission areas if there is deterioration of health system, interruption of anti-malarial measures or migration of non-immune individuals, such as population movement in search of labor to these areas [8].

Outbreak investigation was conducted in Azena kebele, Shumata kebele and Ayehu kebele of Ankesha district of Awi zone. The region deployed a team of investigators to undertake possible investigations and intervention measures. The objective of this study to a) to gather evidence to indicate what might be the underlying causes of this epidemic; b) to better understand the events at that district; c) to verify the epidemic; d) to identify gaps and provide technical support e) to make recommendations about how to better control the epidemic; f) and to help determine whether these local malaria events have implications to other parts of the region. 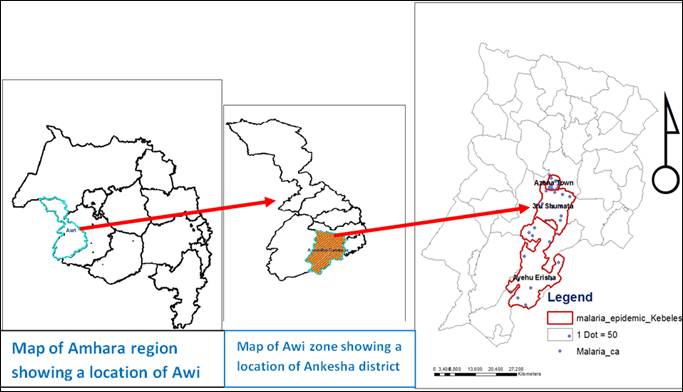 A case of malaria was defined any person with fever or fever with headache with plasmodium parasites by confirmed microscopy or RDT in resident of Ankesha district from March 24 –May 17/2012. We reviewed data from health post records from 2007 to 2011 to determine the baseline incidence of malaria in Ankesha District. Data were collected using filed observation and a structure questionnaire. A structure questionnaire was used to collect demographic and risk factors information. All the quantitative data collected was checked and entered on a computer and analyzed Epi. Info version 3.5.1. Data cleaned and checked for inconsistencies and missing values.

In all studied kebeles, an outbreak was verified by comparing the current year data with a third quartile method (2nd largest number) during the previous 5 years. It was shown that the current case trend line crossed the threshold levels in all kebeles (figure 2). The screened 50 febrile cases, RDT result comes out with 72% positivity rate. As the national guideline the outbreak threshold is >50% positive, this result confirmed an outbreak.

3.2.2. Distribution of Cases by Date of Fever Onset

Weekly malaria reports increased from an average of 70 cases per week to more than 160 per week and a continued elevated malaria case load is being observed between the end of March and May 2012. The weeks when epidemic started was on March 24, 2012. However, the district health department was notified on May 6, 2012. The epi-curve showed the outbreak is a propagated one with multiple peaks with a possibility of person to person transmission (Figure 3). The peak numbers of malaria patients were on 7th-17th May, 2012. The proportion of Plasmodium falciparum infections was higher than plasmodium vivax.

Figure 3. Confirmed malaria cases by date of onset in Ankesha district, Amhara, Ethiopia, from 24 March – 17 May 2012.

Entomological survey was conducted in Ayehu kebele of Ayehu river dam where the first rumor and majority of cases were coming. There was multiple site of breakage water bodies for increase in vector breeding of anopheles larvae. The river was vast and difficult to drain and fill within a short period of time (Figure. 4).

Figure 4. Investigation of larva and pupa stag of Anopheles at Ayehu River.

Fifty-three households (HH) from each affected kebeles were arbitrarily selected and visited to search new malaria cases and observe the status of LLINs utilization. All households had at least one LLINs in their house but only 32.1% (17) of the HHs hanged the LLIN’s in their ceiling directly to the bedding while the rest were puts underneath of the beds and other places in the house. However, 13% of visited household nets were damaged by rodent. In this study, about 21% do not use their nets at all while of those who reportedly use their nets, about 56% use their nets irregularly. And also clients were responds on indoor residual sprayed was performed for the last one year in all outbreak affected kebeles.

• Eradicated or reduced the malaria breeding sits through community participation

• Conducted focal spray on the affected kebeles and neighboring "gotes’’

These findings provided confirmation of the existence of malaria epidemic based upon credible five years or last one year of epidemiological records including laboratory diagnosed malaria data. Malaria epidemic existed at the end week of March, 2012 when it started to cross epidemic threshold. Since Ethiopia has a recent history of severe malaria epidemics, continued vigilance, and prompt investigations of smaller focal epidemics with rapid effective responses are needed to control and contain them.

Malaria epidemic started date in the district was related to the national data, actually the epidemic occurred at different times depending on the region, but overall it is believed to have started in April, and lasted until the end of December, many areas of Ethiopia began reporting an abnormal number of malaria cases [11].

Ayehu river dam was the major precipitating factor for breeding anopheles mosquitoes. This might be due to a change climate pattern; deficit rainfall for breakage of water bodies for an increase vector breeding population. Thus, most of the affected population were lived around and near the irrigation sites. Moreover this the vector control measures such as LLINs utilization, IRS performance and environmental control management was not properly done.

Health posts which was found in the affected kebeles, the weekly monitoring chart was not used properly and updated for detect increased malaria cases at an early stage that would indicate emerging epidemics. Also there were gaps on data recording and reporting to monitor the diseases trend in morbidity and mortality, data analysis and interpretation not done weekly base and not have epidemic management committee those might be the aggravating factor of the outbreak and not detect early to respond the outbreak.

Started in May 7-18 / 2012, there was high no of Malaria case reported. This is due to active case searching house to house in the community was done.

Most of cases affected male than female under sex distribution might be male enrolled the irrigation program of Ayehu River.

Factors may have contributed to the high case positive rate of this outbreak might be the high sensitivity of the Malaria rapid diagnostic test (RDT). Since clients who get cured from malaria have also the chance to be positive for malaria if tested by the RDT within14 days of treatment, this may increase the positivity rate falsely when clients visit health posts within 14 days of treatment.

The observed house hold level of LLIN’s bed net were placed wrongly and poor utilized in the majority of HHs but in the Study of in Prion, Mali, utilization of LLIN significantly reduces the burden of malaria. [12]. Also in the district there was a weak performance on early warning surveillance, environmental management and delayed IRS spray may resulted in seasonal peaks increasing to levels that surpass the epidemic threshold.

An epidemic starts when the number of cases in a given week is higher than the threshold number (either the third quartile or double the number in previous year). Being high Larva density, dam of river, deficient rainfall and improper usage of LLIN bed net, impediment IRS operation had contributed to the outbreak. All kebeles of the district have Suitable areas for malaria spelling site due to adjacent to the breakage river of presences of high Larva density. Vector control interventions were not carried timely in the district. There is no district-based epidemic early warning, prevention and response team.

• Keep weekly malaria data and used it for early detection of malaria epidemics and take action.

• Improving the completeness/quality of data collection, analysis and interpretation

• Use and updated malaria monitoring chart

• Functional and permanent epidemic management committee should be established

• LLINs should be used regularly and replaced timely

• District health department must be allocate budget for timely spray of IRS based of the transmission seasons before cases increasing / peak transmission so as to prevent epidemic before malaria flare up.

• Irrigation sites should be monitored for prevent malaria outbreak

We would gratefully acknowledge those health professionals who participated in study. Lastly our sincere appreciation goes to all staff working in Ankesha district and Awi zone for their kind support during the study period.