Abstract: Breast cancer is a leading cause of cancer deaths among women in many parts of the world and screening practices play a vital role in its prevention and early detection. This study sought to assess the level of awareness, determine the attitude and document breast cancer screening practices among respondents. A cross-sectional descriptive survey of 150 respondents was conducted at the Department of Radiology of a tertiary health facility in Ado-Ekiti, Nigeria. The study population consisted of female patients referred for breast imaging. A structured questionnaire was used for data collection. The data was analysed using SPSS version 16, Chicago USA Inc. Respondents presented for breast imaging due to breast related complaints (75.2%) as opposed to routine medical screening for breast cancer (24.8%). A total of 43 (28.7%) respondents had breast ultrasound scan done previously, 105 (70%) had practiced breast self examination (BSE) before, while 54 (36%) had clinical breast examination (CBE) done previously. Among those aged 40 years and above (n=67, 44.7%) only 18 (26.9%) had a previous mammographic screening. Overall attitude to BSE was good (56%) but attitude to CBE was negative (69.3%). Respondents’ occupation was found to have a significant association with attitude towards BSE (p=0.001). The logistic regression analysis of predictors of awareness of mammography showed that women aged 40 years and above are more likely to be aware of mammography as a screening tool for breast cancer (OR=3.05,P= 0.012; 95%CI 1.28-7.27). There is a need for increased awareness and adoption of breast cancer screening practices in our environment in order to engender a reduction in breast cancer morbidity and mortality.

Breast cancer is the most common cancer among women both in developed and developing countries, comprising 23% of all female cancers. [1] Globally, one million new breast cancer cases are diagnosed each year [2]. Breast cancer screening methods have been found to help with early detection of breast lesions and the methods include breast self-examination (BSE), clinical breast examination (CBE) and radiological imaging of the breast using low dose x-ray in mammography [3]. Breast cancer screening can also involve Ultrasonography and Magnetic Resonance Imaging (MRI). Breast cancer has continually caused significant morbidity and mortality among women in middle and low income countries owing to a delay in seeking health care for breast related complaints. In developing countries, late presentation by breast cancer patients has frequently been reported. [4] Delay in seeking treatment is further compounded by ignorance and misconceptions about the disease. When women present to health facilities late and at advanced stages of the disease, little or no benefit is derived from any form of therapy. [5,6] In contrast, breast cancer patients from developed nations present earlier, and a significant proportion are detected by screening mammography. The aim of the study is to assess the level of awareness, determine the attitude and document breast cancer screening practices among females presenting for breast imaging services at our health care facility.

This is a hospital based cross sectional descriptive study conducted at the Radiology department of Ekiti State University Teaching Hospital (EKSUTH), Ado-Ekiti; a city in southwest Nigeria. Ethical approval for the study was obtained from the institution’s ethics and research committee. The instrument for data collection was a semi-structured questionnaire which contained relevant questions on attitude and practice of the study participants towards breast cancer screening practices. All consenting clients aged 18 years and above, presenting for breast imaging were recruited culminating in the selection of 150 female clients over the study period of one year. Clients who were referred to the department for other radiological investigations were excluded from the study. The raw data was entered into a computer spread sheet and analysed using SPSS version 16, Chicago USA Inc. Descriptive, bivariate and multivariate analyses were carried out as appropriate. Socio-demographic and other relevant variables (age, occupation, education, marital status etc) were presented in frequencies and proportions. Inferential statistics, chi-square test was used to test for associations between categorical variables. Multivariate analyses (binary logistic regression) were employed to identify independent and significant factors and to correct for confounding variables that may influence awareness of mammography.

All the respondents were females, age range 18-70 years with a mean age of 37.39 ± 13.2 years. A higher proportion of respondents (78.7%) had at tertiary level of education. Majority of respondents (62.7%) were married. With respect to respondent’s religion, they were predominantly Christians (96.0%) (Table 1) The most common clinical indication for breast imaging was breast pain (41.6%), followed by routine medical screening for breast cancer (24.8%). (Figure 1) 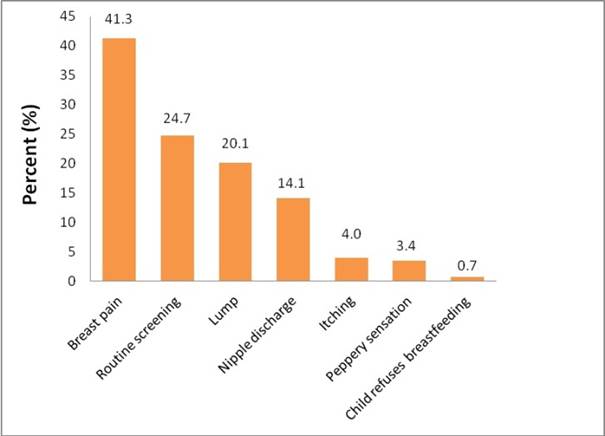 Out of 105 respondents that had done BSE in the past, 44 (41.9%) which is a higher proportion believe that it should be done once a week. Regarding the ideal time in a month when BSE is best done, 29.0% of respondents do not know while another 29.0% think it can be done anytime. Among the respondents who did not practise BSE, majority (51.1%) gave reasons of not knowing how to do it. (Table 2) The overall attitude to BSE was positive (56.0%).

Table 3. Relationship between socio-demographic characteristics and Attitude to Breast Self-Examination.

The logistic regression analysis of predictors of awareness of mammography (Table 5) shows that, women older than 40 years are more likely to be aware of mammography as a screening tool for breast cancer (OR=3.05, P= 0.012; 95%CI 1.28-7.27).

Table 5. Multivariate analysis of predictors of awareness about mammography.

Breast cancer remains the commonest malignancy affecting women as reported from population based cancer registries in Nigeria. [7] The need for breast cancer awareness and regular screening in order to facilitate early detection and treatment is key to reducing the morbidity and mortality attributed to breast cancer. [8] Adoption of breast cancer screening methods is generally poor in the developing countries and this is not unconnected with inadequate knowledge about breast cancer. [9,10] Majority of the respondents (75.2%) in our study came for breast imaging as a result of a breast related complaint while only 24.8% presented for routine breast cancer screening. This reinforces the fact that the women in our environment are yet to embrace breast screening practices but only see a need to visit the hospital whenever there are complaints. About 70% of the respondents in this study claim to practice BSE. A study conducted by Akinola et al in Nigeria showed that 67.6% of the respondents practiced BSE [11] but in contrast to findings by Adegbenro et al and Okobia et al which revealed in separate studies that about 30% of women ever practiced BSE [5,12]. A survey of women in Iran also revealed that BSE was practiced by only 17% of the respondents. [13] BSE is an inexpensive and simple method which women can be taught in order to ensure that it is done the appropriate way and at the appropriate time. While it may help to create an awareness about breast cancer, there is no clear evidence that performing routine BSE aids in the early detection of breast cancer or that it reduces breast cancer-related mortality. [13]

Recent estimates suggest that CBE has a sensitivity of about 54% and a specificity of about 94%. However, it has been shown that clinical breast examination may only detect about 60% of breast cancers that are detected by mammography. [13] This study showed that 36% of the respondents had ever had a CBE done and overall attitude to CBE was negative (69.3%). A feeling that they had no problems with their breast coupled with lack of awareness about CBE constituted major reasons why the respondents were not undergoing CBE. This underscores the need for client health education in health facilities in order to engender voluntary participation in CBE in our environment.

Mammography is the gold standard for breast cancer screening. [14] Women aged 40 and above are eligible for routine mammographic screening, however dense breasts reduces the sensitivity of the study. Evidence supporting the usefulness of mammographic screening is strongest for women between 50 and 69 years of age. [15] In women with dense breasts additional imaging using ultrasonography is often done. Ultrasonography is also utilized for breast imaging in the female clients less than 40 years of age. MRI is not readily available in resource poor settings and this limits its use for breast imaging in the developing world. Notwithstanding, the contribution of breast self-examination, clinical breast examination, ultrasonography and even mammography to reduce the number of deaths from cancer is currently a source of controversy. [16] However in developing countries were late presentations is rampant, promoting the practice of breast self-examination, clinical breast examination and regular mammography screening remains advantageous. Mammography is gradually becoming more available in health care facilities across Nigeria. The findings from this study showed that awareness of mammography among women was low, as only 41.3% of the respondents had ever heard of mammography. This is in line with findings from other studies. [11,17] The multivariate analysis showed that women aged 40 years and above were more likely to be aware of mammography in this study. This may be linked to the fact that this group of women are also the ones eligible for routine mammographic screening.

Socio-demographic characteristics such as the level of education, [5,18] has been identified as influencing the level of knowledge and utilization of screening services in general with higher levels of awareness and utilization of screening services displayed among the educated and those with high socioeconomic class. Respondents’ occupation was found to have a significant association with attitude towards BSE (p=0.001). Also the respondents with a tertiary level of education constituted a majority of those had positive attitude to BSE. This study revealed that the level of education of a woman is a key factor influencing adoption of breast cancer screening practices. Women who had a higher level of education, were more likely to practice BSE and easily utilize other screening methods if the need arises. This is contrary to a study by Sensiba et al that educated women often forget to practise BSE. [19]

Information on BSE was mostly obtained from doctors, nurses and other health workers in this research. Healthcare providers not only play an important role in treating patients but are also responsible for improving patient behaviours and screening, as yearly mammography and clinical breast exam is the single most important step that clinicians can take to reduce suffering and death from breast cancer [7]. A greater proportion of respondent got information on mammography from the print and electronic media. This shows the impact of the media on information dissemination. Strategies such as ‘Enter-Educate’ can be incorporated in form jingles, songs, playlets and write ups to arouse the interest of listeners, viewers, and readers while passing the educative information on breast cancer screening methods. [20]