Abstract: Traditional medicine is an ancient medical practice that is still widely used in prevention and treatment of various health problems for majority of global population particularly in rural developing countries like Ethiopia. The aim of this study is to assess knowledge, attitude and practice of the community on tradition medicine in Jara town. A community based cross sectional study was carried out in the community of Jara town from April 5 to April 10/2013. Face to face interview was carried out using structured questionnaire. Data were analyzed using SPSS version 20. Frequency and percentages were calculated. The study involved 271 participants recruited by systematic random sampling technique. Participants of the study were interviewed with a structured open and close ended questionnaire. From the total of 271 participants who were identified for the study all of them participated in the study. Two hundred sixty one (96.3%) of the respondents answered that they have heard about traditional medicine. One hundred forty eight (54.61%) of the respondents think that there are diseases that are not cured by modern medicine while 123(45.38%) believe that there are no diseases that cannot be cured by modern medicine. One hundred nineteen (43.91%) of our respondents have planned to use traditional medicine in the future. Two hundred (73.8%) of the respondents have used traditional medicine at least once in their life time. The study concludes that many of the respondents found herbal medicine to be safe, effective and beneficial. Despite many of the respondents believe that herbal medicine rarely produce adverse effect, a few experienced them mildly and moderately.

World Health Organization (WHO) defines traditional medicine (TM) as health practices, approaches, knowledge and believes incorporating plant, animal and mineral based medicine, spiritual, manual techniques and exercises, applied singularly or in combination to treat, diagnose and prevent illness and maintain well being [1]. Traditional medicine is still widely accepted and used in prevention and treatments of physical and mental disorder as well as social imbalance, due to its intrinsic qualities, unique and holistic approaches as well as its accessibility. It continues to be the best alternative care available for the majority of the global population, particularly for those in the rural areas of the developing countries [2].

The WHO estimate that in many developed countries, 70-80% of the population has used some form of alternative or complementary medicine including, homeopathic, naturopathic, traditional oriental and Native American Indian medicine [3]. Traditional medicine has maintained its popularity in all regions of the developing world and its use is rapidly spreading in the industrialized countries. In China for example, traditional herbal preparation account for 30 to 50% of the total medicine consumption. In Ghana, Mali, Nigeria and Zambia, traditional medicine is the first line of treatment for 60% children. WHO estimates that in several African countries traditional birth attendants (TBAs) assist in the majority of birth [4, 5].

Traditional medicine like herbal medicine, massage, therapeutic dieting, fasting, hydrotherapy and radiant healing therapy are practiced in many parts of Africa. However; given the great diversity of cultures, ethnicities and geographic region with in Africa, it is extremely difficult to make generalization about African traditional medicine. Notwithstanding the challenges and competitions, traditional medicine faced vis-a-vis Western medicine, many Africans, especially those in the rural areas rely on traditional medicine not only for their medicine value and promotion of good health and fortune but also their spiritual well being [8].

The vast majority of Ethiopia population lives in rural areas where the health care coverage low and where existing public sector resources are being stretched to the limits. One of the greatest challenges facing the country is determining how best to narrow the gap between the existing services and the population whose access to them is very limited [9]. A study of pharmaceutical drug use showed that 35% of the population did not obtain prescribed drugs due to money [10]. However; most traditional medicine are delivered either free or with a relatively low cost which contributes to the use of rural based healers for community primary health care need, The current Ethiopian health care system is primary health care focused [11, 12].

p= people getting health care from traditional medicine that is 80%.

There are 1720 households in Jara town and sample size is to be 271. So households were selected by systematic random sampling technique by which every sixth household undergone a face to face interview.

Face to face interviews were carried out using the questionnaire which was first formulated in English version and then translated in to Afan Oromo. Each questionnaire was checked for incompleteness, missed values and unlikely responses, and then manually cleaned upon such indications. The data was cross checked for consistency and accuracy.

Before data collection procedure, letter of permission was obtained from MWU Research and Community Service Directorate and verbal consent was taken from the study subjects. The respondent right and dignity was also respected in order to keep confidentiality of each respondents’ name was not included. 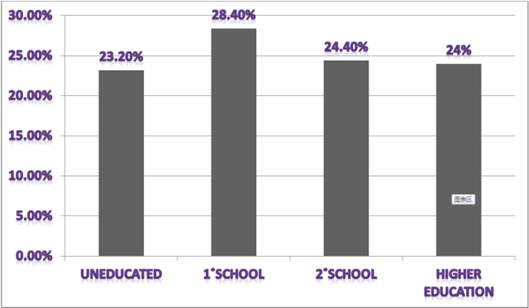 Figure 1. Educational status of the respondents in Jara town, April 2013.

3.2. Knowledge of the Study Subjects on Traditional Medicine

3.3. Attitude of Participants of the Study Towards Traditional Medicine

3.4. Practice of the Study Subjects on Traditional Medicine

Among the respondents who have used the different forms of traditional medicine: 160(80%) of the respondents mentioned that the outcome was improved. While 9(4.5%) of them complained that the outcome was exacerbated and 31(15.5%) had no change. One hundred seventy three (63.84%) of participants prefer modern medicine, 21(7.75%) of them prefer traditional medicine while 77(28.41%) want to use both traditional and modern medicines equally.

From the total of household owners participated in the study who used traditional medicine because of its availability and affordability is 94(34.68%) and 33(12.18%) respectively; while others 144(53.14%) mentioned that to use modern medicine because of their awareness about it. Accordingly, 177(65.31%) interviewees have visited traditional medicine practitioners at least once in their life time and 94(34.69%) of them have not.

This study has attempted to assess the knowledge, attitude and practice of the community about traditional medicine. Accordingly the results of the study showed that the proportion of male in the sample was higher when compared to the female. This is somewhat expected due to the head of family is the husband and at the time of interview house wives give chance for husband.

Our study reveals that respondents who accept traditional medicine/ practice (50.18%) and who didn’t accept traditional health care practice (49.8%) are almost equal, but on the study which was done in Arsi zone Shirka district showed that 71.4% of participant accepted traditional health care practice. When we compare our result with that of Shirka district, number of participants who accept and who did not are equal [13]. However, the study conducted in Bale Zone Odo-Bulu and Demaro districts are consistent with our result. That may be due to better modern health care service availability and awareness of the community about modern health care service. Reason for acceptance of traditional medicine practices by the respondents were due to its affordability and accessibility, religious perspectives and they believe that there are diseases that are not cured by modern medicine. But those who did not accept traditional medicine practices were due to fear of side effect, awareness about modern medicine and modern health care availability.

Furthermore, according to this study majority of the respondent 55.7% reported that they come to the modern health care institutions soon after visited modern health care service soon after visiting traditional medicine practitioners. This figure is almost consistent with a study conducted in Shirka district. The reasons behind this is as mentioned by the respondents were not show improvement (69.9%) is the first followed by the side effect of the drugs (17.18%) [13].

The majority (73.8%) of our respondents have used traditional medicine once at least in their life time. The highest proportion (44.8%) of the respondents used drinkable form of herbal medicines followed by ointment type (31.85%). This result is similar with the study that was conducted in Bale zone, Mana Angetu district. Most of the users mentioned that the outcome was improved (80%), no change (15.5%) and exacerbated (4.5%). This result has an agreement with the study done in Shirka district, Arsi zone [13].