Abstract: Reducing maternal morbidity and mortality is a global priority which is particularly relevant to developing countries like Ethiopia. One of the key strategies for reducing maternal morbidity and mortality is increasing institutional delivery service utilization of mothers under the care of skilled birth attendants. Thus, this study was aimed at assessing factors affecting delivery service utilization among women who give birth during the period of two years in Arba Minch town. Community based cross sectional study was used and the required sample was 178. Study participants were selected using systemic sampling method from list of women who had given birth in the last two years in Arba Minch town. Detailed explanation and interpretation was made by presenting the data in the form of frequency, percentage using tables, graphs and odd ratio with 95% CI was calculated to see the association b/n the dependent & independent variable .A total of 168 women who gave delivery in the last two year prior to this study survey, were interviewed making a response rate of 94% and the prevalence of delivery service utilization was found to be 73.2%.NoneEducated women were 27% less likely utilize the delivery service then educated [OR, 0.733 95% CI=0.468-1.149]. Women who know the benefit of giving birth at HF were 44% more likely to utilize delivery service than [OR, 2.444 95% CI=1.728-3.458].the women who have Knowledge of complication of labour were 44% more likely to utilize delivery service than the women who have Knowledge of complication of labour [OR 1.444, 95% CI=1.728-3.458]. In this study age, monthly income, distance of the HF and knowledge on complication were associated with delivery service utilization. The concerned government office needsto work on creation of awareness.

Despite progress in some countries, the global number of deaths per year, estimated at 529,000 or one women’s death every minute has not changed significantly since the ICPD, according to recent estimate by WHO, UNICEF and UNFPA; ninety-nine percent of these deaths occur in developing countries. Millions more women survive but disability related to pregnancy and child birth. Yet, most of these deaths could be avoided if preventive measures were taken and adequate care was made [2-4].While it is recognized that almost half of the newborn deaths can be prevented by scaling up evidence-based available interventions such as tetanus toxoid immunization to mothers; clean and skilled care at delivery; newborn resuscitation; exclusive breastfeeding; clean umbilical cord care; management of infections in newborns, many require facility based and outreach services [21].

This study was conducted in Arbaminch town. Arbaminch town is one of the 22 reform town in Ethiopia which is found in SNNPR, Gamo Gofa zone. The town is located 505km from the capital city Addis Abeba. Arba Minch town has four sub-cities and there were around 351 womenwho have given birth in the last two years and the study was conducted from August 16, 2013 toAugust 30, 2013.

The sample size was calculated using Single population proportion formula based on the following assumption:

Arbaminch town has four Sub-cities and eleven kebele. The study was done in all kebeleandthe calculated sample size (178) was used to recruit study subjects from all kebeles proportional to the their size. The minimum number of participants included in the study from each kebele was assigned proportionately based on data obtained from the respective statistics office. Then, systematic random sampling was used to select and approach study subjects who gave birth in the last two years during data collection time.

Data collection format was developed after review of different related literature: the format include the following check list

Training and orientation on how to collect the data was given for the data collectorspre-test was conducted and possible modification was done based on the finding and after on the actual data collection was carried out. The data was collectedusing Semi Structured interview administered questionnaire.

Coded by number and entered in to a commuter software EPI info version 3.5.1 statistical package and exported to SPSS version 20.Cross checking and data cleaning was done for accuracy and consistency by running frequency of each variable by principal investigator. Detailed explanation and interpretation was made by presenting the data in the form of frequency, percentage using tables, graphs and odd ratio with 95% CI was calculated to see the association b/n the dependent & independent variable.

•  Uneducated - a woman who is unable to read and write

•  Educated – a woman who is able to read and write

•  Recent delivered women - women who had a deliver within the last two years during the period of data collection.

Ethical clearance was obtained from ethical review committee of Arba Minch University, College of medicine and Health Science, department of nursing. An official letter from the college was sent to all kebeles of Arba Minch town in order to get permission for data collection. Verbal consent was obtained from each respondent before data collection. Subjects were told the confidentiality of the information that they are going to give. Ethical way of approaching was followed by the interviewers in a manner of respect of the culture, religion, language and other dignity of the community, their right to refuse.

In this community based correctional study A total of 168 women, who gave delivery in the last two year prior to this study were interviewed making a response rate of 94% and the prevalence of delivery service utilization 73.2%. 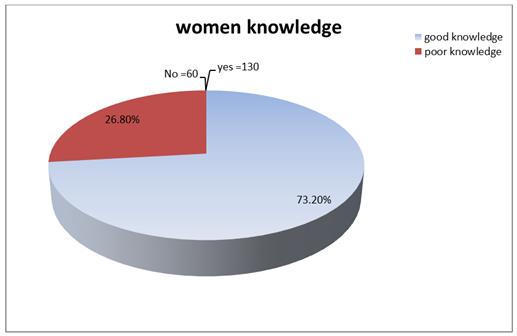 Households having monthly income200birrwere 73 % more less likely utilize delivery service than those with monthly income200-400birr [OR 0.733 , 95%CI=0.468-1.149 ]. With regard to the health service factor distance ever used utilized the service. On the contrary, health facility at proximity, and ability to pay for the service were significantly associated with place of delivery [OR4.100, 95%CI=2.751-6.111]

Women who have been living in areas more than ten min far away distance from health facility were less likely to utilize health service with [OR 1.156, 95%CI=0.775-1.722 ]. Considering the maternal knowledge

This community –based study has tried to identify factors affecting delivery service utilization in Arba. Minch town .in this study, 73.2% of the mothers gave birth in the health facilities and it show the majority of the mother was delivered in health facility (26.8%) preferred home delivery. This finding is almost consistent with the FMOH report (health and health related indictor) which is (23.7%), SNNRP (16.7%) and Sheka Zone (25.1%). All of these studies showed that still high number of women was delivering at home being attended by untrained birth attendant and relatives.

From the total, 45 (26.7%) of them were home deliveries. All of the home deliveries were attended by relatives and untrained TBA. This finding is consistent with Amhara Region EDHS 2011, 64.6 percent were attended by relatives but slightly lower than the finding in North Gondor (76.4%) and (72.6%) in Metekel Zone. This might be due to the trust on the family or the relatives in giving support and close attention. With regard to reasons for preferring home delivery, (15.4 %) had mentioned smooth and short duration of labor, (7.7%) were preference to deliver in the presence of relatives, and 2.9% respectively. These findings have consistent with North Gondar study, (44.7%) were due to short and smooth duration of labour, and accordingly, factors influencing delivery service utilization of women were identified. The factors were related to women and utilization of service. The study has identified several socio-demographic factors that have important influence delivery service utilization. In line with other studies socio demographic characteristics such as educational status of the respondent, income and having radio were the common predictors for delivery service utilization increased knowledge and access to delivery service.

The finding is consistent with the findings in North Gonder, Peru, Tanzania, and Bangladesh. Educated women are more likely to use institutional delivery than not educated mothers. The possible explanation for why education is a key determinant could be that as a woman go up through the ladder of education, the more knowledgeable she will be about the use of health facility also education is likely to enhance female autonomy so that women develop greater confidence and capability to make decision about their own health. Mothers who reported access to radio were more utilize health facility

delivery service than mothers who had not reported.

Mothers who had good knowledge were about more likely to utilize delivery service than mothers who had poor knowledge. This finding was consistent to the study done in Sikela District, Amhara Region, and in Tanzania also showed that the proportion of women with skilled care at delivery increased with knowledge of danger sign from 91 percent among women who did not mention any to 100 percent among who did mentioned four almost or more danger signs (P <0.005). Finally, this study recommended further research on quality of maternal health services; particularly delivery services the reason for gaps between the factor that affect delivery service utilization, providers and mothers’ knowledge towards delivery service.

5. Strength and Limitation of the Study

This study identified that, Educational status, income, having radio, distance from health care center, knowledge of giving birth at health facility and knowledge on complication on labour of the women werean independent predictor of delivery service utilization.

The present study identified relatively good utilization delivery service in the study area during in the last two year of delivery. that is 73.2 percent of mothers delivered at health facilities while still majority had delivered at home.