"Trust system" is a kind of game system based on mutual trust among players. There is no referee who enforces the rules referred to as the "honor system", and this is why it is called a "trust system". Trust is regarded as dependency in the science of social psychology. Trustworthy individuals or groups mean that they seek practical policy, code of ethics, law and other previous commitments. Social exchange theory indicates that the essence of interpersonal communication depends on the both sides of the relationship between the cost and the profit. The interdependent relationship of two parties in a" trust system" means exchange, no matter what the content of the exchange are. Both sides express that they, at least, have some degree of related interest, or rely on each other to achieve his benefit. At this level, two sides have both the relationship of cooperation and competition. Cooperation and competition are interrelated dialectical unification. Competition exists in cooperation, which is the premise of competition.

Without cooperation in the competition composition, the relationship is weak and feeble or disruptive; and further it is lack of activity and lifelessness without encouraging cooperation under the condition of competing. By not paying attention to competition but only cooperation, and not paying attention to cooperation, the competition is unable to proceed. In competition and cooperation, both sides must be clear and abide by the rules, and the purpose of the rules needs to be more obvious. The traditional rules of the game are based on implied terms, and the participants have to accept the results of the competition. The referee who has the power of decision is the executor of the competition and the highest power, but the players compared to the referee are not equal at all. The relationship between the two sides is only competitive. However, the referee may also make subjective mistake, and make a unfair decision in accordance with wrong judgment. If the referee's decision is based on malicious or gross negligence, it not only violates the relevant rules of the game, but also is in violation of legal obligations [3]. For example western gymnastics, swimming, soccer, basketball, boxing; Asian martial arts and Judo [1], the antagonism decides the trust of "the participants" in traditional sports, social norms are ignored. Therefore, some sports groups and athletes acquire moral and material interests in the games, thus they violate the rules of the game, which is prohibited by law and unnecessary damage [2]. Athletes do not have a good code of conduct. Moreover, a "trust system" offsets the shortcoming of traditional systems of competition, which is that the contestants efforts are more active in enhancing the games fairness, and to make sports more humanize [4].

2. The Value of the Psychological Exercise 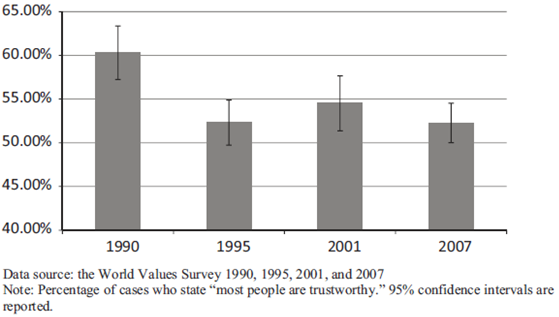 Interpersonal trust is established by interpersonal interaction during the process of communicating with words, commitment and an expected degree of reliability in written or oral statements. The students problem with interpersonal trust is the lack of confidence in their peers. They think that others are not genuinely concerned about them, and so they are hostile to others. Doubt is the core cognitive component of distrust and it causes negative assumptions in evaluating others’ psychological state during communication [8]. The sense of distrust will lead to individual negative emotions, such as self incompatibility, lack of a sense of security, lower subjective well-being and self identity confusion, which affects mental health. Therefore, it is seriously important to reconsider and bolster college students' interpersonal trust levels [9].

Physical exercise may induce positive thinking and emotions, and help cope with depression, anxiety and confusion, resisting in a negative state of mind (Northetal, 1990). The "trust system" greatly encourages the participants' subjective initiative and self-discipline. The contestants respectively undertake the role of the games players and referees. The "trust system" games difficulty, risk, degree of cooperation, and degree of interest are the main external stressors. Training subjects through observation, memory, imagination, collaborative cognitive activities such as active participation in the competition, complete the challenge. Based on college students' interpersonal trust problems stated above, and them being at a pivotal age of physiological and psychological development, college students are facing competition and increasing pressure from society, whether it is academic, financial, social or professional. Handing the aforementioned pressures requires good interpersonal relationships, and interpersonal relationships also need certain interpersonal skills to sustain them. These problems show us the importance of better handling interpersonal relationships between college students, and promoting exchanges between students. Declining interpersonal communication obstructs college students' study, emotional health and other aspects of life, and brings a series of negative effects. Improving interpersonal skills and creating good interpersonal relationships is also becoming a real problem. Some scholars believe sports are a solution to this problem. They focus on sports to improve college students' interpersonal trust and demonstrate the importance of interpersonal communication. For example, researchers in Xiamen used questionnaires to survey college basketball player positive emotions and current interpersonal trust levels. The results show that the students who participate in sports in all aspects of life had higher levels at positive emotions and interpersonal trust [15]. Researchers concluded that sports could improve college students' interpersonal skills and their ability to adapt to living environments both inside and outside of school [16]. Cheerleading training for female students may effectively promote their mental health and reduce social anxiety. [17]Improving the level of trust and cooperation, and promoting healthy psychological development [18]. The sports teams, the interpersonal relationship with the competition have higher level of solidarity, and thus athletes and their teammates have a mutual influence relationship based on trust and team performance [20]. Even in studies using prescribed sports as a means of intervention, the physical exercise along with a combination of comprehensive counseling has shown that college students' social anxiety, social avoidance and social distress have made positive changes in the overall level of mental health [21].

With the rapid development of modern society, people's working and life rhythm is faster and faster, the competition among people are becoming more and more fierce, and so work and life possess more and more uncertainties. This can cause interpersonal tension, jealousy, resentment, and otherwise undesirable moods. As a unique social activity, sports reflect social interpersonal relationships. A common activity, that allows people to know each other, and produces emotional response. Actual sports, not on the internet, but face to face, usually help people relieve trouble, tension, depression and other bad moods. This form of social support is easy for college students to get involved in. Through mutual experience, sports shorten the psychological distances between people, and promotes mutual understanding and communication.

In conclusion, sports helps participants establish equality, close and harmonious interpersonal relationships and build a more harmonious society and harmonious interpersonal relationships which is of great importance in the process of achieving happiness [22]. Generally, college students have large rate of participation in sports classes. The average university requires compulsory sports courses for freshmen and sophomores. Outdoor sports are given priority within the project in Dalian university of technology, for example, freshman students will take a general fitness course during their first semester, their next three semesters they will study various sports. Mastering the rules and providing strong base from which to participate in the "trust" game.

3. The Value of Students' Self Control Ability

As for "trust system" competition, it all depends on college students self control. For college students, self-control is the purpose of the game which can be realized throughout the course of the game. In carrying out a "trust system" competition, the system already conveys the message to players that I trust you, you are trustworthy. Meanwhile, in the field of management and education, the subjects of management or education experiments were given expectations and the opportunity, often achieved positive results. That effect is called "expectation effect" or Pygmalion effect. Also, the students may inwardly practice more, enhancing self-control, because the organizers of the competition in the system of the competition give the expectations. The rules in "trust system" mentioned: "in addition to the requirements, any player can't question calls made or report the other side. Rules exist for avoiding conflict and greatly reduce the conflict on the pitch, and the possibility of hostile situations". Thus, they greatly reduce the probability of hostile moods. Many roles, such as the referee, linesman, assistant referee, are dispensed with in the "trust" game, eliminating fundamentally unfair discrimination from the possibility of a handicapper and the hostility caused by identifying injustice. Pioneers of personality education believed that if the competitors were able to trust each other in the competition system and in any game relevant aspects, then participants would understand that "trust" was the core of the trust game, and participating students could place more emphasis on their personal gains and losses. Nowadays in China, there is more focusing on results, otherwise ignoring secondary gains. Anxiety and depression are extremely common. Focusing on results and ignoring personality development is a widespread practice. "Trust" games are a method to challenge these habits. They are promising way to develop the college student self-control ability in the future.

Zhang wei (1997) who was one of the earliest to focus on tennis competition in the United States, translated Tennis Competition manuals which allowed Chinese to become familiar with trust system. At present, several organizations have their players participate in "trust" games throughout China, especially in junior tennis. The results have been favorable and put tested into practice. In order to better understand distinction between the trust system and normal game rules, the following table will use tennis as an example (Table 1).

Table 1. The difference between the tennis "trust system" and the general rules of the game.

Currently, measuring this type of project, the rank of the project, performance needs of the referee according to specific rules and scoring methods, performance of the athletes for scoring, require for the consideration.

5. Discussions on the Findings

The" trust system" was introduced into college sports in order to reform and innovate in traditional sports competitions, and has had a profound influence on our country’s universities sports competition system. It not only increases the content of sports events, but also improves the usefulness of sports competitions fun, broadening the general game features and has an important significance in enhancing physical fitness for college students, cultivating healthy psychology, shaping tenacious will, raising cooperation consciousness, team spirit and the ability to socially adaptation [2]. Considering using the project average colleges and universities could improve the student's understanding in a social interaction. When students participate in the "trust system", it can have a psychological impact, helping them reconsider problems, and give inspiration to life.

The "trust system" is a type of heuristic education approach, along with comprehensive psychological training, guiding individuals to obtain high achievement, the trainee will apply the strategies from the training to solve problems found in other areas of life, and then improve their overall attitude. Sports rules and the interest of students have helped the "trust system" develop a good foundation. Good venues and equipment condition also provides support for colleges and universities to carry out the "trust system". For these reasons, it is necessary to rapidly implement the "Trust system" into college sports. "Trust system" not only allows students to experience the value and effect previously didn’t exist in traditional sports, but also improves conventional sports competitions, and is a new bright feature in university sports events. Through cognitive emotional and social interaction activities with reasonable use of curriculum resources, trust environments can help students fully explore their potential. It can also improve their relationships and mental health interest [24]. Moreover, it has been demonstrated that sports, both as the content and means, form the basic elements to build harmonious relationships, which play a very important role in reducing tension, conflict resolution, as well as building successful interpersonal relationships [22].

This work was supported by Fundamental Research Funds for the Central Universities (DUT15QY47).