Abstract: This project aims at determining the nutritional effects of Anagobaka on young wistar rats. These results have been composed to an infant weaning flour (Cerelac wheat) and a control diet made of fish flour. Rats have been fed during 15 days. The results of the chemical analysis have proved that Anagobaka contains 2.04±0.03% of protein, 6.04±0.11% of lipids and 82.1±0.94% of carbonate with an energetic value of 390.32 kcals. These results have been compared respectively to the ‟Cerelac wheat" with 14.94±0.16% of protein, 6.04±0.11% of lipid, 66,6±0,12% of carbohydrate and 434.01 kcals and to the control diet with 14.94±0.9% of protein, 8.8±0.66% of lipids, 72.2±0.28% of carbohydrate and 427.76 kcals. Viewing the nutrition, we notice that the growth, the gain in weight, the Food Coefficient (FC), the Protein Coefficient (PC) and the Apparent Digestibility (AP) are inferior to that of "Cerelac wheat" and to the control diet. Thus the presence of Anagobaka has occasioned the emaciation of– 0, 97 g/day on young rats.

From birth to the age of six months, all the nutritional needs of children are covered by mother’s milk [2,5,18]. Beyond this age, mother’s milk does not cover entirely energetic and protein needs [14,13,20]. It is the weaning period that goes from six months to two years. During that period, it is necessary to give the child liquid or semi liquid food to compensate mother’s milk. These complement foods should bring, in balanced proportion, major nutriments such as proteins, lipids and carbohydrates [5,10].

Among these weaning flours, there is Anagobaka. It is used by middle class mothers, as a complement food for infants. Unfortunately, this flour seems not to correspond to the norms of weaning. The first investigations made in health Centre, on children who came for consultation showed some signs of malnutrition on these children. In order to know if this malnutrition is caused by Anagobaka (milk custard) this survey has been made. It aims at determining the nutritional effects of Anagobaka through an experiment on rats Wistar and compare them. To those of the flour cereals’ wheat and the control diet.

The animals are Wistar male rat’s aged between 45 and 50 days, with an average weight of 56.25g, and coming from the animal center of the nutritional laboratory of (UFR biosciences, university Felix Houphouet-Boigny of Abidjan). The rats are dwelt in cages made with grid which permit to retain animal wastes upstream and collect urines downstream, which dumps in bottles through funnel. Cages are provided with feeding bottles to feed and make animals drink. These cages are in a room with a hygrometry degree from 70% to 80% and a temperature of 25°C.

It is determined by steaming at 70°C until obtaining an important mass of the experiment sample.

The proteins of solid and liquid products have been measured out according to kjedahl technique, with a coefficient of azote conversion in protein equal to 6, 25.

The fat is extracted after boiling 5g of the sample in a machine of soxhlet at 80°C. After evaporation of hexane the machine (rotavapor) the ball is cooled Doan and weighed [18].

The Content in ash is obtained by weighing 5g of the sample incinerated at 550°C during 24 hours in an oven (select horn, pselecta) [3].

The zinc the iron and calcium are measured out by the filtrate of the ash of the sample [3].

The energy of a diet is the sum of products of each major element (carbohydrates, proteins, lipids) and its thermal coefficient.

Each reading is the average followed by the examination of three tests. There is not important difference between two readings of the some line marked by the same letter.

For each diet (Anagobaka, Cerelac wheat, control group) corresponds a group of is ten young rats. The animal experiment made according to [1] method involves two phases: a growth experiment which lasted 15 days and an azote assessment which was made on the last five days.

I. Experiment and Measures Performed

Diets are served ad libitum once a day (at 7 h 30 in morning) on a paste form to avoid wasting. The water is served and renewed in an interval of three days. Animals are weighed before the experiment and then, each three days. The last weighing took place at the end of the experiment. The growth is determined by the difference between the initial weights. The difference between the quantity of food that has been served and the leftovers allows to determine the quantity of food that has been consumed. During the experiment of azote assessment, urines and animal wastes are collected each day. They are weighed and then conserved at-10°C for analyses.

II. Expressing the Parameters of the Nutritional Study

The parameters of the nutritional study are registered in the

Table 2. Expressing the parameters of the nutritional study.

F: protein excreted from the wastes of a rat fed with the diet.

The dry substance used is estimated at 7.93±1.25g/d for Anogobaka. Whereas the control diet and the Cerelac wheat have respectively a value of 7.48±0.86 g/d and 7.38±0.85 g/d. Not important difference has been observed between the three groups of vats consuming the diets.

3.1.3. Growth in Weight in the three Groups of Rats

The control of weights has permitted to evaluate the animal’s health. Anagobaka occasions a decrease in weight until the ninth day, and a slight positive evolution in the last week. Contrary to Anagobaka, Cerelac wheat and the control diet have occasioned a positive growth in weight on rats. Figure 1. 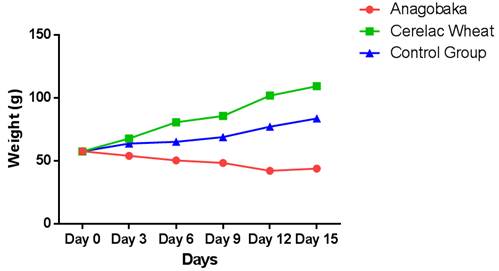 Figure 1. Growth in weight in the three groups of rats.

Each reading is the average followed by the examination of three tests.

a,b,c: there is no significant difference between two values of the some line topped with the some letter. 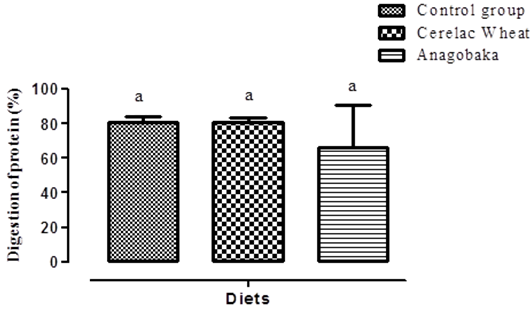 Each value is the mean ± SD of 10 rats. a: there is no significant difference between two values of the histogram topped with the same letter.

This study is based on two conventional approaches. Growth parameters and chemical analysis have permitted to appreciate the nutritional characteristics of Anagobaka, Cerelac wheat and the control diet.

The differences observed between the quantities of food eaten by the rats are not important ((P≥ 0.05). However, for rats fed with Anagobaka, the food consumed (7.94±0.88g/d) is slightly superior to that of animals fed with Cerelac wheat (7.48±0.88g/d) and the first experiment diet (7.32±0.88g/d). Anagobaka seems to be more appreciated than Cerelac wheat and the control diet.

Anagobaka is poor in protein (2.04±0.03 g/100 g DS) and presents a weakness in acids required for growth. This weakness occasions an emaciation on rats which consumed Anagobaka. In fact, proteins cannot be replaced by carbohydrate and lipids [12].

Thus, food containing less than 3% of protein cannot cover needs in protein even if they are used in great quantity [11] Generally, a lack in protein leads to a retardation of growth and a loss in weight [9].

The emaciation of rats which consumed Anagobaka is due to the weakness of protein contained in Anagobaka. Authors such as [17,8] have made similar remarks with young children who consumed a meal called ‹‹Poto-Poto›› rich in carbohydrate but poor in energy and protein. This meal is made of Maize or cassava.

Anagobaka seems to have the same characteristics with ‹‹Poto-Poto››. On the same way, the growth parameters clearly show the bad quality of proteins contained in Anagobaka.

Also, Anagobaka has a weak content of lipid (6.04g/100gMS) and energy (390Kcal/100gMS). Lipids are important energy source and also provide with essential fat acids. Lipids play an important role for satiety and growth in weight [4].

A food poor in energy and lipid leads to a loss in weight [6]. Our study show that Anagobaka is poor in lipid and protein and that leads to a continuous loss in weight despite the important concentration of carbohydrates.

[10] have made the same remarks in their survey about the nutritional value of normal bread and composite bread containing citrillus lanatus.

However, these results are under those obtained with soya flour and fish flour which are usual proteins used for animal experiment [5,6,20]. The chemical profile of Anagobaka could disturb the growth of those who consume it. Foody whose digestion is under 70% are unable to assure the needs of energy even if they are distributed ad libitum [19]. The digestion values of Anagobaka (66.17%), Cerelac wheat (80.83%) and the control diet (80.85%) confirm these remarks and explain the weakness and the loss in Wight of rats who consumed Anagobaka.

All these parameters, linked to the growth and the chemical composition have allowed to evaluate the nutritional quality of the different diets, and especially that of Anagobaka.

This study has permitted to compare the nutritional effects of Anagobaka. To those obtained with Cerelac wheat and a control diet made of fish flour. The food used, the growth in weight, the food and protein coefficients and the protein digestion have been determines. These parameters have revealed that Anagobaka has inferior a nutritional value to those of Cerelac wheat and the control diet. Thus, as young rats demand less essential acids than babies, these results could better explain the growth retardation observed with children consuming Anagobaka as weaning meal. However, additional studies are necessary to well appreciate the impact of Anagobaka on rats, so that to deduct its effects on children.

Authors of this article would like to thank the head of the Laboratory of Nutrition and Pharmacology at the University Felix Houphouet Boigny (Ivory Coast).