Abstract: Pyrazinamide is use for the treatment of tuberculosis in all over the world. Bio kinetics deals with the mathematical description of drug changes in the body with time function. This study was designed to investigate the bio kinetics of Pyrazinamide after oral administration of Pyrazinamide (25mg) tablet in 10 healthy volunteers. The blood samples of each volunteer were collected from 0.5 to 12 hours at different time intervals after the medication. The concentration of Pyrazinamide in plasma samples were determined by high performance liquid chromatography (HPLC). Quantitative observations were recorded that include the mean ± SD value of absorption rate constant (Ka), time to peak (Tmax) and peak concentration (Cmax) were 0.38 ± 0.25/h, 2.248 ± 0.64 h and 4.165 ± 2.13µg/mL, respectively. The mean ± SD values of absorption half-life (t1/2a) and elimination half-life (t1/2b) were 2.078 ± 1.678h and 0.2908 ± 1.721 hours. The mean ± SD values of volume of distribution and total body clearance were 40 ± 27.4L and 3.351 ± 1.27 h, respectively. Mean residue time (MRT) showed mean ± SD and area under curve (AUC) were 17.23 ± 12.78 h and 90.4 ± 76.2 h.mg/L, respectively.

Pyrazinamide is an important front-line drug for the treatment of tuberculosis (TB). Pyrazinamide, along with isoniazid and rifampicin, forms the cornerstone of modern TB therapy. Pyrazinamide plays a unique role in shortening the therapy from previously 9–12 months to 6 months, because it kills a population of semi-dormant tubercle bacilli in acidic pH environments that are not killed by other TB drugs. Pyrazinamide is a paradoxical and unconventional drug. Despite its remarkable sterilizing activity in vivo, pyrazinamide is not active against Mycobacterium tuberculosis under ‘normal’ culture conditions near neutral pH. Pyrazinamide is only active against M. tuberculosis at acid pH 10 and environment that is produced during active inflammation and its activity is closely related to the acidity of the medium. Currently, it is difficult to identify the sterilizing effects of old and new anti-TB drugs in short-term clinical trials because of the difficulty of separating the sterilizing activity of a single drug from that of multiple drugs used for therapy. One solution is a preclinical TB model in which the sterilizing effect can be studied and the results can be translated to the treatment of patients. Unfortunately, there are several problems in that regard. To begin with, the exact pH under which SRB survive in patients with TB is unknown. A pH range of 5.0 to 7.4 either has been measured in cavities containing M. tuberculosis or has been utilized for in vitro studies.

The ten female volunteers for this study were the students of university of agriculture, Faisalabad. Each volunteer was apprised of the design of the study, dosing and sampling protocol. The volunteers who willingly offered to participate were included in the study. The volunteers were kept fasting for 12 hours and after which the collection of normal or blank samples of blood were taken. The volunteers were allowed to take the Pyrazinamide tablets 3 × 400 mg each through the oral route.

Before drug administration, sterilized plastic branula was inserted intravenously and about 5 ml blood was collected in heparinized plastic centrifuge tube. The blood samples of each volunteer were collected at 0.5, 1, 1.5, 2, 2, 5, 3, 4, 6, 8, 10 and 24 hours after taken drug. The blood samples were centrifuged at 4000 rmp for 15 minutes. Plasma was carefully by pasture pipette and stored an glass tubes in freezer at -20˚C until analysis. Pyrazinamide concentration in plasma samples was determined by HPLC method described by Revenger et al, (1994). Chromatography was performed with a high performance liquid chromatography. The HPLC (Waters, 600 E) was used using an isocratic mode, UV detector 268nm, C18 BDS HYPERSIL (250×4.6) column. Flow rate was maintained at 1.0 mL/min having run time of 15min and retention time 5min.

The Plasma concentration time data was analyzed by two- compartment model, by using computer program. APO MW/PHARM version 3.02 (Holland, 1987).Graphs and tables have been prepared in Microsoft9 ®Excel Version 2002 (10.2614.2625. The mean values and standard deviation (SD) for each pharmacokinetic parameter were calculated in Microsoft Excel. 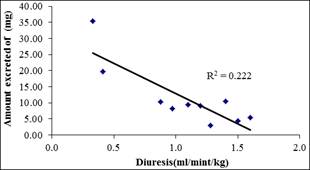 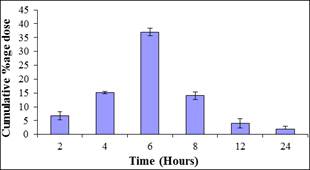 The first part of the curve shows a gradual increase of the drug concentration and after the maximum peak there was a decline in the concentration (Cmax) of the drug in plasma. (Peloquin et al., 1997) studied the pharmacokinetics of pyrazinamide (PZA) 1500 mg after oral administration in the plasma of healthy males as part of randomized cross-over and found the PZA a median C(max) of 2.80 microgram/ml, a T(max) of 1.0 h, and a t1/2 of 10.0 h. Volume of distribution is defined as that volume of fluid required to contain amount of drug in the body, if it was uniformly distributed at a concentration equal to that in plasma. The assumption made shows that body acts as single homogenous compartment with respect to drug. The apparent volume of distribution is not represented as actual volume but serve as proportionality constant relating concentration of drug in plasma at any time after distribution equilibrium has been attained to the amount present in the body (Baggot, 1997). The (mean ± SD) Volume of distribution following an oral dose of 1200 mg of pyrazinamide was 28.15 ± 8.44 liters. (Chan and Wong 1988) studied the volume of distribution in rabbits after an oral and intravenous dose after i-v (3.211 +/- 0.4121) than after oral (5.936 +/-1.6071) administration. The elimination t1/2 of PZA in CSF was nearly identical to that in plasma after either i.v. (1.07 +/- 0.20 h) or (1.84 +/-0.56 h) administration. The difference of present value of Vd from other values of Vd may be due to species difference. After the oral administration of 1200 mg tablets of pyrazinamide the total body clearance was ranged from 1.20 to 2.90 L/h and mean ± SD is 1.84 ± 0.54. (Ahmadi et al. 2005) reported that total plasma clearance was (5.39 +/- 0.43 and 14.7 +/-1.5 ml/Kg/min). (Roy et al., 1999) studied total body clearance 20.2+/-16.3 ml/minute in children (aged 6 to 12 tears) suffering from pulmonary tuberculosis. The differences are shown in value due to age and method. After the oral administration of 1200 mg of pyrazinamide the mean ± SD value of half-life was 2.80 to 15.60 hours. (Zhu, M et al 2002) The studies conducted in tuberculosis patient following oral dose Pharmacokinetic parameters of pyrazinamide were independent of human immunodeficiency virus status and patient demographics, except for body weight. Population elimination half-life values in pediatric and adult patients were 3.5 and 6.0 hours. (Lacroix et al., 1989) determined pharmacokinetics of PZA during hemo-dialysis in 6 patients with chronic renal impairment after a single oral dose of 25.7 (1.9) mg.kg-1. The dialysis clearance of PZA and of its metabolites was: Pyrazinamide 132 ml.min-1; pyrazinoic acid 121 ml/min-1; 5-hydroxy-pyrazinamide 107, l.min-1; 5-hydroxy-pyrazinoic acid 118 ml/min-1. The average amount extracted during a dialysis session of 4.1 h was 926 mg after an oral dose of 1700 mg. The high dialyze ability shows that PZA can properly be administrated at the end of each dialysis session in the usual dose of 25 to 30 mg.kg-1.This studies conducted in children (6 to 12 years) suffering from pulmonary tuberculosis after oral administration of pyrazinamide 35 mg/kg had elimination half-life 10.9+/-4.5 hours (Roy et al., 1999).This value is lower as compared to present value due to age difference. Area under curve after the oral administration of pyrazinamide was ranged between 413.90 to 936.10 h. mg/ 1 and mean ± SD value is 688.98 ± 173.74 h.mg/1. (McIlleron el at., 2006) reported of the area under concentration time curve from 0 to 8 h. The absorption rate constant after oral administration of 1200 pyrazinamide (mean ± SD) was ranged between 0.09 to 2.66 1/ hr and mean ± SD value is 1.07 ± 0.85 1/ hr. It represents the time at which area under curve (AUC) value measured is achieved. The MRT ranged between 13.84 to 22.89 hr and mean ± SD is 17.31 ±s3.04 hr.

Based on these findings we strongly recommend that dose regimens of imported drugs should be optimized under indigenous conditions. In this work, we used an easy technique and less expensive method for the extraction of drug from plasma samples. Simultaneously this HPLC method for determination of drug is easier, accurate, reproducible, economical and easy to conduct for routine drug analysis as it gives exact concentration of drugs as compared to other routine methods like bioassay, absorptiometry, polarography, TLC and GC with flame ionization detector (FID) and electron capture detector (ECD).