Abstract: The aim of this study was to determine the variation in morphology of seeds, seed oil content and the fatty acid profile of M. longifolia and, to find the relationship between oil content and fatty acid composition with environmental conditions. Seeds were collected representing four agro-climatic zones in Sri Lanka. The length (2.7333-3.4333 cm), width (1.0633-1.2967 cm) and the weight (0.9262-1.4018 g) were determined in seeds. Significant differences were there within agro-climatic zones. Oil from seed kernel was extracted with Soxhlet method using n-Hexane (bp. 65-70° C) and the fatty acid profile was determined using GC-MS (Gas chromatography-Mass spectrophotometry). Results reveal significant differences in oil content (50.07-53.85%) among agro-climatic zones. As the major fatty acids, Oleic, Stearic, Palmitic and Linoleic were resulted in all four agro-climatic zones. The total saturated fatty acid content (C18:0, C16:0, C14:0, C17:0, C19:0, C22:0, C24:0, C26:0, C20:0 and C8:0) varied from 40.87-47.20%. However the total unsaturated fatty acid content (C16:1, C18:1, C18:2, C20:1) was within the range of 49.6-53.86% (TMUFA+TPUFA), here the highest content was recorded in low country intermediate zone and the lowest in mid country intermediate zone. Oil content and the fatty acid composition were not correlated with the studied geographical parameters.

Madhuca longifolia (Family: Sapotaceae) is an important economic tree growing throughout the subtropical region of the Indo-Pak subcontinent including northern, central and southern part of peninsular India, Sri Lanka and Burma. There are two varieties of this plant as Madhuca longifolia (Koenig) J.F. Macb. var. longifolia and Madhuca longifolia (Koenig) J.F. Macb. var. latifolia (Roxb.) Cheval. Of the two varieties, var. longifolia is distributed in Sri Lanka, Southern India extending northwards to Maharashtra and Gujrat; var. latifolia is found in some parts of central and north India and Burma (Ramadan et al., 2006; Akshatha et al., 2013). This plant plays a significant role in both Indian and Sri Lankan traditional ayurvedic medicines. In ayurvedic, this is highly regarded as a universal panacea since it can be used to treat a wide range of illnesses. Almost all the parts of the plant including bark, flowers, seeds and leaves are used for that. The strong, hard and durable heartwood of the tree is used for house construction like activities. Flowers are edible and used as a food item of tribal either in raw or cooked forms. They are fermented to produce an alcoholic drink called as Mahua, country liquor (Kundu, 2012). This liquor is used to produce vinegar also. The plant produces fruit, valued for its seeds, which are the largest source of natural hard fat (ca. 50%), commercially known as mahua butter or mowrah butter, and has many other edible, medicinal and industrial applications (Sastri, 1962; Bringi, 1987; Singh and Singh, 1991). The crude oil extracted from the seeds is pale yellow and remains as a semi-solid in the tropical temperatures (Marikkar and Yanty, 2012).Oleic acid (46.3%), palmitic acid (17.8%), stearic acid (14.0%), and linoleic acid (17.9%) have identified as the major fatty acids in M. longifolia seed oil (Singh and Singh, 1991). According to Ramadan et al., (2006), about 46% of the fatty acids present in M. longifolia seed oil is saturated, 37.4% mono unsaturated, and 16.5% poly unsaturated. Therefore it seems that it contains necessary amount of essential fatty acids. The predominance of mono unsaturation likens mahua fat to olive oil which has been found by nutritionists to be as effective as polyunsaturated oil in reducing blood cholesterol, hence reducing the incidence of coronary heart disease (CHD) (Lawson, 1995).These characteristics in M. longifolia seed fat make it a high quality food.

The oil yield from the crops is always the key factor to decide its suitability for nutritional and industrial purposes from economic point of view (Yadav et al., 2011). In that case, M. longifolia yields a considerable amount of oil as mentioned previously. But the use of this oil for the food industry has been carried out in a limited scale. In Sri Lanka, almost all these edible purposes have limited only for cooking in traditional culture. This also is in very small scale and considers that seeds as an under-utilized seed type for the production of oil. According to the past reports, the under-utility of this fat may probably due to the lack of technical information regarding this tree. Few reports can be found with the literature highlighting the fatty acid profile, thermal characteristics, and the bio active constituents of M. longifolia oil.

However these previous researches have focused on the chemical composition of M. longifolia seed oil, there is no data about the variation of morphology in seed material, its fatty acid profile and the effect of geographical and environmental factors on them. In economic point of view, it is important to identify this natural variation to improve the quality of plant for different purposes. Studying this variation may help to identify the plants with best fatty acid profile which suits for different economic applications (different industries). Therefore, the aim of this study was to identify the variation in morphology of seeds and to quantify the variation in fatty acid profile and oil content in several agro-climatic zones in Sri Lanka and to determine the relationship between those characteristics with some geographical factors.

The dried, fallen fruit seeds of M. longifolia were collected from four different agro-climatic zones in Sri Lanka during August-December 2014 using the random sampling method. Even though there are seven agro-climatic zones in Sri Lanka, these four were selected for the study based on the availability of plant. The four agro-climatic zones were low country dry zone (LD), low country wet zone (LW), low country intermediate zone (LI) and mid country intermediate zone (MI). The geographical characteristics and the soil type of the selected area were recorded. Table 1 shows the geographical data where the samples were collected. The collected samples were named with symbols as LD, LW, LI and MI with respect to their agro-climatic zone. The species and the variety of the plant were confirmed by comparing the morphological characteristics.

2.2. Determination of Morphological Differences in Seeds

The basic morphological characteristics of the seeds including the length, width and the weight were determined (n=30).

The total oil content of seed kernels was determined using the Soxhlet system according to the AOAC method (AOAC, 1990). Preliminary tests were performed to select the optimal conditions that give the highest yield of oil (solvent and extraction time). For that, oil extraction was carried out for 6hrs, 5hrs and 4hrs with n-Hexane (bp.65-70° C) and Petroleum ether (bp.40-60°C). When consider about the extraction time, the majority (99%) of yield was obtained during the first 4 hrs. Best organoleptic properties (especially with respect to odor) as well as the best appearance and clear oil were obtained with n-Hexane compared to pet ether. Therefore, 4hrs extraction time with n-Hexane was used as the method of oil extraction for all samples. The sample of 5 g was placed in the Soxhlet extraction apparatus and it was extracted for 4hrs. The extracted oil was weighed and the yield was calculated as the percentage. The oil was stored in a refrigerator (4° C) for the determination of fatty acid profile.

Fatty acid methyl esters (FAMEs) were prepared using the method described by ITI, Sri Lanka (Anonymous, n.d., Method manual for preparation of fatty acid methyl esters, ITI, Sri Lanka). They were identified on Gas Chromatograph (GC) model-7890 A, Agilent technologies equipped with Mass Spectrometer (MS) model-5975 C inert XL EI/CI MSD with triple-axis detector. Nitrogen was used as the carrier gas with a flow rate of 1 ml/min. A polar capillary column RTX-5, 0.32 mm internal diameter, 30 m length and 0.25 μm film thickness (Restex Corp., Bellefonte, PA, USA) was used for the separation of FAMEs. The injection volume of the sample was 2 µl and it was injected at a temperature of 270 ºC. The initial column temperature was 100 ºC programmed by 20 ºC/min until 170 ºC (hold time 0 min), then 2 ºC/min until 230 ºC (hold time 0 min) and finally 5 ºC/min until 280 ºC (hold time 16.5 min). The total run time of the sample was 60 min. The percentage of fatty acids was calculated as the ratio of the partial area to the total peak area of FAMEs.

Data collected were analyzed using the Minitab 17 statistical software. One way analysis of variance was performed to compare the length, width and the weight of seeds in different agro-climatic zones. Mean comparisons were done with the Tukey test at 5% significant level. Mean oil content in four agro-climatic zones was assessed for significant differences using Fisher LSD method at 5% significant level. Spearman Rho correlation was also calculated for oil content and fatty acid composition with geographical factors.

3.1. Determination of Morphological Differences in Seeds

Means that do not share a letter are significantly different at significant level 0.05 (Tukey test).

Forest tree populations, compared to agricultural crops, have been influenced little by human activities until now. In fact, trees like jatropha, mahua (M. longifolia), neem and many other important tree species have not been subjected to any genetic improvement efforts and, therefore, are considered to possess greater natural variability compared to other crop plants. Moreover, it is an established fact that tree species with a wide geographical distribution exhibit considerable anatomical, physiological, morphological and genetical variability to survive under varying environmental conditions (Kaura et al., 1998; Kaushik et al., 2007).When consider about the seed samples used for this study, they were obtained from the plants grown in different areas with different climatic and environmental conditions (as shown in Table 1). That might be the reason for these morphological differences in seeds. 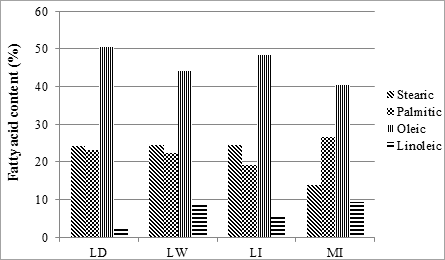 Results indicate that there is a considerable variation among the individual fatty acid contents obtained from different agro-climatic zones. It is well-known that the fatty acid composition is much influenced by environment factors (climate, soil type, etc.) and genetic factors under which they are grown (Aabd et al., 2013).

Although M. longifolia is a locally available plant in Sri Lanka, studies regarding its seed oil are limited. Especially, the impact of geographical factors on the variation of seed properties (morphology, oil content and fatty acid profile) cannot be found at all. In concluding this study, morphological characteristics of seeds (length, width and the weight) differ significantly in four agro-climatic zones. Oil content (50.07-53.85%) was also significantly different for four agro-climatic zones. Oleic, Linoleic, Palmitic and Steric were the predominant fatty acids in all 4 agro-climatic zones. The percentages of four prominent fatty acid types were varied considerably among 4 agro-climatic zones showing the effect of locality on the fatty acid composition. Oil content and the Fatty acid composition were not correlated with the studied geographical factors but, there can be the impact of other environmental conditions.