The main goals of this paper are to offer a method to generate spatially correlated binary data through a copulas method. In probability theory and statistics, a copula is a multivariate probability distribution for which the marginal probability distribution of each variable is uniform. Copulas are used to describe the dependence between random variables. They are named for their resemblance to grammatical copulas in linguistics. Sklar's Theorem states that any multivariate joint distribution can be written in terms of univariate marginal distribution functions and a copula which describes the dependence structure between the variables. Copulas are popular in high-dimensional statistical applications as they allow one to easily model and estimate the distribution of random vectors by estimating marginal and copulas separately. There are many parametric copula families available, which usually have parameters that control the strength of dependence.

Simulating spatial data is very important on many cases. The absence of replication in most spatial data sets requires repeated observation of a phenomenon to obtain empirical estimates of mean, variation, and covariation. In this paper, the authors only focus on spatially correlated binary data, which are encountered in many applications ranging from epidemiology to forestry. Infectious disease data often have spatially clustered observations. In forestry binary responses, for example, the presence or absence of some disease is often observed.

Park et al. (1996) developed a method for generating spatial binary data based on generating correlated Poisson random variables which are then recoded as zero or one. Al-osh and Lee (2001) introduced a simpler approach than that of Park et.al (1996) for generating non-negatively correlated binary data. Their proposed method only uses properties of binary random variates that eliminates the need for the intermediate step of using correlated Poisson variates as in Park et.al (1996). The key idea lies in the fact that any Bernoulli random variable can be expressed as a convolution of other independent Bernoulli random variables and that correlation among the binary observations can arise as a result of their sharing some common elements that induce such correlation. The algorithms of Al-osh and Lee (2001) are almost the same as Park et al. (1996), and their demonstrations and results on simulating 3-dimensional binary vectors are similar, and only differ in whether the convolution is of Poisson variables or Bernoulli variables. In comparing these two methods’ efficiency, Al-osh and Lee’s method is expected to be more efficient since it generates binary variables directly without any intermediate step as in Park et al.'s method.

However, Al-osh and Lee (2001) did not discuss the restrictions of their method very much, and just stated that their algorithm should work for most practical cases in generating a vector of binary variates with nonnegative correlation structure. Their method is not as powerful as claimed. The restrictions on the possible combinations of mean and correlation structure required in their algorithm are such that no single simulation method can handle moderate to large sample sizes easily together with the restrictions. Unlike Park et al. (1996) and Al-osh and Lee (2001), Qaqish (2003) introduced a family of multivariate binary distributions with a certain conditional linear property. This family is particularly useful for efficient and easy simulation of correlated binary variables with a given marginal mean vector

. His method can be used to generate spatially correlated binary data with non-constant mean, but this method also had restrictions. Qaqish (2003) stated a Lemma giving restrictions on

, Qaqish (2003) then suggested trying permutations of

and computing numerical inverse of the permutated

and checking those that satisified the conditions of the Lemma, but he noted that this was not a practical approach for actual simulation work as even for a small sample size 50, the number of possible permutations

is a huge figure

with spatial correlation matrices were done here and none of the 10000 permutations met the conditions of the Lemma.

In this paper, a method based from copulas for generating spatially correlated binary variables are developed that do not have the shortcomings of the methods above. This copulas method is simple but are totally new and not found elsewhere.

Copulas method is a simulation method, and it is easy to understand and manipulate. This method is wildly used to mathematical experiments, and its procedure is explained in this section.

is uniform distributed in

. Then random variables are then generated as required based on

are generated based on

be spatially correlated, and let

with arbitrary mean and variance,

is always uniformly distributed in

. For simplicity it is assumed

, the procedure is as follows:

. There is no closed form relationship between

are spatially correlated based on the spatial correlation between

. The nature of the correlation is investigated here through the relationship between the processes.

For an isotropic second-order stationary spatial process, the variogram function

is expected to increase as

increases. At the range

of the sill. For the spatial process

, if its variogram achieves the sill at

. By the copulas algorithm, it is clear the corresponding

. It can be concluded therefore, that the process

has the same range as

. But when the variogram of

achieves the sill only asymptotically, then for arbitrary

will be close to

but still bigger than

. By the copulas algorithm, for the corresponding

also achieves its sill only asymptotically. However,

have different scales, and there is no closed form for the relationship of the covariance functions between

2.2. Description of the Simulation Study

with sample size 100 on a regular grid were generated. The grid chosen was on

with intervals of 4 in both directions. The maximum distance between the data points was 50.91 and a half of this was 25.46. Gaussian, exponential and spherical variograms of

The smoothness of the process increases with

). The spherical variogram given by

is also commonly used. A nugget effect can be incorporated by adding a constant. Figure 1 gives an illustration. The spherical model attains its sill, but the Matérn models achieve their sill only asymptotically and thus their practical ranges are defined as where 95% of the sill is attained. 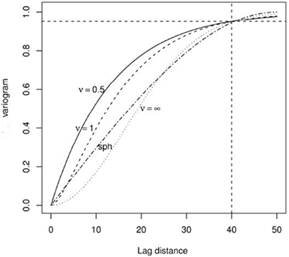 and practical range 40 indicated by the vertical line. The horizontal line denotes 95% of the sill.

by the copulas method introduced in this paper. The definition of

is a random number from a uniform distribution on

. Thus the mean of the generated

in the conditional method were generated by the SAS SIM2D Procedure.

3.1. Simulations of the Data

were first generated on the regular grid

with intervals of 4 in both directions. The Gaussian, exponential and spherical correlation types were considered for

were transformed to uniformly distributed data

was the distribution function of

. i.e. the Gaussian. A sample of size 100 spatial binary data

were then generated by the simple transformation,

. In this section, the results of the analysis of the spatial binary data generated by copulas method are shown below.

One simulation of a realized dataset of Gaussian random field data

and the corresponding spatial binary data generated by the copulas method are shown in Figure2. Here the sill and nugget of the variogram of the Gaussian random field were chosen to be 1 and 0 respectively. From the plots, it can be seen that the spatial patterns in the generated binary data were different from the spatial patterns in the corresponding Gaussian random field. The

were transformed to uniformly distributed data

were determined without regard to 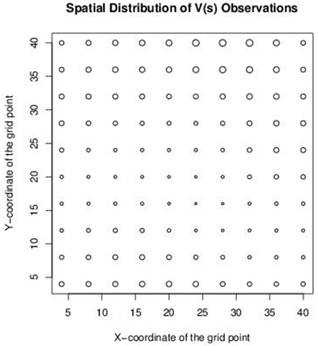 (a) A plot of V(s) with Gaussian variogram 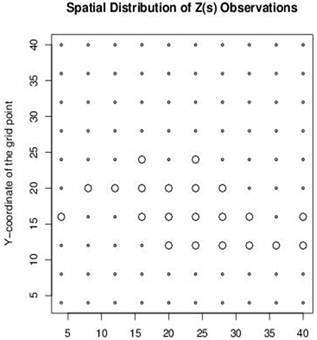 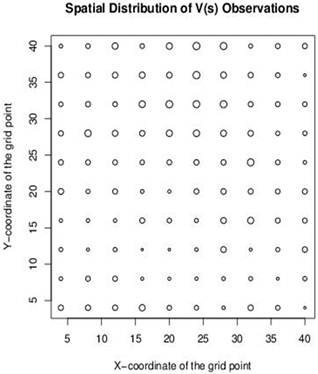 (c) A plot of V(s) with an exponential variogram 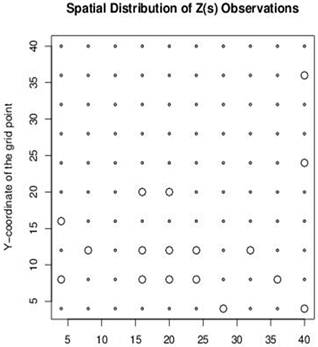 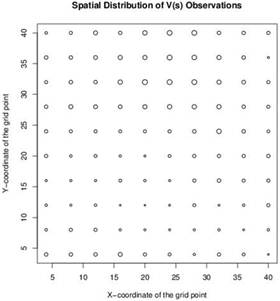 (e) A plot of V(s) with spherical variogram 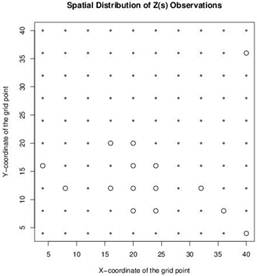 with Gaussian, exponential and spherical variograms generated on the grid

with intervals of 4 in both directions and shown in (a), (c), (e) respectively. In all plots, the size of circles are proportional to their numeric values. The (b), (d), (f) were the corresponding generated spatial binary data

by the copulas method. Here the sill and nugget of the variogram of the Gaussian random field data were chosen to be 1 and 0 respectively.

In this section, to examine the relationship of the variogram between the data sets

, 500 simulations were done. For the data

were set as in Method section. For the constant mean case, the mean of

were simply taken to be 0.27. In each simulation, the Matheron estimators of the variograms of

were calculated. In order to accurately estimate the variograms, only lags which had more than 30 data pairs were kept. As the

. For the case of nuggets 1/3 and 2/3, similar results to that of Figure 3 were seen. As can be seen in Figure 3, clearly there is spatial association between the

were found to have a similar spatial correlation type as the

. Note that the variograms of

have similar practical range, which was as expected in Method section. There is no closed form for the connection between the correlation functions of

. However, from the plot, it can be concluded that the copulas method kept a similar correlation type. From this same simulation, note that the nugget and sill of the variogram of

are different from that of

. A comparison of the variograms in Figures 3 (b) and (c), shows the two plots are very similar. This may be because the non-constant means of

had a small variation around 0.27 (the value of the constant mean). However, in the Figure 3 (c) the non-constant mean variogram had a little more fluctuation at the big lags than Figure 3 (b). 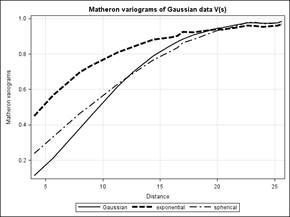 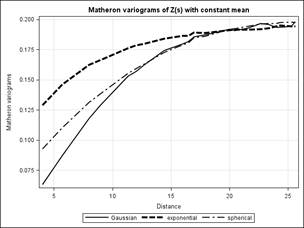 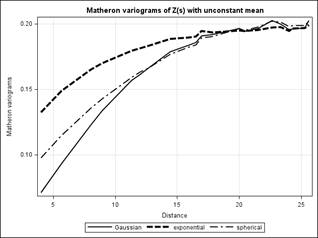 with constant mean, and the spatial binary data

with non-constant mean respectively. In Figure (a), the exp, Gaussian and sph denote the

generated from the corresponding

in Figure (a). This Figure shows results only for a nugget of 0 in each variogram of