Abstract: Quantum mechanical qubit states as elements of two dimensional complex Hilbert space can be generalized to elements of even subalgebra of geometric algebra over three dimensional Euclidian space. The construction critically depends on generalization of formal, unspecified, complex plane to arbitrary variable, but explicitly defined, planes in 3D, and of usual Hopf fibration to special maps of the geometric algebra elements to the unit sphere in 3D generated by arbitrary unit value bivectors. Analysis of the structure of the map of the even subalgebra to the Hilbert space demonstrates that quantum state evolution in the latter gives only restricted information compared to that in geometric algebra.

of two dimensional complex vectors, can be generalized to unit value elements

. I called such generalized qubits

Some minimal information about

is linear space with canonical basis

are orthonormal basis vectors in

as edges, with orientation defined by rotation

is spanned by scalar

is a unit size oriented area, bivector, lying in an arbitrary given plane

is linear combination of basis bivectors

is an arbitrary, though explicitly defined, plane in

are "complex numbers" depending on

is actually associated with some unspecified

– everything is going on in one tacit fixed plane, not in 3D world. Usually

is considered just as a "number" with additional algebraic property

. That may be a source of ambiguities, as it happens in quantum mechanics.

. It has the property

(bivector flips, changes orientation to the opposite, in swapping the edge vectors). Then changing of handedness, for example by

Any basis vector is conjugate (conjugation means multiplication by

), or dual, to a basis bivector and inverse. For example

. By multiplying these equations from left or right by

. Such duality holds for arbitrary, not just basis, vectors and bivectors. Any vector

is conjugate to some bivector:

and for any bivector

. Good to remember that in

vector and bivector are in handedness opposite to

they are in the same handedness as

.One can also think about

as a right (left) single thread screw helix of the height one. In this way

All above remains true (see Fig.1b) if we replace basis bivectors

by an arbitrary triple of unit bivectors

satisfying the same multiplication rules which are valid for 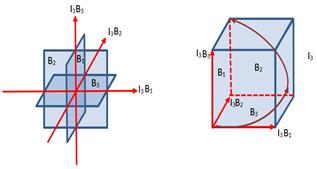 2. Parameterization of Unit Value Elements in G3+ and C2 by Points of S3

I will use notation

for such elements. They can be considered as points on unit radius sphere in the sense that any point

Explicit relations, based on their parameterization by

can be established through the following construction2.

is chosen as defining the complex plane

Hence we get the map:

In the similar way, for two other selections of complex plane we get:

So we have three different maps

There exists infinite number of options to select the triple

. It means that to recover a

in 3D associated with

it is necessary, firstly, to define which bivector

is then defined by the first two by orientation (handedness, right screw in the used case ):

The conclusion is that to each single element (2.1) there corresponds infinite number of elements

depending on choosing of a triple of orthonormal bivectors

in 3D satisfying (1.1), and associating one of them with complex plane. This allows constructing map, fibration

Take general definition of fiber bundle as a set

is bundle (or total) space;

- Lie group which acts effectively on

, such that each space

, is homeomorphic to standard fiber

We can think about the map

as total space and

as base space. I will denote them as

depends on which particular

is taken from an arbitrary triple

satisfying (1.1) as associated complex plane of complex vectors of

and explicitly given by (2.2), so we should write

is comprised of all elements

with an arbitrary triple of orthonormal bivectors

in 3D satisfying (1.1). That particularly means that standard fiber is equivalent to the group of rotations of the triple

Fig. 3. Two sections of a fiber: The left one received from the right by 90 degree counterclockwise rotation around vertical axis.

All such rotations in

are also identified by elements of

since for any bivector

So, standard fiber is identified as

and composition of rotations is:

All that means that the fibration

Now the explanation why

was taken as complex plane. As was shown in [1], [6] the variant of classical Hopf fibration

can be received as one of the cases of generalized Hopf fibrations:

and for two other basis bivectors:

In the literature mostly the third or the first variants are called Hopf fibrations. For my considerations it does not matter which variant to choose. I take the case (3.4) with

We need to temporarily get back to the case of

is taken. It generates

is usual geometric product of two vectors: first member is scalar product of the vectors and second member is oriented area (bivector) swept by rotating

by the angle which is less than

. I am using notation

For further convenience, let’s construct a matrix basis isomorphic to

. Commonly used agreement will be that scalars are identified with scalar matrices, for example:

case the second order matrices will suffice to get necessary isomorphism. Let’s take

[4] as corresponding to geometric basis vectors

. They satisfy the properties mentioned above, for example

as it should be. If we take two arbitrary vectors expanded in basis

then their product is:

rotates the vector by

. We can conclude that such multiplications give basis vectors of the tangent spaces to the original vectors.

Fig. 4. Vector is rotated by 90 degrees when multiplied by basis bivector.

This is identical to considering even elements

corresponding to vectors and their multiplication by

This is arbitrary real valued matrix of the second order. Inversely, any matrix of second order can be uniquely mapped to the element of

, we need basis matrices of a higher order because a second order non-zero matrix orthogonal in the sense of scalar product (4.1) to both

It is easy to verify that the three, playing the role of three-dimensional orthonormal basis, necessary matrices can be taken as 4th-order block matrices:

. Easy to see that

By multiplications in full

form one can easily proof that block-wise multiplications are correct, the basis

that is exactly (1.1) with basis bivectors

Following all that we can write general element

This is arbitrary "complex" valued matrix where "imaginary unit" is matrix

, corresponding to bivector expanded in the first two basis vectors

, that geometrically is bivector

. Inversely, any "complex" valued matrix can be written as

belongs to even subalgebra

we have from (4.2) the correspondence:

In the same way as in the

elements are orthogonal to

and to each other, and are the tangent space basis elements at points

are orthogonal, in the sense of Euclidean scalar product in

, to each other and to the projection

of the original state in

. They are the tangent space basis elements in

5. Hamiltonians in C2︱S3 and Their Lifts in G3

in its most general form:

and does not belong to

, though the result of its action on an element from

. Let’s prove that. Take a qubit and a Hamiltonian in

For each single qubit

its fiber (full preimage) in

with an arbitrary triple of orthonormal bivectors 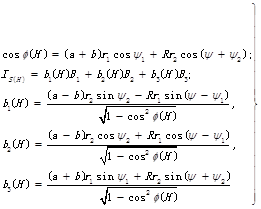 We can also explicitly write the element

which, acting (from the right) on

is multiplication by an exponent:

Then the fiber of

In other words, Clifford translations in

are equivalent to multiplications of fibers in

(which is associated with formal imaginary unit

) and the same phase

In commonly used quantum mechanics all states from the set

are considered as identical to the state

, they have the same values of observables. That is not commonly true for

-qubits. Only in the case when all the observables common plane, say

leaves any such observable

is varying. Then the tangent to Clifford orbit is

It is orthogonal to

in the sense of usual scalar product in

(translational velocity of Clifford translation is one).

and pairwise orthogonal. That means they span tangent space and the plane spanned by

is orthogonal to the Clifford orbit plane spanned by

The vector of translational velocity rotates while moving in the orbit plane. Both

also rotates with the same unit value angular velocity since

To make the planes of rotations clearly identified, that is difficult to do with formal imaginary unit, let’s lift Clifford translation to

using (6.1). Translational velocity, similar to the

and is orthogonal to

Two other components of the tangent space, orthogonal to

at any point of the orbit, are

[7]. Their velocities while moving along Clifford orbit are:

and looking in the direction

and looking in the direction

also make full rotation in their own plane by

. This is special case of the

Evolution of a quantum state described in terms of

Hilbert space model. It confirms the idea that distinctions between "quantum" and "classical" states become less deep if a more appropriate mathematical formalism is used. This paradigm spreads from trivial phenomena like tossed coin experiment [7] to recent results on entanglement and Bell theorem [8] where the former was demonstrated as not exclusively quantum property.

[1] This sum bears the sense "something and something". It is not a sum of geometrically similar elements giving another element of the same type, see [7], [9].

[2] Though both  and  can be parametrized by points of , it is not correct to say that  is sphere  or -qubit is sphere .

[3] It is often convenient to write elements  as exponents: .

[4] I begin with ordinary real component matrices. That is why the order of Pauli matrices in my following definition is different from usual one. An analogue of "imaginary" unit should logically be the last one, after pure real items.

[5] It is called "translation" because does not change distance between elements.

[7] Clearly, the three  are identical to earlier considered tangents