Research Status of the Quaternary Sedimentation in the Chengdu Basin

1Institute of Environment and Resources, Southwest University of Science and Technology, Mianyang, China

Abstract: The Quaternary of the Chengdu Basin contains abundant geological information. After being studied for decades, there are still some disputes over the Quaternary sedimentary environment and evolution and the filling sequence of basin, etc., on the whole even though some common perspectives have been reached with regard to stratigraphic architecture and structural characteristics. Particularly, more aspects must be further studied, including gravel characteristics and response to tectonic activity. 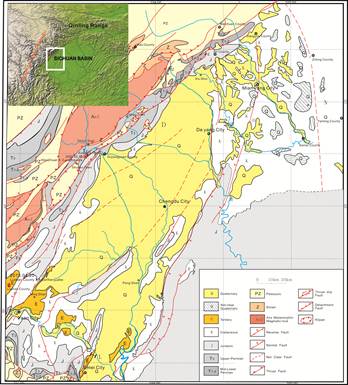 Situated in the west of the Sichuan Basin, the Chengdu Basin stands between Longmen Mountain and Longquan Mountain in the east-west direction and extends to Xiushui of Qi’an County in the north and the regions of Mingshan and Pengshan in the south (Figure 1). In the late Cenozoic era, the edge of the basin descended abruptly to form a highly thick layer of Quaternary sediments dominated by sedimentation of mountain-front molasse and sand-conglomerate (Liu, 1983), while Longmen Mountain was uplifted dramatically at the southeastern edge of the Qinghai-Tibet Plateau. The formation is not only attributed to climatic conditions and effect of water flow, but also restricted by the strength and pattern of tectonic movement, so it contains abundant information on tectonic movement and deformation. In addition to ideal geographic and tectonic conditions, the region is always one of the key regions in the study on the late Cenozoic deformation of plateau, the uplift of plateau and the paleogeographic and palaeoclimatic changes (Xu et al., 1997). Meanwhile, it is also crucial to the study on the changes of climate & water system and ecological environment in the upstream region of the Yangtze River (Liang et al. 2014).

2. Formation of the Chengdu Basin

The Chengdu Basin situates in the west of the Sichuan Basin. It stands between Longmen Mountain and Longquan Mountain in the east-west direction and extends to Xiushui of Qi’an County in the north and the regions of Mingshan and Pengshan in the south. A highly thick layer of Quaternary sediments dominated by sedimentation of mountain-front molasse and sand-conglomerate is formed within the basin (Fig. 1). According to 1:200,000 geological map (1980), the sediments are divided into middle and lower Pleistocene Dayi conglomerate and Yaan conglomerate, upper Pleistocene Guanghan strata (Jiangbei gravel bed) and Chengdu clay and Holocene.

With regard to the formation of the Chengdu Plain (Basin), there are different views of point. Li et al., (1964) put forward for the first time that the Chengdu Plain was a Cenozoic tectonic basin, and named it the Chengdu Depression with the Quaternary sedimentation of more than 300m. He (1987) argued that it was a compression-torsion downfaulted basin of the Quaternary downfault. (Xu and Liu, 1982) believed that the ramp of north-east Longmen Mountain fault and Longquan Mountain fault at the end of the Tertiary period gave birth to the Chengdu Basin, and the ramp was further developed in the middle and late Quaternary period to make hills on both sides of the basin rise continuously and deepen the central depression of the basin. Xu et al. (1997)claimed that, in the Quaternary period, the north-east Quaternary fault developed in the west of Longquan Mountain inside the Sichuan Basin, and the Quaternary downfaulted basin (the Chengdu Basin) was formed. There was a static tectonic period between the Miocene epoch and the Pliocene epoch, and the Chengdu Basin was a new basin overlapping high planation surface. After studying the shape and structure of the basin and its relations with Longmen Mountain fault zone, they believed that the Chengdu Basin was not the fore-land basin of Longmen Mountain tectonic belt anymore, and objected that Dayi conglomerate would be regarded as the early Pleistocene molasse structure at the eastern edge of the Qinghai-Tibet Plateau. Li et al. (2011) pointed out that in the Early Jurassic, the current Sichuan Basin was still developing as fore-land basin, which developed into the belt within the front range of Longmen Mountain in the Cretaceous period, gradually disappeared in the Tertiary and Quaternary periods, and ended in the current architecture.

3. Studies of the Quaternary Formation in the Basin

The Quaternary formation in the basin is dominated by terrigenous clast accumulation and mainly consists of sediments in the alluvial fans and frontal alluvial plain created by the crosswise rivers that traversed Longmen Mountain. Its extension is constrained by two water systems, i.e. Minjiang River and Tuojiang River. Zeng and Li (1994) believed that the Quaternary sediments of the Chengdu Basin vertically formed the retrograding tectonic sequence, which was composed of 3 fining-upward retrograding sequences, and were accompanied by the cyclical appearance of coarse wedge-shaped clastics featuring conglomerate or gravel bed. On this basis, Li et al (2002) divided the evolution of the Quaternary Chengdu Basin into three phases, and claimed that the reverse thrust activity of Longmen Mountain controlled the formation of basin in the first and second phases, while the strike-slip activity limited the formation of basin in the third phase.

Zhou (1986) believed that the clay of the Chengdu Plain was carried by the floating ices, so it must be dated to the Quaternary early Pleistocene period. Chen et al. (1990) concluded that Guanghan clay and Chengdu clay belonged to the upper Pleistocene period based on the analysis of C ages and sporo-pollen, clay mineral, grain size and other data. Guanghan clay was formed 25,000~500,000 years ago, so it belonged to the river-lake sediments in the middle and late stages of the late Quaternary period. Chengdu clay was formed 10,000~25,000 years ago, so it was the aeolian sedimentation at the end of the late Pleistocene period. Qiao et al. (2007) and Yang et al. (2010) studied the magnetic stratigraphic, sedimentologic and geochemical properties of two profile systems in Shengli and Huangjia of Shuangliu County, Chengdu, and discovered that the red earth accumulation in the region was formed in the middle of the Quaternary period, and the mother substances for clay and patterned red earth in Chengdu might be aeolian. Moreover, they pointed out that the climatic characteristics of relative coldness-coolness in the Chengdu Plain in the middle of the Quaternary period were the regional response to the global climatic changes, while the quick uplift of the Qinghai-Tibet Plateau and the expansion of the glaciers might be the direct causes for the lower temperature in the region. And Yang et al. (2010) conducted the dating for clay on the profile of Anchang River, indicating that the sedimentation started in 528ka B.P, and argued that the widely distributed loess bed in the Chengdu Plain must be an embodiment of quick uplift in the Qinghai-Tibet Plateau. On the basis of predecessors' research, Feng et al. (2014) systematically discussed the origin, provenance, age and climatic links of the Chengdu Clay.

5. Tectonic Response of the Quaternary Gravel

As an important component of sedimentary rocks, gravel has its special significance to the evolution of the basin and its formation is closely connected to crustal activity. The gravel bed in fore-land basin can be even regarded as the sign to indicate when uplift starts or becomes stronger in the plain. The study of gravel can help identify the position, lithology, exposure and climatic condition of source and the tectonic activity in the source area, and delve into the uplifting process of neighboring mountains and the activity history of major faults.

The gravel bed of the Chengdu Plain is of great significance to the study of the Quaternary formation, basin evolution, neotectonic movement and paleo-environment, etc. Especially, the tectonic significance revealed by the gravel bed has attracted much attention. Li et al. (2006) studied the typical Quaternary gravel sedimentary profile in the west of the basin, put forward the sedimentation response model for Longmen Mountain thrust belt against the reverse thrust-nappe effect, and claimed that the Chengdu Basin was a strike-slip extrusion basin under the joint effect of strike-slip and reverse thrust of Longmen Mountain orogenic belt in the late Cenozoic era. In addition, they divided the evolution of the Quaternary Chengdu Basin into three phases, and believed that the reverse thrust activity of Longmen Mountain controlled the formation of basin in the first and second phases, while the strike-slip activity limited the formation of basin in the third phase. Cui et al. (2009) studied 6 gravel beds in Pleistocene profile of Yaan and other regions, and concluded that all 4 Pleistocene gravel beds were composed of clastic sediments in the fore-land basin from ancient Qingyi River as it was affected by the nappe tectonics of Longmen Mountain between the late Pliocene epoch and the late Pleistocene epoch.

Through the study on the Neogene conglomerate in Yutang Town, which is the middle section of Longmen Mountain tectonic belt, He et al. (2011) argued that it reflected the increasingly intense Neogene crustal movement in the region of Longmen Mountain, and the transfer from NWW to NW occurred in the direction of paleotectonic stress field. Due to exposure conditions, the predecessors focused more on the west and southwest of the basin or centered on the detached exposed profile in their studies, but conducted little systematic research on the overall information of gravel bed. Moreover, they kept different views about sedimentation sequence, cause and formation environment, etc.

Different scholars have put forth different models for the characteristics of late Cenozoic activity in the region (the eastern edge of the Qinghai-Tibet Plateau). Among them, the representative models include eastward escape model, right shear model and recently introduced lower crustal flow model. All these varying models have laid a theoretical foundation for our understanding about the tectonic activity in the region. Through all kinds of geological, landform, geophysical exploration and simulation techniques, the predecessors have thoroughly studied the times and characteristics of late Cenozoic Longmen Mountain fault belt activity, and accomplished a large number of research achievements. In addition, the Quaternary sedimentation of the Chengdu Basin has got more and more attention as it is taken as an important way to the study on the late Cenozoic tectonic activity of Longmen Mountain fault (Wang et al., 2013; Liang et al., 2014; Liu et al., 2015).

Based on the research for decades, the relatively integrated stratigraphic system has been established for the Quaternary of the basin. However, there are still few researches on the sedimentary environment and evolution of the Quaternary, the filling sequence of the basin and the coupling with the process of Longmen Mountain orogenesis. Especially, further study should be carried out with regard to the relations between the tectonic deformation at the eastern edge of the Qinghai-Tibet Plateau and the formational evolution of the Chengdu Basin since the Quaternary, as well as the impacts of plateau uplift on the paleogeographic, palaeoclimatic and living environment for human beings.