Abstract: ZnO thin films were deposited on sapphire substrate by mist chemical vapor deposition (mist-CVD) with different flow rate of carrier gas. This is a simple and low cost method for large-area deposition system. In this experiment, zinc chloride solution was used as sources, and the crystal growth was achieved at the growth temperature of 600°C and various flow rates of Nitrogen gas. The X-ray diffraction (XRD) spectrum was performed, and the photoluminescence spectra proved near-band-edge emission and strong deep-level emissions. In this work, we obtained the optimum condition for crystal growth of ZnO on m-plane sapphire, where XRD θ-2θ single peak at m-plane ZnO.

In recent times, II-VI semiconductor materials have been of great interest due to application for luminescence and ultraviolet (UV) optical devices such as light emitting diodes (LEDs) and laser diodes (LDs) [1]. Zinc Oxide (ZnO) has fascinated extensive consideration due to its greater physical properties and potential technological applications. The wide direct-bandgap of ZnO is 3.37eV and it has a large exciton binding energy of 60meV, which errands efficient excitonic emission processes at room temperature and enables devices to purpose at a low threshold voltage. ZnO (as a group-II oxide) proves enormous assure for applications in blue/UV light emitters and photodetectors, over and above transparent electronics, chemical sensors, spintronics, and varistors. Various techniques, such as magnetron sputtering, reactive evaporation, pulse laser deposition (PLD), metaorganic chemical vapor deposition (MOCVD), molecular bean epitaxy (MBE), spray pyrolysis, and sol-gel can be useful for ZnO thin films deposition [2].

We have developed a mist-CVD method as a promising technique that allows superior controllability in film deposition at low cost with an uncomplicated system and low energy consumption [3]. In this method, a 60ml of zinc chloride (zinc compound) solution is ultrasonically atomized to form mist particles of the solution, and the particles are afterward transferred by a carrier gas of nitrogen onto the heat sapphire substrate, forming ZnO film by pyrolysis and chemical reactions. The fundamental concept may be similar to that of spray pyrolysis, but the main difference is in particle volume and the merits of treating mist particles like nitrogen gas.

In this paper, we report that ZnO layers deposited on m-plane sapphire substrate by mist chemical vapor deposition (mist-CVD) with different flow rate of carrier gas at 600°Cexperiments. The optical and structural properties of un-doped ZnO layer are characterized by scanning electron microscopy (SEM), photoluminescence (PL), film thickness measurement and X-ray diffraction (XRD). Based on the results, it is confirmed that ZnO films have single orientation of crystal.

Fig.1 shows the experimental setup of mist-CVD system for crystal growth of undoped ZnO films were grown on m-plane sapphire with different flow rate of carrier gas. Deposition of ZnO thin films was carried at the substrate temperatures of 600°C with various gas flow rates of 6 L/min, 8 L/min and 10 L/min and 60 mL of zinc chloride solution. 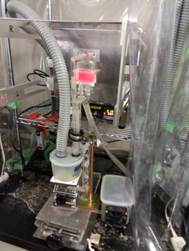 The photoluminescence spectra were verified by using He-Cd Laser which has an excitation wavelength of 325nm. After the thin film was etched by mixed solution of CH3COOH solution, phosphoric acid and pure water and the film thickness was measured by KLA-Tencor. The surface of film morphology was investigated with JEOL JSM7600F (SEM). The X-ray Diffraction (XRD) scan in the θ/2θ mode was performed to determine the film orientation perpendicular to the film surface.

The deposition condition for experiment is given in Table I.

Table I. Deposition Conditions for Experiment.

In order to characterize the optical properties of ZnO films deposited on m-plane sapphire, the PL measurements were performed at room temperature and the results are revealed in Fig.3. A weak near-band-edge (NBE) emission peak was observed at 3.26eV, while the deep level emission at 2.48eV which is related to oxygen vacancy [4-10]. 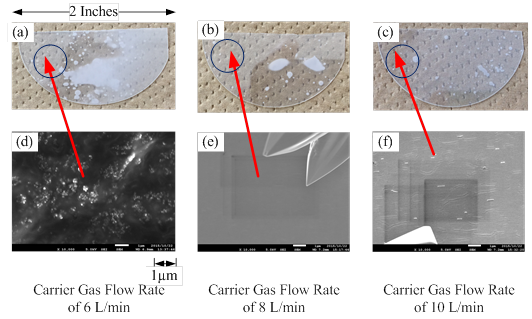 The film thickness results are shown in Fig.5. When the clod mist come into the furnace, then the temperature of the mist increase with the location on the substrate. So, the thickness increases with the location because the thermal reaction is enhanced by the mist temperature. When we increased the flow rate from 8 L/min to 10 L/min, the decomposition of the mist is decreased because the temperature of the mist is not increased at the high flow rate. According to these responses, the crystal growth condition for the sample grown with the carrier gas flow rate of 8 L/minis was found to be optimal. The summary table for experiment is given in Table II. 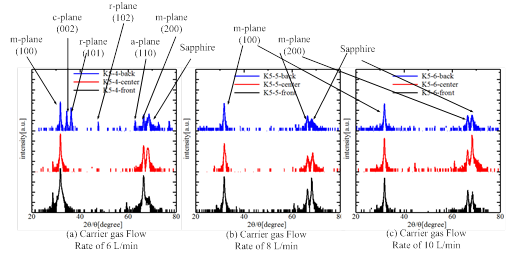 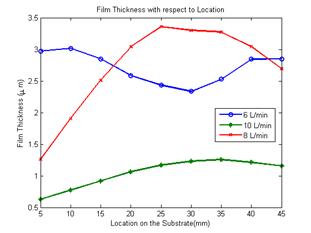 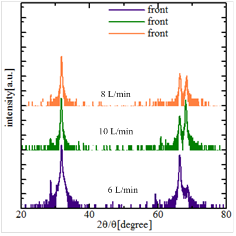 In this paper, undoped ZnO grown on sapphire by mist-CVD technique has been characterized. The undoped ZnO on m-plane sapphire was growth with different flow rate of carrier gas at 600°C. From the PL measurement, weak near-band-edge (NBE) emission peak was observed at 3.26eV while the deep level emissions were very strong. Film thickness decreased with the flow rate. According to this experiment, the optimum values for mist CVD techniques of undoped ZnO with m-plane sapphire are substrate temperature of 600 °C and the carrier gas flow rate of 8 L/min. In this work, we found the optimum condition for crystal growth of ZnO on m-plane sapphire and single orientation of m-plane ZnO was observed by XRD θ-2θ scanning mode.