Abstract: Purpose: In this study; we aimed to compare tumor volume with other prognostic determinants by making stereologic estimation. Material and Methods: In the mastectomy materials of 44 patients; tumor volume was calculated with the Cavaliery principle and compared with the classically known other pathologic variables. Results: There is a statistically significant correlation between histologic grade and tumor volume (p<0.05). Conclusion: It is concluded that one of the reliable parameters in the prognosis of breast cancer may be the estimation of tumor volume.

Breast carcinomas are the most commonly encountered tumours in women and rank first among the causes of death from cancer. The aetiology of breast cancer is known to be multifactorial and genetic predisposition, age and reproductive and hormonal effects are reported as major factors (1, 2). The histopathological typing and grading of breast carcinomas is performed in accordance with the 2003 tumour classification of the World Health Organisation (WHO) (3).

In current practice, several prognostic parameters are evaluated, including the histopathological type of the tumour. Prognostic parameters include tumour diameter, metastatic lymph nodes, lymphovascular (LV) invasion, histological grade (HG), nuclear grade, oestrogen and progesterone receptor levels, c-erbB2 immunoreactivity, perinodal invasion, and peritumoural lymphocytic response (4, 5). Among these, macroscopic diameter of tumours is regarded as an important prognostic criterion. Determination of the macroscopic tumour dimension is closest to the real dimension of prognostic importance. In the present study, stereology was used for the estimation of tumour volume (TV) (4).

Stereology is a method that provides information on the geometric and numeral features of three-dimensional viable and non-viable structures by utilizing their appearances on a two-dimensional platform (6-8, 20). The Cavalieri principle, which is a stereological volume estimation method, enables the determination of the volume of objects with imperfect shape (9, 10).

The present study was aimed at the stereological estimation of TV with the aid of prognostic parameters in breast tumours. Mastectomy materials of 44 patients constituted the material of the study. No correlation was determined between LV invasion, lymph node involvement and TV. On the other hand, it was ascertained that HG and TV were significantly correlated with each other.

In conclusion, it is considered that the measurement of TV is of prognostic value in breast tumours.

The present study was conducted on 44 cases diagnosed with breast cancer between the years 2007 - 2009, which were treated with modified radical mastectomy and dissection of the axillary lymph node (ALN). The mastectomy materials of the patients included in the study were fixed in 10% buffered formaldehyde for 24 hours (Figure 1), and the Cavalieri principle was applied for the estimation of TV. When applying the Cavalieri method, on the rear surface, each mastectomy material was cut into equal and parallel 1cm thick sections (Figure 1). These sections were placed side-by-side without altering the sequencing for the superimposition of the point grid (Figure 2). A common point counting grid with 1 cm distance between test points was used for the estimation of the volume of the tumour. The grid system was superimposed, covering the sectioned surface area, and the circled points were counted (Figure 3). 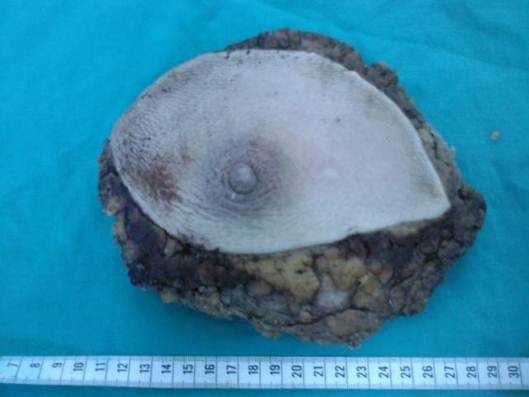 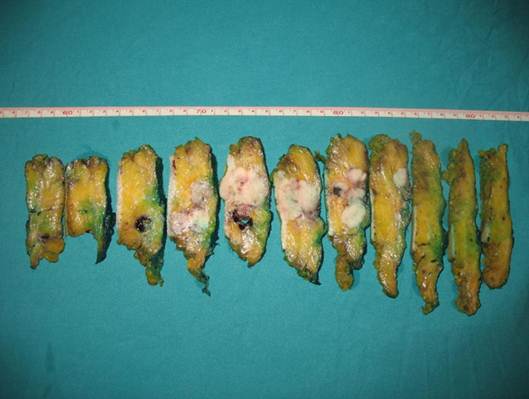 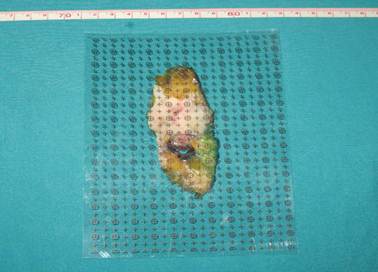 Figure 3. Superimposition of a transparent point grid for the counting of the circled points hitting the section.

The total volume was calculated by placing the total number of points and other measurement criteria in a formula frequently used in Cavalieri estimations. The mathematical equation used is given below:

V: Volume of the section of interest

P: Number of points counted in the cross-sectional area

a/p: The actual area represented by each point.

In the present study, the number of points counted in the cross-sectional area was placed together with the t (mean section thickness) and a/p (actual area represented by each point) parameters in the above formula to calculate the TV for each case.

To exemplify, for a neoplastic area with a P value of 3 the volume was calculated as follows:

In cases where the neoplastic area involved more than one section, the number of circled points hitting each section was counted and the counts of each section were added to obtain a total number of points. The sum was used in the formula given below for the calculation of the TV.

To exemplify, for neoplastic areas with P1, P2 and P3 values of 2, 5, and 3, respectively, the tumour volume was calculated as shown below:

Following the macroscopic measurement of TV, macroscopic sampling was performed for microscopic examination. The preparations prepared by routine processing, embedding, cutting of sections and staining with Hematoxylin-Eosin (H&E) were assessed by two different pathologists for classical prognostic parameters.

Correlation of the Size of the Tumour with other Prognostic Parameters:

As regards the correlation between tumour localisation and TV, it was observed in the 44 cases that the tumours located in the upper-outer quadrant, mid-quadrant and all four quadrants were macroscopically larger in volume. The correlation between these two parameters was statistically significant (P < 0.001). However, no statistically significant correlation existed between the largest tumour diameter and the location of the tumour (P = 0.340).

The assessment of the correlation between the histopathological type of the tumour and the location of the tumour in the right- left breast showed that 92% of the IDC cases were located in the left breast, which was of statistical significance (P = 0.49).

Assessment of the correlation between the total TV and HG demonstrated that the TV of cases with a HG of 3 was larger. This correlation was found to be statistically significant (P = 0.029). However, the largest tumour diameter was not significantly correlated with HG (P = 0.188).

Based on all these data, it is considered that stereological volume estimation using the Cavalieri principle is a simple, practical and readily applicable method, which is more reliable than largest tumour diameter in assessing the prognosis of breast tumours.

Major prognostic factors of breast cancer, which are based on multiple clinical and pathological features, and have effect on both treatment results and the biological behaviour of the patient, include tumour diameter, histopathological type of tumour, presence of ALN metastasis and number of metastases, HG, presence of oestrogen and progesterone receptor proteins, and c-erb B2 immunoreactivity (2, 4). According to the latest breast cancer classification of the WHO published in 2003, the most frequently observed type of breast cancer is IDC (75%) (3), and it has been reported that this type of cancer is observed slightly greater in the left breast compared to the right breast (approximately 1.07 / 1) with 40 - 50% of the cases located in the upper outer quadrant (2).

Among the cases investigated in the present study, there were 4 cases with multiple macroscopic nodules, 1 with multicentric and 3 with multifocal localisation. No statistically significant correlation was determined to exist between total volume measurements and ALN metastasis (P = 0.692).

Ahmad et al. (12), in a study conducted on 120 mastectomy materials dissected together with their axillary lymph nodes, aimed to score breast carcinomas based on HG, measurement of tumour size, determination of the status of ALN, staging and Nottingham prognostic index scoring. Accordingly, of the 120 cases, 5, 91, and 24 were determined to be of grades 1, 2, and 3 respectively. It was ascertained that, most of the cases of a higher HG were T2 or T3 and displayed an increased number of metastatic lymph nodes.

HG has been investigated in various studies as a prognostic factor of breast carcinomas. In mastectomized patients with higher HG, metastasis to 4 or more lymph nodes, systemic recurrences and death from metastatic disease were observed more frequently in comparison to patients with lower HG (13, 14).

In another study, Westenend et al. grouped 100 cases as those with and without distant metastasis such that each of the two groups comprised of 50 patients, and found out that vascular invasion and tumour diameter were both closely related to metastatic potential and prognosis (15).

In a study conducted by Tezuka et al. on 132 cases with breast tumour, the lymphovascular epithelium was immunohistochemically stained with the D2-40 antibody, and vascular invasion was assessed after the application of staining with H&E and D2-40. Based on the results obtained with both staining methods, the researchers reported that LV invasion, lymph node metastasis and local recurrence were all closely related to each other (16).

In a similar study conducted by Silverstein et al., it was determined that tumours with smaller diameter displayed metastasis at a rate of 3%, whilst in tumours with a diameter greater than 51 mm, the rate of lymph node metastasis increased by 60% (18).

Akbaş et al. measured the volumes of axial and coronal MR sections and 9 breast prostheses using the Cavalieri principle. Based on the results they obtained, the researchers reported that the volume of breast prostheses could be measured without altering routine procedures and by making use of this rapid, simple, accurate and practical technique (10).

Altunkaynak et al. calculated by two different methods with the brain volumes of 10 Sprague Dawley rats. First, all brain slices scanned with a scanner and their images shown on PC monitor and brain volume calculated on these images. Second, all brain slices photographed in 10x magnification with a microscope camera, and brain volumes estimated based on these micrographs. There was no statistically difference between to techniques (P > 0.05). This study demonstrates that personel computer scaning of serial tissue sections allows for easy and reliable volume determination based on Cavalieri method (19).

In the present study, after the mastectomy materials entered the macroscopy laboratory, no alteration was made in routine procedures. Each material was cut into 1 cm - thick slices with an aim of using a common point counting grid to estimate the TV. The grid system was superimposed, covering the sectioned surface area, and the circled points were counted. As the distance between the test points in the counting grid was 1 cm and the sections were of a thickness of 1 cm, TV calculations could be made practically within a short period of time, using the relevant formula.

Furthermore, although largest tumour diameter may be of value in spheroidal lesions, it proves to be insufficient in linearly growing lesions. However, TV is considered as a realistic parameter representative of the neoplastic mass.

In the present study, it was considered that, in breast tumours, macroscopic volume could be used as an indicative parameter for prognosis and lifetime expectancy.