Evaluation of Several Drought Tolerance Criteria in Cultivated Varieties of Barley (Hordeum vulgare L.) and Their Relationships with Yield Reduction

Abstract: Drought is the most significant constraint for crop production in the world. Therefore, employing high-yielding cultivars tolerant to drought is an effective approach to reduce its detrimental effects. Six barley cultivars were evaluated to screening drought tolerant cultivars in two different conditions of irrigation. The experiments were arranged based on randomized complete block design with three replications at the research station of College of Agriculture, Shiraz University, Shiraz, Iran. The cultivars in the first experiment meet normal irrigation condition (100% field capacity; FC) while these cultivars in the second experiment were exposed to water-stressed condition (no irrigation after anthesis). Grain yield, its components and drought tolerance indices based on grain yield of the genotypes such as Tolerance (TOL), Mean Productivity (MP), Susceptibility Index (SI), Stress Susceptibility Index (SSI), Geometric Mean Productivity (GMP) and Stress Tolerance Index (STI) were calculated. Analysis of variance showed highly significant differences among the barley cultivars for yield and its components in normal and stress conditions. Yield in non-stress (Yp) and stress (Ys) conditions showed positive and significant correlations with STI, MP and GMP. PCA analysis also indicated that STI, MP and GMP were more reliable indices to screen drought tolerant barley cultivars. The results revealed that Lokht-Himalia and Dorla were sensitive and semi-sensitive, respectively. Other evaluated barley cultivars were tolerant to drought. Therefore, they may be recommended for cultivate in drought prone regions. Also these cultivars can be used in barley breeding programs aimed at improving drought tolerance.

Barley is one of the most important cereal crops worldwide. It has been cultivated in many parts of the world due to its resistance under adverse environments, such as limited moisture and saline conditions [1]. To evaluate the yield potential and to identify stable and resistant barley cultivars it is needed to consider and screen them in different climatic conditions, low rainfall and inappropriate distribution.

Environmental stresses, especially drought as one of the most major limiting factors, can decrease agricultural production in the world [2]. Plants response against water deficit stress are confounded by several factors such as time, intensity, duration and frequency of stress as well as by plant, soil and climate interactions [3] that based on these cases, morphological, physiological and metabolic changes were performed in all their plants organs [3]. Therefore, selection and development of drought tolerant cultivars is great priority to reduce the adverse effects of drought for more consistent levels of crop production. Breeding for yield improvement under water limited conditions is a more complicated scenario than that of under stress-free conditions [4,5]. One of the most common ways to evaluating these cultivars is using of drought tolerance indices based on its grain yield. These indices are either based on drought tolerance or sensitivity of cultivars [6]. Alternatively, some breeders have employed statistical parameters to compare grain yield changes under stress and non-stress conditions for the selection of tolerant cultivars [7]. Reference [7] introduced tolerance index (TOL), the yield difference between non-stress (Yp) and stress (Ys) environments, and mean productivity (MP) as the average of Yp and Ys. Based on these indices, genotypes with high MP and low TOL are favored. By suggesting the stress susceptibility index (SSI), Reference [8] showed that genotypes with SSI less than one were tolerant. Reference [6] defined the stress tolerance index (STI) as an advanced index to identify high-yielding genotypes under stress and non-stress conditions based on Yp, Ys and

p (average of total Yp). Alternatively, he suggested the geometric mean productivity (GMP) as another STI which is estimated using the square root of the sum of Yp and Ys. These drought tolerance indices are analyzed by different multivariate statistical approaches to obtain more precise selection indicators for drought tolerance. Significant variation has been found between barley cultivars in terms of response to drought stress [9] and to release the new barley cultivars, it is essential to evaluate their response to water deficit stress, particularly when they are introduced to the regions with limited water resources. The present study was aimed to assess drought tolerance in six barley cultivars using the yield, its components and yield-based indices for breeding programmes.

To evaluate effects of drought stress on grain yield, six barley cultivars were evaluated on a silty loam soil at the research station of College of Agriculture, Shiraz University (1810 m above mean sea level with longitude 52°32´ E and latitude 29°36´ N), Iran under field condition. Six barley cultivars (Karoon Kavir, Lokht Hymalia, Reyhan, Dorla, Valfajr and Karoon) were compared using a randomized complete block design with three replications in two different irrigation conditions (two different experiments). The cultivars in the first experiment meet normal irrigation condition (100% field capacity; FC) while these cultivars in the second experiment were exposed to water-stressed condition (no irrigation after anthesis). Barley cultivars were planted in plots with an area of 10 square meter. Each plot consisted of 8 rows, 5 m long with 25 cm apart. The cultivars were planted with density of 250 seeds m−2. Weather data at the experimental site are given in Table 1.

s are their overall mean of grain yield under stress and non-stress conditions, respectively.

Statistical analyses were performed using SAS 9.3 [10] softwares and means were compared using Duncan’s multiple range test at 5% probability level. Correlation coefficients were calculated to find out the relationships among the indices and the grain yield under both conditions. Based on Principal component analysis, biplot diagram was depicted to identify the high yielding drought tolerant barley cultivars graphically.

Table 1. Some weather parameters of the experimental site during the 2000-2001 growing season.

3.1. Comparison of the Cultivars Yield and Yield Based Indices

Analysis of variance showed that there is a significant difference among the barley cultivars related to grain yield in stress and normal irrigation conditions (Table 2). The highest value of TOL, 294.4 gm2 and SSI, 1.07 was belonged to Kavir. The high values of SSI and TOL show sensitivity to drought stress. Therefore low values of SSI and TOL are important to select high-yielding cultivars under stress condition [7]. Based on these two indices, Kavir and Reyhan had the lowest SSI and TOL indices, respectively (Table 2). Reyhan is considered as a non-tolerant cultivar by the farmers in Iran country. The MP index introduces relatively high-yielding cultivars in non-stress conditions, but low-yielding ones under stress condition. This index is associated with STI, GMP and HM indices and cannot be suitable alone. Hymalia (naked seed) was located in specific group and was the most sensitive one. Dorla was introduced as semi-sensitive one in comparison to cultivars based on STI index. This shows higher efficiency of this index in selecting and grouping cultivars (Table 2).

Based on GMP and HM indices (Figure 1-c), cultivars divided to sensitive and resistant groups so that Karoon and Reyhan ranked first and second, respectively in resistant group. Up or down trends of grain yield of cultivars in terms of STI index was similar to GMP. Based on STI index, Hymalia had the lowest value of drought tolerance indices and located in a separate group (figure 1-d). Dorla was classified as a semi-resistant one while it was introduced as a resistant one by other indices and it appeared the efficiency of STI index in comparison to other indices in the differentiation of group A from group B. Hence, cultivars with high values of STI also showed high GMP and HM indices and low values of SSI and TOL while genotypes with low STI showed low values of GMP, MP and HM but associated with high values of SSI and TOL. Therefore, selection based on STI may result in high-yielding tolerant ones (Fernandez 1992). Other researches have also used different indices for selecting tolerant cultivars. For example, reference [22] reported that selection based on a combination of SSI and GMP is more efficient for improving drought tolerance in common bean. Reference [9] selected high yielding corn hybrids based on STI and GMP indices under both stress and non-stress conditions. Reference [23] screened drought tolerant wheat varieties by high values of MP, GMP, STI and low values of SSI under both 100% and 25% field capacity conditions and concluded that the cultivar Hashim-8 was drought tolerant. 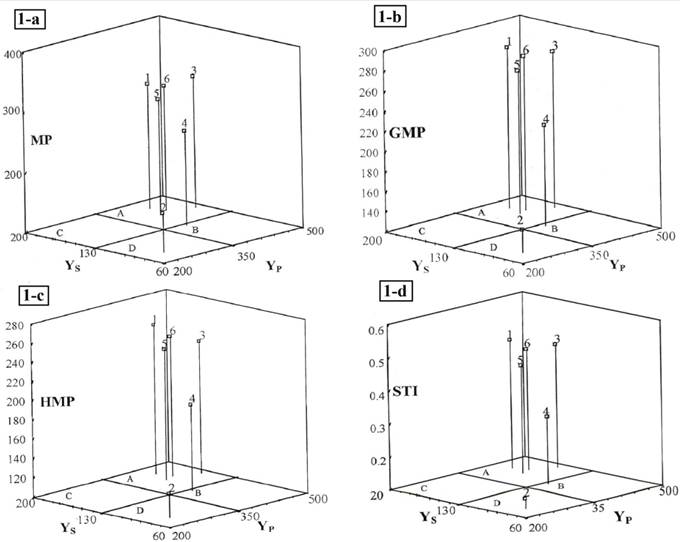 3.4. Regression Model of Grain Yield with Yield Components Under Both Stress and Non-stress Conditions

0.05), the most important independent variables were determined and the following equations were presented, while Yp and Ys are grain yield under non-stress and stress conditions, respectively:

) and their T value and significant levels related to grain yield as dependent variable under stress and non-stress conditions using stepwise regression.

3.5. Regression Model of STI Index with Yield and Yield Components Under Both Stress and Non-stress Conditions

After correlation analysis, STI was determined as one of the best index to screen drought tolerant cultivars. Also, regression model of grain yield showed that biological yield, harvest index and spike length were entered to equations and explained high value of total variation in grain yield. Based on these results, regression model (stepwise) of STI index as dependent variable with yield and yield components as independent variables, was formed under both stress and non-stress conditions as below:

), T value and significant levels in stress and non-stress conditions by stepwise regression were shown in Table 5. Under non-stress condition biological yield could explain 95.6% of total variation, while, fertile tillers and plant height under stress condition reflected 99.8% of total variation of STI, and other components had insignificant effect on drought tolerant indices. Therefore, those components should be entered to regression equations in breeding programmes that leads to yield increase and drought tolerance. Reference [25] found that barley genotypes significantly differed in plant height, harvest index, biological yield and grain yield. They added that it was possible to identify some barley genotypes that could survive under stress conditions. Hence, regression models of drought tolerance can be used to select stable cultivars in different situations.

Introducing high-yielding drought-tolerant cultivars with early maturity is one of the efficient ways to minimize the effects of drought, which lead to yield loss by reducing TKW, and if accompanied with high temperatures after anthesis, hastens whole plant senescence and reduces biological yield and HI in combination, with other water management methods. This study evaluated the level of drought tolerance in six barley cultivars Correlation coefficients revealed that STI, MP, HN and GMP were the most reliable yield-based indices for screening drought tolerant barley cultivars. Among the cultivars, Reyhan, Karoon, Valfajr and Karoon Kavir were known as drought tolerant ones, Dorla and Hymalia were known as semi sensitive and sensitive ones, respectively. Therefore, it can be concluded that breeders can cross the most sensitive and tolerant ones with maximum genetic distance in terms of drought tolerance in breeding programmes aimed at improving drought tolerance in barley. If they consistently show such tolerance over multiple trials, these cultivars may be introduced to cultivate in drought prone regions.