Abstract: Salinity problem with its vast spread on the earth is one of the main factors which limits crop production. One of the methods to overcome this problem is taking advantage of the resistant genotypes. Investigation of changes resulting from the stress in an electrophoretic profile of proteins and understanding its relation with the tolerance and susceptibility of cultivars is an important criterion for identifying such cultivars. In this study, 4 wheat cultivars with different degrees of tolerance were grown in hydroponic culture under salinity treatment (0, 70, 140 and 210 mM NaCl). Leaf sampling was done on 5 leaf stage. Studying the electrophoretic pattern of the leaf soluble proteins in salinity and control treatments showed fundamental similarities among the cultivars. No polypeptide bands belonging to the specific cultivars or to one of the salinity treatments were observed. The study of protein changes by electrophoretic analysis under salinity treatment may be useful for understanding the salinity tolerance of genotypes.

Salinity is one of the most destructive abiotic stresses that constraint crop production and growth in many parts of the world [1]. Salinity has adverse effects to most crops. Mainly the negative effects of salinity are due to increase in Na+ and Cl– ions in different plants. Salinity at higher levels has different adverse effects. It causes membrane damage, nutrient imbalance, altered levels of growth regulators, enzymatic inhibition and metabolic malfunction, including photosynthesis which ultimately leads to plant death [9]. One way to resolve these problems is improvement of crops that are more tolerant to salinity stress. But mechanisms of salt tolerance, do not completely clear. Salt tolerance is a polygenic trait [5]. One of the most important character for salt tolerance is low level of Na+ and Cl– ions absorb and transition to the leaves [12].

The vast genetic diversity present in different genera and species of plants for salt tolerance [4]. Most crops are salt sensitive or hypersensitive plants (glycophytes) in contrast to halophytes, which are able to growth and development in salt land. Wheat is a glycophyte plant that has moderate tolerance to salinity. Its tolerance threshold to salinity is about 6 dSm-1 and in soils with 7-14 dsm-1 able to growth however decrease its yield. Total result shows that under salinity treatments in sensitive lines accumulation of Na+ is higher than tolerance lines. It seems well partitioning of toxic ions, especially Na+is one of the resistance mechanisms to salinity. Wheat has different species with different degrees of tolerance to salinity. Bread wheat (Triticumaestivum L.) is a hexaploid species that has high K+/Na+ discrimination in contrast to tetraploid wheat. This character is related to D genome of A. tauschii [7]. Variation in Na+ and Cl– partitioning occurs between and even within varieties [14]. One of the ways to combat salinity, is use of resistant genotypes. Whereas the direct selection of resistant genotypes only possible in salt area, breeders effort to gain criteria for detection of these varieties. One of these criteria is study of alteration at proteins electrophoretic pattern in response to stress and discover the relation of them with the tolerance and susceptibility of cultivars. Bressan et al. (1987) with study on protein synthesis at rice roots under salinity stress observed at least to proteins with 25 and 27 kD molecular weight in rice roots under stress that did not exist in control treatment. The objective of this research was study of proteins changes in different cultivars in response to salinity.

Changes of protein levels impress the tolerance of plants to salt stress. The result of salt stress is reducing or increasing of protein expression or disappearing of some proteins [15]. In many plants under salinity Special changes in protein profiles has been showed and a lot of proteins that have prominent role in response to salinity, determined [6].

In this study 4 wheat genotypes consist of Kavir, Mahdavi (as tolerant cultivars) and Inia, HYS (as non-tolerant cultivar) from Iran seed and plant improvement institute were compared.

100 seeds of each 4 genotypes were surface sterilized by 3% sodium hypochlorite solution for 5 min, and rinsed 3 times with distilled water. For uniformity in germination the seeds were placed in Petri dishes at 20°C for 48 h in the dark condition. Germinated seeds were transplanted into tubes filled with vermiculite. After one week, 2 leaf seedlings fixed into polystyrene blocks and suspended in hydroculture tanks. These tanks possessed Hogland nutrient resource. The experiment was carried out in a heated glasshouse (20-25°C) with supplementary lighting provided by 10000 lux phytotron for 16 h daily. Salt (NaCl) treatment was added to the nutrient solution at 3 leaf stage, in increments of 35 mol m-3 every other dayin form of gradual until the final concentration of 0 (control), 70, 140 and 210 mol m-3 were reached. Leaf sampling was done at 5 leaf stage. Samples frozen in liquid N2 immediately and stored at - 80°C.

For isolation of soluble and insoluble proteins, leaf tissue was ground to powder using a mortar and pestle with extraction buffer containing Tris-HCl 25 mM, pH 7.5, KCl 150 mM, 20% glycerol (v/v) and DTT 1 mM with ratio of 4: 1 (tissue: extraction buffer), until homogenate extract was prepared. The homogenate centrifuged at 14000 rpm for 15 min at 4°C. Then over supernatant separate as soluble proteins. Insoluble proteins were extracted from under sediment with the method described by Nato et al. (1995). Proteins stored at –20°C for further analysis. The protein concentration of the samples was quantified using the Bradford method (1976).

Separation of soluble and insoluble protein sub-units was done with SDS-PAGE electrophoresis. The leaf protein extracts was mixed with buffer containing 0.3 g Tris-HCl (pH6.8), 0.92 g SDS, 2 ml β-mercaptoethanol, 4 g glycerol and 2 ml bromophenol blue (0.1%) and then heated at 100°C for 3 min. Supernatant was stored at –20°C for later analysis. About 30 µg of proteins were separated as polypeptides, by 10% SDS-polyacrylamide gel electrophoresis (SDS-PAGE). In each gels, Bio-Rad low molecular weight marker was used for detection of bands molecular weight. Gels were stained with the solution of 0.25 gcoomassie brilliant blue R-250, 125 ml methanol, 25 ml glacial acetic acid and 100 ml distilled water for 24-48 h, and then distained in the solution containing 100 ml methanol, 100 ml glacial acetic acid and 800 ml distilled water. The gels were then scanned and quantitative amounts of the bands was determined by densitometry.

The qualitative data was generated based on the presence (1) or absence (0) of each band. The cluster analysis of genotypes was done on the basis of quantitative and qualitative data of protein bands and by using similarity matrix and by UPGMA method with SPSS v16.0 software.

The leaf soluble proteins SDS-PAGE profile of different genotypes is shown in Fig. 1 (for Kavir and Inia cultivar) and 2 (for Mahdavi and HYS cultivar). 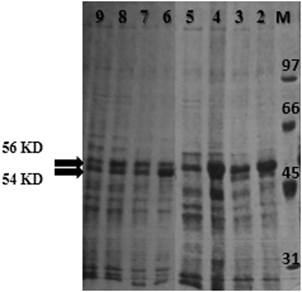 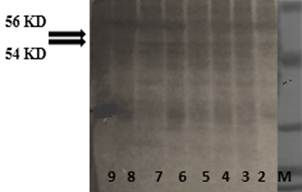 In total 16-19 polypeptides band observed. Studying the electrophoretic pattern of the leaf soluble proteins in salinity and control treatments showed fundamental similarities among the cultivars. No polypeptides belonging to the specific cultivars or to one of the salinity treatments were observed. But in all cultivars between different salinity and control treatments, qualitative and quantitative changes at 2 bands with 54 and 56 kDa molecular weight were identified. In other bands, little alteration consists of increase or decrease in accumulation amount of polypeptides observed. According to densitometric analysis, density of the polypeptide band with 54 kDa decreased at high salinity in total genotypes. Also the accumulation of band with 56 kDa decreased in total cultivars except Inia at 210 mM salinity.

Cluster analysis of leaf soluble proteins with quantitative data was performed on the results of densitometric analysis to find out further information about soluble protein changes in different cultivars on salinity treatment. A dendrogram based on linkage distance (Euclidean distances) was generated from the results of densitometric analysis (Fig. 3). The diagram for all cultivars in total treatment showed clustering of the cultivars in 2 groups. One group containing the Kavir genotype and another group had other cultivars. The shortest distance was between HYS and Inia (non-tolerant genotypes) and also between Mahdavi and Inia cultivars. The longest distance was between Kavir and Inia (tolerant and non-tolerant cultivars).

Also cluster analysis of qualitative data from SDS-PAGE was done for all treatment (Fig. 4). Based on the diagram of cluster analysis, cultivars were separated to 2 groups. The first group was belonged to Mahdavi and Kavir cultivars and second group was corresponded to the HYS and Inia cultivars.

Fig. 3. Dendrogram based on linkage distance from the results of densitometric analysis M: Mahdavi, I: Inia, H: HYS, K: Kavir.

Fig. 4. Dendrogram of leaf soluble proteins qualitative data from the SDS-PAGE at all treatment based on UPGMA method. H: HYS, I: Inia, M: Mahdavi, K: Kavir. 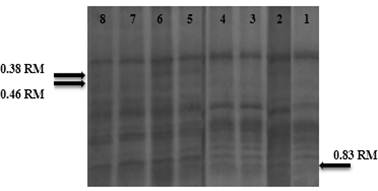 Unlike previous grouping of cultivars (tolerant and non-tolerant), the study showed that, the differences between cultivars at seedling stage was not match to this grouping. The growth of all cultivars decreased under salinity stress and with increase of salinity this decrease in growth was higher. However this decline in growth was not the same for all cultivars. The most reduction in growth was detected in HYS (non-tolerant). In Kavir and Mahdavi (tolerant) the growth of seedlings decreased at salinity treatment, however this reduction in growh was not very much. Reduction in growth of Inia was almost close to Kavir and Mahdavi. According to the result of leaf soluble protein SDS-PAGE analysis, salt stress caused an increase in quantitative changes of polypeptide bands rather than qualitative changes. In this study intensity of polypeptide band with 0.83 RM in Kavir increased after salinity. Since Kavir is a tolerant cultivar, it seems this increase in intensity of this band is a defense response to salinity. But accumulation of this polypeptide band decreased in Inia which is a non-tolerant cultivar.

This result is agreement with Huarkman et al. (1988), who studied changes of protein patterns in barley roots under salinity and observed no specific polypeptide bands belonging to salinity stress. They also reported decrease or accumulation of such polypeptides.

Concentration of 54 and 56 KDa polypeptide bands at high salinity, especially 210 mM reduced for all cultivars. One of the main enzymes in plant photosynthesis, is rubisco enzyme which evolves 50 percent of leaf proteins. This protein is formed from different small and large subunits. Studies showed this two polypeptide bands are related to rubisco enzymes. According to the result of different studies, abiotic stresses have adverse effect on rubisco enzyme activity. These effects consist of reduction in synthesis or activity of subunits, destruction of them and ultimately reduce of photosynthesis activity [11]. Maslenkova et al. (1992) with study of barley seedlings under salinity stress observed that increasing of salinity caused strongly reduction in the level of 55 KDa polypeptide band which is related to the rubisco enzyme.

In the study, it seems that these changes in all cultivars are one of the plant reactions. Since the reaction process in cultivars is different, it can be concluded that this differences is probably related to their genetic and variability of each cultivar toward salinity. Cluster analysis results indicated that under stress condition, tolerance or susceptibility is more under influence of banding profile rather than bands accumulation.

Cluster analysis of genotypes for qualitative data showed, 2 separated groups: Kavir and Mahdavi (tolerant cultivars) and the other, Inia and HYS (non-tolerant). According to this result, protein profile was different in tolerantand non-tolerant groups. For insoluble leaf proteins, no specific pattern for changes in amount of proteins was revealed.

Overall, for improved in breeding and genetic engineering of salinity tolerance in crops, elucidating the molecular basis of salt tolerance is important. Distinguish of differences and similarity between different genotypes will be helpful in elucidating the molecular basis of salt tolerance. Study of protein changes by electrophoretic analysis under salinity treatment may be useful for understanding the salinity tolerance of genotypes. By contrasting cultivars under controlled and salinity stress, may be identified proteins associated with salt stress.