Numerical Simulations of Current and Wave Around a Circular Cylinder

Abstract: This paper presents numerical simulations of a circular cylinder under the action of current or wave only. The model solves the three-dimensional (3D) Reynolds-averaged Navier-Stokes equations using an explicit projection method. The 3D grid system is made of lots of prisms, which are built from a two-dimensional horizontal triangular grid by adding a number of horizontal layers. A non-linear k-ε model, which can take into account the anisotropy of turbulence is incorporated as a turbulence model. Two test cases including the current flows around and regular waves interact with a circular cylinder are used to demonstrate the capability of the model. The model gives reasonable results in comparison with available experimental data.

To date, many numerical predictions have been performed to study the interaction between a current and a cylinder. For example, Onget al. (2009) investigated high Reynolds number flows around a smooth circular cylinder [10] using 2D unsteady Reynolds-averaged Navier-Stokes equations with a standard high Reynolds number k-ε turbulence model. Salih Kirkgoz et al. (2009) presented numerical simulations of 2D turbulent flow around a smooth horizontal circular cylinder near a rigid bed with gap ratio G/D=0.3 [12]. The Ansys 10.0-FLOTRAN program package is used to solve the governing equations by FEM, and the performance of different turbulence models are examined. For the study of the interaction between wave and a cylinder, there are also many numerical models. Boussinesq equation models are depth-averaged two-dimensional (2D) models and have been extensively used for the study of wave-induced run-up and forces on cylinders (Li et al., 1999[6]; Li and Zhan, 2001 [4]; Zhao et al., 2007 [15]; Zhong and Wang, 2009 [17]). In addition, potential flow models are the other class of widely-used numerical models. For example, Ma et al. (2001a, 2001b) developed a fully nonlinear finite element model for simulating the interactions between fixed vertical cylinders and steep waves [8, 9]. Wang and Wu (2010) studied the nonlinear interactions between water waves and vertical cylinder arrays in a finite-element based numerical tank [14]. However, although considerable numerical models have been applied to study current or wave interacting with a cylinder, it is very rare that a numerical model has the capability of simultaneously predicting a current interacting with a cylinder and the interaction between wave and a cylinder.

In this paper, we proposed a 3D numerical model to predict flows around a circular cylinder under the action of current or wave only. The model is developed based upon a former model (Ai and Jin, 2010 [1]), which has been successfully applied to study solitary waves interacting with structures. A non-linear k-ε model is adopted in the model as a turbulence model.

The governing equations are the 3D Reynolds-averaged Navier-Stokes (RANS) equations, which are based on the conservation of mass and momentum and can be expressed as:

are the time-averaged velocity components;

are the turbulent velocity components;

is the spatial coordinate;

is the normalized pressure divided by a constant reference density; and

are the gravitational accelerations.

is the molecular kinematic viscosity;

is the averaged turbulent energy and

in Eqs. (2), (4) and (5) are evaluated by the following non-linear expression instead of the linear equation used in the standard

The coefficients in Eqs. (6) and (7) are expressed as follows:

Boundary conditions are required at all the boundaries of a three-dimensional domain including the free surface and the bottom. At the moving free surface

, the kinematic boundary condition is

For the impermeable bottom surface

, the kinematic bottom boundary condition is

Using kinematic boundary conditions (18) and (20) in the integrated form of the continuity equation (1) over the water column, the free surface equation is obtained:

At rigid wall boundaries, velocity normal to the wall is zero and the tangential velocity is determined by the wall-function approach. In this study, only smooth rigid walls are considered, so velocity parallel to the wall is described by the following logarithmic law:

is velocity parallel to the smooth wall;

is the shear velocity; and

is the normal distance from the wall.

At the free surface, the boundary conditions for turbulent quantities are

is the water depth.

At the rigid walls, the following boundary conditions for turbulent quantities are specified.

At inflow boundaries, the velocity normal to the boundary and turbulent quantities are specified as follows:

The overall numerical algorithm consists of the following three steps.

The first step is to solve the RANS by using an explicit projection method, which is subdivided into two stages (Ai et al., 2011 [2]).

In the second stage, the new velocities are computed by correcting the projected values after including the non-hydrostatic pressure terms, which are obtained by solving the discretized Poisson equation. It is worth mentioning that, because of a new grid arrangement employed in the present model, the Poisson equation is symmetric and positive definite and thus can be solved efficiently by preconditioned conjugated gradient method. In this study, the symmetric Gauss-Seidel method is used as the preconditioner to solve the Poisson equation.

In the second step, by substituting the resulting velocities into a discretized form of the free surface equation (21), we can obtain the new free surface elevation.

Finally, we employed finite volume method to discretize the Eqs. (4) and (5) to get the turbulence quantities.

5.1. The Flow Around a Vertical Circular Cylinder Exposed to a Steady Current

In order to examine the capability of the model to simulate a current interacting with a circular cylinder, the model validation was achieved against the experimental data obtained by Roulund et al. (2005) [14] in the first test case, which has been validated by Zhang Bojie et al. (2015) [16]. The experiment was conducted in a flume with 35 m long and 3 m wide. The water depth was maintained at 0.54 m. The cylinder diameter was

= 0.536 m. A schematic diagram is plotted in Fig. 1. In the simulation, a constant inflow velocity of 0.326 m/s was imposed at the upstream boundary. To discretize the computational domain, 16964 horizontal triangular grids and 40 vertical layers are chosen. The horizontal grid spacing is equal to 0.0234 m around the cylinder surface and increases gradually in the radial direction. 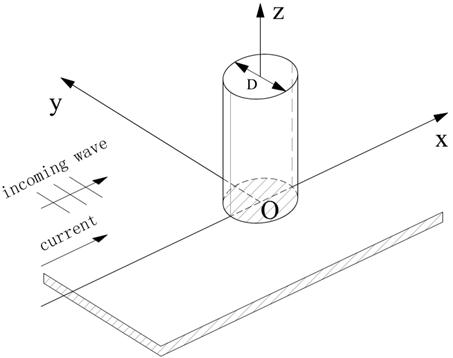 Fig. 1. A schematic diagram of current or wave interacting with a circular cylinder. 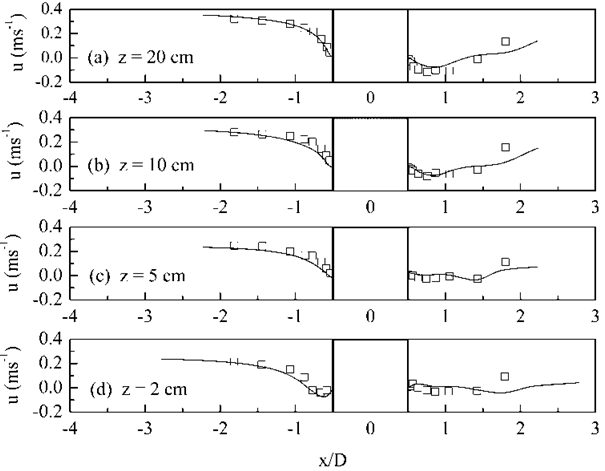 Fig. 2. Comparison between the computed and measured horizontal velocity in the plane of symmetry at different distances from the bed. 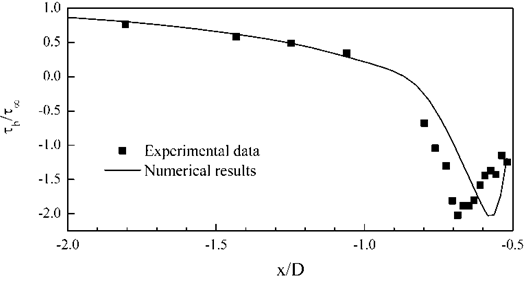 Fig. 3. Comparison of the bed shear stress along the x- axis between model results and the experimental data. 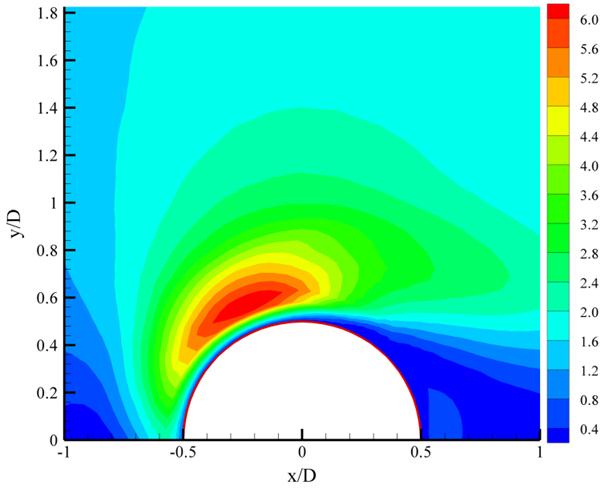 Fig. 4. Comparison of the amplification of the bed shear stress between the numerical results and the experimental data.

and the measurements is also reasonable. The maximum value of the bed shear stress is larger than 6.5 and the position of it is near the cylinder surface and located in the radial direction of

is measured clockwise from the x-axis through the center of the cylinder.

5.2. Bed Shear Stress in Front of a Cylinder Exposed to Waves

In the second test case, to examine the capability of the model to simulate waves interacting with a circular cylinder, the computed bed shear stress was compared with the experimental data obtained by Sumer et al. (2005) [13]. The numerical simulations were conducted in a wave tank with 30 m long and 0.6 m width. A schematic diagram also can be referred to as Fig. 1. 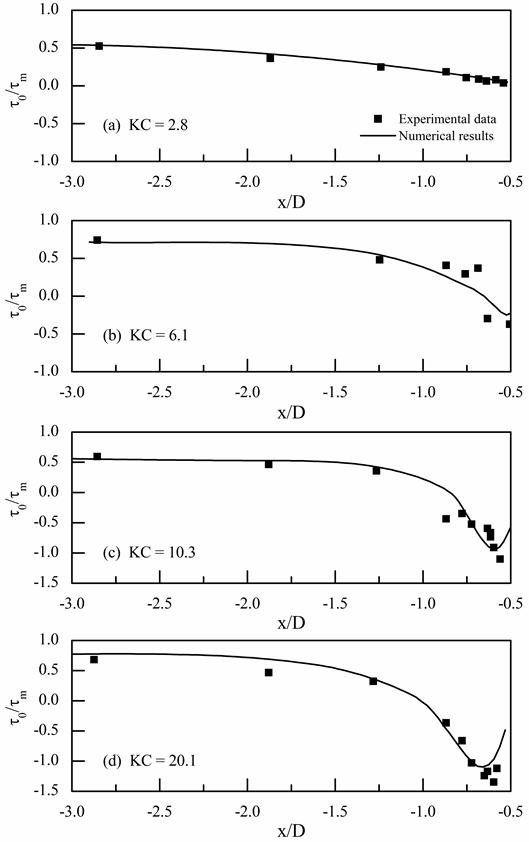 Fig. 5. Comparison of the bed shear stress in front of the cylinder between model results and experimental data.

The cylinder diameter was D= 0.04 m. The computational domain is also discretized by horizontal triangular grids plus 40 vertical layers. The horizontal grid spacing is equal to 0.0017 m around the cylinder surface. The incoming regular waves with KC number = 2.8, 6.1, 10.3 and 20.1 were imposed in the upstream boundary, respectively. The corresponding computed bed shear stresses in front of the cylinder were compared with the experimental data, as shown in Fig. 5. Overall, the model reasonably predicts the distribution of the bed shear stress, although it underestimates the maximum value of the bed shear stress for KC number = 6.1, 10.3 and 20.1.

In this paper, a numerical model based on 3D Reynolds-averaged Navier-Stokes equations is presented for current or wave interacting with a circular cylinder. An explicit projection method is utilized to solve the governing equations. The computational grid system is built from a two-dimensional horizontal triangular grid by adding a number of horizontal layers. In model validations, generally good agreement between numerical results and experimental data is achieved, demonstrating that the present model with a non-linear k-ε turbulence model is capable of resolving current or wave interacting with a circular cylinder.