Abstract: To get accurate concentration of drug in systemic way for pharmacological response, Solubility is an important parameter to be shown. Most of the newly discovered chemical entities of the drugs are subjected to lipid lover (lipophile) due to this it carries the properties of poor water solubility. That’s why solubility behavior is one of the most important for formational developments [24, 25]. Colloidal drug has to be in desired properties for the development of drug carrier, it is essential to examine physico-chemical properties of the systems. Bile salt mixed micelles are globally known as novel for drug delivery systems in living organism. The main purpose of the present method is to develop and examine the characterize mixed micelles [3] of anionic bile salts (Sodium deoxycholate and sodium cholate) and drug (Disprine or generic name Aspirin) in various temperatures.

Now a day’s many applications (like in pharmaceutical, Detergency, Paint Industry etc) requires mixed surfactant systems, because it gives better performance and it is more effective even in small concentration than the pure surfactants systems [14, 12, 22 and 29]. The mixed surfactant system’s behavior is synergistic; due to this, the total amount of surfactant required in any application get reduces [27], which in turn thus reduces both cost and environmental impact. The role of micellar catalysis in recent years has been no need to say its importance in different area such as pharmaceuticals, oil recovery industry, environmental as well as Nanotechnological system (Proceedings ICCE Indore 2005). The role of micellar catalysis may not be understood without the knowledge of its critical micelle concentration. This is the concentration where surfactant will work as micelle. Therefore, it is very interesting as well as important to know this factor very correctly and accurately. To begin with, it is useful to know the critical micelle concentration (cmc) of the surfactant used [22,25]. Micelle formation is basically important for solublizing the drug substances which is determined by cmc based calculation. Solubilization of any active substances or drug is dependent on capacity and concentration of miceller system. The micellar formulations show are markable sensitivity to temperature. If the cmc is an important property of surfactants, as commented before, another relevant characteristic is the Krafft temperature. This can be defined as the minimum temperature at which surfactants form micelles. It is also explained in Reflection paper on the pharmaceutical development of intravenous medicinal products that active substances solubilised in micellar systems [24,25]. Below that temperature the formulation will fail because the surfactant remains in crystalline form, even in aqueous solution. On the other hand, as highlighted above, temperature can have a relevant effect on MAC (maximum additive concentration). Normally, micellar structure of drugs have executive charge of by pertaining to injection in to a vein, and are therefore it increases the dilution effects which increases the breaking of the micellar component and also its mobility towards targeted area and sufficiently minimize the risk of precipitation of the active substance in vivo [25]. The method and rate of administration may affect the disposition of drug substance and drug product excipients [25]. In the small intestine, co-administration of food and / or lipids leads to secretion of bile and digestive enzymes that produce a complex system of intestinal colloidal phases designed to facilitate the digestion and absorption of dietary lipids [34]. The increased concentration of bile and the presence of bile salt / dietary lipid mixed micelles can improve the wetting of poor soluble drugs and increase their effective solubility via solubilization [34]. Postprandial absorption may be improved by direct permeability enhancement or by solubilization that facilitates transport of lipophilic drugs across the aqueous diffusion layer. Intestinal lymphatic transport may also contribute to the absorption of highly lipophilic drugs [34].

Some researcher gives valuable knowledge related to this work e.g. Kabir – ud –Din, ate l (2010), give Mixed micellization behavior of antidepressant drug like amitriptyline hydrochloride with cationic surfactants. Tanushree et al; 2006 give The micellization behavior of an anionic Gemini surfactant, GA with non ionic surfactants C12 E8 and C12 E5 in presence of 0.1 M NaCl at 298 K temperature, has been studied of drugs tensiometrically in pure and mixed states, and the related physicochemical parameters (cmc, γcmc, Γmax, and Amin ) have been evaluated. Tensiometric profile in the present report micellization tendency of Sodium Cholate (SC) and Sodium deoxycholate (SDC) with Disprine drug has been measured by conductometric methods. Application of bile salt in drug dissolution and its future scope is explain in Application of bile acids in drug formulation and delivery by (Maja et al; 2013) etc. In present work some other kind of drugs like Disprene, caffeine etc and its thermodynamical and interfacial parameter is calculated. Importance of this work is because 1. Recently, bile acids have drawn much attention in the field of drug delivery due to the irability to act as a drug carrier system in the form of mixed micelles, bilosomes and chemical conjugates with drug. 2. Drugs that are slightly soluble in water may be solubilized with in bile salt micelles, in order to improve their absorption. In aqueous solution, bile acid anions self- associate to form simple micelles. 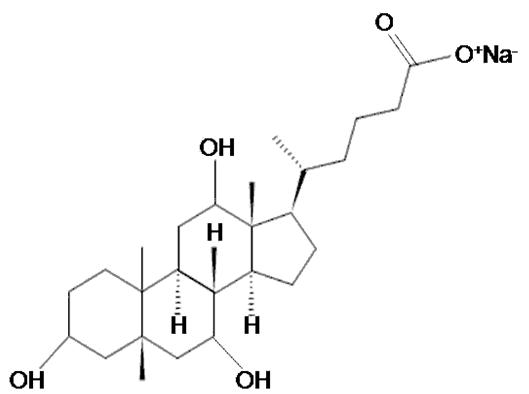 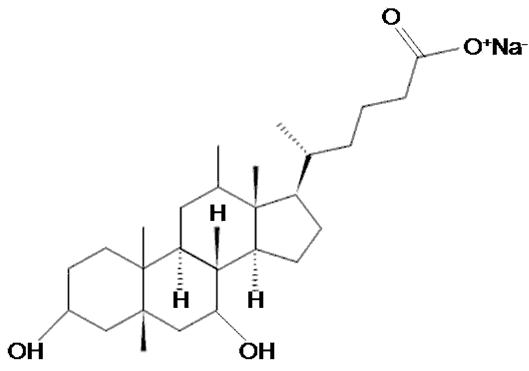 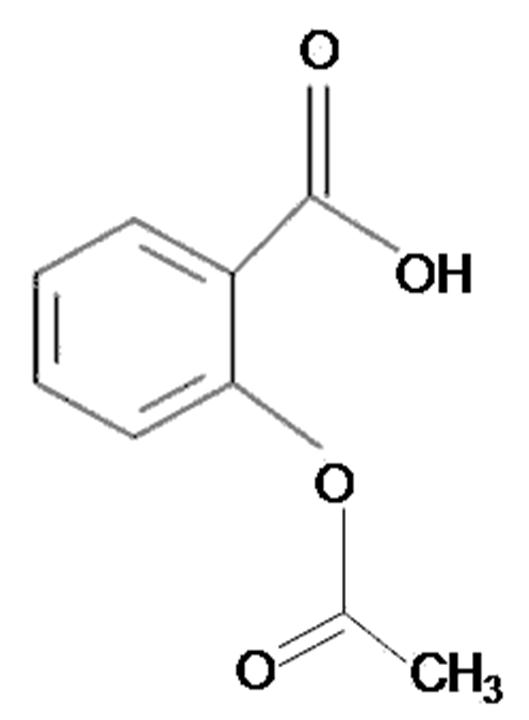 The bile surfactants sodium cholate and sodium deoxycholate used in the experiment was purchased (from LOBA Chemic) and Disprine (form Sigma). All the solutions were prepared in triple distilled water.

b.  Medium-25 ml of triple distilled water taken as the medium for the experiments. 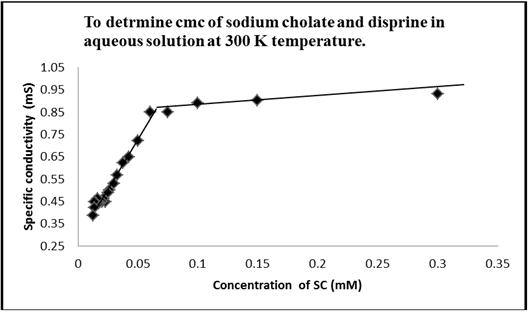 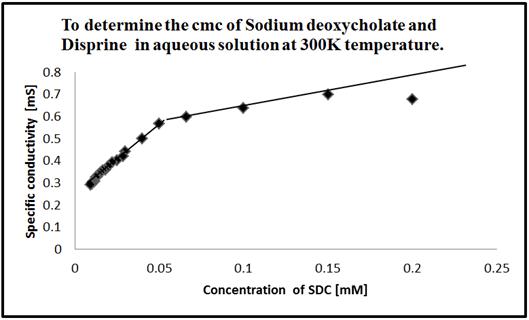 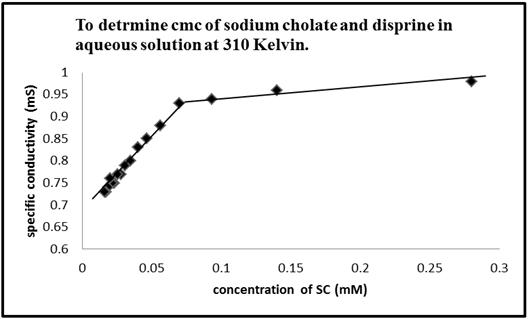 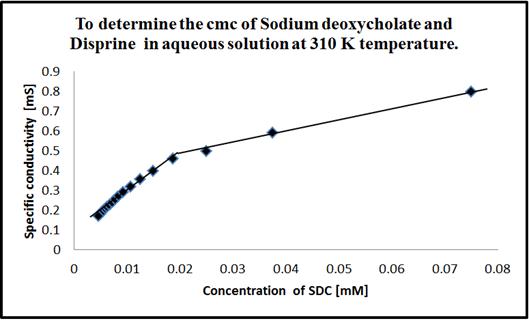 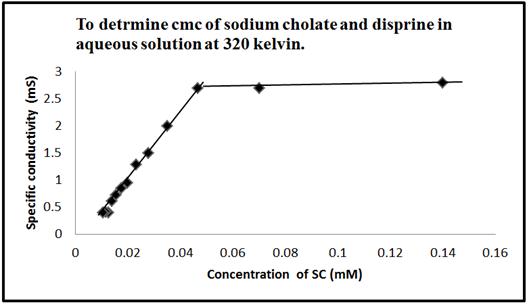 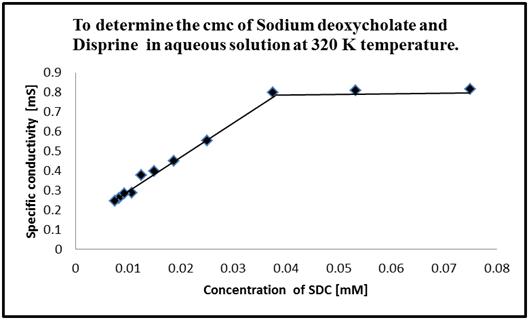 Fig. 10. Representive plot of specific conductance vs concentration of SC (0.03mM) and disprine (0.1mM) in aq. Solution at various temperatures. 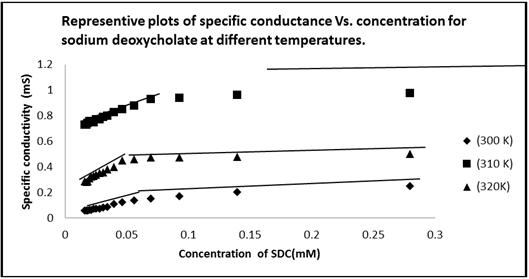 Fig. 11. Representive plot of specific conductance vs concentration of SDC (0.09mM) and disprine (0.1mM) in aq. Solution at various temperatures.

The CMC of the binary mixtures (Bile salt and Drugs) were studied using conductivity measurements, at different mole fractions and different temperature [3]. Prepared mixtures consisted of 0.1-1mole fractions of Sodium cholate and Sodium deoxycholate and 0.1 mole fraction of Disprine. Results are presented in Table 1 and 2.

The cmc values for individual non ionic surfactants and Disprine were obtained through conductometric measurements.

3.2. Effect of Temperature on the Micellization Process

Variation in temperature also affects the value of cmc. Generally the reason behind this fact is based on two terms-1. As the temperature increases the degree of hydration of the hydrophobic group decreases, which favors micellization; however, when temperature increases it destroy the structure of water molecule and surrounding of the hydrophobic group which is unfavorable to micellization and 2. Effect is predominant in the temperature range studied. [As referred in reference 30]. Sodium cholate (SC) and sodium deoxycholate (SDC) also shows various cmc values at different temperatures which have been explain in table 4-5. Result concluded that value of cmc of surfactants in aqueous solution increases with increase in temperature (from 300-320K, see figure4-9)[16-17]. The studies presented here are very attractive from a pharmaceutical point of view. These findings offer important pharmacological options for the development of drugs dissolution by use bile salts. The purpose of this review is to provide a critical examination of the reported solubilization of drugs by bile salt micelles.

3.4. Effect of Drugs on the Micellization Processs of Bile Salts

All the thermodynamics parameters are temperature dependent. [30].

The (standard enthalpy of micellization) ∆H°m can be derived by the Von’t Hoff equation.

The result also shows that standard enthalpy of micellization is negative which indicates that the micelle formation process is exothermic which show strong interaction between drug and bile salts [30].

The ΔS°m is always being positive which indicate that the process of micellization is entropy dominated over the micelle formation process. The positive value of ΔS°m is due to the hydrophobic interaction between the surfactants and water molecule [30, 2]. All values are presented in table 6 and 7.

The present study provides an insight in to the mechanism of interaction of bile salts with Disprine drugs. Based on the experimental findings it is possible to propose the concentration ranges involved with different stages of changes in the solubilisation of drugs by NaDC. The experiments showed that the concentration of a bile salt needed to bring about a certain change in the drugs is strongly dependent on the absolute concentrations of bile salt and not on their molar ratio. The bioavailability of orally administered drugs can be influenced by interacting with food constituent and by physico-chemical conditions in the upper gastrointestinal tract. Normally, bile salts enhance the transport of lipophilic drugs across mucosal membranes. Bile salts are able to form stable mixed micelles consisting of fatty acids and phospholipids. Table 4 and 5 shows that when surfactant (bile salt) added in the drug and distilled water solution, then the dissolution rate of the Disprine tablets increases. It concludes that even presence of small concentration of bile salts is very helpful for the dissolution of various drugs [32].

In method to observing the influence of the structure of drug on formation of mixed micelles [3] with SDC and SC, physicochemical values of micelles and mixed micelle were calculated by using experimental cmc values which is shown in table 6- 7 and table 4- 5.

cmcid, xid, X1 and the β parameter all were calculated using following equation [2, 13].

The cmcidparameter indicates non ideal behavior if it differs from cmcex. The values of xid and the x1 are used to calculate the β parameter. According to Clint’s theory, Critical micelle concentrations for ideal mixtures (cmcid).

The cmcid values are presented and compared to the experimental cmc (cmcex) in Table 8 and 9 [2]. Deviation of the experimentally obtained cmc values from those calculated according to Clint’s theory indicates nonideal behavior of examined surfactant mixtures and mutual interactions of the surfactants in the micelles. The mole fraction of the more hydrophobic surfactant in the ideal mixed micelle (xid), according to Motomura [2, 15], was calculated using the following relationship:

The x1 value was calculated by using following relation:

The xid and the

values for the mixed micelles are presented in Table 8 and 9. Further according to Rubingh [2, 14],

value was used to calculate the β interaction parameter, through the following equation:

Β values explain the synergism or antagonism between two surfactants in mixed micelles. Its negative value indicate attractive interactions (synergism) between components of mixed micelles of drug and bile salt, The less negative value means the weaker synergistic interaction while positive values shows antagonistic interactions between surfactants in a mixture. Its value also shows the deviation between experimentally obtained (cmcex) and calculated (cmcid) cmc values [As referred in reference 2].

The activity coefficients of the two components, 𝑓1 and 𝑓2, are calculated using𝑋1and𝛽valuesas:

The CMC and α value of bile salts (SC and SDC) and drug (Disprine) mixtures were determined in aqueous solution. It was observed that both values were depending on concentration of mixed miceller media and various temperatures. It was observed that micellization tendency of SC and SDC decrease in the presence of mixed miceller media. The thermodynamic parameters are investigated. ΔG°m is negative and becomes less negative with increase in concentration of mixed surfactants and solvent mixture. This suggest the micellization formation is becomes less spontaneous with increase in g amount of surfactants and drug mixture in aqueous solution.

CMC at 300 K decreased but Values of the degree of Counter ion dissociation (α) can be determined by various methods, but is independent of the experimental method.

Table 7. Thermodynamic parameters for the micellization of various concentration of sodium cholate (SC) with Disprine [30].

Table 8. Value of cmci d/ mM, Cmcex/ mM, Xid& X1 and the β of the mixed micelles of Disprine and anionic surfactants (SDC) at different mole fractions in aqueous solution [2].

Table 9. Value of cmci d/ mM, Cmcex/ mM, Xid& X1 and the β of the mixed micelles of Disprine and anionic surfactants (SC) at different mole fractions in aqueous solution [2].

Parameters for Development of Model

xid= Mole fraction of the more hydrophobic surfactant in the ideal mixed micelle,

α = Mole fraction of the more hydrophobic surfactant in the solution.

αi = Mole fraction of the more hydrophobic surfactant in the solution.