Abstract: This paper introduce a new method to realize the set and delivery of the goods by changing speed on the conveyor belt, and the machine control several servo motors by PLC. By adjusting the speed of the servo motors, the speed difference between the conveyor belts realize the separate of goods steady and provide the convenience for the robot. At the same time, the method of adjusting distance of the goods both save the space and reduce the cost.

2. Function and Characteristics of the Set and Delivery System

The goal of the front-end system is mainly to achieve the separation of the equal space between the goods and the speed control to ensure that the goods arrive at the sorting module can achieve the 2m/s running speed to meet the high-speed sorting requirements.

In order to make each link work effectively, the distance between the belts and the sorting performance of the robot is needed. If the transport capacity is less than the sorting ability, the efficiency of sorting will be affected. Adjusting the system to make the same distance between goods can solve this problem effectively. The traditional control method is realized by setting up a quantitative counting mechanism, a storage buffer technique, or a mechanical device which is matched with the conveying belt. The traditional methods have some limitations. Therefore, the system plans to use a new method to adjust the distance.

3. The Construction of the Set and Delivery System

The system uses PLC to control the servo motor, the entire set and delivery system control several servo motor by the PLC, servo motor in the role of PLC control motor speed. Through the design of a flexible control distribution system to facilitate the robot's sorting work, when the goods through the set and delivery module, the module will increase the speed of the conveyor belt to maintain a speed difference between the two adjacent conveyor belts. And the speed difference between the two adjacent conveyor belts will make distance between goods. At the same time, we can control the goods separation distance by designing the speed of several conveyor belts to make the goods transportation at the same distance. As shown in figure 1:

The belt speed change from left to right by setting. For example: VL1< VL2. Once a goods movement from the previous conveyor belt to next conveyor belt, because of the speed change, the effect of friction will make the goods have an acceleration to realize the separation between goods, then we can design the belt through the number and speed to achieve the required.

Assuming that the entire transmission device is composed of six conveyor belts from left to right, and the belt speed become quicker from left to right. That is: VL1< VL2< VL3< VL4< VL5 <VL6. Making research of the relationship between the distance, conveyor belt speed difference and other factors, in order to achieve the calculated spacing distance can be determined according to the external factors, and we need to determine the target distance to complete the requirements with the numbers of conveyor belts. As shown in figureure 2: 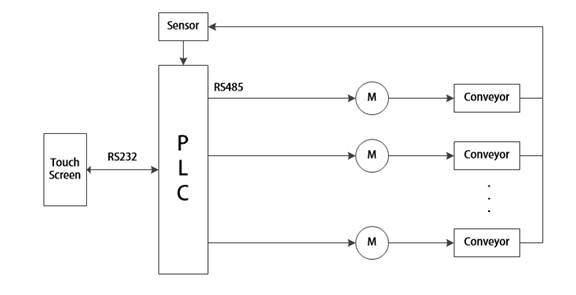 4. The Establishment and Analysis of Spacing Control Model

To make the goods separation by two conveyor belts, we mainly through the three time period to complete:

We can find that x will continue to grow in the process of goods movement, and the acceleration of the goods will continue to change with the continuous bigger of x. It is a continuous process of X change from 0 to h, and we assume that the belt speed is Vh when the goods leave the conveyor completely (V1<Vh<V2), according to the principle of calculus, the Vt is the speed of the goods run time t from the critical point (V1≤Vt≤Vh), we can know:

At this time, Dt is the distance when the goods begin to run from the critical point:

When the Dt=h, the goods has just left the previous belt, we can know the running time th:

At this time we can find, the move distance of goods 2 in the time of th is V1th, So the distance between two adjacent goods L1 and L2 in this period is:

h1: The total distance of goods 1 from the critical point to the previous conveyor belt before leaving.

V1: The speed at the previous conveyor belt.

th1: The running time of goods 1 from the critical point to the previous conveyor belt before leaving.

L1: The total length of the goods 1 contact with the conveyor belt

: Coefficient of friction between goods 1 and conveyor belt

So the distance between two adjacent goods L1 and L2 in this time of Th2 is:

V2: The speed of the former conveyor belt

h2: The total distance of goods 2 from the critical point to the previous conveyor belt before leaving.

L2: The total length of the goods 2 contact with the conveyor belt

: Coefficient of friction between goods 2 and conveyor belt

And the distance between the goods 2 and the goods 1 is in this period of time is:

In summary, when two goods pass the two segment of the transmission belt, the distance is:

, the speed V1 of the previous belt and the speed V2 of the former belt, we can determine transmission process between the two belt and we can know the distance of the adjacent goods.

Multi section discrete automatic control system is realized through PLC combined with servo motor control, we achieve the difference of the conveyor belt by the control of the servo motor.

According to the actual set and delivery system, the system choose the DVP10MC11T PLC

The PLC related parameters are as follows:

2.   encoder interface: to provide 24V and 5V voltage output, for the encoder to use; A, B phase difference input, the maximum frequency of 1MHZ

The belt speed of the set and delivery system is no more than 2m/s, according to the experience we choose the servo system ASDA0423-M, the servo system ASDA-M have some advantages: each axis provide 6 D and 3 DO; there are 18 DI and 9 DO totally. At the same time, ASDA-M combine three servo motor in one machine and three axis control, data exchange between axes, no time delay. Software has a simple circular analysis function and it can strengthen the ability of diagnosis system. 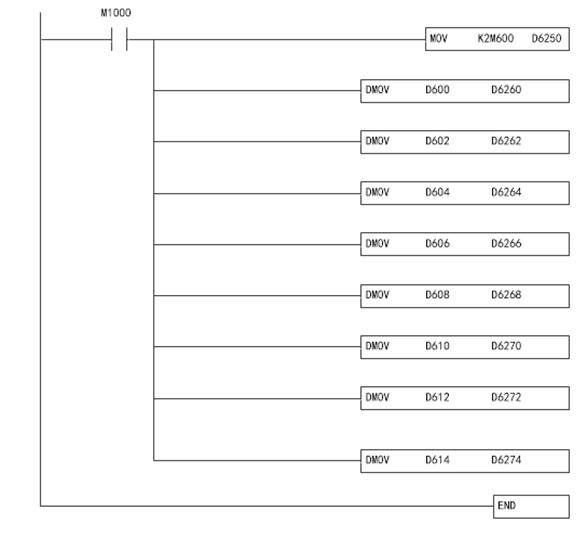 Figure 4. The program of servo motor to control the speed of the conveyor belt.

The main content of this paper is to establish the belt discrete control system, we can know object separation distance depends on the conveyor belt between the system through modeling and analyzing the differential size and other factor, the system have a small separation of the large distance estimates by determining the speed difference of objects, and provides a theoretical basis for the robot the starting point of grasping distance. At the same time, through the system analysis to the actual operation of the program control system controlled by PLC servo motor speed control of belt transmission, which increases the flexibility of the speed control can improve the stability of the system. Finally, the experimental results show that it can solve the problem of the accumulation of goods effectively, and provide convenience for the subsequent robot sorting system.

This paper is based on Beijing Wuzi University Graduate Innovation and Entrepreneurship Project, item number: 0541605843.