Abstract: The evaluation of Optical Orthogonal Frequency Division Multiplexing (OOFDM) using Least Mean Square Time-domain Equalizer (LMSTE), its normalized form (NLMSTE) and Decision Feedback Time-domain Equalizer (DFTE) to reduce Cyclic Prefix (CP) length over 1200 Km of Standard Single Mode Fiber (SSMF) is presented. All of these TEQs are used immediately after the fiber channel. They can cancel the residual Inter Symbol Interference (ISI) and Inter Carrier Interference (ICI) caused by both the Group Velocity Dispersion (GVD) and the CP length being shorter than the Channel Impulse Response (CIR). Using these TEQs allow the reduction in size of CP, and consequently leading to system performance improvement. Using DFTE can decrease the noise whereas using NLMSTE can solve the problem of choosing the gain of LMS algorithm to make it stable since LMS algorithm is sensitive to the scaling of its input.

Orthogonal Frequency Division Multiplexing (OFDM) [1] has been employed for fiber optic communication because it is an effective solution to ISI, when symbol period of each subcarrier is longer than the delay spread caused by GVD [2,3].

To eliminate the effect of ISI, OFDM system adds a CP to the waveform [1]. If the CP length is sufficiently long, any time shift will not affect the received signal. Therefore, the subcarriers will remain orthogonal. But, the CP wastes transmission capacity, if its length is not optimized [4]. When the CP length is longer than the CIR, ISI can be eliminated so that the effect of delay spread caused by GVD in long-distance SMF leads to frequency selective fading of individual sub-band channels. Luckily, this fading can easily be cancelled by using one-tap Frequency-domain Equalizer (FEQ) [5]. However, this method will waste the energy within the CP, because the system leads to low energy efficiency. On the other hand, if the CP length is shorter than the CIR, energy wastage is reduced but the system performance will be limited by ISI [6].

However, using DFTE can decrease the noise [7-10] whereas using NLMSTE can solve the problem of choosing the gain of LMS algorithm to make it stable since LMS algorithm is sensitive to the scaling of its input [11].

denotes the frequency domain data symbol of the

-th sub-band of the

-th OFDM symbol, then the transmitted OFDM symbol in discrete-time domain will be shown as:

is an N-point Inverse Fast Fourier Transform and

is the time domain index of the OFDM sample.

Then the CP is added to the signal to avoid the ISI provided by the long- distance SMF Channel. If

denote the extended OFDM symbol and length of the CP, respectively, it can be written as:

After D/A conversion, the components are used to drive the electrical modulator. To provide an optical output power proportional to the electrical drive voltage, the optical modulator is assumed to be linearized. It has been shown that Mach-Zehnder modulators without linearization can be used in O-OFDM [4,10,11]. The modulator output is then coupled into the SMF channel. Receiver Gaussian Noise is then added to the channel output, so that the received samples,

are the discrete-time impulse response of the SMF Channel and Gaussian Noise in the time domain, respectively.

When the CP length is shorter than the CIR, the ISI will not be completely cancelled. The residual ISI reduces the performance of the system. Transformation of Equation (3) in frequency domain can be written by:

When the received samples,

is applied to the receiver, the LMS/NLMS/DFTEs estimates the channel information and determines the tap weights. This adaptive process is given by equations (5)-(8) for LMSTE and NLMSTE, respectively:

is training data. Then, the TEs output can be obtained as:

Now, 1-tap FE can cancel the residual ISI for

For DFTE, a Mean Square Error (MSE) criterion is used to decrease the noise. The MSE criterion can reduce the signal variance at the decision portion, so that the noise will decrease [12]. If

are the CIR coefficients and

can be written as:

is the variance of the noise and

is the delta function.

To simulate the system, a direct-detection O-OFDM with double-sideband optical signal as shown in figure 1 is used. 512 sub-carriers with the sub-carrier spacing of 40 MHz achieving 20.48 Gb/s are modulated using a 4-QAM constellation The OFDM symbol duration is T=25 ns. 15 spans of 80 km standard SMF is used as transmission line. GVD characterizes the channel model with dispersion coefficient 17 Ps/(km-nm), wavelength 1.55 µm, fiber length of 1200 km and attenuation coefficient 0.2 dB/km. The photodiode noise is given by the contributions of shot noise and thermal noise which are independent random processes with approximately Gaussian statistics [13]. After each span, amplifiers with a flat gain of 20 dB and a Noise Figure (NF) of 5 dB are used. Polarization Mode Dispersion (PMD) coefficient of the lab fibers is considered 0.07-ps/sqrt(km) resulting a mean Differential Group Delay (DGD) value of ~ 2.5 ps. To evaluate the system performance, the Bit Error Rate (BER) versus Optical Signal to Noise Ratio (OSNR) is plotted using MATLAB. The BER is measured over a 12.5 GHz noise bandwidth, which is equivalent to 0.1 nm at 1550 nm.

Figures 2-4 present the BER in terms of OSNR for the OOFDM receiver with using LMS//NLMS/DFTE for different size of CP while considering 6, 8, 10-tap LMS/NLMSTEs and 3/2, 4/2, 6/5 feedforward/feedback-tap DFTE, respectively. Additionally, the power penalties versus CP duration for LMS/NLMSTEs and NLMS/DFTEs are presented in Figs. 5 and 5, respectively. 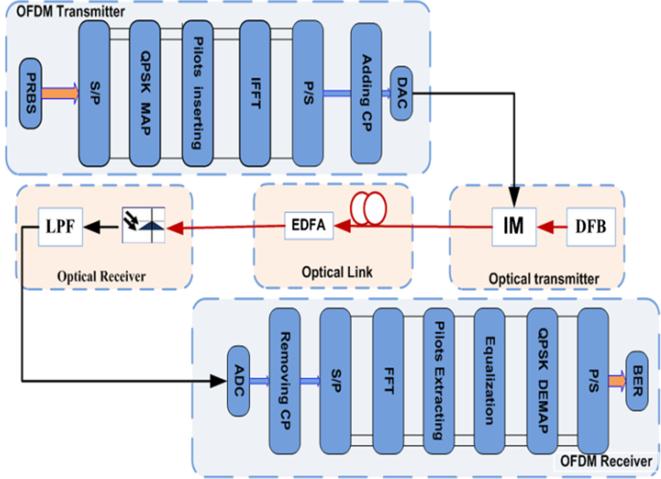 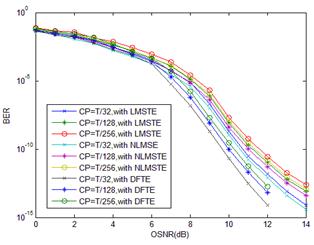 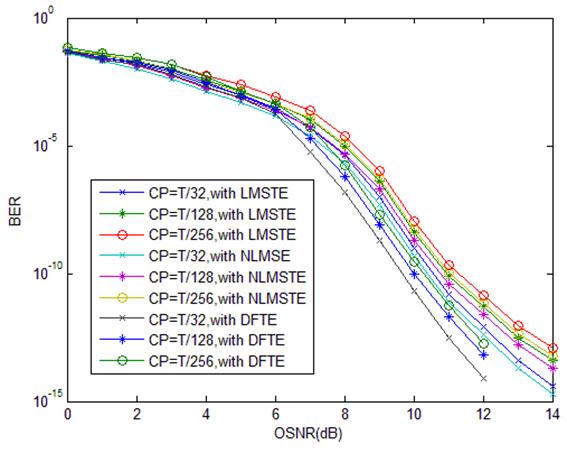 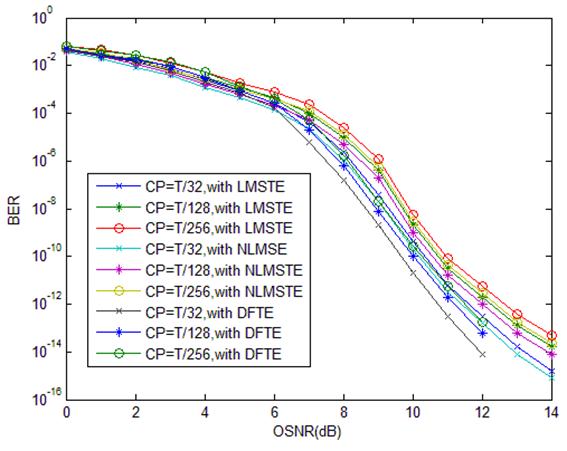 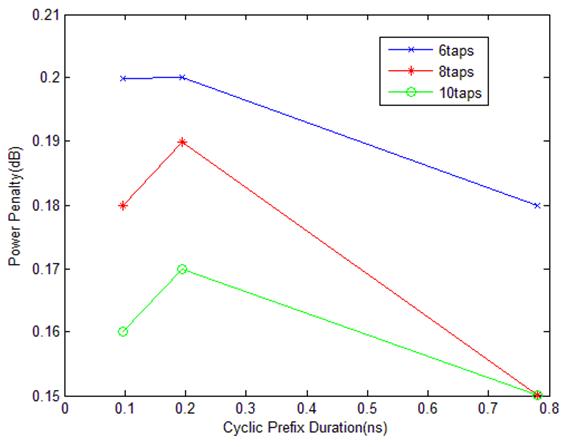 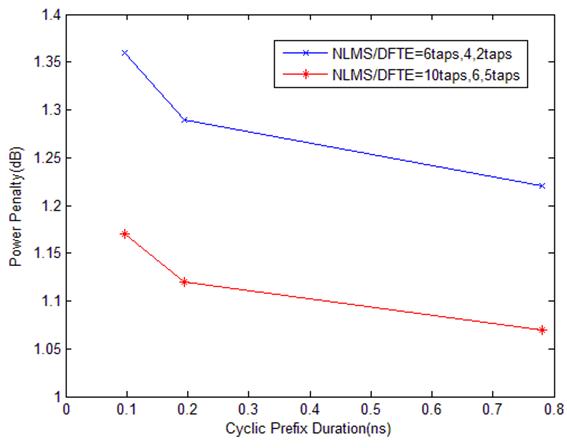 In addition, the efficiency of the OFDM system can be defined as [14]:

are efficiency of the OFDM system, OFDM symbol duration and CP length, respectively. From (13), by using TEQs immediately after the channel, the calculation efficiency is 99.61% while considering CP=T/256.

In this paper, three TEQs are compared for Direct-Detection OOFDM system to cancel the residual ISI and ICI caused by both the GVD and the CP length being shorter than the CIR while considering 1200 km of SSMF. Based on simulation results, DFTE has better performance compared to the others.