The Marine Environment Bulletin data was indicated that large areas of China’s coastal waters were under an unhealthy statefor several years.However, besides the regular marine monitoring data, dynamic change prediction of water quality can provide a necessary assistance to solve the marine pollution problem. In recent years, several studies have been carried out worldwide on water quality prediction models to provide the necessary theoretical basis for marine environment protection.

It is worth mentioning that the source of real-time Monitoring DO sate is the marine buoy near Aoshan Island. The data collected from 2013.08.20 to 2015.04.30 with sampling period of 15minutes.

Preprocessing of original data was filtered and averaged, and 504 training sample data were obtained for modeling. Sample of data was given in the Table 1. The period of data chosen as input for the model was between 2015.04.21 and 2015.04.30.

This study mainly based on the Grey Series Forecastingtheory.The Algorithm principle and modeling methodof GM (1,1) prediction model were describes as followed:

is generated by once accumulated generating sequence

to generate the background value sequence

Discredited the above formula, and get GM (1,1) gray differential equation:

Whereas the development factor, b is the amount of gray effect.

Using the least squares method, we can solve the parameters (a and b) in the formula (6), namely:

as the predicted value of

, and by solve albino equation and grey differential equation, we get:

Then after a regressive reduction, we get:

, process accumulation and get a cumulative sequence

by GM (1,1) prediction model and establish the albino equation and gray differential equation, then get the fitting data sequence

5) According to the relationship between the gray prediction and residual prediction results:

,to obtain a combination of the model prediction series 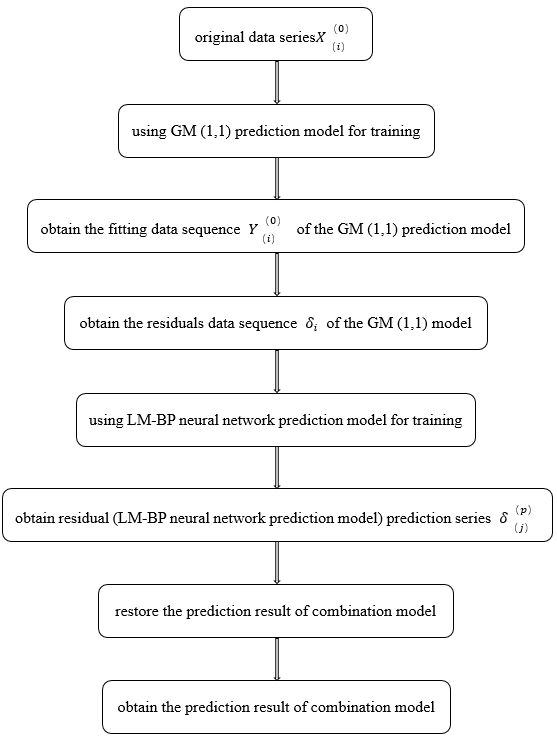 Sample data of DO concentration over Aoshan sea area from2013.08.20 to 2015.04.20 were selected as the training sample data.Equal dimensionrecurrence GM (1,1) forecast model was used to (see Section 1.2 specific principles) establish prediction model and predictthe following tendaysand the results were illustratedin table2and table3.

Select a three layers BP neural network prediction model, including one hidden layer. The BP neural network parameter, include that learning algorithm isLM algorithm,transfer function of the input layer and the hidden layer is sigmoid type function, the output layer function is linear transfer function, train 10,000 steps, learning rate is 0.05, prediction accuracy is 0.0001, prediction length is 10, hidden layer neuron is 8 (drawn from the experience). Finely, 504 sample data of DO concentration in Aoshan sea area from 2013.08.20 to 2015.04.20 as the training data. In order to improve the speed of network convergence, the training data were normalized and converted to [0,1], to build the training network. Training results were given in table2 and table3.

.Finally, according to the relationship between the gray prediction and residual prediction results:

. The results were given in table2and table3.

Table 3. The results of the relative error of the three prediction model.

Combination model compared with the prediction of a single model has an obvious advantagein the oceanDO, but the external environmental factors (such as: temperature, pH, salinity, nutrients) also having a great influence on DOvariations. Hence,by established a TS fuzzy neural network integrated model to give a higher accuratepre-warning methodsof water quality and found relationship of each single factor in the study over three Taihu Lake Basin(Zhang and Gao 2015).This paper only considered the relationship between the time seriesof DOso that the model has some limitations, and establish a multi-factor model prediction will be more reasonable.

(3) LM-BP neural network use the least squares method, which can effectively solve the traditional BP neural network exist easily falling into local minima and improve the accuracy of the model;

This work was supported by special research grant for non-profit public service, National Bureau of Oceanography (201305012-2).