Contents
1. Introduction 2. The Theory and Method 3. Analysis and Results 3.1. Pulsar Properties 3.2. Photon Flux and Luminosity Values of the Four PWNe 3.3. The k-γ Phase Space of the Cooling Time of the Four PWNe 4. Discussion 5. Conclusions

Pulsar Wind Nebulae (PWNe) are clouds of relativistic electron and positron. They are continuously powered by the relativistic electron and positron wind that comes from their associated pulsars. Pulsars are highly magnetized rotating neutron stars. In 1934, the existence of neutrons stars was proposed by astrophysicists Walter Baade & Fritz Zwicky (Baade & Zwicky, 1934). Sun like stars will not form neutron stars. Only massive stars (at least 1.5 times larger than our sun) will undergo a supernova explosion and become neutron stars. In 1939, the first equation of state of neutron star was evaluated by J.R. Opppenheimer & G. Volkoff (Oppenheimer & Volkoff, 1939). Then in 1967, F. Pacini (Pacini, 1967) proposed that the electromagnetic waves come from highly magnetized rotating neutron stars. Also he proposed that the Crab nebula was powered by such a star. The first pulsar was discovered by Jocelyn Bell and Anthony Hewish in 1967 who were studying interplanetary scintillation at Cambridge at that time. The pulsar discovered by Bell and Hewish is now called PSR B1919+21: PSR stands for Pulsating source of Radio and B1919+21 indicates the position of the pulsar in the sky. In 1968, Pacini’s proposed theories were confirmed by Bell and Hewish (Hewish & Bell, 1968) using the first discovered pulsar in 1967.

The most well-known and also a prototypical PWN is "The Crab nebula" (Hester, 2008). The Crab nebula was associated with a supernova (SN) explosion observed in 1054 CE (Stephenson & Green, 2002). In the beginning, a 16th magnitude star embedded in the Crab Nebula was long presumed to be the stellar remnant and central engine (Minkowski, 1942; Pacini, 1967). This was confirmed by after the 33 ms optical and radio pulsations were detected from this star in the late 1960s (Cocke, Disney & Taylor, 1969; Staelin & Reifenstein, 1968) and then these pulsations were shown to be slowing down at a rate of 36 ns per day (Richards & Comella, 1969). So scientists concluded that the Crab nebula contains a rapidly rotating young neutron star (pulsar) formed in the SN explosion of 1054 CE.

At present, 33 TeV PWNe were detected (TeVCat, 2014).Current understanding is these TeV Photon are produced by the inverse-Compton Scattering. During the inverse-Compton Scattering process, low-energy photons become high-energy photons by the ultra-relativistic electrons and positrons in PWNe. Also in the same time ultra-relativistic electrons lose their energy and cool-down to low-energies.

So the process happening inside the PWN is equivalent to a birth & death process. The entering of an electron to PWN can be considered as a birth & the loss of energy of an electron due to inverse-Compton scattering in the PWN can be considered as a death. As the life time in the birth and death process means the time gap between birth and death, the cooling time of ultra-relativistic electrons in PWN means the average time that an ultra-relativistic electron takes to cool-down by inverse-Compton scattering.

In other words, cooling time means the average time of an electron stays in the Pulsar Wind Nebula region, before it emits a TeV gamma-ray photon. The new generation of ground-based Imaging Atmospheric Cherenkov Telescopes (IACTs, e.g: High Energy Stereoscopic System, "HESS") have now begun to detect PWNe in the TeV band. The current structure of the PWNe was defined with as magnetized plasma and which is thought to consist mainly of energetic electrons and positrons (Gaensler & Slane, 2006).

Table I. Selected four TeV PWNe and their associated Pulsars.

2. The Theory and Method

In this Section, we introduce a new statistical technique to estimate the cooling time of ultra-relativistic electrons in PWN. The rate of loss pulsar’s rotational kinetic energy (energy output of the pulsar) is called spin-down luminosity (

tc = Characteristic age of the pulsar

Po = Initial period of the pulsar

P = Current period of the pulsar

Characteristic age is a rough estimate of the real age of the pulsar. Following Mayer et al. (Mayer at el., 2013; Equation (4)), it is defined as,

denotes the time derivative of the rotational period of the Pulsar.

, where Tcooling is the cooling time.

is called the inverse-Compton scattering frequency. This frequency is denoted as "b". So the relationship between b &

can be written as follows.

In order to find b, one has to find an expression for the number electrons exist in PWN at time t. Figure I shows the block diagram of structure of the Pulsar and PWN system. 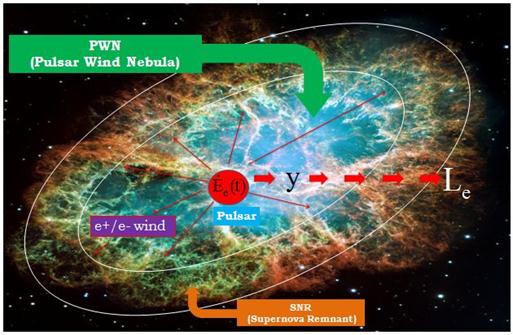 Figure I. Structure of the Pulsar and Pulsar Wind Nebula system (Adapted from: hubblesite.org).

Here y denotes the number electrons exist in PWN at a given time t. The technique was used to obtain an expression for y is similar to a water tank that drain water while filling in. If we know the incoming rate of water to the tank and out going rate of water from the tank, we can find the amount of water at time t using a first order differential equation. In this study, the incoming rate is the number of electrons enter to the PWN per unit time and out going rate is the number of electrons cool-down per unit time in PWN. The rate of change of y can be written as;

e(t) = rate of electrons coming in to the PWN

b.y = rate of electrons cool-down in the PWN

(t) is the total energy comes to PWN. It is divided by the energy per electron (γ m0c2) to get the number of electrons come to PWN per unit time.

o = initial spin down luminosity of the pulsar

to = spin down time scale of the pulsar

y = number of electrons exist at time t in the PWN

e (t) denotes the birth rate and b.y denotes the death rate of the process. An expression for y can be obtained solving the differential equation 7,

where Le is number of TeV photons per second.

The above equation has 2 unknown parameters except b. They are k and γ. Here k is the high energy electron fraction in PWN and γ is the Average Bulk Lorentz Factor of electrons which are coming from the pulsar wind. The

o and to belong to the pulsar properties and Le is a PWN property. The exact k and γ values of the four PWNe, which were used in this paper, are not estimated yet. Therefore the "b" values were found for a group of k and γ values.

The position of each of four pulsars with coordinates of right ascension and declination were given in Table II.

The rotational period (P) and its time derivative (

) of all four pulsars were found from the ATNF pulsar database and those values were given in Table III.

values of the four Pulsars.

The characteristic ages of the four pulsars were given in Table IV.

The spin-down timescale (to) values of the four Pulsars were given in the Table VI.

Table VI. Spin-down timescale (to) values of the four Pulsars.

The following Table VII shows that the current rate of loss of rotational kinetic energies (current spin-down luminosity, at t= tc ) of the four pulsars.

3.2. Photon Flux and Luminosity Values of the Four PWNe

3.3. The k-γ Phase Space of the Cooling Time of the Four PWNe 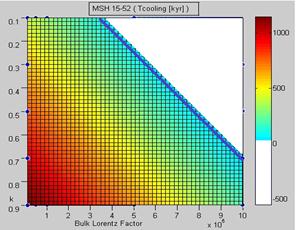 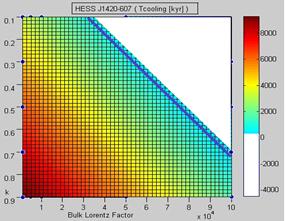 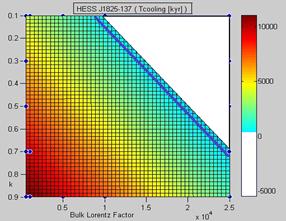 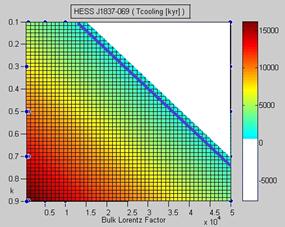 Table X. Ranges of the cooling time vary of the four PWNe.

We found that the cooling time depends on k and γ. Here k is the high energy electron fraction in PWN. It means the ratio of number of high energy electrons in PWN to total number of electrons in PWN. So k is fraction which should lie between zero and one. To our knowledge, exact k and γ for the four PWNe used here are not estimated yet. So we used five different k values (k = 0.1, 0.3, 0.5, 0.7, 0.9) for all four PWNe. However, one can use any value for k, but it should be in the range between zero and one because k is a fraction. Also one can use more than five values for k. If someone estimates the exact value for k for a PWNe then that value can be applied directly for k.

According to the inverse-Compton in the Thomson regime energy losses, the cooling time can be written as (Rybicki & Lightman, 1979).

Another formula for the inverse-Compton cooling time valid in Thompson regime can be written as (Araudo et al., 2009).

Our technique can be applied to any PWN with a detectable pulsar. The estimated ranges of the cooling time using the new method here, are also in thousand year (kyr) scale (Table X). So these results verify that the new method develop here can be used to estimate the cooling time of ultra-relativistic electrons in PWN. If someone estimates accurately the k and γ values for a PWN, then one can find the exact "b" value from

We would like to give our special thanks to Dr. A. Udara Abeysekara at Department of Physics and Astronomy, University of Utah, for guiding our work, giving us constructive feedback, and for the encouragement to publish this work.