Abstract: Triphenyl phosphate (TPP) is a triester of phosphoric acid and phenol. It is commonly used as a fire-retarding agent and plasticizer for nitrocellulose and cellulose acetate. The present study was an attempt to evaluate the impact of biofield treatment on physicochemical and spectroscopic properties of TPP. The study was carried out in two groups i.e. control and treatment. The treatment group was subjected to Mr. Trivedi’s biofield treatment. The control and treated samples of TPP were characterized using X-ray diffraction (XRD), differential scanning calorimetry (DSC), thermogravimetric analysis (TGA), Fourier transform infrared (FT-IR), and ultraviolet-visible (UV-Vis) spectroscopy. XRD study revealed the decrease in crystallite size (6.13%) of treated TPP that might be due to presence of strains and increase in atomic displacement from their ideal lattice positions as compared to control sample. DSC thermogram of treated TPP showed the increase in melting temperature (1.5%) and latent heat of fusion (66.34%) with respect to control. TGA analysis showed the loss in weight by 66.79% in control and 47.96% in treated sample. This reduction in percent weight loss suggests the increase of thermal stability in treated sample as compared to control. FT-IR and UV spectroscopic results did not show the alteration in the wavenumber and wavelength of FT-IR and UV spectra, respectively in treated TPP with respect to control. Altogether, the XRD and DSC/TGAresults suggest that biofield treatment has the impact on physical and thermal properties of treated TPP.

Organophosphorus compounds are comprising carbon–phosphorus bonds. These are mainly used for pest control as an alternative to chlorinated hydrocarbons that persist in the environment [1]. Phosphate esters are the groups of organophosphorus compounds with the general structure P(=O) (OR)3. Triphenyl phosphate is the triester of phosphoric acid and phenol, which is mainly used as the flame retardant agents and plasticizers [2]. Recently, TPP reported as an electrolyte additive to improve the electrochemical performance and thermal safety of lithium-ion cells. The conventional lithium-ion batteries have the major issues of safety concerns in the practical application. The TPP is reported to be stable at potentials up to 4.9 V (vs. Li/Li+), therefore electrolyte containing TPP had enhanced thermal stability [3]. As evidenced from the literature, the thermal properties of TPP are crucial for its applications as flame retardant agent [4]. Hence, it is advantageous to find out an alternate approach that can improve the thermal stability and other physicochemical properties of TPP in order to get the more useful product. Recently, biofield treatment was reported to alter the physicochemical properties of several metals [5, 6] and ceramics [7, 8] and spectroscopic properties of various pharmaceutical drugs like paracetamol, piroxicam, chloramphenicol and tetracycline. [9, 10].

German scientist George Christopher Lichtenberg coined the term Bioelectrography in 1770 and reported that light coming out from different subjects in electrical fields [11]. It is well known that moving atoms in translation, rotation or vibration state produces the electromagnetic radiation, which is also evident from acoustic and vibrational spectroscopy [12]. Similarly, the cells present in human body are also consist with electrons, protons, neutrons and other fundamental particles that are always in vibratory motion. As a result, the bioenergetic field emitted, which surround the human body [13]. In addition, human body used psychological and emotional energies in the form of electrical impulses that also generates the bioenergetic fields to outside the human body [14]. A human has the ability to harness the energy from the environment or Universe and transmit this energy into any object (living or nonliving) on the Globe. The object(s) receive the energy and respond into useful way, this process is termed as biofield treatment. Mr. Trivedi’s unique biofield energy treatment is also known as The Trivedi Effect®. Recently, the biofield treatment is evaluated in several field like material science [5-8], agricultural science [15, 16], biotechnology [17], and microbiology [18-20].

Triphenyl phosphate was procured from S D Fine-Chem Limited, India. The study was carried out in two groups i.e. control and treatment. The control sample was remained as untreated; and treatment sample was handed over in sealed pack to Mr. Trivedi for biofield treatment under laboratory conditions. Mr. Trivedi provided the biofield treatment through his energy transmission process to the treatment group without touching the sample. The control and treated samples of TPP were evaluated using various analytical techniques like X-ray diffraction (XRD), differential scanning calorimetry (DSC), thermogravimetric analysis (TGA), Fourier transform infrared (FT-IR), and ultraviolet-visible (UV-Vis) spectroscopy.

XRD analysis of TPP was accomplished on Phillips, Holland PW 1710 X-ray diffractometer with copper anode and nickel filter. X-ray wavelength used in XRD system was 1.54056 Å. The XRD data were obtained in the form of a chart of 2θ vs. intensity. The crystallite size (G) of TPP was calculated using the following equation [21].

The control and treated samples of TPP were studied using a Pyris-6 Perkin Elmer differential scanning calorimeter (DSC) on a heating rate of 10ºC/min under air atmosphere with air flow rate of 5 mL/min. An empty pan sealed with cover pan was used as a reference pan. The melting temperature (Tm) and latent heat of fusion (ΔH) were acquired from the DSC curve.

Thermal stability of control and treated TPP were studied using Mettler Toledo simultaneous TGA and differential thermal analyzer (DTA). The samples were heated up to 400ºC from room temperature at a heating rate of 5ºC/min under air atmosphere. Percent change in temperature at which maximum weight loss occur in sample was calculated from DTG thermogram.

FT-IR spectra of control and treated samples of TPP were recorded on Shimadzu’s Fourier transform infrared spectrometer (Japan) with frequency range of 4000-500 cm-1. The analysis was accomplished to evaluate the effect of biofield treatment at atomic level like dipole moment, force constant and bond strength in chemical structure [22].

UV spectra of control and treated samples of TPP were obtained from Shimadzu UV-2400 PC series spectrophotometer. A quartz cell with 1 cm and a slit width of 2.0 nm were used for analysis. The study was carried out using wavelength in the range of 200-400 nm. The UV spectra were analyzed to determine the effect of biofield treatment on the energy gap of highest occupied molecular orbital and lowest unoccupied molecular orbital (HOMO–LUMO gap) [22]. 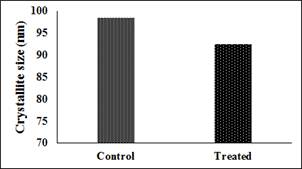 UV spectrum of control TPP showed absorbance maxima (λmax) at 204.8, 255.4 and 260.4 nm. Similar pattern of λmax was also observed in both the treated samples (T1 and T2) i.e. at 205.6, 255.6, and 260.6 nm in T1 and 205.0, 254.0, and 260.0 nm in T2. Overall, the UV spectral analysis suggests that biofield treatment did not cause any significant alterations in the λmax of treated TPP sample with respect to control. Altogether, the UV and FT-IR result, suggest that biofield treatment did not alter the structural properties of TPP with respect to control.

The authors would like to acknowledge the whole team of MGV pharmacy college, Nashik for providing the instrumental facility. We would also like to thank Trivedi Science™, Trivedi Master Wellness™ and Trivedi Testimonials for their consistent support during the work.