Suicides in Ilam District of Nepal

Abstract: This is a review of suicides through post-mortem reports committed in Ilam district of Nepal. The review is base on all total 112 post-mortem reports of three consecutive fiscal years (2001/02, 3002/03, 2003/04) available in District Health Office Ilam. Epi-Info software used to analyze the samples in the computer. Findings showed the ethnic distribution of the samples was indigenous Janajati 53.7%, Brahmin 29.5%, Dalit 8.9% and Chhetri 8%. Sex ratio of female to male was 2:1. The mean age of suicide noticed in male 34 years and in female 35 years. Suicides from Ilam municipality, Mangalbare and Maipokhari villages recorded high. Means of suicides were hanging 71.43%, organophosphate poisoning 12.5% and weapon 1.79%, fire 1.79%, fall 1.79%, and drown 0.89%. The highest suicides noted in 20-29 ages group. The trend of suicides was increasing over the past 11 years (1992-2003) in the district.

WHO defines suicide is the act of deliberately killing oneself. WHO estimates over 800,000 deaths from suicide and it is the 15th leading cause of death that accounts 1.4% of all deaths globally in 2012 [1]. Suicide is social as well as public health problem. It is preventable mental illnesses. People those who are liable to commit suicide find life hopeless, helpless and despair. It becomes unbearable to them [2]. But our help to change their life prevents them from committing suicides [3].

Ilam district is one of the hilly districts of the Eastern Nepal. It covers an area of 1,714 square km with population 290,254 [4]. It is a beautiful hilly land from where one of its roads goes from Fikkal through Pashupati Nagar, the border town, leads to Darjeeling of India. Agricultural products from tea garden, cardamom, milk and tourism play vital role in raising economic condition of the district. Different ethnic groups are living in the district including Brahmin, Limbu, Chhetri, Newar and marginalized groups such as Lepcha, Sherpa, Sunuwar etc. Climate of the district is sub-tropical climate cold and freezing in the winter, mild warm in summer and fog in the monsoon season.

Ilam district has highest incidence of suicide in Nepal [5]. It attracted many researchers and mental health programs. But reports based on reviewing post-mortem records lacks in the district. To get demographic information of those committed suicide is basic and important knowledge for the program. Information about geographical distribution of suicides guides researcher and assists for planning. Apart from this information, means of suicides is also important for the knowledge. The post-mortem reports which are available in the governmental authority are authentic and reliable source of information although it is secondary data. On one hand, a post-mortem report is a technical report on the other it is also a legal tool prepared by a medical officer. Reviewing post-mortem reports of three consecutive years presents a glimpse of suicides in the district.

Mental disorders, alcohol dependence and chronic illnesses are risk for suicides. Depression, schizophrenia, and diseases like cancer, HIV infection expose to the suicide [1]. Mentally disturbed and chronic ill patients are likely to commit suicide. They do not seek any treatment due to lack of awareness and superstition [6]. A research conducted in Greece shows relationship between suicide and seasonal variation of sunshine [7].

Suicide is complex phenomenon which is associated with social, psychological, biological circumstances. A retrospective study on suicide in USA find out age ranged from 12 to 94 years. The study noted male 79.5%, female 20.5% by sex and whites 78.3%, black 21.7% by race. The most common method to commit suicides was gunshot 64.6% of the cases [8].

In Eastern Nepal BPK Institute of Health Science a referral hospital reported suicides committed by male 17 (46%) and female 20 (54%) in the fiscal year of 1995-96. The sex ratio of female to male was 1.2:1and mean age of suicides was 26.9 years. Common means of suicide was organophosphate poisoning [10]. It indicates women of reproductive age were committing suicides in Eastern Nepal.

In western countries larger numbers of married women commit suicide and there is also high use of organophosphate insecticides [11]. Study noticed interpersonal relationship was cause of suicides.

4. Objective of the Study

The aim of the study was to review post - mortem reports and analyze demographic characteristics of those who committed suicides, means of suicides and trend of suicides in Ilam district. Specific aims were to find which areas, age, sex, and ethnic were committing suicides. The study aimed to calculate the trend of suicides over the past 11 years in the district.

This review was based on the secondary data available in District Health Office Ilam. The office made available total 112 postmortem records of three consecutive fiscal years 2001/02, 2002/03 and 2003/04 [12]. Reports studied thoroughly and information on demographic characteristics means of suicide entered into computer. Epi-Info software analyzed the data in the computer. Data made available by District Police Office published in a national newspapers also included in the study [13].

Ministry of Health, Eastern Regional Health Directorate gave permission for the review and District Health Office Ilam gave consent to carry out the study of post-mortem reports which was available in health management information system (HMIS).

The analysis of post-mortem shows age distribution of suicides ranged from 10 to 80 years.

Figure 1 shows the age distribution of suicides ranging from 10 to 80 years. Suicides were highest among the age group of 20 to 29 years.

Sex ratio and mean age of suicides calculated in the study.

The trend of suicides is based on the District Police Office report published in a newspaper. 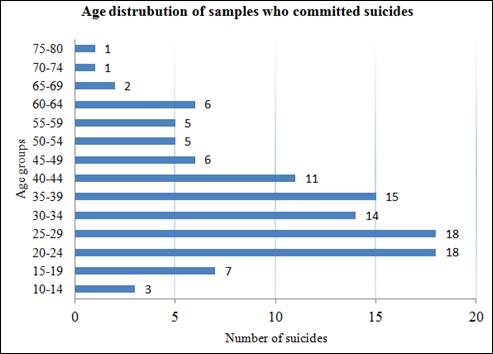 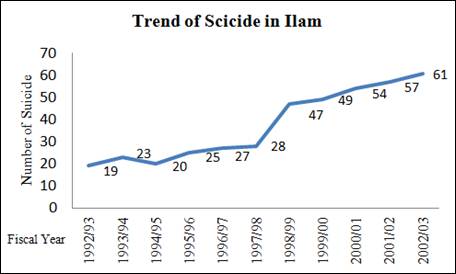 Analysis of the post-mortem reports indicated the highest proportion of indigenous janajatis (53.7%) among ethnic in Ilam. The sex ratio of female to male was 2:1. Suicide proportion was noticeable (36%) among reproductive age group (20-49 years). It was highest among the 20-29 years age group. The suicides recorded highest in Ilam municipality. The common means of suicides was hanging (71.43%). The suicides were in increasing trend over the past 11 years (1992-2003).

Suicides attribute 10-16% of maternal mortality noted in 8 districts of Nepal [14] [15]. An evidence-based review study on maternal suicides showed many homicides by husbands later claimed as a suicide to protect the husband. In western Terai of Nepal, a husband burned his wife but later the case claimed as a suicide and dismissed at all [16]. The study pointed organophosphate poisoning is common means of suicides and underlying reasons were age, chronic illness, maternal mental health, previous suicide attempt, poverty and social exclusion.

Ecological perspective is also useful to understand suicides. It suggests different layers influence an individual. These layers are the self, family, peers, school, community, culture, society and the environment [17]. Sign and symptoms of depression are noticeable and easy to recognize depressed person likely to commit suicide. But it is necessary to understand that all depressed do not commit suicides. However, depression is the most common cause of suicides and previous suicide attempt predicts high chance of committing suicide [18].

Sometime interpersonal conflict, pressure to get success, problems created by existing rules and regulation, loss of fame in the society, financial problems precipitate suicides. In that circumstance a person may feel hopeless and helpless and wants an escape through suicide [19].

The psychoanalytic theory says suicides are result of child environment by which a member of a society is likely to express violent expression either outer in the form of murder or inside in the form of suicide [20]. A study conducted in Iran showed that family factors such as family conflicts and marital problems played a role in committing suicides [21].

However, we can protect us by ourselves from within. There are protective factors that prevent us from suicides. The personal flexibility, tolerance, self-mastery, healthy family relationship, positive attitude and sense of humor encourage us to manage suicidal tendency [3].

Post mortem reports do not mention underlying suicidal causes therefore, more research on this topic attracts more researchers so that district will be able to manage proper preventive and curative measures in the mental health program.

8. Limitation of the Study

This review is based on the secondary data available in District Public Health Office and District Police Office Ilam.

In Ilam, the ethnic distribution of suicides was indigenous Janajati 53.7%, Brahmin 29.5%, Dalit 8.9% and Chhetri 8%. Sex ratio of female to male was 2:1. The mean age of suicide noticed in male 34 years and in female 35 years. Suicides from Ilam municipality, Mangalbare and Maipokhari villages recorded high. The common method of suicides was hanging 71.43%. Other means of suicides were organophosphate poison 12.5% , weapon 1.79%, fire 1.79%, fall 1.79%, and drown 0.89% noticed on the records. Suicide noticed highest among age group of 20-39 years. Suicide recorded more numbers from the municipality areas than rural villages. The trend of committing suicide in Ilam was in increasing trend over the past 11 years (1992-2003).

Nawa Raj Subba as a researcher conceptualized, conducted the review and prepared manuscript of the study.

Nawa Raj Subba has Doctor of Philosophy in Health Psychology from Tribhuvan University. He worked more than three decades in the field of public health in Nepal. He is now working as an independent researcher and consultant in universities and institutions.

The researcher is grateful to District Health Office Ilam for the cooperation in the study.