Human immunodeficiency virus type 1 (HIV-1) is the main causative agent of acquired immune deficiency syndrome (AIDS) [1]. HIV is a worldwide pandemic disease, and the number of infected peoples around the world increasing day by day. Recent estimate from World Health Organization (WHO) shows that 16.3 million people have died from AIDS since the beginning of the epidemic. Currently, around 34.3 million people alive with HIV infection, in which approximately 7% are young adults [2], infected with HIV type 1 (HIV-1) across the mucosal surfaces or by direct inoculation. The virus first attacks to dendritic cells (DCs) and subsequently spreads to cluster of differentiation - 4 (CD4+) T lymphocytes [3]. Human cytomegalovirus (HCMV) is a vernacular name of the human herpes virus - 5, a highly host-specific virus of the herpesviridae family rarely causes symptoms. The target DNA sequence is specific, located within the HCMV DNA polymerase gene, and is not homologous to other members of the human herpes virus family. The pregnant women and immune weakened persons are highly prone to acquire infection by HCMV virus. It spreads through various body fluids, such as blood, urine, saliva, semen, and breast milk. It may also causes serious morbidity and mortality in organ transplant recipients, immunocompromised, HIV infected patients and congenitally infected newborns [4]. HCMV is mainly prevalent in kidney transplant patients. The viral ‘threshold load’ is very sensitive and specific for predicting both white blood cell and platelet quantification in kidney transplant patients. The threshold value is more than 10000 copies/mL considered as HCMV infection [5]. In infected adults, HIV viral load is predictive of progression to AIDS [6, 7] and HCMV DNAaemia predicts progression to disease, particularly retinitis [8]. Several study reports have confirmed the relation between HIV-1 viral load and HCMV DNAaemia levels in terms of prediction of disease (AIDS) progression in both adults [6, 7] and children [9,10]. Researchers found an excellent correlation between two viruses i.e. HIV infected adults are highly predictable for the development of HCMV end organ disease [11]. Hence, in this experiment the dual viruses were taken into consideration as a rational. Immunomodulatory therapies are currently used against HIV-1 infections which include mycophenolate mofetil, cyclosporine, interleukin-2 (IL-2), and various vaccines [12]. Although several treatment strategie are available against AIDS patients infected by HIV-1 such as antiretroviral agents and vaccination. But some difficulties are also present. Based on above lacunas, there is a need of an alternative way which may be useful to determine the viral loads by either enhancing the application of existing agents or by means of some alternative strategy or developing new drugs. Biofield treatment is an alternative approach which may be useful to improve these unfilled space associated with AIDS infected patients. Mr. Trivedi’s unique biofield treatment (The Trivedi effect®) has been extensively contributes in scientific communities in several fields [13-16]. Therefore, authors interested, to evaluate the impact of biofield treatment on viral load in HIV and HCMV infected plasma samples.

The COBAS® amplicor HIV-1 monitor test (v1.5) is an in vitro nucleic acid amplification test approved by food and drug administration (FDA) for the quantification of HIV-1 RNA in human plasma on the COBAS AMPLICORTM analyzer. This technique is a gold standard automated solution for testing of HIV-1 viral loads in major pharmaceutical trials [17].

The COBAS® amplicor CMV monitor test is FDA approved in vitro amplification test for the quantification of HCMV DNA in human plasma on the COBAS AMPLICORTM analyzer. This is an automated, sensitive, reliable, and specific method for quantification of cytomegalo viral loads in HCMV infected patients with high productivity (600 copies/mL to 100,000 copies/mL) [18].

Viral load (Fig. 1) means the amount of HIV RNA or HCMV DNA particles per milliliter of blood sample. Higher the viral titer indicates that the immune system is failed to fight against HIV or HCMV.

The viral loads of HIV-1 and HCMV expressed as copies/ml are shown in Table 1 and 2, respectively. HIV RNA and HCMV DNA (viral load) and CD4+ T lymphocyte cell count are the two surrogate markers of HIV patients [19].

All the values are expressed as (IU/mL); Serial number 1-31 denoted as viral stock human plasma samples.

All the values are expressed as (IU/mL); Serial number 1-31 denoted as viral stock human   plasma samples.

All the values are expressed as (IU/mL); Serial number 1-5 denoted as viral stock human plasma samples.

All the values are expressed as (IU/mL); Serial number 1-5 denoted as viral stock human plasma samples

In this experiment, vial load was considered as surrogate biomarker for assessment of the impact of Mr. Trivedi’s biofield treatment. Study was carried out in total thirty one infected human stored plasma samples. The result showed that viral load of HIV RNA in infected plasma samples were reduced by 65% out of thirty one samples after biofield treatment as compared to control. In addition, viral load were increased by 32% in biofield treated group and 3% unchanged as compared to control (Figure 2A and 3). 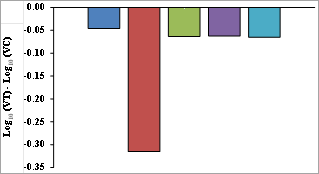 According to Greene et al. National Center for Complementary and Alternative Medicine (NCCAM), about 2000 reported that bioelectromagnetic based therapy i.e. biofield is used as an effective [20], and alternative therapy in HIV/AIDS infected patients [21]. This study findings also explored in pros of biofield treatment against HIV infections. This study further emphasized to HCMV that are responsible for progression of AIDS. Viral load quantification of HCMV DNA were determine in total five infected stored plasma samples. The results showed that viral load of HCMV DNA in infected stored plasma samples were significantly reduced by 80% after biofield treatment as compared to control. The study outcomes showed a significant improvement of biofield treatment. Besides, the viral load of HCMV DNA were increased by 0% and unable to detect about 20% in biofield treated group as compared to control (Figure 2B and 4).

Because, 20% of HCMV DNA are inactive not in multiplying state but infectious. Based on existing literatures, HCMV load in the plasma samples of HIV infected or AIDS patients is an important factor in the pathogenesis of retinitis [22]. Another study data indicates that the risk of HCMV disease and death occurs in AIDS patients is directly proportional to the quantity of HCMV DNA (viral load) in plasma, and the viral load quantification is a better predictor than CD4+ T lymphocyte count [23]. The viral particles i.e. HIV RNA and HCMV DNA those are in multiplying state, possibly affected by Mr. Trivedi’s biofield treatment. The specific frequencies of electromagnetic radiation which matches with the resonance frequencies of RNA or DNA, probably disintegrate the respective viral RNA/DNA and disrupted thus reduced the viable viral titer and vice versa [24,25]. According to a recent report regarding biofield treatment which was later approved by the German equivalent of the FDA emphasized that cancer patients have experienced healing with biofield treatment. Nowadays, many scientists and cutting edge practitioners believed that the secrets of regeneration and healing lie not only on costly medical drugs or expensive medical treatments, but also in the body’s own Quantum Energy Biofield (QEB) [26]. Mr. Trivedi’s biofield treatment has shown to improve overall productivity in the field of agriculture, biotechnology, material science and others field also, without utilization of any drugs. So, it is assumed that biofield treatment would be cost effective as compared to the existing treatment strategy.

Overall, the study data indicates that biofield treatment significantly reduced the viral load of HIV-1 and simultaneously eliminate the viral load of HCMV from infected human plasma samples. Based on the obtained results, it is presumed that biofield treatment could be novel, cost effective and an alternative advanced strategy towards AIDS patients.