A significant amount of research has been conducted recently in reviewing different HVAC systems, their energy consumption, and methods used in modeling and simulating those systems. Reviews and comparisons of modeling methods for HVAC systems have got a considerable attention [4–8]. Vakiloroaya et al. [9] focused on various strategies used in saving energy required for operating HVAC systems and they carried out a comparative study between different approaches that improve the performance of HVAC systems. Albayyaa et al. [10] compared energy consumption for Air Conditioning among various residential buildings. Their results show that modern buildings require 53% less energy compared to old buildings. Zhou et al. [11, 12] compared HVAC models in three building energy modeling programs (BEMPs). The conclusion of their work is that although the software is capable of modeling conventional HVAC systems, however, there were discrepancies in the results due to differences in input parameters and control strategies. They also found that EnergyPlus has more comprehensive component models than the other programs. Hasan et al. [13] used combined simulation and optimization for the minimization of life cycle cost of a detached house. They used the IDA ICE 3.0 simulation program and the GenOpt 2.0 optimization program to optimize five selected design variables in the building construction and HVAC system 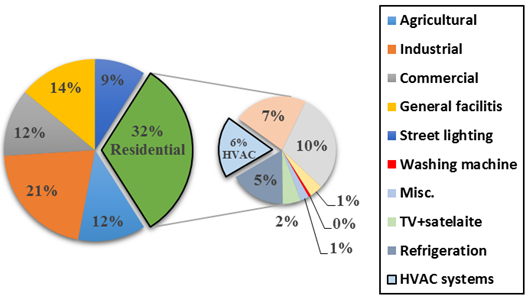 Figure 1. Percentages of electric energy consumed in Libya in 2012 [3].

The main goal of this study is to compare HVAC systems that have been used through EnergyPlus software from energy point of view. Those HVAC systems are: Ideal air loads (a virtual component is used in EnergyPlus software), Variable Flow Refrigerant, Packaged Rooftop Heat Pump, Packaged Terminal Heat Pump, and Unitary systems. The study also aims to reduce energy consumption in residential buildings due to HVAC systems and to analyze the influence of related parameters.

In this work energy consumption of HVAC systems in residential buildings has been studied. The building is located in the city of Tripoli, Libya which is described in details in next section.

EnergyPlus simulation software/engine with SketchUp and OpenStudio software were used to calculate the required cooling and heating capacity and the energy consumption of the whole building. SketchUp was used to draw and create the model geometry, while OpenStudio is used to modify model properties namely: constructions, materials, occupancy, internal loads, and schedules [19]. Then, EnergyPlus is used to perform an annual energy simulation [20, 21] in order to estimate building’s annual energy consumption. Finally, obtained results are presented in OpenStudio in SI units.

EnergyPlus carries out a zone heat balance for the load calculations. Zone heat balance calculations are divided into surface and air components. TARP and DOE-2 algorithms were selected for inside and outside surface convection, respectively, and Conduction Transfer Function (CTF) solution algorithm was chosen for the calculations of the conduction through walls [20]. EnergyPlus calculates heating and cooling loads required to maintain the zone at preset setpoints conditions and therefore calculates annual energy requirements of HVAC systems and for the entire building.

The Ideal air loads component along with four HVAC systems namely: Variable Refrigerant Flow (VRF), Packaged Rooftop Heat Pump (PRHP), Packaged Terminal Heat Pump (PTHP) and Unitary system should be modeled. The results of total energy, cooling energy, and heating energy consumption are estimated and compared. The influence of the variation of the coefficients of performance (COP) related to such systems is also investigated.

A house located in the city of Tripoli, Libya, was modeled using EnergyPlus-OpenStudio plugin. The house is a two-floor building as shown in Figure 3 with a total floor area of 280 m2 (net conditioned building area). The ground floor contains a kitchen, bathrooms, guest rooms and living area while the first floor is a sleeping floor that contains bedrooms and bathrooms. This type of houses is considered as a contemporary house widely found in Libya. 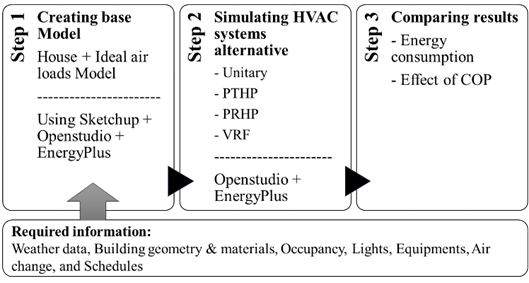 The values of the overall heat transfer coefficients of external walls, roof, windows and doors of this house are described in Table 1. 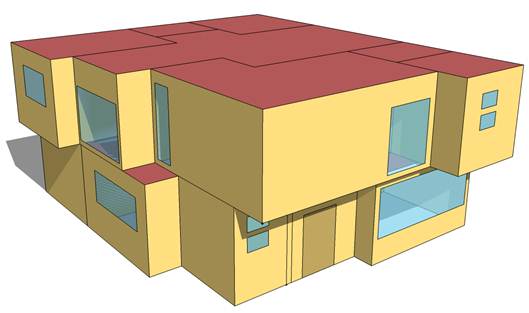 Figure 3. A three-dimensional SketchUp model of the building under study.

Some types of HVAC systems are available in EnergyPlus. These are selected for this study and they are described below. Settings and characteristics of those systems are listed within each related section. Cooling and heating supply air temperature set to be equal to 14°C and 40°C, respectively, for all studied systems, while air ventilation was set to equal to zero for all considered systems.

Ideal air loads component is a practical component built in EnergyPlus that represents an ideal HVAC system. Energy consumption for ideal loads air systems is reported in the results as district heating and cooling, and does not appear as cooling and heating loads [20].

The component is assumed to supply cooling or heating air to the related zone to meet the zone load or up to specified limits that should be provided by the user. This is usually used when users have no interest in modeling the HVAC system and plant, or do not have a good knowledge of the types of HVAC systems. That allows achieving preliminary results without neither specifying some operating parameters nor specifying certain HVAC system.

A unitary system model is defined as a single unit that coordinates the operation of HVAC components. The model used here comprises of a fan, direct expansion heating coil, direct expansion cooling coil and electrical supplement heating coil. The fan can be operated in cycling or continuous supply modes. The specification of the system is listed as follows:

Packaged Terminal Heat Pumps are through-the-wall units. They represent an easy way to heat and cool small spaces. The specifications of the PTHP model used in this study are as follows:

VRF systems are considered light weighted and flexible. Each component can be transported and fitted easily. Several modules are used to cover high loads of cooling and heating capacities. VRF systems are known for their precise temperature control. Although Coefficients of the performance of VRF systems are practically superior to those for other systems, they have been assigned the same values that assumed previously for other systems. Some of the operating parameters for the system are listed here:

The results presented below focuses on the electricity consumption by the proposed HVAC systems/models. Those models are frequently applied in simulating buildings’ annual energy consumption using EnergyPlus. 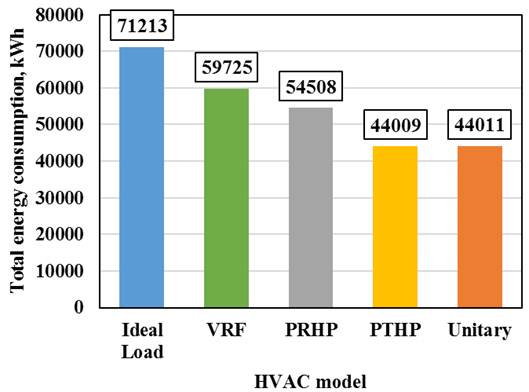 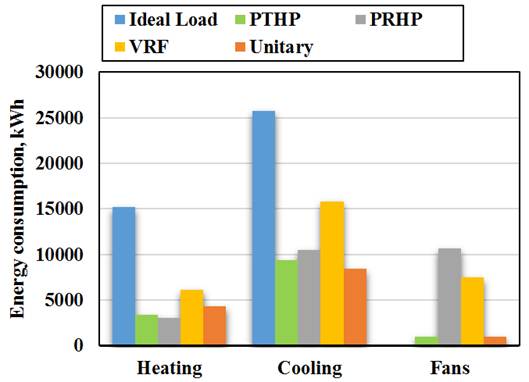 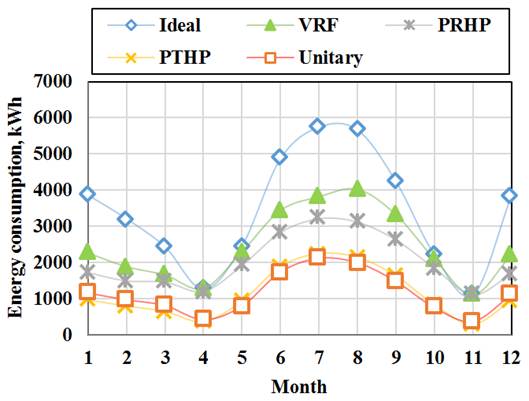 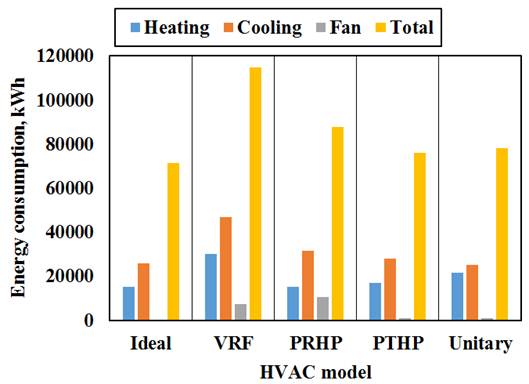 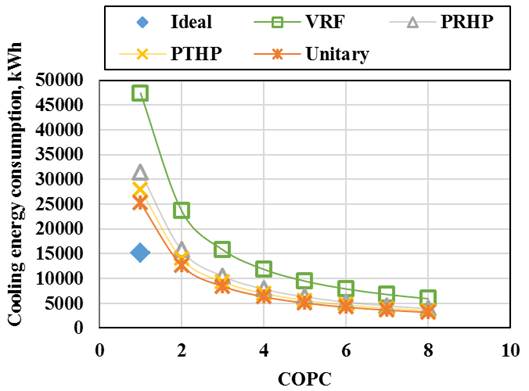 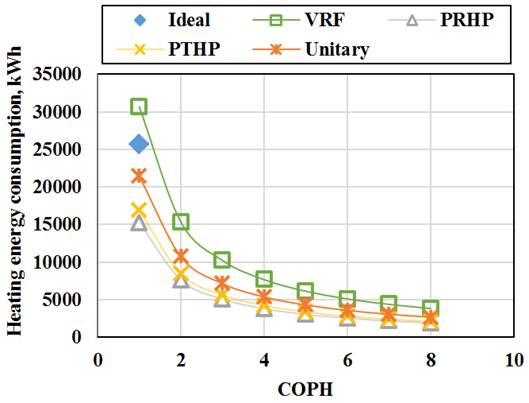 A medium size residential house in the city of Tripoli, Libya has been taken as a case study. It consists of two floors with 280 m2 area and has a total WWR of 16%. Materials and constructions selected for the residential building model that is used in this study are the most commonly used materials in Libya today.

The results showed that (1) the virtual component "Ideal air Loads" used in EnergyPlus is very easy to implement. However, it is not an HVAC system, and the resulted energy consumption is very high as reasonable values of COP are not included. Therefore, its results can be misleading when the estimation of energy consumption is needed. (2) Although central air conditioning is becoming more popular in residential and commercial buildings due to aesthetic, comfort and ease of use issues, Unitary and PTHP systems consume minimum energy compared to other systems. (3) The difference between energy consumption of different HVAC systems decreases as the coefficient of performance increases for both heating and cooling use.

The author would like to thank Eng. Mohamed Ben-Naji and Professor Elhadi Dekam from the University of Tripoli, for their kind help in reviewing this work.