Our recent research on bijective epistemology confirms time is not a 4th dimension of space and space-time model has no a counterpart in physical universe. Further on bijective epistemology denies that an "empty space" deprived of physical properties could be a medium in which run physical changes. Term "empty space" has no counterpart in physical universe, exists only as a mathematical model [1]. These results require that universal space has some more fundamental origin; in this paper is proposed origin of universal space is quantum vacuum of Planck metrics which has variable energy density. A given particle or massive body diminishes energy density of quantum vacuum respectively to the amount of its energy. Results of our recent research confirm curvature of space-time model in General Relativity is a description of energy density of quantum vacuum [2]. Our model is supported by the results of NASA research which confirm concrete universal space is not curved; it corresponds to the Euclidean geometry [3]. Considering that universal space is flat model of "space curvature" has counterpart in some ontologically deeper physical reality which is variable energy density of quantum vacuum.

In the theory of infinite numbers is known that if we say that cardinal number of natural numbers is equal to the cardinal number of real numbers, we do not enter in contradiction. If we say that cardinal number of real numbers is bigger than cardinal numbers of natural numbers, we also do not enter in contradiction. This confirms that "infinity" is not a metric term. Infinite distance plus 1000 km is still infinite distance. Considering that Euclidean space corresponds to the geometrical form of universal space we will have difficulties to approach universe as a close system which has finite amount of matter and finite diameter. It is more reasonable to study laws of observable universe which homogeneity assure that the same laws are valid in entire infinite universe.

In quantum vacuum which is the fundamental arena of the universe time has merely a mathematical existence. Past, present and future are not 4th dimension of space, they have only a mathematical existence [4]. Universe exists in what Albert Einstein use to call NOW: "…there is something essential about the NOW which is just outside the realm of science. People like us, who believe in physics, know that the distinction between the past, present and future is only a stubbornly persistent illusion" [5]. Common picture of the universe expanding in time is not appropriate, see figure below: 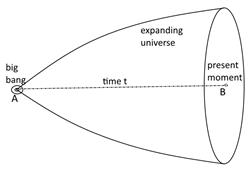 Universe exists in quantum vacuum (from now on "dynamic quantum vacuum" – DQV which is NOW. Universe is timeless in a sense that time is not a physical dimension in which universe exists. This view is also confirmed by the research of Kurt Gödel. By 1949, Gödel had produced a remarkable proof: "In any universe described by the Theory of Relativity, time cannot exist" [6].

Model of the universe where time is only a mathematical parameter of change, i.e. motion requires the re-reading of some experimental data. Considering that universe exists in physical time the interpretation that cosmic microwave background radiation (CMB) has a source 380000 years after big bang [7] makes sense because time t is a physical dimension which relates big bang (on the Figure 1 point A) with present moment (on the Figure 1 point B) in which we measure CMB; with other words time is a transmitter of CMB. Considering that universe exists in DQV which is NOW, CMB cannot have its source in some hypothetical physical past and time cannot be transmitter of CMB.

The source of CMB is present in actual universe that we observe. In this perspective also BICEP2 model of gravitational waves as ripples of space-time which have origin in big bang is questionable. Gravitational waves (if they exist) should have origin in DQV which is NOW. In our model gravity is a result of fundamental symmetry between given particle or material object and diminished energy density of DQV. Our model does not predict existence of hypothetical graviton and also does not predict existence of gravitational waves. Mass and gravity have both origin in diminished energy density of quantum vacuum caused by the presence of a given particle or massive body [8]. 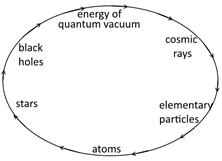 Fig. 2. Permanent circulation of energy in the universe.

In black holes singularities "old matter" is transformed into "fresh" fundamental primordial energy of DQV which is not created and cannot be destroyed. Increasing of entropy of matter that we observe in the universe does not increase the entropy of entire universe which as the whole has no entropy. Black holes are rejuvenating universe which is ageless. According to our cosmological model Universe in Dynamic Equilibrium - (UDE), universe is a non-created system.

The question of "the beginning" and "the end" of the universe seems not to be right one. In the universe galaxies, stars and planets appear and disappear; universe itself is eternal. This model of the universe has much more epistemological stability than all other models which predict beginning of the universe. Idea of the beginning comes out of human imagination that universe exists in some linear time which is physical reality. Our research confirms time we measure with clocks has only a mathematical existence; it is a numerical order of changes running in quantum vacuum. Past, present and future belong to the psychological time in which we experience flow of changes running in quantum vacuum where is always NOW [5].

3. Calculations of Density of DQV and Value of Gravitational Constant G

In the centre of black hole with the mass M of the Sun and radius r of 3000 meters density of DQV is following:

in intergalactic space far away from stellar objects can be expressed with Planck units:

is Planck mass and

is Planck time. Formalism (3) can also be written:

is Planck density. In interstellar space the value of gravitational constant

Below is calculation of gravitational constant

value in the centre of the black hole with mass of the Sun according to the formalism (5) which is valid for all stellar objects:

is the mass of the stellar object,

is distance from the centre of stellar object. When

one get value of gravitational constant in the centre of stellar object. When

one get value of gravitational constant on the surface of the stellar object. When

one gets value of gravitational constant

in intergalactic space far away from stellar objects.

is not changing. Presence of stellar objects diminishes density and energy density of quantum vacuum; however value of gravitational constant

has been measured by several groups in different places on the globe and the values are variable from 0,1% to 0,7% [11]. Results of last 30 years of measurement of gravitational constant show that there is some measurement error or either some "strange" influence is affecting most of

measurement: "The situation is disturbing — clearly either some strange influence is affecting most G measurements or, probably more likely, measurements of G since 1980 have unrecognized large systematic errors. The need for new measurements is clear"[12]. Anderson and others speculate in their article that variability of

could not have origin in changing motions in the Earth's core, or perhaps some other geophysical process: "Least unlikely, perhaps, are currents in the Earth’s fluid core that change both its moment of inertia (affecting LOD) and the circumstances in which the Earth-based experiments measure G" [13]. Our calculation of

value in the centre of black hole confirms their speculation. Motions of Earth’s core masses are much smaller than amount of masses in the black hole and cannot influence value of

Least unlikely, perhaps, as Earth is not perfectly round one could suppose that value of gravitational constant

depends on the distance from the Earth centre. Here are calculations of

on the pole and on the equator based on formalism (5):

Following calculation is about the value of

in the centre of the Earth based on formalism (5):

Calculations confirm there is no difference between the values of

on the equator, pole and in the centre.

Following calculation is about value of

20000 km above the Earth surface according to the formalism (5):

on the Earth has according to formalism (5) following value:

When Moon is at aphelion value for

on the Earth has according to formalism (5) following value:

on the Earth surface.

in last 30 years have been done at different times and on different places. We are proposing an experiment where

will be measured at the same time on different places on the Earth. According to our model values of

in proposed experiment which we plan in 2016, we can than speculate that there is (beside density of dynamic quantum vacuum) some unknown factor which influences variability of

According to the Big bang cosmological model universe has started from the infinitesimally small amount of energy which has an enormous density. Then in the first period matter and space have been created continuously. This period is called "Inflation". From where energy of matter and energy of space has been appearing Big Bang model does not explain. Stephen Hawking explains inflation period in his book "The brief History of time" with mathematics. He says that energy of matter

is positive and energy of gravity

(which is energy of space) is negative. The sum of these two energies in the universe is always zero [14]:

Hawking suggests that in inflation phase this two energies are multiplying similarly as we can multiply natural numbers and their sum remains always zero:

Validity of equation (7) does not mean that energy of matter and gravitational energy can multiply out of nothing. This explanation of inflation phase is against first law of thermodynamics has no common sense. According to bijective epistemology mathematics can describe universe and cannot explain it. Einstein use to say: "As far as the laws of mathematics refer to reality, they are not certain; and as far as they are certain, they do not refer to reality" [15].

Idea that universe is expanding makes sense only if we propose universe is finite. Only a finite system can expand. NASA results confirm universal space correspond Euclidean geometry and is infinite [3]. Infinite system cannot expand and cannot contact. Expansion of observable universe is questionable because "red shift" can also be interpreted as a consequence of light pulling from the strong gravity [16]. This so called "gravitational red shift" is a basis for "tired light" hypothesis of Swiss astronomer Fritz Zwicky. He proposed that the reddening effect was not due to motions of the galaxy, but to an unknown phenomenon that caused photons to lose energy as they travelled through space. He considered the most likely candidate process to be a drag effect in which photons transfer momentum to surrounding masses through gravitational interactions; and proposed that an attempt be made to put this effect on a sound theoretical footing with general relativity. He also considered and rejected explanations involving interactions with free electrons, or the expansion of space [17]. Considering that red shift has gravitational origin, expansion of observable universe is not certain any more.

Bijective epistemology based on bijective function of set theory fulfils Einstein’s vision about completeness of a given scientific model which requires that each element of a model has exactly one counterpart in the universe. Application of bijective epistemology in cosmology suggests that universe is a non-created system in a permanent dynamic equilibrium. Man is born and he dies. He thinks the same about universe. Our paper shows this "birth-death" approach is not applicable on the universe. Universe is a non created system in a permanent dynamic equilibrium, where time is merely a mathematical parameter of material changes.