Transparent conducting oxides (TCO) are well known for their wide energy band gap, optical transmittance and electric conductivity [1]. Due to this, TCO are utilized in solar cell, display devices, UV and optical devices [2]. Recently, antimony tin oxide (ATO), an antimony (Sb) doped tin oxide (SnO2) has gained significant attention due to their applications in transparent conducting electrodes, chemical sensors, and dye sensitized solar cell [3-7]. In ATO, the SnO2 has a rutile tetragonal crystal structure, where Sn atoms are situated at the corner and oxygen is occupying the tetrahedral interstitial sites [8]. Furthermore, Sb dopants occupy the Sn sites in the rutile structure that has been extensively studied by using Extended X-Ray Absorption Fine Structure (EXAFS) [9]. Stjerna et al. reported that the increase in Sb concentration led to increase the charge carrier concentration [10]. The presence of Sb modify the band structure of SnO­2 and form a Sb-5s like band in SnO2 [11]. Besides, for industrial applications the crystal structure properties, bonding properties, and physical properties of ATO plays a crucial role. Currently, these properties are controlled using several processes such as sol–gel [12], co-precipitation [9], combustion route [13], mechanochemical [14], laser ablation [15], and microemulsions [16] techniques. However, these process have certain limitation such as large crystallite size, non-uniformity etc. Thus, it is important to study an approach i.e. biofield energy treatment, which may be used to modify the physical and atomic properties of ATO nanopowder, when it is produced through conventional methods.

The energy exists in various forms such as thermal, electric, kinetic, nuclear, etc. It is also known that the energy can be transferred from one place to another place using several scientific techniques. Moreover, the living organisms are exchanging their energy with the environment for their health maintenance [17]. Thus, a human has the capability to harness the energy from the environment/Universe and transmit it to any object around the Globe. The object(s) receive the energy and respond in a useful way that is called biofield energy, and this process is known as biofield energy treatment. The National Center for Complementary and Alternative Medicine (NCCAM) has recommended the use of alternative CAM therapies (e.g. healing therapy) in the healthcare sector [18]. Beside this, Mr. Trivedi’s unique biofield energy treatment (The Trivedi Effect®) had been extensively studied in various scientific fields such as materials science [19,20], microbiology [21], etc. In materials science, biofield energy treatment has significantly altered the atomic, physical, structural, and thermal properties in several metals [22,23] and ceramics [24]. Thus, after conceiving the effect of biofield energy treatment on metals and ceramics, this study was designed to evaluate the effect of this treatment on the atomic and physical properties of the ATO nanopowder using X-ray diffraction (XRD), Fourier transform infrared (FT-IR) spectroscopy, and electron spin resonance spectroscopy (ESR).

The ATO nanopowder was obtained from Sigma Aldrich, USA. The nanopowder sample was equally distributed into two parts: control and treated. The control sample was remained as untreated, while the treated sample was in sealed pack, handed over to Mr. Trivedi for biofield energy treatment under standard laboratory condition. Mr. Trivedi provided the treatment through his energy transmission process to the treated sample without touching the sample. After that, the control and treated ATO nanopowder samples were characterized using XRD, FT-IR, and ESR techniques.

For, XRD study, approximately 500 mg of sample was weighed. The samples were prepared by back loading technique using sample preparation kit. In this process, the sample holder ring was fixed to the sample preparation table and the sample was spread in the holder ring in sufficient quantity to fill the ring cavity. The Phillips, Holland PW 1710 X-ray diffractometer system was used to perform the XRD analysis of control and treated ATO nanopowder samples. The data obtained from the XRD system was in the form of a table, which includes the Bragg angles, the peak intensity counts, relative intensity (%), d-spacing value (Å), and full width half maximum (FWHM) (θ°). After that, the PowderX software was used to calculate the crystal structure parameters such as lattice parameter, and unit cell volume of the control and treated samples. Also, the Scherrer equation was used to compute the crystallite size on various planes as given below:

Here, k is equipment constant (=0.94), λ =1.54056 Å, b is full width half maximum (FWHM). After that the percentage change in G was calculated using following formula:

Where, Gc and Gt are the crystallite size of control and treated ATO nanopowder samples respectively.

For FT-IR characterization, the samples were crushed into fine powder and mixed in spectroscopic grade KBr in an agate mortar. Then the mixture was pressed into pellets with a hydraulic press. The FT-IR analysis of control and treated ATO nanopowder was performed on Shimadzu’s Fourier transform infrared spectrometer (Japan) with frequency range of 4000-500 cm-1. The purpose of the FT-IR analysis was to study the impact of biofield energy treatment on dipole moment, force constant and bond strength in the ATO nanopowder.

The XRD patterns of control and treated ATO samples are shown in Fig. 1. The control ATO sample showed the intensive XRD peaks at Bragg angle 26.55°, 33.89°, 37.97°, and 51.77°, which were indexed to crystalline plane (110), (101), (200), and (211) of tetragonal crystal structure as per joint committee on powder diffraction standards (JCPDS) card no. 21-1252 [25,26]. Further, the treated sample (T1) showed the crystalline peaks, corresponding to planes (110), (101), (200), and (211) at lower Bragg’s angle as 26.49°, 33.86°, 37.93°, and 51.75° respectively, as compared to the control. However, the treated sample T2 showed that the crystalline peak corresponding to the plane (110) was shifted to higher Bragg angle as 26.58° as compared to the control (26.55°). Contrarily, the crystalline peak corresponding to plane (101) was shifted to lower Bragg angle as 33.79° in T2 as compared to the control (33.89°). Thus, the shifting of the crystalline peaks of ATO after biofield energy treatment suggested the presence of internal strain in the treated ATO samples. It was reported that the increase in lattice parameter of unit cell led to shift the XRD peaks toward lower Bragg angle and vice versa [27]. Besides, the crystallite size of control and treated samples on each crystalline plane were computed using Scherer equation and result are presented in Table 1. The data showed that the crystallite size on crystalline plane (110) was significantly reduced in the treated sample T1 (85 nm) and T2 (53.1 nm) as compared to the control (212.6 nm). Also, the crystallite size on plane (211) was altered from 65.7 nm (control) to 76.7 nm and 30.7 nm in T1 and T2 samples, respectively. However, the crystallite sizes on planes (101) and (200) were found same in both control and treated samples. It was reported that the increase in dopant concentration of antimony in tin oxide led to increase the crystallite size and vice versa [28]. Zhang et al. reported that the change in crystallite boundaries due to alteration in crystallite size affects the conductivity of ATO [29]. Thus, it is possible that the biofield energy treatment may alter the conductivity of ATO by changing its crystallite boundaries area. Furthermore, the crystal structure parameters of ATO sample were computed using PowderX software and presented in Table 2. It was found that the lattice parameter of tetragonal unit cell was increased from 4.753 Å (control) to 4.757 Å and 4.766Å in T1 and T2, respectively. The increase in lattice parameter in treated samples led to increase the unit cell volume to 7.206 ×10-23 cm3 and 7.234 ×10-23 cm3 in T1 and T2, respectively, as compared to the control (7.030 ×10-23 cm3). Furthermore, the increase in unit cell volume led to reduce the density from 7.030 g/cc (control) to 7.018 g/cc and 6.992 g/cc in T1 and T2 respectively, while the molecular weight was increased from 153.06 g/mol (control) to 153.30 g/mol to 153.89 g/mol in T1 and T2 respectively. Thus, the above results suggested that the biofield energy treatment probably acted at atomic level to cause these modification. It is assumed that the energy transferred through biofield treatment could be in the form of the neutrinos, which probably acted at nuclear level to cause these alterations. 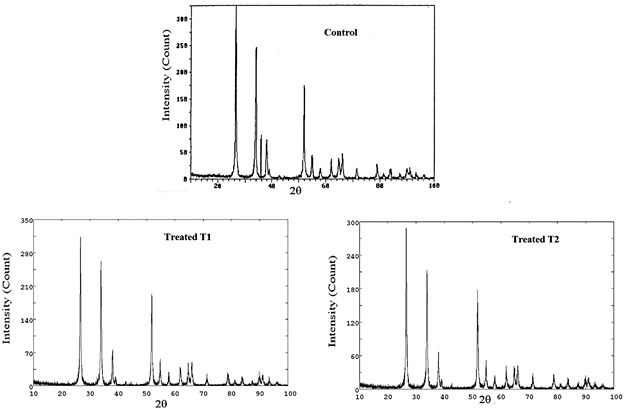 2 θ is Bragg angle, FWHM is full width half maximum of peaks, and G is crystallite size

indicated in IR spectra corresponding to the stretching vibration of a bond is directly related to the bond force constant (k) as following:

Here, μ is the effective mass of atoms, which form the bond and c is the speed of light (3×108m/s). Thus, the shifting of wavenumber corresponding to Sn-OH bond in treated sample indicated that the bond force constant of Sn-OH bond probably increased after the biofield energy treatment. Previously, our group reported that biofield energy treatment has altered the bond length of Ti-O bond in barium titanate [32]. Thus, it is possible that the energy transferred through biofield treatment probably acted on the atomic level to cause these modification in bonding properties. 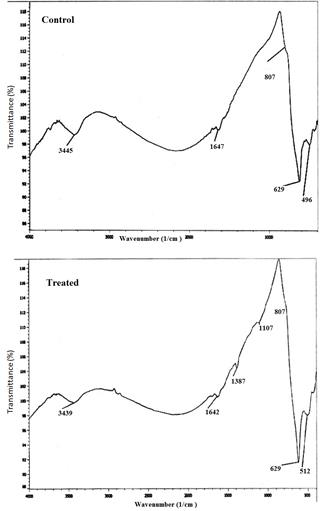 The EPR spectroscopy is extensively used to detect the presence of unpaired electrons and vacancies in the compounds. The ESR analysis result of control and treated ATO is presented in Table 3. The data showed that the g-factor of control ATO sample was found at 2.554, which was reduced to 2.008 in the treated sample after biofield energy treatment. It indicated that g-factor of treated ATO sample was reduced by 21.1 % as compared to the control. Further, in ATO, the metal atoms were in the form of Sb+5 and Sn+4, which do not have unpaired electron. Due to this, the metal cations could not produce the ESR signal. Thus, oxygen vacancy should be the only producer for EPR signals in control and treated samples [33]. Furthermore, the reduction of g-factor in treated sample indicated that the biofield energy treatment probably altered the oxygen vacancies present in the ATO sample. Thus, the alterations in the oxygen vacancies in treated ATO sample may change its conductivity. Further, it was also found that the signal intensity of the ESR peak was reduced by 70.4% in the treated ATO sample as compared to the control. Moreover, the height of the ESR signal of the treated sample was reduced by 93.7% as compared to the control. Thus, above data indicated that biofield energy treatment might alter the positions of oxygen vacancies in the treated ATO sample, which resulted into alterations in width and height of the ESR signal.

Authors would like to acknowledge Dr. Cheng Dong of NLSC, Institute of Physics, and Chinese academy of sciences for supporting in analyzing the XRD data using Powder-X software. The authors would also like to thank Trivedi Science, Trivedi Master Wellness and Trivedi Testimonials for their support during the work.