Abstract: 4-Bromoacetophenone is an acetophenone derivative known for its usefulness in organic coupling reactions and various biological applications. The aim of the study was to evaluate the impact of biofield energy treatment on 4-bromoacetophenone using various analytical methods. The material is divided into two groups for this study i.e. control and treated. The control group remained as untreated and the treated group was subjected to Mr. Trivedi’s biofield energy treatment. Then, both the samples were characterized using X-ray diffraction (XRD), differential scanning calorimetry (DSC), thermogravimetric analysis (TGA), Fourier transform infrared (FT-IR), gas chromatography-mass spectrometry (GC-MS), and UV-visible spectrometry (UV-vis). The XRD study revealed that the crystallite size of treated 4-bromoacetophenone was decreased significantly to 16.69% with decreased intensity as compared to the control. The thermal studies revealed that the slight change was observed in the melting point and latent heat of fusion (ΔH) of biofield energy treated sample as compared to the control. Maximum degradation temperature (Tmax) of treated 4-bromoacetophenone was decreased by 7.26% as compared to the control (169.89°C→157.54°C). The FT-IR spectra showed that the C=O stretching frequency at 1670 cm-1 was shifted to higher frequency region (1672 in T1 and 1685 cm-1 in T2, in two treated samples for FT-IR) after biofield energy treatment. Moreover, the GC-MS data revealed that the isotopic abundance ratio of either 13C/12C or 2H/1H (PM+1)/PM was decreased up to 9.12% in T2 sample whereas increased slightly up to 3.83% in T3 sample. However, the isotopic abundance ratio of either 81Br/79Br or 18O/16O (PM+2)/PM of treated 4-bromoacetophenone was decreased from 0.10% to 1.62% (where PM-primary mass of the molecule, (PM+1) and (PM+2) are isotopic mass of the molecule). The UV spectra showed the similar electronic behavior like absorption maximum in control and treated samples. Overall, the experimental results suggest that Mr. Trivedi’s biofield energy treatment has significant effect on the physical, thermal, and spectral properties of 4-bromoacetophenone.

4-Bromoacetophenone is basically a natural product and found in the environment as degradation products of industrial chemicals. It is used as a basic starting material in most of the metal catalyzed coupling reactions due to the presence of both electron-rich and electron-withdrawing functionalities within the same molecule [1]. In biological systems, halogen bonding has its importance due to their high directionality and specificity. Therefore, they can be used effectively in drug design to direct the binding of ligands to the target sites [2]. The bromoacetophenone derivatives upon excitation with ultraviolet radiation can generate phenyl radicals. The utility of haloarenes were studied by Paul et al., as radical progenitors for DNA cleavage. It is reported that haloarenes are readily available compounds upon UV excitation and halo acetophenones are effective DNA cleaving agents [3, 4]. 4-Bromoacetophenone has been used as basic starting material in coupling reactions such as Heck coupling, Suzuki coupling, and Stille reactions [5]. Furthermore, guaiacyl, syringyl, and p-hydroxyphenyl-type bromoacetophenone derivatives were synthesized as the starting materials for β-O-4 type artificial lignin polymers [6]. Apart from that, the acetophenones were screened for activity against positive phototaxis of Chlamydomonas cells, a process that requires coordinated flagellar motility. Several acetophenones including 3, 4-dimethylacetophenone, and 4-ethylacetophenone showed inhibitory effects on phototaxis in Chlamydomonas, in a concentration-dependent manner, indicating that these compounds nonspecifically interfere with phototaxis by disrupting overall cell viability [7].

Due to their wide range of applications in biology and synthetic organic chemistry, the objective of the current study was to evaluate the impact of biofield energy treatment on the physical and chemical properties of 4-bromoacetophenone. The biofield is defined as the complex dynamic electromagnetic (EM) field. The field resulting from the EM fields contributed by each individual oscillator or electrically charged ensemble of particles of the body (ion, molecule, cell, tissue, etc.) [8, 9]. The term "biofield" has been accepted by the U.S. National Library of Medicine as a medical subject heading [10]. The biofield, which surrounds the human body, can be harnessed from the Universe. It has been applied on materials or living things by experts in a controlled way to make the changes [11]. Mr. Trivedi’s unique biofield energy treatment is known as The Trivedi Effect® [12]. The Trivedi Effect has been applied in various research fields including microbiology research [13], agriculture research [14, 15], and biotechnology research [16]. Thus, by observing the various transformations happened due to the unique biofield treatment of Mr. Trivedi,  this study aimed to evaluate the impact of biofield energy treatment on 4-bromoacetophenone with respect to their physical, thermal and spectral properties.

4-Bromoacetophenone was procured from Loba Chemie Pvt. Ltd., India. The compound was divided into two parts i.e. control and treated. The control sample was remained as untreated and the treated sample in sealed pack was given to Mr. Trivedi for biofield energy treatment. Mr. Trivedi provided the treatment through his energy transmission process to the treated group. The control and treated samples were evaluated using various physical, thermal and spectroscopic techniques.

Percent change in various parameters in treated sample with respect to control was calculated using the following equation:

The X-ray powder diffraction studies were carried out to characterize the crystallinity of 4-bromoacetophenone using Phillips, Holland PW 1710 X-ray diffractometer system, with radiation of wavelength 1.54056 Å in the 2θ range 10°-99.99°. The crystallite size (G) was calculated by using the formula: G = kλ/(bCosθ). Here, λ is the wavelength of radiation, θ is the corresponding Bragg angle, b is full-width half maximum (FWHM) of the peaks and k is the equipment constant (=0.94).

The DSC thermogram of 4-bromoacetophenone was acquired using Perkin Elmer/Pyris-1, USA at the flow rate of 5 mL/min using closed aluminum pan to determine the melting temperature and latent heat of fusion.

FT-IR characterization was done with Shimadzu Fourier transform infrared spectrometer (Japan) with the frequency range of 500-4000 cm-1. 4-bromoacetophenone was run as pressed disks using KBr as the diluent.

The gas chromatography-mass spectrometry (GC-MS) analysis was performed on Perkin Elmer/auto system XL with Turbo Mass, USA, having detection limit up to 1 picogram. The GC-MS spectrum was obtained as % abundance vs. mass to charge ratio (m/z). The isotopic ratio of (PM+1)/PM and (PM+2)/PM was expressed by its deviation in treated samples as compared to the control.

UV-Vis spectra of control and treated samples were obtained from Shimadzu UV spectrophotometer (2400 PC) with quartz cell of 1 cm and a slit width of 2.0 nm. The analysis was done at the wavelength range of 200-400 nm.

FWHM: full width half maximum, wrt: with respect to. 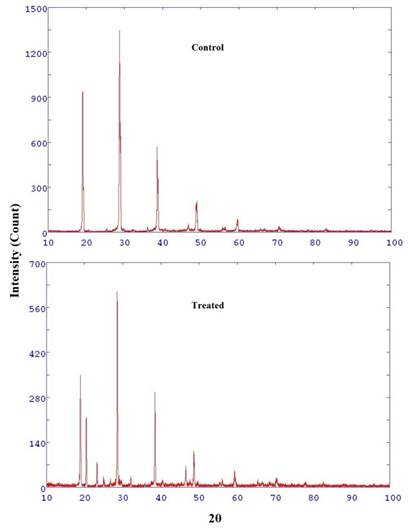 Fig. 1. X-ray diffractograms of control and treated samples of 4-bromoacetophenone. 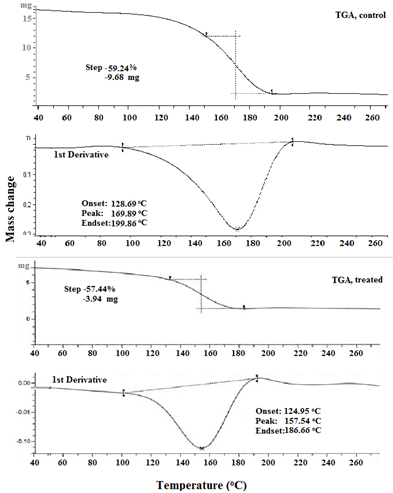 Fig. 2. TGA-DTG thermogram of control and treated samples of 4-bromoacetophenone. 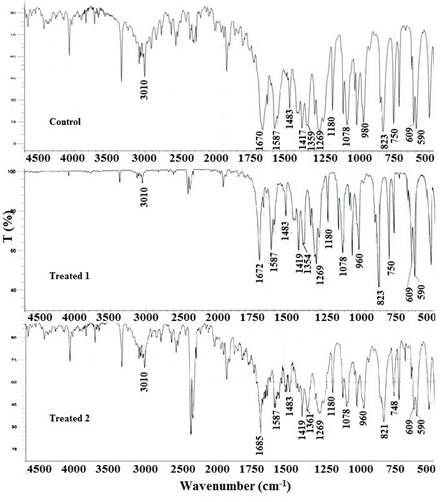 Fig. 3. FT-IR spectra of control and treated samples of 4-bromoacetophenone. 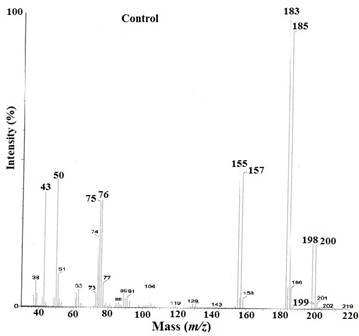 Fig. 4(a). GC-Mass spectra of control sample of 4-bromoacetophenone. 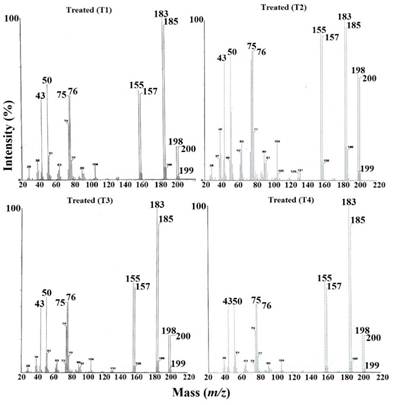 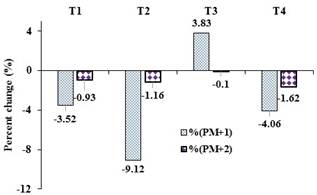 Fig. 5. Percent change in isotopic abundance ratio of (PM+1)/PM and (PM+2)/PM in treated samples of 4-bromoacetophenone. 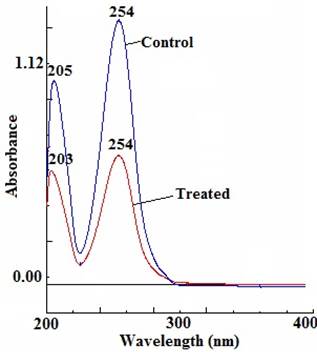 The UV spectra of control and treated 4-bromoacetophenone are shown in Figure 6. The UV spectrum of control sample showed the absorbance maxima (λmax) at 205 and 254 nm. Similarly, the spectra of treated sample showed the λmax at 203 and 254 nm. The peak at 254 nm absorption maximum in control sample did not show any shift of wavelength after biofield energy treatment. However, the peak at higher energy region showed a minor blueshift from 205 nm (control) to 203 nm (treated). The result showed that similar pattern but a minor shift of absorbance maxima was exibited by the treated sample as compared to the control. Therefore, it is suggested that the biofield treatment did not disturb the HOMO-LUMO energy gap in the treated sample as compared to the control.

The authors would like to acknowledge the whole team of MGV Pharmacy College, Nashik for providing the instrumental facility. We would also like to thank Trivedi ScienceTM, Trivedi Master WellnessTM and Trivedi Testimonials for their support during the work.