Abstract: p-Chlorobenzophenone (p-CBP) is the important chemical intermediate used for the synthesis of several pharmaceutical drugs like fenofibrate, cetirizine, alprazolam, and benzodiazepine. The aim of this study was set to evaluate the impact of biofield energy treatment on physicochemical and spectroscopic properties of p-CBP. The study was accomplished in two groups i.e. control and treated. The treated group was subjected to Mr. Trivedi’s biofield energy treatment. Subsequently, the control and treated samples of p-CBP were analyzed using X-ray diffraction (XRD), particle size analyzer, surface area analyzer, differential scanning calorimetry (DSC), thermogravimetric analysis-derivative thermogravimetric analysis (TGA-DTG), Fourier transform infrared (FT-IR), and ultraviolet-visible (UV-Vis) spectroscopy. The XRD study exhibited the increase in average crystallite size (25.93%) as well as the intensity of XRD peaks of treated p-CBP, as compared to the control. The particle size analysis showed the reduction in particle size of fine particles (≤51.49 µm) by 21.6% (d10), whereas, increase in particle size of large particles (≥433.59 µm) by 12.82% (d90) and 17.71% (d99), respectively after biofield treatment, as compared to the control. The surface area analysis exhibited the surface area as 0.7005 m2/g in control and 0.7020 m2/g in treated sample of p-CBP. The DSC thermogram of treated p-CBP exhibited the slight decrease in melting temperature. However, the latent heat of fusion was significantly altered (24.90%) after biofield energy treatment as compared to the control. TGA analysis showed the weight loss by 57.36% in control and 58.51% in treated sample. In addition, the onset temperature of thermal degradation was also decreased by 6.32% after biofield energy treatment as compared to the control p-CBP. The FT-IR and UV spectroscopic study did not show the alteration in the wavenumber and wavelength, respectively in treated p-CBP as compared to the control. Altogether, the XRD, particle size and thermal analysis suggest that biofield energy treatment has significant impact on physical and thermal properties of treated p-CBP.

Benzophenones (diphenyl ketones) are the important compounds and refer to all types of substituted benzophenone. They are widely used in organic synthesis of several pharmaceutical drugs like anxiolytic, hypnotic and antihistaminic. Benzophenone is also used as the starting material for dyes, pesticides and natural products [1, 2]. It has rose-like odor, therefore used in the preparation of synthetic perfumes. Benzophenones are used as a photoinitiator of UV-curing applications in inks, optical fibers, adhesive, coatings, and in printed circuit boards [3]. Photoinitiators are compounds, which break down into free radicals upon ultraviolet radiation exposure. The cosmetic grade benzophenone is used in sunscreen to reduce skin damage by blocking UV radiations i.e. UV-A (320-400 nm) and UV-B (290-320 nm) [4]. Benzophenones are also known to be pharmacologically active and reported as DNA photosensitizers [5]. Based on the importance of benzophenone as a chemical intermediate for organic synthesis of pharmaceutical drug. It is advantageous to find out the alternate approach that can enhance the physicochemical and thermal properties of p-chlorobenzophenone (p-CBP). Recently, biofield energy treatment was reported to alter the physicochemical and thermal properties of several metals [6, 7] and ceramics [8, 9]; and spectroscopic properties of various pharmaceutical drugs like chloramphenicol, tetracycline, paracetamol, and piroxicam [10, 11].

The National Institute of Health/National Center for Complementary and Alternative Medicine (NIH/NCCAM) considered the biofield energy therapy (therapy) in subcategory of energy therapies (putative energy fields) [12, 13]. The biofield energy treatment has been used in healing process to reduce pain, anxiety and to promote the overall health of human being [14, 15]. According to the Maxwell JC, the every vibrant process in the human body has an electrical significance that generates magnetic field in the human [16]. This electromagnetic field of the human body is known as the biofield and energy associated with this field is termed as the biofield energy [17, 18]. Prakash et al. reported that various scientific instruments such as Kirlian photography, resonance field imaging (RFI) and polycontrast interference photography (PIP) can be extensively used to measure the biofield of human body [19]. Thus, the human has the ability to harness the energy from the environment or Universe and transmit this energy to any living or nonliving object on the Globe. The object(s) receive the energy and respond into useful way; this process is termed as biofield treatment. Mr. Trivedi’s unique biofield energy is known as The Trivedi Effect®. Recently, the biofield energy treatment has been evaluated in several fields like biotechnology [20], microbiology [21, 22], material science [6-9], and agricultural science [23, 24].

XRD analysis of p-CBP was carried out on Phillips, Holland PW 1710 X-ray diffractometer with nickel filter and copper anode. X-ray wavelength used in XRD system was 1.54056 Å. The XRD diffractogram was obtained in the form of a chart of 2θ vs. intensity. The average crystallite size (G) and percent change in average crystallite size of p-CBP were calculated using the following equations [25].

Where, Gc and Gt are average crystallite size of control and treated powder samples respectively.

Where, (d10) Control and (d10) Treated are the particle size d10 of control and treated samples respectively. Accordingly, the percent changes in particle size i.e. d50, d90, and d99 were calculated.

Where, S Control and S Treated are the surface area of control and treated samples, respectively.

The control and treated samples of p-CBP were studied using a Pyris-6 Perkin Elmer differential scanning calorimeter on a heating rate of 10°C/min under air atmosphere with air flow rate of 5 mL/min. An empty pan sealed with cover was used as a reference pan. The melting temperature (Tm) and latent heat of fusion (ΔH) were obtained from the DSC curve.

The effect of biofield energy treatment on thermal properties of control and treated p-CBP were studied using Mettler Toledo simultaneous TGA-DTG. The samples were heated up to 400°C from room temperature at the heating rate of 5°C/min under air atmosphere. The onset temperature at which thermal degradation starts and percent change in temperature at which maximum weight loss occurs in sample were acquired from DTG thermogram.

FT-IR spectra of control and treated samples of p-CBP were obtained from Shimadzu’s Fourier transform infrared spectrometer (Japan) with the frequency range of 4000-500 cm-1. The analysis was accomplished to evaluate the impact of biofield energy treatment at atomic level like force constant, dipole moment, and bond strength in chemical structure [26].

UV spectra of control and treated samples of p-CBP were acquired from Shimadzu UV-2400 PC series spectrophotometer. Quartz cell with 1 cm and a slit width of 2.0 nm were used for analysis. The study was carried out at wavelength in the region of 200-400 nm. The UV spectra were analyzed to find out the effect of biofield energy treatment on the energy gap of highest occupied molecular orbital and lowest unoccupied molecular orbital (HOMO–LUMO gap) [26]. 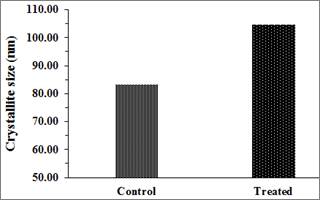 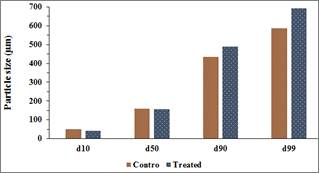 On the contrary, the d90 and d99 were found to increase up to 12.82% and 17.71%, in treated p-CBP respectively with respect to the control. The reduction of d10 and increase of d90 could be possible if fracturing and agglomeration took place simultaneously in treated p-CBP. Recently, our group reported the effect of biofield energy treatment on the particle size of manganese oxide [8]. It was described that finer particles get agglomerated after biofield energy treatment and lead to increase the percent of larger particle size. Thus, it is assumed that the energy, probably transferred through biofield treatment, might induce fracturing and agglomeration process in treated p-CBP, which resulted into alteration in particle sizes. Altogether, the result exhibited the alteration in the particle size of p-CBP after biofield treatment. 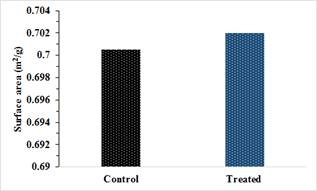 DSC analysis was performed to determine the melting temperature and latent heat of fusion (ΔH) of control and treated p-CBP. In solid substance, an ample amount of interaction force exists in atomic bonds that hold the atoms at their positions. The energy required to overcome the interaction force of phase change i.e. solid into liquid is known as latent heat of fusion. DSC thermogram (Fig. 5) of p-CBP showed the melting temperature at 77.57°C in control and 76.82°C in treated sample (Table 1).

Table 1. Thermal analysis of control and treated samples of p-chlorobenzophenone.

The decrease in Tmax of treated sample might be correlated with increase in vaporization or volatilization of treated p-CBP after biofield treatment. It might be due to alteration in internal energy through biofield energy treatment that results into earlier vaporization as compared to the control.

FT-IR spectra of control and treated samples of p-CBP (Fig. 7) were interpreted based on the theoretically predicted wavenumber. The chemical structure of p-CBP showed mainly C=O, C=C, C-C, C-H groups vibrational peaks. The aromatic C-H stretching peak was assigned at 3063 cm-1 in all three samples i.e. control and treated (T1 and T2). Likewise, the aromatic C-H in-plane deformations were attributed to peaks 1089-1145 cm-1 in control and 1089-1147 cm-1 in treated (T1 and T2) samples. The C-H out of plane deformations were observed at frequency region of 729-844 cm-1 in all three samples (control, T1 and T2). The vibrational peak of ketone (C=O) groups generally appears around 1715 cm-1 [32]. However, in p-CBP, it was appeared at 1651 cm-1in control and T2 samples, whereas in T1 sample it appeared at 1649 cm-1. This decreased wavenumber of C=O stretching in all three samples was observed due to extended resonance effect that lower the force constant and thus wavenumber of C=O group stretching. The aromatic C=C stretchings were attributed to vibrational peaks observed at 1400-1585 cm-1 in control and 1400-1583 cm-1 in treated samples (T1 and T2). Similarly, the C-C stretching peak was appeared at 1284 cm-1in control and T2 samples and at 1282 cm-1in T1 sample of p-CBP.

Overall, the FT-IR result suggests that the biofield energy treatment did not exhibit the alteration in the wavenumber of any bond in treated p-CBP as compared to the control.

The UV spectra of control and treated p-CBP are shown in Fig. 8. UV spectrum of control p-CBP exhibited the absorbance maxima (λmax) at 205.0 and 257.6 nm. A similar pattern of λmax was observed in both the treated samples (T1 and T2) i.e. at 205.0 and 257.8 nm in T1 and 203.5 and 257.5 nm in T2. Overall, the UV spectral analysis suggests that biofield energy treatment may not cause any significant alterations in the λmax of treated p-CBP samples with respect to the control. Altogether, the UV and FT-IR results, suggest that structural properties of treated p-CBP remained same as control.

Altogether, it is concluded that the biofield energy treatment has the impact on physicochemical and thermal properties of treated p-CBP with respect to the control. Based on this, it is assumed that biofield treated p-CBP could be more useful as chemical intermediate for organic synthesis of various pharmaceutical drugs.

The authors would like to acknowledge the Trivedi Science, Trivedi Master Wellness and Trivedi Testimonials for their steady support during the work. Authors would also like to thanks the whole team of MGV pharmacy college, Nashik for providing the instrumental facility.