A Self-Directed in Learning among Undergraduate Nursing Students’ in School of Nursing and Midwifery, TUMS, Tehran, Iran

Self-directed learning is materialized when learners direct, and regulate their own learning process and experience self-actualization through deciding on the materials, methods, and goals of learning. Manifestly, learning does not necessarily occur in formal, educational settings because learners can learn all by themselves in informal settings. Taking a great deal of initiative in their own learning, learners can choose learning strategies independently of their teachers. To have a developed self, it is highly recommended that learners manage their own learning process through engagement in Self-directed learning (1).As important as understanding the concept of SDL is a method of instruction used increasingly in adult education with in tertiary institution(2,3,4).SDL defines as ‘a process in which individuals take the initiative, with or without the help of others, in diagnosing their learning needs, formulating learning goals, identifying human and material resources for learning, choosing and implementing appropriate learning strategies and evaluating learning outcomes (5). There are many studies that attempted to identify the patterns which existed among the students LS and their socio-demographic characteristics (Age, Achievement, Ethnicity, Gender and Nationality)(6).

Dynan and his colleagues (2008) found that courses which were de­signed to enhance student readiness for self-directed in learning could in fact do so. Their students, like many others, entered courses unprepared for engagement in self-directed learning (SDL). However, when students mod­eled professor inquiry in a structured learning environment, their readi­ness for self-directed learning improved. The finding was indicated that "skill of self-direction in learning is one that is essential for students and workers to remain lifelong learners" and "it is, at least in part, up to professors to encourage and develop this skill in their students so that they will be equipped for educational opportunities and challeng­es beyond their formal education"(7).In few literatures, SDL is characterized by a proactive approach to learning where individuals take responsibility for identifying necessary learning resources and implementing strategies appropriate for their goals(4,7). Self-directed learning is a method of instruction used increasingly in adult education and it is needed for nursing students, to be prepared for present challenges in the healthcare system(8). Self-directed learning includes the dimensions of self-management, self-monitoring and motivation. Self-management describes a learner setting goals and managing available resources and support. Self-monitoring encompasses cognitive process required to construct individual meaning of new concepts (9,10,11,12). The purpose of this study was to determine the self-Directed in Learning among undergraduate nursing students.

This study was conducted in school of Nursing and Midwifery, Tehran University of Medical Sciences, Tehran, Iran. The school of nursing and Midwifery is proud of its 70+ year history of education and pioneering position in research. Established in 1936, this school has always been one of the strongest schools in nationally and regionally. With more than 1471 undergraduate and graduate nursing and midwifery students,83 faculty members and presenting top alumini at all levels, the influence of this school in Virtually all National and regional nursing and Midwifery events is undeniable. The study was conducted in 232 randomly selected under graduated Nursing students from Jan, 2013 up to March, 2014.

A cross-sectional descriptive study design was used for documenting the self-directed in learning among undergraduate nursing students’ in TUMS, Tehran, Iran.

Sampled undergraduate nursing students were attending at School of nursing and Midwifery, Tehran University of Medical Sciences, Tehran, Iran prior to the study. The study population consisted of all undergraduate nursing students who attended at the school of nursing and midwifery and they can fulfill the criteria for inclusion was enrolled in the study.

The sample size was calculated using employing stratified population in order to determine statistical formula. When n=Sample size with finite population correction, Z1-α/2=the standard normal variables at (1-α) % confidence level and α=5%with 95% confidence interval level=1.96, S=Standard Deviation, and d=is margin of the sample error to be tolerated/precision/length (in proportion of one) of maximum error = 0.8). (13). the study was included at least 221 students, then the total students who enrolled at study area is 743 nursing students. The required sample is obtained and with 5% non-response rate of total were calculated 232 were obtained.

A Quota Stratified Sampling Techniques (QSST) was employed. In School of Nursing and Midwifery, Tehran University Of Medical Science, there are more than 1471 undergraduate and graduate nursing and midwifery students,83 faculty members and presenting top alumini at all levels, the influence of this school in Virtually all National and regional nursing and Midwifery events is undeniable. All undergraduate nursing students from the total number of students about 232 were selected. Total undergraduate nursing students in the school from 2009-2013 were about 743 persons. Regarding the sampling technique, study group from the source of population were choices for each academic year of the nursing study (Year 1-4): Year1 (67), Year 2(69), year 3 (65), and year4 (31).

The questionnaire was developed and pretested among small number of non-sample group nursing students in the school of nursing students in the school of nursing and Midwifery, TUMS, Tehran, Iran. Before pretesting, the research team discussed the instrument to make sure that all involved in data collection understood and were acquainted with the instrument. The instrument was revised based on the issues identified by the team. The improved version of the instruments was used for pretesting exercise. The investigator also was carried out pilot study to ensure content and face validity. The data of the questionnaire from the pilot group was processed for determining an internal consistency reliability for coefficient, The alpha Cronbach’s value of 0.98 indicated a high reliable of the questionnaire to determine the relationship between self-directed in learning and socio-demographic characteristics among undergraduate nursing students academic achievement. Both pretesting and actual data collection were conducted in local language commonly spoken in the study area (Persian language-Farsi).One Female trained research assistant who is an instructor at School of Nursing and Midwifery, TUMS, Tehran, Iran, was recruited and assisted the researchers in collecting data for the study .All ethical considerations were applied in this study. The time which allowed filling all questionnaires for one participant was 30 minutes but they could take more time.

The completed of the questionnaires were serially numbered for control and recall purposes. Data collected was checked for completeness and accuracy on a daily basis. They quantitative data collected was collated and screened for completeness; Socio-demographic characteristics and learning style section were scored and entered into computer. The statistical package for social sciences (SPSS) version 21 was used for the analysis of data. Descriptive statistics, chi-square and T-test were used. Frequencies were generated and a variable was cross-tabulated. The level of significance for the study was considered P <0.05.

To ensure the quality of data, first the questionnaire was pretested. The pretested was conducted in 5% of the participants at randomly selected undergraduate nursing students in School of Nursing and Midwifery, Tehran University of Medical Sciences, Tehran Iran. The training was given for the data collectors and supervisor before the actual data collection. Every day after data collection, questionnaires were reviewed and checked for completeness, accuracy and clarity by the supervisors and principal investigator.

The emotional condition of responders can affect their answer to the study questionnaires; the researcher could not control that situation.

Table 1. Distribution of SDL in students.

This table reveals that the majority of subjects (57.9%) were female who have higher level of SDLR than male.However,the proportion of high SDLR did not show any significant variation with all sociodemographics of the students.

Table 2. students’ Self-directed learning according to some of socio-demographics characteristics. 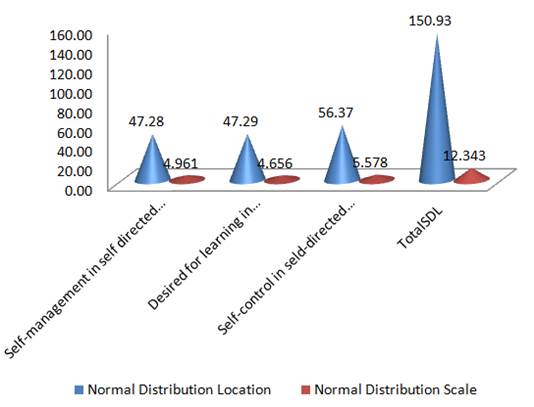 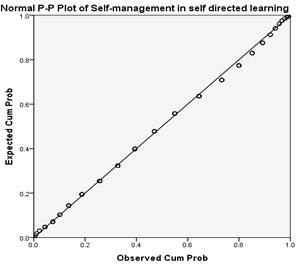 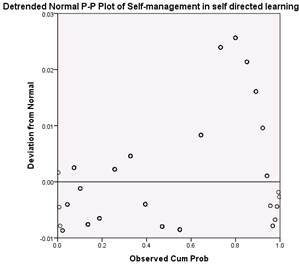 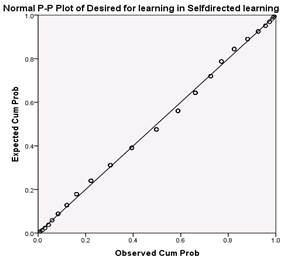 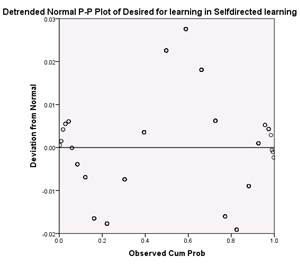 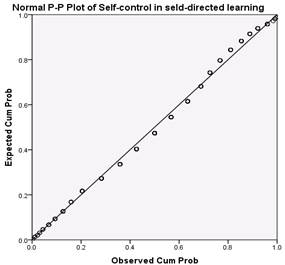 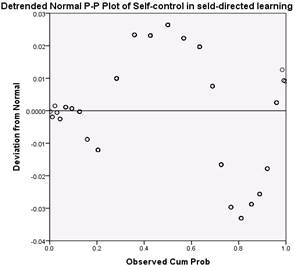 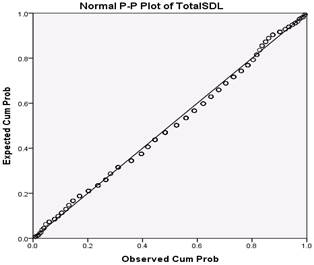 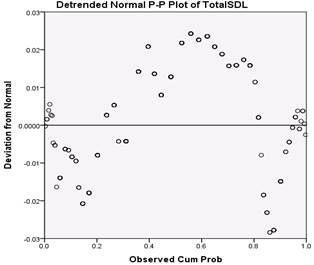 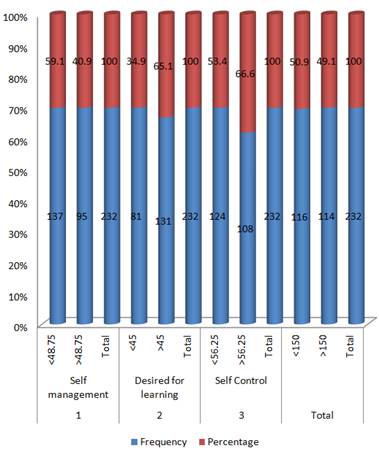 Figure 3. Number and percentages of the participants categorized according to classification of self-directed in learning, Tehran University of Medical Sciences, Tehran, Iran.

This is the first study which conducted among undergraduate nursing students’ SD in Learning in school of nursing and midwifery of TUMS. More research with larger groups is needed to generalize this result. Despite the lack of statistical significance in the relationship between self-directed learning and their demographic characteristics in this study, there are several important findings that deserve future research. Researchers need to consider more effective means of assessing nursing students’ SDL so that a higher response rate can be seen and the finding can also be achieved. The variables that were found to have statistical significance should be examined further. Self-directed learning is a method of teaching and learning increasingly used in nursing education, and the result of assessing SDLR is useful for educators to select appropriate teaching and learning methods for their students. The present study revealed that the overall SDLR of participants was at a high level. In order to implement this method at the Department of medical surgical nursing, it was important to assess SDL readiness of students. Data from this study can be used to further develop SDL in nursing students and to improve teaching and learning methods. Further research should follow the development of nursing students’ SDL abilities over their academic years as well as their lifelong careers in Iran.

• Educate all students who are attending universities, college and any higher educational level about the main purpose and importance of SDL.

Conduct a study using Fisher’s-SDLR with full permission in place of SDL which has been developed for the nursing profession. The main recommendation is to repetition of this study with a larger sample size. Conducting action research that would apply specific techniques to target diverse perspectives, communication with faculty and peers, asking questions in class, class discussions, and perceived difficulty of course work, and preparation for class is recommended.