34 years old, neither diabetic nor hypertensive, she is gravida III, para I, came for first ultrasound scan with amenorrhea for four months. The ultrasound scan shows single viable fetus, gestational age was 19 weeks + 5 days, with enlarged highly echogenic kidneys, the head shows posterior cranial defect with protrusion of brain tissues encephalocele. The fingers were not clearly seen because of hydramnios. The conclusion is Meckel Gruber syndrome (FIG 1, 2 and 3).

Dysplastic kidneys are prevalent in over 95% of all identified cases. When this occurs, microscopic cysts develop within the kidney and slowly destroy it, causing it to enlarge to 10 to 20 times its original size. The level of amniotic fluid within the womb may be significantly altered or remain normal, and a normal level of fluid should not be criteria for exclusion of diagnosis.

Occipital encephalocele is present in 60% to 80% of all cases, and post-axial polydactyly is present in 55% to 75% of the total number of identified cases. Bowing or shortening of the limbs are also common.

Finding at least two of the three phenotypic features of the classical triad, in the presence of normal karyotype, makes the diagnosis solid. Regular ultrasounds and pro-active prenatal care can usually detect symptoms early on in a pregnancy.

Meckel Gruber Syndrome is an autosomal recessive lethal malformation. Recently, two MKS genes, MKS1 and MKS3, have been identified. A study done recently has described the cellular, sub-cellular and functional characterization of the novel proteins, MKS1 and meckelin, encoded by these genes [9]. The malfunction of this protein production is mainly responsible for this lethal disorder. Recent findings in genetic research have suggested that a large number of genetic disorders, both genetic syndromes and genetic diseases, that were not previously identified in the medical literature as related, may be, in fact, highly related in the genetypical root cause of the widely varying, phenotypically-observed disorders. Thus, Meckel–Gruber syndrome is a ciliopathy. Other known ciliopathies include primary ciliary dyskinesia, Bardet–Biedl syndrome, polycystic kidney and liver disease, nephronophthisis, Alstrom syndrome, and some forms of retinal degeneration. The MKS1 gene has been explicitly identified as a ciliopathy [10].

Antenatal ultrasound, in addition to demonstration of the classical features such as an occipitalencephalocoele, multiple renal cysts and polydactyly, there may be evidence of oligohydramnios (or anhydramnios in severe cases) and microcephaly). In utero (and early neonatal life) multicystic renal disease is usually evident as enlarged echogenic kidneys: demonstration of physical cysts within the kidneys only occurs in the minority of cases [14].

The differential diagnosis will depend on the type of the anomalies. Due to several sonographic similarities between these conditions, Trisomy 13 must be excluded by karyotype. Another possible differential diagnosis is autosomal dominant polycystic kidney disease. The constellation of possible anomalies associated with this syndrome is extensive. In some situations, such a wide phenotypic variation makes the recognition of the disease more difficult [15].

An association of Meckel Gruber syndrome with Rokitansky syndrome and short limb dwarfism has been reported in literature. Other inconstant features include fascial cleft, microcephaly, cerebellar and cerebral hypoplasia, hydrocephalus, sloping forehead, congenital heart disease and pulmonary hypoplasia. Association genital anomalies in males are hypoplastic penis, cryptorchidism, Mullerian duct remnants and epididymal cysts, while septate vagina and hypoplastic or bicornuate uterus may be the associated anomalies in females. However, Meckel Gruber syndrome may demonstrate variation in phenotypic expression when some malformations are different from those traditionally accepted and cases may be evaluated as a different syndrome [16]. We were able to make the diagnosis of Meckel Gruber syndrome at 11 weeks and 6 days. As it is possible to diagnose most cases of Meckel Gruber syndrome at this early gestation, provided that a careful systemic survey is included routinely as part of 11 to 14 weeks scan. It is in fact easier at this stage, as in the presence of oligohydramnios in the second trimester could easily cause encephalocele and polydactyly to be missed. Whereas, early in pregnancy the diagnosis is greatly facilitated by the fact that the amount of amniotic fluid is not affected by the renal anomaly [17]. 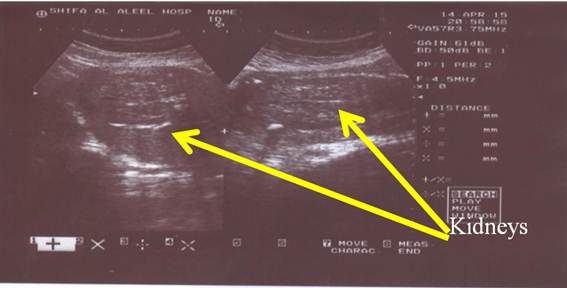 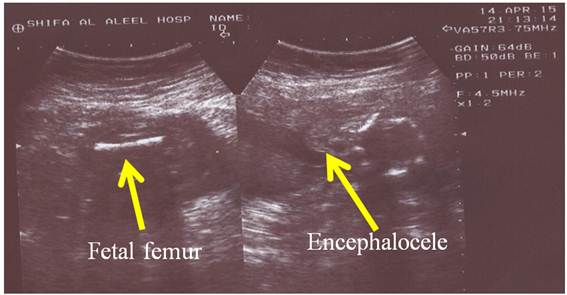 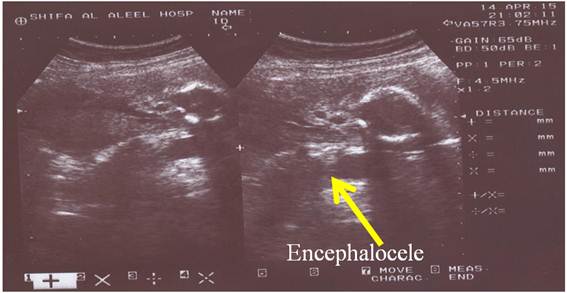