Abstract: Glucan is the most studied immunomodulator. Among its properties, effects on cancer are the closest to clinical use. In our study, we evaluated the effects of short-term supplementation with glucan on NK cells in patients recovering from different types of cancer treatment. NK cells represent a distinct sub-population of lymphocytes endowed with the capacity to kill tumor cells without prior sensitization and form one of the most important defense mechanisms against cancer. To measure the numbers of NK cells, flow cytometer measuring four colors was used. Using a double-blind, placebo-controlled clinical trial, we found that adding glucan to the diet strongly increased the number of NK cells in blood.

Natural killer (NK) cells form app. 5 to 12% of peripheral blood lymphocytes. These cells represent the first line of defense against infections with the strong ability to spontaneously kill virus infected and cancerous cells.1 In addition, their ability of immunoregulation has strong effects on adaptive immunity.2 The functional activity of NK cells is regulated via their receptors which are able to activate and inhibit ligand recognition. NK cells can form anti-inflammatory conditions and are defined by three characteristics: lymphoid morphology, lack of activation recombinant gene and expression of myeloid markers such as a CD56 molecule with a subgroup CD56dim NK with an ability to express a CD16high NK marker. CD56 markers are expressed by additional cells, such as NKTS, dendritic cells and monocytes.3 Recent studies suggested that failures in NK cell functions are connected with higher disposition or formation of autoimmune diseases.1 Immune and cancer cells are closely related and significantly affect each other. On one hand, immune cells can suppress the growth of cancer cells, on the other hand cancer cells can bypass defense mechanisms of the immune system via several modulators. Cytotoxic mechanisms of NK cells represent secretion of perforins and granzymes and their activation is regulated by IL-15. Detailed understanding of molecular mechanisms regulating NK cell activity is necessary to fully use targeted immunotherapy of cancer.4

The immune and central nervous systems closely communicate. There are two ways the central nervous system stimulates psychogenic stress. The first employs hypothalamic-pituitary-adrenal axis, resulting in cortisol production, the second uses the sympathetic nervous system with subsequent release of catecholamine (noradrenalin and adrenalin). These neuroendocrine stress systems coordinate response of additional physiological mechanisms, including immune mechanisms.5 It is well known that fatigue caused by cancer growth does not adequately react to prescribed antidepressive medication.6 This type of fatigue, commonly named cancer related fatigue,7 is influenced and significantly started by chirurgical treatment and subsequent chemotherapy and/or irradiation. In addition, the effects of the environment (such as aggressivity of surrounding persons, depression or loneliness) after the end of the treatment strongly influences cancer related fatigue.8

Cancer related fatigue was a dominating diagnosis in all our patients who finished cancer treatment.7 This fatigue was accompanied by mild inflammation, nutritional imbalance and most of all persistent stress. As glucan is well-established immunomodulator, we decided to test the effects of glucan supplementation on NK cell levels in patients with cancer-related fatigue. From the whole spectrum of immunological tests performed in these patients, our paper is focused entirely on NK cells, where significant effects have been found.

A randomized, double-blind, placebo-controlled trial compared b-glucan #300 and a placebo in patients at the end of complex treatment of cancer disease. We evaluated 36 patients 2 to 6 months after the end of either chirurgical, chemotherapeutical or radiation therapy of cancer. All patients were diagnosed as potential immune deficiency and were showing strong fatigue, subfebrile stages, and additional clinical problems (rhinopharyngitis, pharyngitis etc.). All patients were fulfilling all conditions for a fatigue syndrome diagnosis based on the International Case Definition criteria with Cancer Related Fatigue criteria. All patients were tested for comorbid health state, possible effects of medical treatment, and psychological factors such as depression and anxiety. Subjects were randomly assigned to groups which were blinded to the intervention. During the intervention period, the subjects consumed 200 mg/d of β-glucan or placebo for 60 days. The glucan and placebo capsules looked identical. Subjects were routinely evaluated by the medical staff. At the end of the study, we again performed the full immunological evaluation, including native and acquired immunity. After elimination of patients, which did not finish the food supplementation or did not arrive for the final evaluation, we evaluated 10 patients in the placebo-supplemented group with an average age 60.75 (56 to 83) years, and 26 patients in the glucan-supplemented group with an average age 60.75 (43 to 79) years. For our study, we used patients diagnosed with either breast (females), prostate or gastrointestinal (males) cancer. The glucan group involved 16 females and 4 males, the placebo group consisted of 10 females and 6 males.

This study was performed in agreement with the Helsinki declaration (revised version 2000.09.01) and in full compliance with the rules for clinical testing in the Czech Republic. All patients were fully informed about the goals of the study and their consent was given in all cases.

Statistical significance was evaluated by a Wilcoxon paired t-test using a GraphPad Prism 5.04 software (GraphPad Software, USA). Statistical significance between individual groups used a P < 0.05 level. The results represent mean and SD. The assumption that the differences are sampled from a Gaussian distribution was tested using the Kolmogorov-Smirnov distance test. 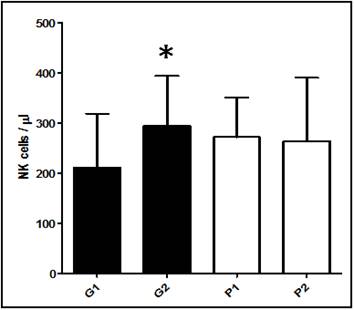 Our previous work was devoted to the possibility of positively influencing some immune mechanisms in patients suffering from cancer related fatigue.7 The relation between cancer and fatigue is well established as well as the positive effects of glucan treatment in both experimental and clinical models of cancer. The aims of this study was to evaluate the hypothesis that glucan supplementation might influence the NK cells in patients with cancer-related fatique. This study clearly demonstrated the positive effects of short-term glucan supplementation on post-surgery and the rehabilitating phase of patients overcoming cancer disease. The connection of the fatigue syndrome with problems of immune system and with lower activity of the hypothalamic-pituitary-adrenal axis is well established.9-11 Our working hypothesis is the possibility to use noninvasive methods to influence both the immune system and neurocrine system which might help to understand the interaction among these two systems and its significance for the development of fatigue syndrome.

In our study, we found a significant difference in the numbers of NK cells at the start of the study, and both groups were statistically identical. We cannot completely disregard the possibility of a placebo effect, as we did not include the third group (non-placebo control).

Medical treatments of cancer cause significant changes in physiological mechanisms. In the immune system, the most affected part is the hematopoiesis with resulting suppression of number of immune cells.12 It was found that glucans stimulate chemotaxis and adhesion of neutrophils, have synergistic effects with myeloid growth factors and mobilize progenitor cells resulting in regeneration of hematopoiesis.13-18 In mice and monkeys treated with either myelosuppressive or myeloablative doses of cyclophosphamide, prophylactic administration of glucan accelerated the recovery of peripheral blood cells19 and the number of bone marrow cells with chromosomal aberrations.20 Our previous studies revealed that 60-day treatment with glucan had positive effects on hematopoiesis in patients after cancer treatment.21 Since glucan is nearing use in clinical practice, attention has returned to the potential role in implementing changes in the hematopoietic system and more and more studies describe positive effects of glucan in cancer treatment.22-26

The positive effects of glucan supplementation are well established with over 8,000 published studies. This knowledge results in more and more common use of glucan in prevention and the direct treatment of many diseases. Glucans have stimulating effects on both nonspecific and adaptive immunity. These effects also include positive improvements of health conditions in people with high physical activity and stress.27 Glucans are tested for use in cancer treatment, which is based not only on hundreds of animal studies, but also on the fact that in Japan, glucan has been used in treatment of gastrointestinal cancer since 1983.28 Beside direct palliative effects, glucan is also evaluated for application in cancer patients undergoing chemotherapy, where glucan has repeatedly shown to have significant positive effects on hematopoietic recovery.13,14 Our group also found positive effects of glucan on hematopoiesis.7 Radioprotection of lymphocytes by glucan resulting in protection of stability of the whole spectrum of lymphocytes was reported.17 Some studies suggested that the effects vary based on the biological variability of glucans caused by their source,23 therefore it is imperative to pay attention to the quality of glucan.29 It is known that the biological effects of glucan are influenced not only by its purity, but also by physicochemical characteristics, and size. Some studies suggested that high molecular weight glucans are more effective than low molecular weight glucans.23 On the other hand, small synthetic glucan-based oligosaccharides have at least as good activity as native glucans.30, 31

In the first periods of chirurgical, chemotherapeutical or radiation treatment, we routinely observed unexplained periodic increases in temperature. It is extremely difficult to better characterize these clinical cases, but is absolutely necessary for the differential diagnosis leading to the prognosis of health of these patients. With the higher age of our patients, we can expect a wide spectrum of clinical symptoms where this autoinflammatory syndrome can occur.

The role of NK cells in anticancer response is well documented.3, 21, 22 Based on these data, we can now evaluate not only the ways to activate them, but also how to use them in therapy. Detailed information of molecular mechanisms controlling NK cell activity will offer novel approaches to cure cancer.13 To achieve this goal, we need to get better knowledge of a NK cell – cancer cell interaction. One of the results of this interaction is development of immunosuppressive conditions, affecting T lymphocytes3 The ability of NK cells to help in breast cancer treatment and the stimulation of NK cell activities by glucan are the focus of both experimental and clinical studies.22, 32-34 Our clinical study confirmed that it is possible to influence the quality of cellular immunity by glucan supplementation. We conclude that glucan treatment has positive effects on immunoregulatory activities, particularly on adaptive immunity.