Clinical Significant Effect of Chloral Hydrate: Diazepam Combination in the Induction of Sedation During Auditory Brainstem Response in Children with Hearing Loss

Hearing loss is the most common sensory disability in the world, about 270 million people in the world are associated with hearing dysfunctions either conductive or sensori-neuroal hearing disorders [1]. Hearing loss should be early diagnosed and treated since; it lead to speech and language disorders that may cause communication and educational disorders which may lead to psychological impact, social stigmatization and social withdrawal [2]. Therefore, general screening test for hearing loss is recommended either by automated oto-acoustic or auditory brain stem evoked potential for assessment of auditory function [3,4].

Auditory brainstem response (ABR) or Auditory evoked potential (AEP) is a neurologic test done by an audiologist or an electrophysiology technician to measure auditory evoke potential taking out from on-going brain electrical activity and documented by electrodes placed on scalp and done while the person is sleep or at a complete rest. This test is an exogenous response which depends on external factors. It’s first described in 1971 by Jewett and Williston. The ABR test gives information about brain pathway for hearing and inner ear (cochlea) [5,6].

Chloral hydrate is an anxiolytic, sedative and hypnotic agent not related to opiate or benzodiazepine classes, chloral hydrate also called (chloral) is an organic compound with the chloride atoms that increasing the lipid solubility and CNS depressant effects, it is formulated as a hydrate to improve the stability, chloral hydrate has central nervous system (CNS) depressant effects by its active metabolite (trichloroethanol), that enhances the gamma amino butyric acid (GABA) receptor complex and activated chloride current thus; uses of flumazenil in a case of chloral hydrate intoxication, which is a GABA antagonist, pointed to the possible action of chloral hydrate at GABA level [12, 13]. On the other hand, diazepam is a long acting benzodiazepine with anticonvulsant, anxiolytic, sedative and muscle relaxant properties [14], it bind to benzodiazepine receptors which are coupled to Gamma-amino butyric acid-A (GABA-A) receptors (which are ligand-gated chloride-selective ion channels that are activated by GABA, this increase the affinity of GABA to the GABA receptor. Binding of diazepam to its receptor encourages the binding of GABA to GABA receptor that increase chloride ions conduction across neuronal cell membrane; led to hyperpolarization of neuronal membrane potential [15].

Therefore, the aim of present study was evaluation of the sedative effect of chloral hydrate during auditory brainstem response (ABR) on children with hearing problems.

The study was conducted in Department of Clinical Pharmacology, College of Medicine, Al-Mustansiriya University in cooperation with ENT unite in Al-Yarmook teaching hospital. This study was approved by the specific Scientific Jury and Ethical Committee in the medical board college of medicine, Al-Mustansiriya, all of enrolled participants gave informed verbal consent from their parents for their participations in this study. Randomized selection of 160 children with age ranged between 1-5 years, the children have no history of any acute or chronic somatic or psychological diseases and not take any medication during this study.

An inclusion criterion includes physical state class 1 or 2 according to American society of anesthesiologists (ASA) [16], age between 1-5 years, have not been taken sedative or hypnotic agent within 48hrs and have not been diagnosed with gastritis, chest infection or any other serious systemic disease.

Participated children were divided equally and randomly into 4 groups, 40 children in each group and assigned as A, B, C, and D.

All children were prepared by give their parents specific instructions like weak up the child early and don’t let him sleep until the time of test, simple breakfast should be taken, avoid drinking through the last 3 hour before the test.

Any child not reaches adequate sedation level within 30 minute after drug administrations; we give him additional dose of chloral hydrate as half of the initial dose.

After sedative agent have been given (chloral hydrate alone or in combination with diazepam), Ramsey sedation scale was used for assessment of the sedation levels within 10 minutes. Ramsey sedation scale (RSS) [17] is scale used to test the arousal and vigilance status; RSS have six different levels according to the patient arousal level these are:

• Level I: Patient is anxious and agitation or restlessness or both.

Analysis of data was carried out by using of SPSS-22 (Statistical Packages for Social Sciences- version 22). Data were presented as simple measures of frequency, percentage, mean and standard deviation. The significance of difference of different means was tested using ANOVA test for the difference among the independent means. Statistical significance was considered when the P value was < 0.05.

In the present study, 160 children out of 184 completed ABR tests since; 24 children were excluded, and they were randomly divided in to four groups regardless of age, gender, weight, family history and drug allergy, figure 1.

Results are presented as mean ±standard deviation and number

Regarding the total times (in minutes) spent at ABR centre for each child [from reach the centre till discharge it was significant; in group A (100.58±7.42 min) and in group C (96.66±5.16 min) completed ABR test significantly figure 3.]

3.2. Sedative Effect of Chloral Hydrate Alone or in Combination with Diazepam 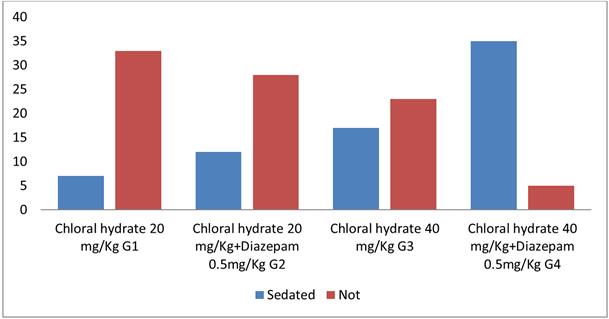 Figure 4. Numbers of children sedated in each group.

Table 2. Variations in ABR test variables among the treated groups.

The present study showed significant sedative effect of chloral hydrate during auditory brainstem evoke potential at a low dose 20 mg/kg and high dose 40 mg/kg, low dose of chloral hydrate required re-dosing 100% whereas high dose of chloral hydrate required re-dosing 87.5% for reaching a full sedation as revealed by Koo et al, study that demonstrated an initial dose of choral hydrate (48±2) mg/kg was not harmfully affect the sedation level or the requirement for extra-dose during ABR testing [18]. Also, 80.8% of sedated children completed ABR testing without any complications therefore; chloral hydrate is regarded as reliable sedative agent [19]. Furthermore, re-dosing of chloral hydrate was more required in children receiving 20 mg/kg than children that received 40 mg/kg for reaching the adequate sedation during ABR testing; the cause of choral hydrate re-dosing was the low dose of choral hydrate in order to reduce of adverse effects since; choral hydrate is linked with significant serious side effects [20]. Also, the difference was significant in the numbers of non-sedated children that received a low dose of chloral hydrate; this fail in reaching the sedation level for ABR test was due to the low doses of chloral hydrate that was used or due to other factors that reported by Keidan et al, study that demonstrated children anxiety, fasting and rapid sedation procedure may affects the initial sedation [21]. The mechanism of sedative effect of chloral hydrate may be due to its active metabolite that augments GABA-receptor complex which activates chloride current, augment acetylcholine effect at neuromuscular junction, potentiating 5-HT3 at ganglion neurons and intensification of GABA effect on the duration and amplitude of GABA-A receptors at hippocampal neurons [22-24]. Additionally, chloral hydrate and its active metabolites enhanced GABA currents at hippocampal neurons only when GABA activity and concentration is low thus; a chloral hydrate effect on GABA activity wasconcentration dependent [25]. Indeed, the precise effect of trichloroethanol is mainly on chloride channel since bicuculine (chloride-channel antagonist) block trichloroethanol effects regardless of GABA concentration [26]. On the other hand, trichloroethanol inhibits NMDA receptors in different manner [27].

The results of present study also showed the beneficial effects of combination of chloral hydrate plus diazepam as a sedative agent during ABR testing compared with the uses of chloral hydrate alone, this combination led to increased in numbers of sedated children, increased in number of children that completed ABR, decreased in numbers of children that required chloral hydrate re-dose but this beneficial effect was associated with longer staying time at ABR center. Diazepam not affects automated behavior recognition in animal model study as documented by Van et al, study [28] so; diazepam was selected in the present study during auditory brainstem evoked response.

Interestingly, no reported recent studies documented the uses of diazepam as sedative agent during auditory brainstem evoked response in newborns and children, but other benzodiazepine types were used like, intranasal midazolam compared with chloral hydrate, where 0.5 mg/kg of midazolam lead to significant sedation but; chloral hydrate was more potent than intranasal midazolam regarding successful sedation, rapid recovery and onset of sedation [29]. Previously, diazepam administration was used as sedative agent during auditory brainstem evoked response since; it not affects ABR amplitudes [30]. Moreover, Schweder et al, study revealed that diazepam, midazolam and flunitrazepam were not affecting the mid-latency auditory evoked potential (MLAEP) that reflect the brain cortical processing of auditory stimuli during ABR testing [31], thus benzodiazepine is more preferred than general anesthetic agents during ABR recording since; general anesthetic agent affects ABR wave and temporal precision response at brainstem neurons causing a significant delayed in transitory of sensory information from brainstem toward cortical and sub-cortical brain neurons [32], thus; benzodiazepine effect on ABR recording is a drug selective since; GABA receptors at auditory pathway showed extra-ordinary response due to differences in GABA-A subunits when alpha and gamma subunits are expressed differentially so; the pharmacological effect of benzodiazepines at GABA receptors are different [33] recently, modulation of GABA activity may affecting the glutamatergic neurotransmission seeing as GABA counterbalance the glutamate at NMDA receptors [34].

Moreover, Nobre et al, study revealed that GABA receptors play a vital role in the auditory evoked potential since; anxiety and fear during ABR testing is represented by wave V that generated by inferior coliculus of auditory pathway that contains a high density of GABA receptors so; diazepam was effective in reduction of anxiety and induction of sedation during ABR testing without effect on the sensory information processing [35]. Diazepam bind to benzodiazepine receptors that increase chloride ions conduction across the neuronal cell membrane; led to hyper polarization of neuronal membrane potential, reduced excitatory postsynaptic potential through inhibition of glutamate release at hippocampal area [36]. As well, acute dose of diazepam leads to significant reduction in brain derived neurotophic factor which play a role in activation of NMDA receptors since; enhancement of glutamatergic neurotransmission causing anxiety and induction of fear [37]. Therefore, all of these studies may explain the sedative effect of diazepam during ABR testing.

Moreover, chloral hydrate combination with other CNS depressant agent have been trailed, Maheras and Gow study, revealed that administration of chloral hydrate 200 mg/kg plus 375 mg/kg of tribromoethanol provides optimal anaesthesia for sixty minutes with minor effects on ABR wave's thresholds and latencies [46]. Recently, Reynolds et al, studies illustrated that single intranasal dexmedetomodine is superior to oral chloral hydrate regimen or combination of chloral hydrate plus dexmedetomodine for induction of sedation during ABR recording [47, 48]. On the other hand, not all combination is of value during ABR testing regardless of sedation effect, since many anaesthetic and sedative agents may affect ABR wave amplitudes since, ketamine-xylazine combination lead to significant prolongation in wave latencies and wave amplitude [49], thus; chloral hydrate in spite of suboptimal anaesthetic effects it preserve waveforms of ABR so; it recommended alone or in combination with other agents during ABR recording.

We would like to give deep thanks for Dr. Hayder sarhan in Department of ENT in Al-Yarmook teaching hospital for his great cooperation in collection of children with hearing disorders and evaluation of sedative levels during study protocol; additionally we give our appreciation for all parents and relative of children for their cooperation.