Abstract: Lagos Harbour (a Lagos lagoon axis) serves as a route for goods transportation, coupled with proliferation of urban and industrial establishments. The socioeconomic activities within has often led to the introduction of substantial wastes, marine debris and spills into the harbor. In an attempt to monitor the pollution status of aquatic organisms in the Lagos Lagoon axis, vertical profiling of the trace metal contents was carried out to reveal, the vertical variations in the monthly trends of; Cu, Zn, Pb, Cr, Mn, Ni, and Fe between August and October,2014.Chemical analysis was carried out in the Nigerian institute for oceanography and marine research (NIOMR) wet and instrumentation laboratory, using aqua regia digestion methods and 200AA series Atomic Absorption Spectrophotometer. The observed levels of the trace metals shows a decreasing order of abundance; Fe > Cr > Pb > Mn> Ni > Zn > Cu; Fe > Pb > Cr > Ni > Mn > Zn >Cu and Fe > Cr > Pb > Ni > Mn > Zn > Cu for 0.2meters, 2.6meters and 5.2meters respective depth profile. This study reveal a general contamination trends; medium depth (2.6m) > bottom depth (5.2m) > surface depth (0.2m). Higher metal concentrations were observed in October. All observed trace metals except Cu, Zn and Fe exhibit high contamination ratio. The trace metals distributions in the study area are majorly controlled by; precipitations, dilution, anthropogenic activities and Sea/fresh water incursion from the Atlantic Ocean and the adjourning creeks. A strong regulation in the indiscriminate waste dump and a check in the socioeconomic activities in the Lagos Harbour are very essential.

Trace metals such as chromium, cobalt, copper, iron, nickel, manganese, lead, copper and zinc, are elements that normally occur at very low levels (<1000ppm) in the environment (Dara and Rashmi, 2009). Living things are in need of a very small amount of these trace metals, as high concentrations can become toxic. They are present in seawater in trace concentrations, whereas excessive concentration can affect marine biota, pose risk to consumers of sea food and change the physical and chemical characteristics of the water [1]

Pollution cases such as sewage sludge, wood burning / log transportation, feacal disposals, oil tankers transportations, landfill site, vehicular emissions, sand dredging, and agricultural effluents have been reported in the Lagos lagoon [2,3,4]. The continuous growth in human population and materials consumed in Lagos have led to the generation of substantial wastes of unprecedented quantities which are no more mere nuisance, but toxic and hazardous to the environment [5].

Although Lagos harbor (an extension of the Lagos lagoon axis) figure 1, serves as a seaport and centre for recreational sailing, it has also been regarded as a sink for domestic and industrial wastes [6]. However, there is paucity of information on the extent of pollution resulting from coastal activities such as marine debris deposition, oil contamination, ships/commercial boating spills, naval vessel discharges, dredging, sitting and construction of socio-economical activities within the Lagos harbor[7-10]; hence it becomes imperative to continually monitor the pollution status of the Lagos Lagoon axis. This paper therefore aims at assessing the vertical variations in the concentration of some trace metals: Pb, Mn, Zn, Cr, Fe, Ni and Cu in the study area and also seeks to examine their sources and environmental consequences.

2. Description of the Study Area

Lagos is situated in south-western Nigeria on the West Coast of Africa and is undoubtedly the commercial nerve-center of Nigeria. Geologically; it falls within the eastern part of the Dahomey Basin, bounded to the north by then Precambrian Basement complex of southwestern Nigeria. It is bounded by the Gulf of Guinea to the south and eastward by the Okitipupa ridge [11]. The harbour (figure 1) situated in Lagos is Nigeria's most important seaport and the first inlet from the Atlantic Ocean, beyond the Republic of Benin[12]. It is one of the three main segments of Lagos Lagoon Complex; other segments are: Metropolitan and the Epe Division Segments. It is 2 km wide and receives inland waters from the Lagos Lagoon in the north, and from Badagry Creek in the west. Oil depots are located along the shore of western parts coupled with the proliferation of urban and industrial establishments on the shore of eastern part. NIOMR jetty station (Latitude 6º 25´ 14, 88º N, Longitude 3º 24´ 24, 42º E) is located in the commodore channel of Lagos harbour with Jetty facilities awaiting rehabilitation. Subsistence fishing takes place at this part on the water body by artisanal fishermen [13]. 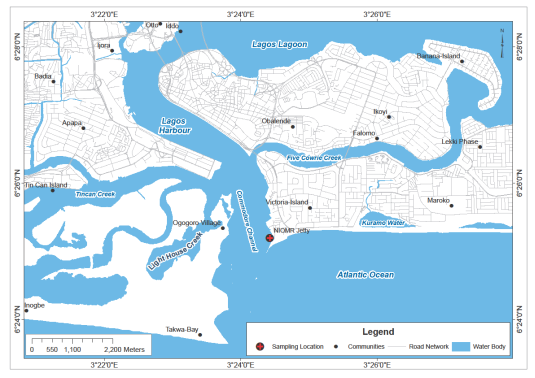 Surface water samples from the Nigerian Institute for Oceanography and Marine Research Jetty, henceforth termed NIOMR Jetty were collected with the aid of 500ml container at about 0.2m depth. Water samples at 2.6 meters and 5.2meters depth were collected with the aids of 1dm3, 0.1meters diameter water sampler attached to a graduated rope of 10meters long. Samples were collected from August to October 2014.The samples were acidified with 2 to 3ml of nitric acid (HNO3) in pre-cleaned l litre plastic containers at the sampling point so as to ensure that the respective ions remain in solution pending analysis. Trace metal contents (Pb, Cr, Cu, Ni, Fe, Mn and Zn) in the respective depth profiled were analysed with argillent 200 A model, Atomic Absorption Spectrophotometer (AAS), after the samples had been digested with Nitric/Hydrochloric acid (1:3), aqua regia using standard digestion procedure [14]. The results obtained from the analysis were subjected to various contamination ratios and standards to ascertain the metal’s natural or anthropogenic enrichment in the NIOMR Jetty water body.

The sampling point was inaccessible at a certain time (late August and mid September) during the sampling period due to high precipitation and tidal fluctuations.

All descriptive statistics and graphs were executed using Statistical 7 software and Microsoft office Excel 2010. Data were further subjected to Correlation test to find significant relationship between the measured variables at 0.05 levels of significance

The Pollution load index (PLI) is a result of the contribution of several trace metals and it is defined as the root of the ratio of concentration factor to the number of heavy metal. PI = Root ∑ (Heavy metal concentration in water/ (Tolerable level)/Number of Heavy metals [18,19].Values of PLI = 1 indicate heavy metal loads close to background, and values above 1 indicate progressive pollution [20].

Correlation Matrix was employed for the data set to discover similarities in geochemical behaviour and basic relationship among the trace metals [21]. Correlation coefficient measures the strength of a linear relationship between two variables on a scale of -1 (perfect inverse relationship) through 0 (no relation) to +1 (perfect sympathetic relation). The correlation coefficients developed for trace metals in the study area was based on 21 samples (7 samples each of 0.2meters, 2.6meters and 5.2meters depth) and it’s significant from 0.5 at 0.05 confidence level see table 4.

Scattered plots were plotted for those metals showing some reasonable level of correlations and (see fig 3-5).

Cr contamination is majorly associated with effluents from leather and textiles productions [22]while, Ni and Pb have been reported to be associated with effluents from electroplating, batteries storage, land disposals, sewage sludge, paint and dyes, effluents from crude oil transportations, fertilizers and vehicular emissions [22,4]. These effluents are traceable to solid wastes, allochtonous deposits and marine debris such as high and low density polythene, empty cans of food/pesticide sprays, glass bottles, used car tyres, worn clothes and a host of others that moved alongside sea hyacinth in the NIOMR Jetty point. These features were highly conspicuous in early October (plate1). Marine debris has contributed to the high level of pollutants found virtually around the harbour and this is in agreement with past researchers [7,23]. However, most of these wastes are non-biodegradable and continuously leach heavy metals into the water body [9].

Judging from the monthly variation in the trace metal concentration, there is an observed higher concentration in Cr, Mn and Pb in October. The high trace metal concentration in the month is attributed to reduced rain events (towards the end of wet season) and increased fresh water incursions from adjourning creeks and Badagry Lagoon; this is in agreement with the assertion by past researchers [24,25]. The dilution from floodwater and the introduction of allochtonous material prevalent in October and high rate of tidal fluctuations(sea/fresh water incursion) which has been reported to have a tremendous influence on the coastal waters of the Lagos harbour (experienced in late September-early October) may not be unconnected to the high concentrations of Cr, Pb and Mn. This is also in agreement with the work of past researchers [26; 27-29] that affirmed that the dilution and enriching effects of floodwater governs the biota distribution of the Lagos harbour.

The low abundance of Cu and Zn may be as a result of uptake, and their low pollution index tends to relate them to background values (fig 8).However, Zinc shows a non-significant positive correlation with Mn(very high CF values), this factor can be reliably linked to a dilution in the background concentration of zinc metal. This same factor can be adduced for Copper (low CF) which exhibit a strong correlation with Pb(very high CF).

The percentage contributions of the toxic metals (Cr, Mn, Pb and Ni) to pollution index are shown in fig 9, 10 and 11.The peak percentage contributions of Cr (42%) at the 0.2meters profile, Pb (39%) at 2.6meters and Cr (48%) at 5.2meters is in agreement with the calculated pollution index ratios (PI), degree of contamination (DC) and the descending order of the trace metal concentration in the NIOMR Jetty (see table 1&2).

Iron, copper and Zinc were not used in the contamination degree and pollution index calculations based on relatively high natural concentrations of Fe metal in marine water and sediments; it is not expected to be substantially enriched from anthropogenic sources [30] and the low CF values of the latter. 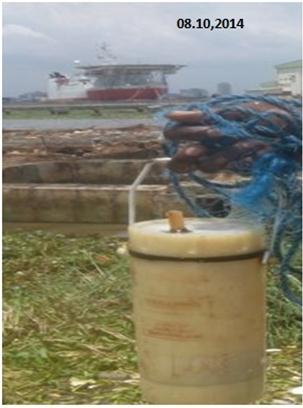 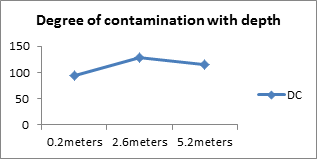 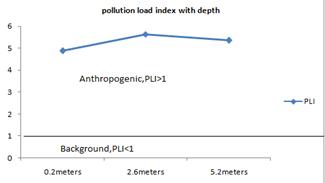 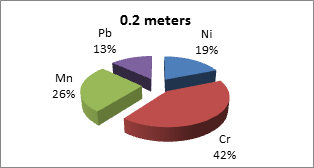 Fig. 9. Percentage of toxic metal contributions to the pollution index in the surface depth (0.2meters) at the NIOMR Jetty. 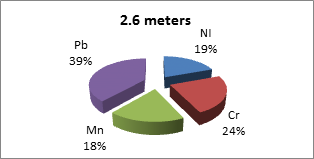 Fig. 10. Percentage of toxic metal contributions to the pollution index at the depth (2.6meters) at the NIOMR Jetty. 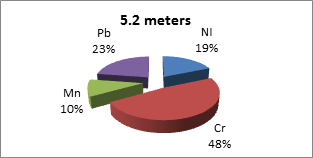 Fig. 11. Percentage of toxic metal contributions to the pollution index at (5.2meters) in the NIOMR Jetty.

Fresh/seawater incursions, anthropogenic effluents, precipitations, allochtonous deposit from marine debris, tidal fluctuations and mixing (ocean surge) are among the factors that control the concentrations and cycling of trace metals around the Habour. The highest contamination of toxic metals at the medium depth profile (2.6 meters) asserted the dominance of mixing and dilution in the NIOMR Jetty.

A strong regulation in the anthropogenic activities (indiscriminate dumping of sewage and domestic waste) in the Lagos Lagoon axis is highly essential. Though dredging is inevitable to maintain sufficient water depth in shipping channels and harbors, which are continually filled in by deposition.

This project is in progress and will be beneficial if it’s extended to other Lagoons, adjourning creeks and Nigerian continental waters so as to further expose the vertical distributions and natural/anthropogenic pathways of trace elements in these axes.

The author acknowledge the Head of department, Physical and Chemical oceanographic section of the Nigerian Institute for oceanography and marine research, Victoria Island, Lagos, Nigeria, Dr Unyimadu John Paul, for his innovations, quality guidance and assistance in the course of doing this project.