Abstract: Essential oils and other extracts of plants have evoked have been screened for their potential uses as alternative remedies for the treatment of many infectious diseases. In this context, the aim of this study was to investigate the antibacterial activity of the essential oils from Cinnamon, Thyme, Clove and Geranium against four strains of Gram negative bacteria and two Gram positive bacteria. The in-vitro antimicrobial effects of these essential oils was determined by the disc diffusion method. The Minimum Inhibitory Concentration (MIC) was evaluated by using the broth serial dilution method and Minimum Bactericidal Concentration values (MBC) were defined as the lowest concentration of sample which resulted in ≥99.9% kill of the initial inoculum. The antibacterial effect was deemed bactericidal or bacteriostatic depending on the ratio: MB/CMI. Cinnamon possesses an important antimicrobial activity against all tested microbes, with the inhibition zones ranging from 26 to 32 mm. The essential oils of thyme and Clove showed the antibacterial activity with inhibition zones at 16–22 mm and 16–20 mm, respectively. However, the Geranium essential oil failed to inhibit any of the tested strains. Both gram-positive and gram-negative bacteria were resistant to this essential oil. Results according to the MICs and MBCs revealed that the essential oil from Cinnamon showed the most remarkable bactericidal effect. The essential oil from Cinnamon might be exploited as natural antibiotic for the treatment of several infectious diseases caused by the pathogens germs and conservation agents in the food.

Essential oils have been used medicinally in history. Medical applications proposed by those who sell medicinal oils range from skin treatments to remedies for cancer and often are based solely on historical accounts of use of essential oils for these purposes. Indeed, interest in essential oils has revived in recent decades with the popularity of aromatherapy, a branch of alternative medicine that claims that essential oils and other aromatic compounds have curative effects.

Emerging resistance of microorganisms to conventional chemicals and drugs has prompted scientists to search for novel sources of biocides with broad-spectrum activities [1]. The antimicrobial activity of Essential oils (EOs) has long been recognised and they have been extensively tested in vitro against a wide range of pathogenic bacteria and fungi [2]. Some oils have been used in cancer treatment [3]. Some other oils have been used in food preservation [4], aromatherapy [5] and fragrance industries [6].

The main constituents of essential oils –mono- and sesquiterpenes including carbohydrates, phenols, alcohols, ethers, aldehydes and ketones – are responsible for the biological activity of aromatic and medicinal plants as well as for their fragrance. The mechanism by which the essential oils exert their antimicrobial activity is poorly understood but the main target appears to be the cell membrane of bacterial cells [7].

Essential oils such as cinnamon, thyme, clove and geranium have been traditionally used by people for various purposes in different parts of the world. In this context, the aim of the current study was to investigate the in vitro activity of these essential oils against four strains of Gram negative bacteria and two strains of Gram positive bacteria.

Four essential oils obtained from Morocco society phytonutrition (table 1). These oils were selected based on literature survey and their use in traditional medicine. Quality of the oils was ascertained to be more than 98% pure.

Table 1. Essential oils and their components.

Four strains of Gram-negative bacteria [Escherichia coli (ATCC 25922), Klebsiella pneumoniae (ATCC 10031), Pseudomonas aeruginosa (ATCC 27853), Salmonelle spp] and two strains of Gram-positive bacteria [Streptocoque de groupe D and Staphylococcus aureus (ATCC 25923)] were used in this study. The cultures of bacteria were maintained in their appropriate agar slants at 4°C throughout the study and used as stock cultures. Mueller–Hinton agar (MHA) and Mueller–Hinton broth (MHB) were used in this study

The disk diffusion method was used in the present study. An overnight culture for each microbial strain was adjusted to 0.5 McFarland standards (108 CFU/ml). 500 μL of the suspension were spread over agar plates containing Mueller Hinton Agar (MHA).

Under aseptic conditions, empty sterilized discs (Whatman 6 mm in diameter) were impregnated with 10 μL of pure essential oil and placed on the agar surface. The inoculated plates were incubated at 37°C for 18-24h. Antimicrobial activity was evaluated by measuring the zone of inhibition (mm) against the test organisms. Each assay was repeated 2 times.

For the determination of the Minimum Bactericidal Concentration (MBC) values of the essential oils, a total of 20 μL from clear wells of the MICs test were plated on Mueller- Hinton agar (MHA). MBC values were defined as the lowest concentration of sample which resulted in ≥99.9% kill of the initial inoculum.

The antimicrobial activity of four essential oils against a range of six bacterial species is summarized in Table 2. These results relieved that the Cinnamon oil exhibit the higher activity antibacterial against all microorganisms tested, with inhibition zones ranging from 26 to 32 mm. The highest antibacterial activity showed in Pseudomonas aeruginosa (32 mm), and lowest inhibition effect observed in both Streptocoque group D and Salmonelle spp (26 mm).

Depending on the susceptibility of the tested bacteria, Clove essential oil produced an inhibition zone varying from 16 to 20 mm, the lowest inhibitory zone was observed against

E. coli (16 mm) but the highest inhibitory zone was showed against Salmonelle ssp and Staphylocoque group D (20 mm), of same clove has no antibacterial effect on K. pneumoniae.

Results according to the MICs and MBCs of each essential oil against microbial strains studied are showed in Tables 3 and figure 1. In this study Cinnamon oil exhibited the antibacterial activity with MIC and MBC values of 2.5-5 mg/mL and 2.5-10 mg/mL respectively. The lower MIC was showed in Escherichia coli and Klebsiella pneumoniae but the higher MIC was observed in Salmonelle spp, Pseudomonas aeruginosa, Streptocoque group D and Staphylococcus aureus. On the other hand, the lowest MBC value was observed in Klebsiella pneumoniae and the highest MBC value was observed in Staphylococcus aureus.

The essential oil from Clove possessed MIC at 2.5-5 mg/ml. and MBC at 5–10 mg/ml. The lowest MIC and MBC are showed in Escherichia coli, Salmonelle spp and Streptocoque group D, but the higher MIC and MBC observed in Pseudomonas aeruginosa and Staphylococcus aureus. 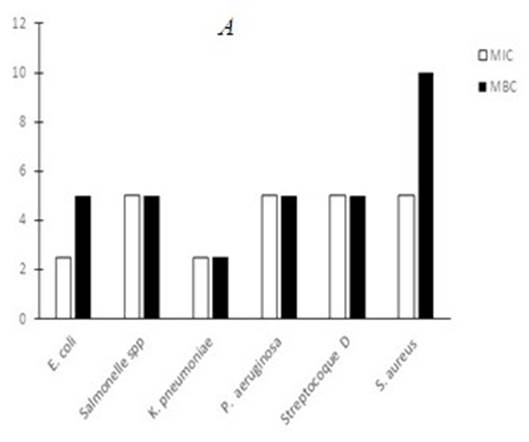 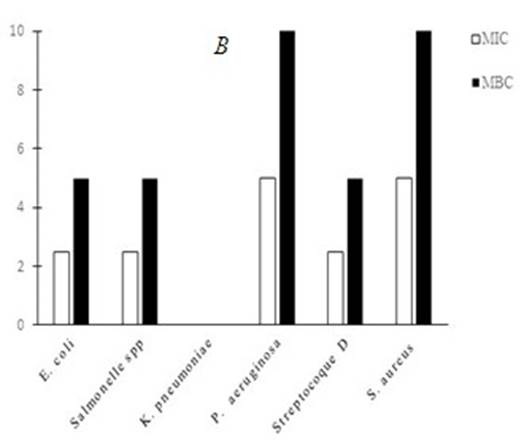 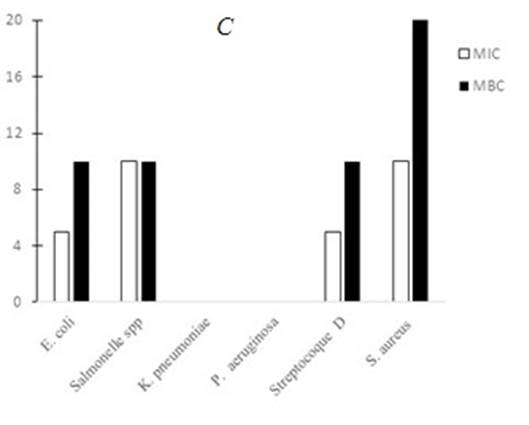 Thyme oil possessed MIC in the range of 5-10 mg/mL, while its MBC was at 10-20 mg/ml. The maximal MIC value observed in Salmonelle spp and Staphylococcus aureus, but the minimal MIC value showed in Escherichia coli and Streptocoque group D. The lower MBC values found for Thyme essential oil showed in Escherichia coli, Salmonelle spp and Streptocoque group D, but the higher MBC values are showed in Staphylococcus aureus.

From the obtained ratio, MBC/MCI (Table 3), it can be noticed that the essential oils from Thyme and Clove showed bactericidal effect against bacterial species tested except K. pneumoniae and P. aeruginosa for Thyme. and K. pneumoniae for Clove. The essential oil from Cinnamon showed a bactericidal effect against both Gram-positive and Gram-negative bacteria,

In vitro studies in this work showed that the essential oils from Cinnamon, Thyme and Clove exhibited the antibacterial activity against microbial strains studied, but their effectiveness varied. Numerous studies have been published on the antimicrobial activities of plant compounds against many different types of microbes, including food-borne pathogens [9,10].

The cinnamon essential oil showed the strongest antibacterial activity against all the bacterial species tested. Results of the present study are in harmony to those carried out by [16], that Cinnamon oil exhibited strong activity against the selected bacterial strains.

Minimum inhibitory and bactericidal concentrations (MIC, MBC) for the three selected oils (Thyme, Clove and Cinnamon) ranged from 2.5 to 10 and 2.5 to 20 respectively. In particular, the essential oil of Cinnamon possesses an important antibacterial effect against both Gram-positive and Gram negative bacteria with MIC and MBC values of 2.5 to 5 and 2.5 to 10 mg/ml respectively. Smith-Palmer et al.[17] reported the reduction of L. monocytogenes from 6.0 log CFU/g to less than 1.0 log CFU/g in low and high fat cheese with low concentration of Clove essential oil.In the other hand, several studies have shown that Cinnamon, Clove and rosemary oils had strong and consistent inhibitory effects against various pathogens [18].

Many studies showed that the activity of the oils could be attributed, to characteristic of essential oils and their components is their hydrophobicity, which enable them to partition the lipids of the bacterial cell membrane, disturbing the cell structures and rendering them more permeable [19,20]. Extensive leakage from bacterial cells or the exit of critical molecules and ions will lead to death [21].

From this study it can be concluded that cinnamon oil has the most potential bactericidal properties. This essential oil might be exploited as natural antibiotic for the treatment of several infectious diseases caused by the pathogens germs. We believe that the present investigation together with previous studies provide support to the antibacterial properties of cinnamon.