Abstract: Antennas are one of the main components of every wireless telecommunication system. With wideband antennas for on-body applications, there are some additional features that should be considered including radiation and physical size. In this paper, we presented a wideband omnidirectional slot antenna with a reflector element improvised under the feed line in order to minimize the impact of body on the antenna. Curiously, this reflector element allows for directionality of the antenna. In the following sections of the paper we will show that less power can penetrate body tissues in the presence of reflector elements; thus, wideband directional antennas are influenced less by human body than omindirectional antenna.

There may not be direct transmission of microwave signals in the human body, because they encounter significant losses there. However, wideband signals may be used for the transmission of narrow pulses with little multipath fading and interference, which are present in signal frequency communication channels. One of the requirements of the on-body installations of communication systems is their low transmission power, so that no adverse radiation effects are incurred on the human body. Consequently, there is a need for the development of wideband antennas with appropriate near and far field radiation characteristics for the on-body application in body-centric wireless communication systems [1-4].

For the installation of lower power transmitter and receiver equipment on the human body or clothing, the near field radiation of antennas inside or in the vicinity of human body should be considered. Also the dissipation of RF power inside the human body should be minimized. Furthermore, the antenna far field radiation should be considered for the communication among the on-body sensors and among these sensors and among these sensors and some nearby equipment (such as a mobile phone or a laptop personal computer). Consequently, the wideband antennas should be designed according to the specified characteristics [2,5,6].

In this paper, we present a novel wideband slot antenna [7-10] for on-body installation, which may be applied in low power communication systems to provide a very low radiation power towards the human body and an appropriate directional for field radiation pattern. The criterion for the wideband impedance bandwidth is SWR<2.5 for the frequency band 6-10 GHz. An appropriate circuit is devised for the impedance matching at the antenna feed. Due to the complex interaction between an on-body antenna and the human body, we use full-wave numerical electromagnetic solvers, such as HFSS and FEKO.

We use the substrate Rogers 5880 with dielectric constant

=2.2, height h=1.6m and loss tangent tanδ=0.0009. Two U-shaped slots are made on the ground plane on one side of the substrate with the dimensions shown in figure 1. The feed line (with characteristic impedance 50Ω) is branched into two symmetrical strips (of impedance 100Ω) on its other side. This feed configuration provides wideband matching for slotted and stacked patches. Such a slot antenna provides an omnidirectional pattern in the XZ plane. In order to reduce the radiation on the feed line side of the antenna, a narrow rectangular conducting plane as a reflector is placed at a distance h from it. 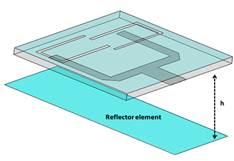 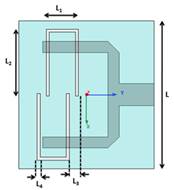 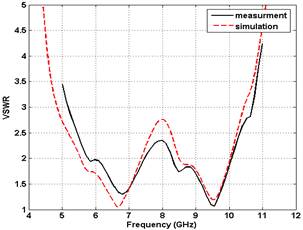 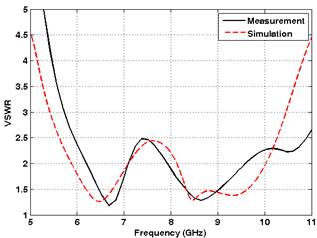 Figure 3. Simulated and measured VSWRs of proposed antenna with the reflector plane. 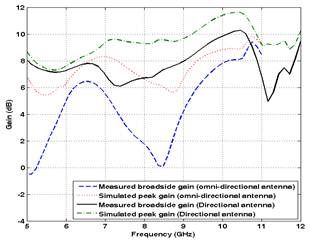 Figure 5. Simulated and measured gain of the proposed antenna.

4. Computer Simulation of the On-Body Antenna

We may consider two simplified models for the operation of the on-body antenna as given in [2]:

Next, place the antenna with the reflector plate on the body muscle tissue. Its SWR is drawn in figure 6(b) and compared with that of the isolated antenna. Based on the figure the SWR versus frequency curve behave similarly at higher frequencies, but are somewhat different at lower frequencies. Curiously, these lower frequencies lie outside the working frequency of the antenna. Consequently, the reflector plate behaves as an effective shield to protect the body against exposure to the antenna radiations. 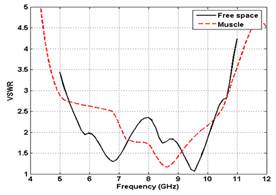 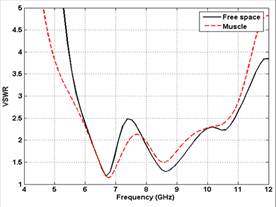 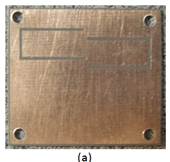 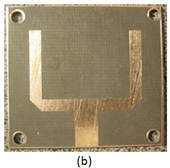